The inflatable display depicts the iconic scene of the lone protestor known only as "tank man" who halted tanks during the 1989 Tiananmen Square protests. 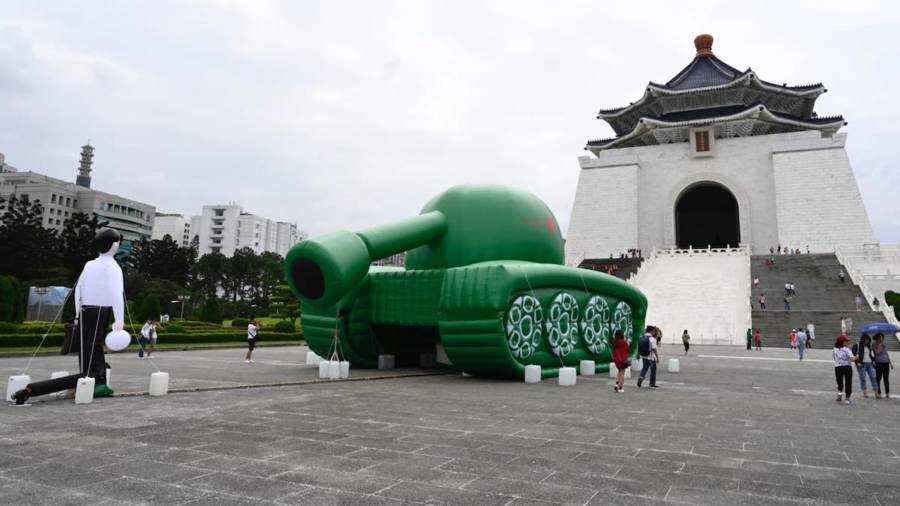 Sam Yeh/AFP/Getty ImagesThe art work is a reenactment of the iconic photograph of a lone “tank man” protestor during the Tiananmen Square protests in China.

It has been three decades since Chinese dissidents were assaulted and killed during a protest at the Tiananmen Square in Beijing, but the emotional wounds from the massacre on unarmed civilians have not been forgotten.

To remember the tragedy, a Taiwanese artist has installed an inflatable tank and balloon man outside Taipei’s busy Chiang Kai-shek Memorial Hall. The scene is a reenactment of the infamous photo from the 1989 protest that depicts a lone protestor standing in front of a row of military tanks sent by the Chinese government to fight off protestors.

“As a Taiwanese I hope I can help China to also achieve democracy one day,” artist Shake who created the inflatable display told Reuters.

The balloons are on full display by the Chiang Kai-Shek Memorial Hall which is one of Taiwan’s most famous landmarks visited by tourists, including those from mainland China. According to Taiwan’s Tourism Bureau, almost 2.7 million Chinese tourists visited the island in 2018.

The artist’s intent is clear as she notes that Hong Kong and Taiwan — both separate nations that China continues to lay claim over — are commemorating the event. In China, mentions of the Tiananmen tragedy are usually subject to government censorship.

“This thing has already been washed away by [China’s] authoritarian political view,” Shake said. Shake’s “tank man” balloon has become an attraction unto its own for curious tourists, many of who pose for photographs with the political artwork.

“I think it is very brave to put it here,” a 21-year-old student admiring the display told Reuters. “I am quite concerned that there could be someone who pops it with a needle at night.” The student called the display a “statement against the Chinese government.”

Despite China’s efforts to wash away the memory of the bloody Tiananmen Square protest, the “tank man” photo that was shot by American photographer Jeff Widener has evolved into an iconic symbol of peaceful protest.

In a video obtained by CNN that captured the incident, the unidentified protestor can be seen walking into the middle of the pathway of large Chinese military tanks, before standing still in front of the lead tank.

The ‘tank man’ protestor halted Chinese military tanks before mounting one of the vehicles.

The man, who appears to be carrying a briefcase in one hand and an unidentified white object in the other, waves his right hand toward the tank, presumably telling them to turn back. The first tank then shifts course and tries to maneuver around the man, but the solo protestor continues to block the tank from passing.

Astonishingly, the protestor then climbs on to the hood of the tank, seemingly looking for a way to get inside the vehicle. Finally, a soldier pops their head out of the tank’s cabin and speaks with the protestor after he has dismounted from the tank. This incredibly courageous encounter goes on for almost three minutes.

The “tank man” protestor was one of the lucky ones that got away with his life intact that day. A declassified cable message that had been sent to the U.K. by the then-British Ambassador to China, Sir Alan Donald, described part of the “atrocities” that came out of the 1989 tragedy at Tiananmen Square.

“The 27 Army APCs [armored personnel carriers] opened fire on the crowd before running over them,” Donald wrote in his cable. “APCs ran over troops and civilians at 65kph [40 miles per hour].”

Shake’s inflatable take on the iconic scene is not the first time artists have voiced their dissent against the Chinese government’s involvement in the Tiananmen square massacre.

In 2016, Chinese artist and cartoonist, Badiucao, conducted a performance in Adelaide, Australia, as an homage to the Tiananmen “tank man.”

“I want to continue the project and expand this art campaign worldwide. This is an invitation for everyone who celebrates and defends universal human rights,” Badiucao said ahead of the 29th commemoration of the protests last year.

The artist even created a guidebook for supporters who wanted to stage their own “tank man” reenactment which featured a list of props and directions to perform the staging.

In addition to displays of art, public events and lectures will be held across Taiwan to commemorate the Tiananmen massacre 30 years ago.