The Tumultuous Efforts To Preserve The World’s Disappearing Tiger Population

The world lost 97 percent of its wild tigers in the past century as aggressive poaching continue to contribute to dwindling populations of this big cat. 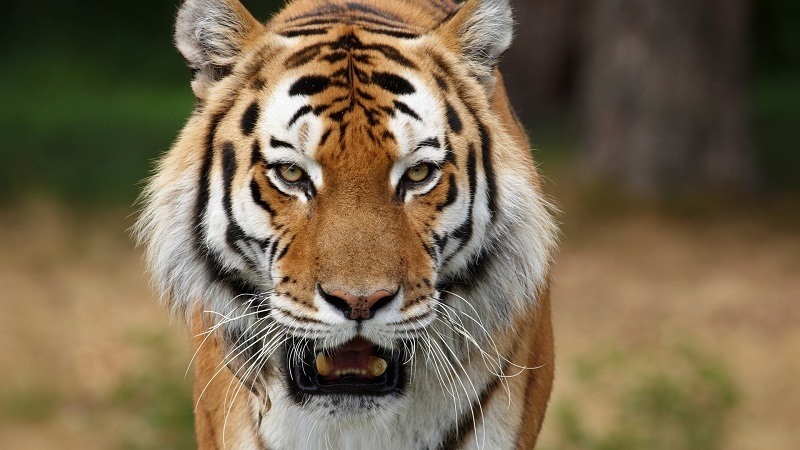 Gallery HipThere are only under 4,000 tigers that exist in the world, both in the wild and in captivity.

Looking at the abysmal numbers of the world’s tiger population today, it is stunning to think that there had been more 100,000 wild tigers roaming Asia and its surrounding areas just a century ago.

Now, only as few as 4,000 tigers exist in the wild which means we have lost about 97 percent of the wild tiger population over the last one hundred years. As with other endangered animals, human expansion, poaching, climate change and illegal wildlife trade have all contributed to the rapid decline of the world’s tiger population. 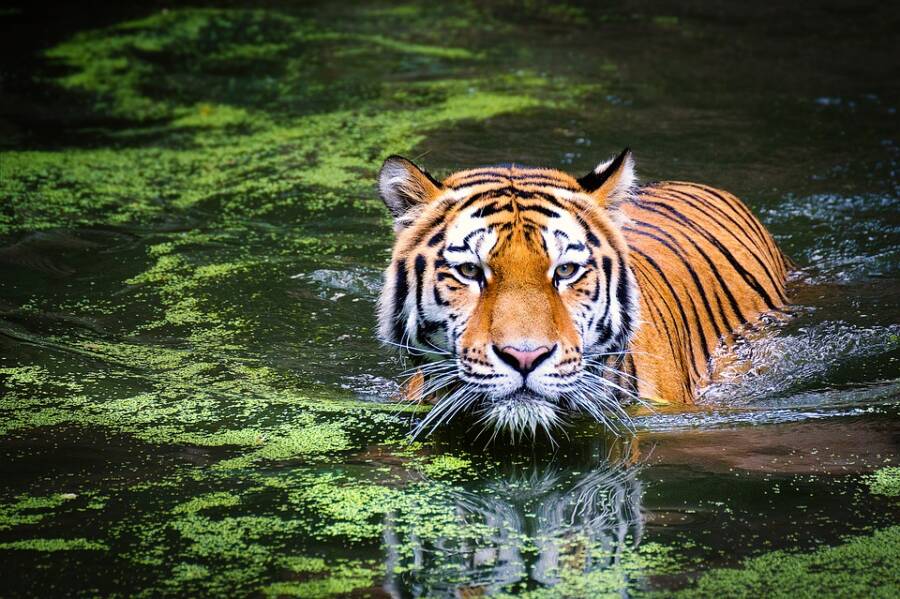 Tigers are majestic animals. Its beautiful black-striped orange fur give them a distinct regal look while their size, strength, and predatory skills place them squarely in the category of “big cats” alongside lions and jaguars. On average, an adult tiger weighs roughly 450 pounds and — on its hind legs — can stand up to three feet tall. Although difficult to discern by the human eye, a tiger’s stripe patterns are actually unique to each individual.

Besides having a beautiful one-of-a-kind coat, tigers are equipped with razor sharp claws and teeth that grow up to four inches long. Tigers are solitary animals which is why they generally hunt alone.

They prefer to go after prey under the cover of the dark night sky, outrunning its prey before lunging its teeth into the victim’s throat to kill it. It’s crucial for a big predator like the tiger to get as much protein as it can so these wild cats can eat up to 60 pounds of meat every night. If it’s a larger kill, tigers will usually take a few days to finish its meal, covering the carcass with leaves and dirt when it’s not feeding.

These solo-living animals are also quite territorial and can sense when they’ve encroached on another tiger’s living space based on the claw and urine markings on the trees. 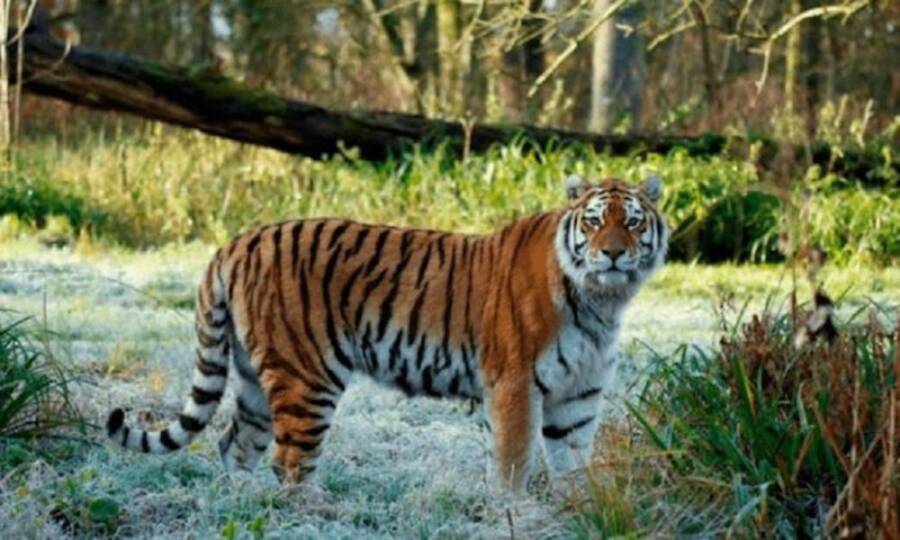 LongleatTigers are territorial animals that prefer to be on their own.

Despite being wildly independent and fierce creatures, the tiger population is incredibly vulnerable right now. There are six subspecies of tigers that exist: Amur, Bengal, Indochinese, South China, Sumatran, and Malayan. While all of these subspecies are flagged as endangered, some have smaller populations than others.

Fewer than 400 Sumatran tigers now exist in the wild, earning this subspecies along with the South China wild tiger population a critically endangered status from the International Union for the Conservation of Nature (IUCN).

The bleak outlook of the tiger population’s future has warranted worldwide conservation efforts by countries where these animals can still be found called the 13 Tiger Range Countries (also known as TRCs). The list of TRCs includes Bangladesh, China, Russia, and Vietnam, among others, and they’ve all come together to form an international alliance that is committed to doubling the number of wild tigers by 2022 under the campaign TX2.

It is a distressing sign of how much human activity has impacted the tiger population that an international call to action is needed to make sure that these animals do not go extinct.

Humans Are The Biggest Threat To The Tiger Population 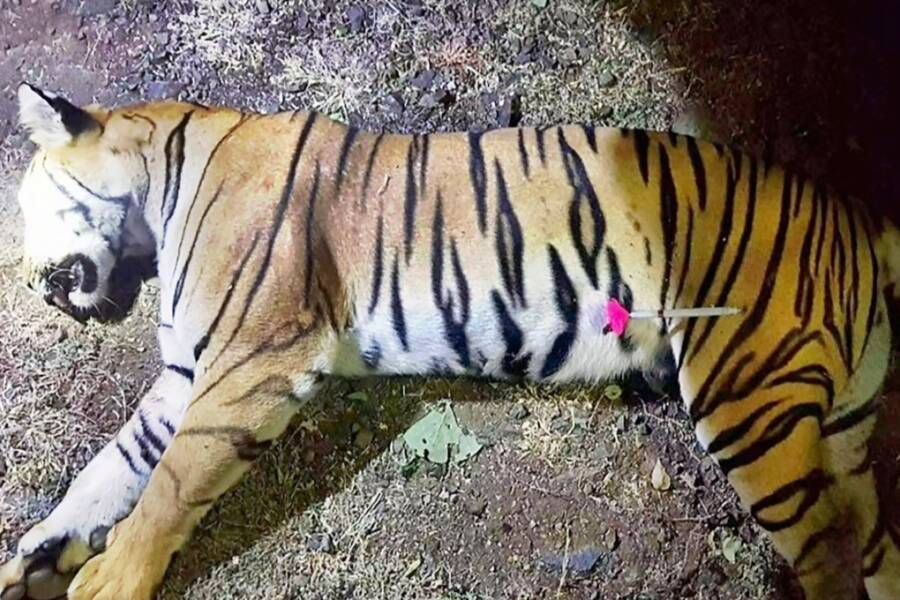 Maharashtra Forest Department/AFP
The body of the tiger known as T1 or ‘Avni’ after being shot dead in the forests of India.

Looking at the tiger’s intimidating gaze, it’s easy to forget that human beings have actually been a bigger threat to the tiger population than they have been to us. In countries with large populations where tigers can be found, like India, the growing encroachment of human populations onto the tiger’s natural habitat has led to deadly clashes between human residents and tigers.

Sometimes, these encounters result in the bloody death of these big cats as residents — fearful of their children or livestock getting eaten by the tiger — will often set out to kill it.

Then, there is the ongoing issue of poaching. In many of the countries that the tiger populates, habitat loss and notoriously high poaching levels have prevented tigers from repopulating. Using a combination of poison, steel traps, electrical currents and firearms, poachers routinely kill tigers, selling the animals’ bones, teeth, and hide to the highest black-market bidder.

Tiger bones are used in a number of expensive traditional medicines that some cultures believe will impart the tiger’s qualities on the person who consumes it. 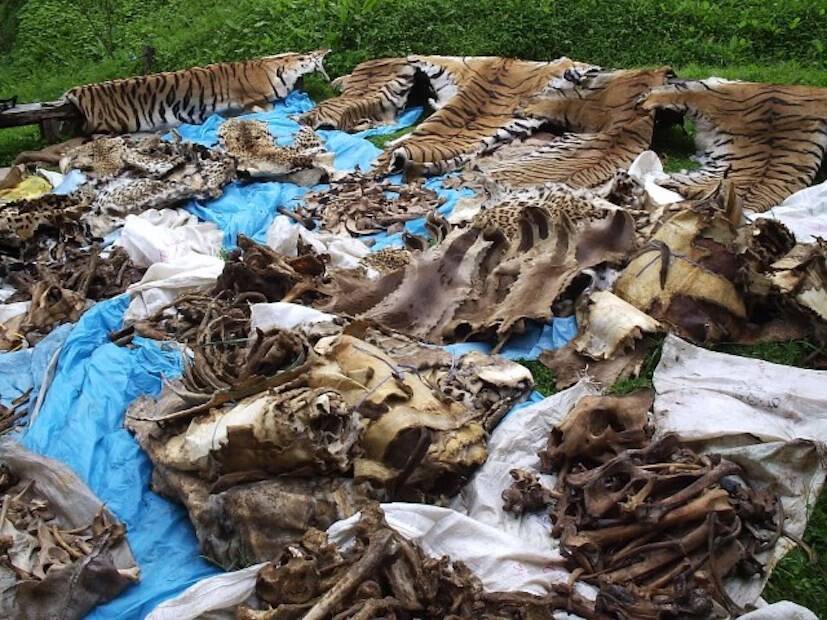 Furthermore, tiger pelts, teeth and bones are all considered luxurious, high-end home decor for the uber-wealthy class sold in the black market across the continent.

By far the biggest buyers of tiger part products is China by way of Laos, Myanmar, and Vietnam. Almost no part of the tiger’s body is safe from the trade; tiger skins are used as ornaments while claws and bones are typically wanted for traditional medicinal brews and tonics.

To eradicate tiger killings, many countries have passed special legislative protections that promise severe sanctions for harming, killing, or poaching tigers. In Myanmar, for example, tigers are protected under the Biodiversity and Conservation of Protected Areas Law, and those find who are convicted of poaching, killing, hurting, collecting and trading tiger parts can face between three to 10 years in prison.

But experts say that the inability to enforce poaching regulations and a cultural demand for tiger products both severely threaten the tiger’s chance for survival. 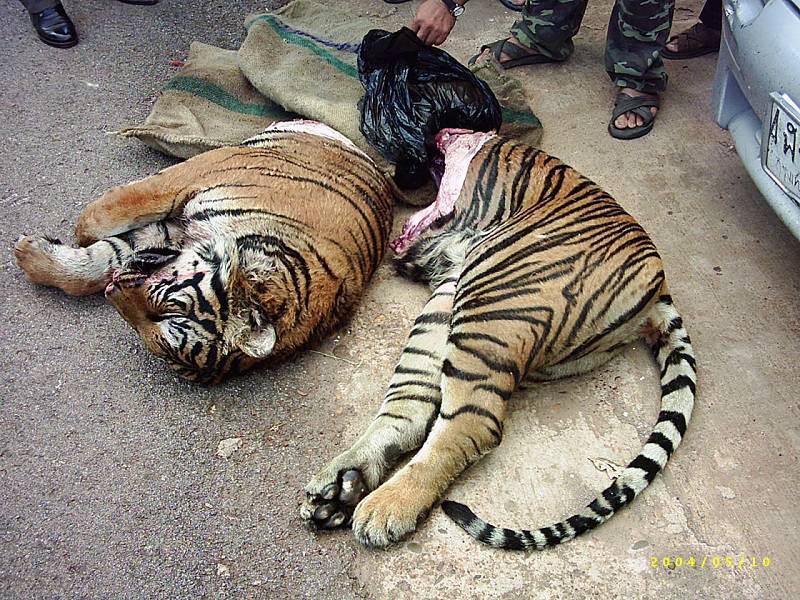 Illegal Animal PoachingSlaughtered tiger before it is cut up to be sold on the black market.

In 2006, the tiger count reached an all-time low of 1,411. The next year, the last remaining tiger in Cambodia was caught on camera. Roughly a decade later, WWF declared tigers to be functionally extinct in Cambodia.

Sensing an urgent need to solve the tiger crisis before it was too late, advocates and governments around the world banded together. In 2014, 140 experts and government officials congregated in Dhaka, Bangladesh, to discuss how they can increase the number of wild tigers in the next eight years.

This particular group of tiger advocates met again in 2010 to discuss each other’s conservation progress and effective methods to prevent the complete annihilation of the tiger population. While a few TRC nations — namely Russia, Nepal and India — were able to increase natural tiger populations in the four years since the last international meeting, other countries have continued to witness their tiger populations dwindle.

Tiger Conservation Efforts Have Been Positive 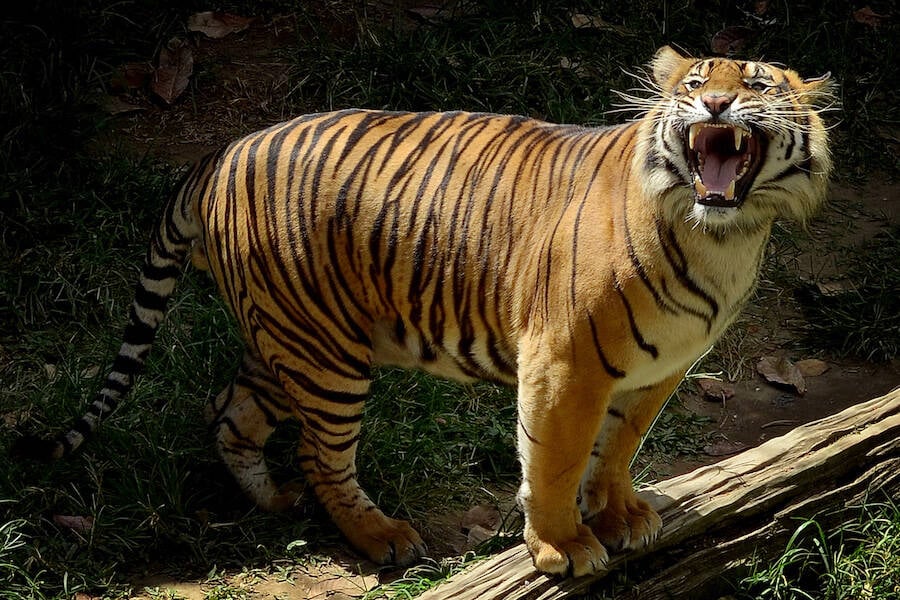 Riau Images/Barcroft Media via Getty ImagesThe tiger population decline is due to large-scale hunting and loss of 93 percent of forests.

While the situation for the tiger population may seem dire, concerted efforts to strengthen tiger conservation has extracted some positive results. As reports of a diminishing environment continue to pour out from scientists, awareness of the need to protect all wildlife, including tigers, has grown.

On July 29, 2010, that date was recognized by the world as International Tiger Day as a way to raise awareness and celebrate the world’s largest species of cats. The ninth International Tiger Day marked a significant occasion as the Indian government announced that it had met its own internal goal to increase the number of tigers living in the country.

According to a national survey, India’s tiger population has increased by a third since 2015, and has now reached almost 3,000 animals. This marked a 33 percent increase since the last survey was performed by India’s National Tiger Conservation Authority (NTCA). Now, India is home to the largest population of tigers in the world. 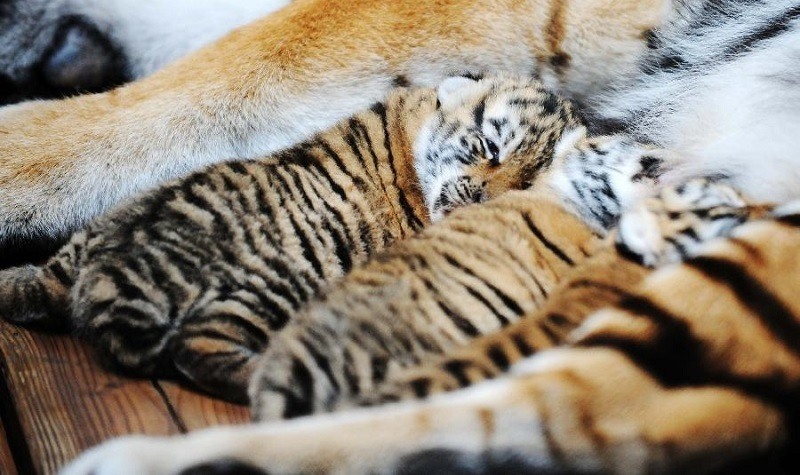 Through the TX2 campaign, advocates have successfully drummed up political momentum to ensure tigers remain a top priority for world leaders.

Wildlife protection has become increasingly professionalized by training rangers and developing guidelines of practice to enforce zero poaching. There are also efforts to develop more spaces where both people and tiger can hopefully coexist peacefully in the future.

Protecting the wild tiger population is extremely important, not only to maintain the ecological integrity of their forest habitats but also to protect other species of animals that are interlinked with the wellbeing of tigers.

In fact, tigers are what is considered an “umbrella species” meaning investing in their conservation is an investment in the conservation of many other species that live in the same area which usually covers up to 250,000 acres of land.

Hopefully, the fruitful progress made by conservation efforts will continue to help protect this majestic creature.

Next, learn the story of the 40 tiger cubs that were found dead at a popular tourist site in Thailand. And then, read how conservation efforts to save the koala are intensifying.