Tim Lambesis, The Metal Singer Who Tried To Hire A Hitman To Kill His Wife

Tim Lambesis of the Christian metal band As I Lay Dying lost his way in 2013, doing the opposite of what any good Christian would do – soliciting the murder of his estranged wife. 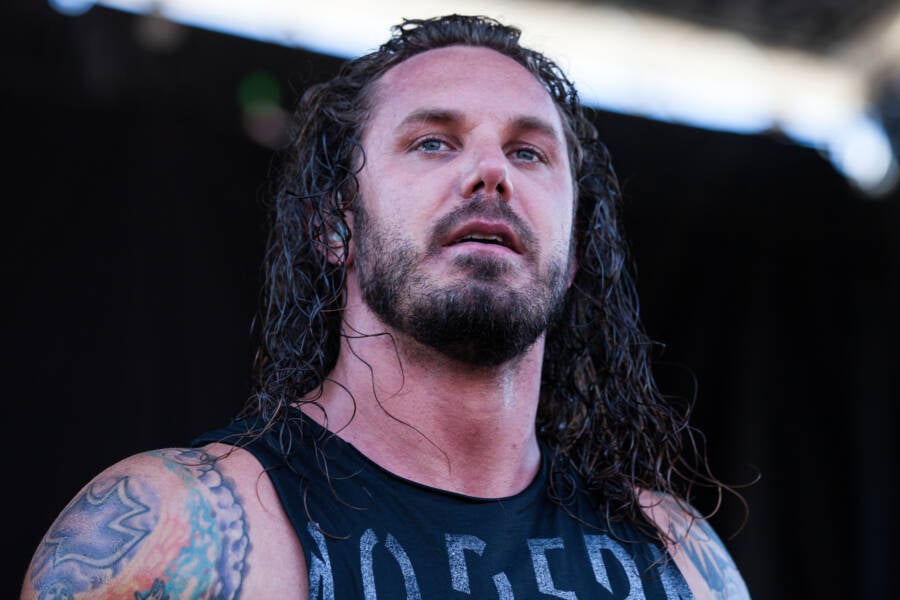 Chelsea Lauren/Getty ImagesTim Lambesis of As I Lay Dying performs at the Rockstar Energy Drink Mayhem Festival on June 30, 2012 — less than a year before he would try to have his wife killed.

In April 2013, metal musician and bodybuilding obsessive Tim Lambesis approached a fellow gym member in an Oceanside, California, branch of Pure Fitness with a bizarre request: He wanted to have his wife killed.

The man may have thought he was joking, but Lambesis was deadly serious. He wanted a hit taken out on his estranged wife, Meggan Murphy. Unfortunately for Lambesis, his gym conversation soon made its way to the San Diego Sheriff’s Department.

Less than a year later, Lambesis was sentenced to six years for paying a San Diego police officer posing as a hitman $1,000 to kill his wife. What had driven Lambesis, the frontman of the massive hard-rock band As I Lay Dying, to try and have the woman with whom he shared children killed?

This is the bizarre story of Tim Lambesis and the hit he tried to put out on his wife. 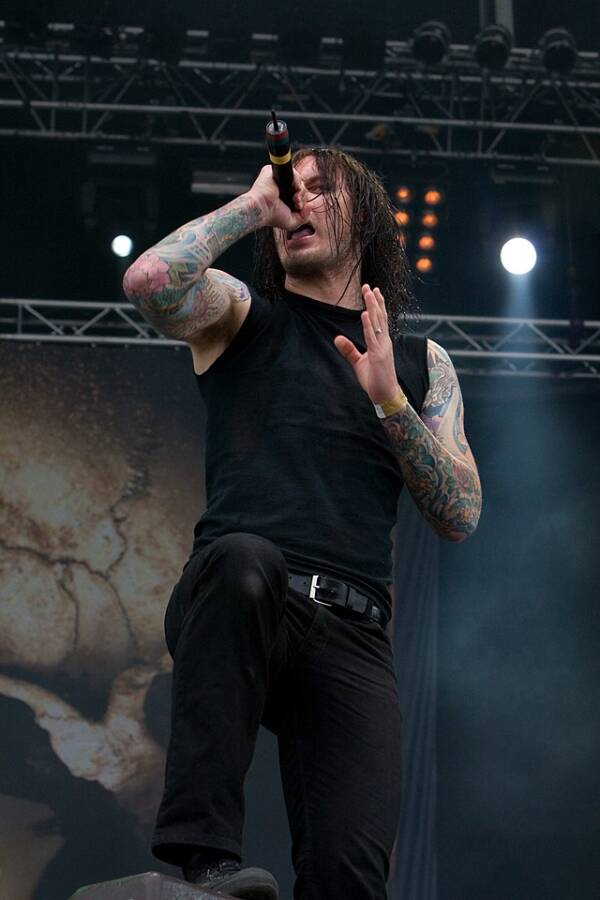 Timothy Peter Lambesis was born on November 21, 1980. He grew up in a religious Christian household, attending Santa Fe Christian High School in Solana Beach, a San Diego County coastal town. Lambesis continued his religious studies at Liberty University before turning to music full time, forming the band As I Lay Dying in 2000 as guitarist and vocalist.

As I Lay Dying’s line-up changed over the years, but they remained a successful band with seven albums to date, their most successful, An Ocean Between Us, peaking at number eight on Billboard’s album chart in 2007.

All professed Christians, the band toured often and Lambesis even created an offshoot spoof band, Austrian Death Machine, that paid tribute to Arnold Schwarzenegger. In June 2004, Lambesis married his wife Meggan and they adopted three children from Ethiopia.

Then in April of 2013, Lambesis made a decidedly un-Christian decision, marking his wife of eight years for death.

In 2012, the heavily muscled Lambesis started making some turbulent life changes, which may or may not have been influenced by his use of anabolic steroids.

Firstly, Lambesis expressed a change of direction in his religious beliefs, taking to his personal Tumblr page to post his thoughts on some of the lyrics from the bands 2012 Awakened album.

Lambesis wrote that although “still inspired” by the words of Jesus, he was increasingly regarding “the god of tradition and ritual that I grew up with as less and less of a probable truth.” Lambesis quoted the book Pagan Christianity, noting that both “Protestant and Catholic denominations have poisonous roots.”

In that philosophical vein, Lambesis emailed his wife Meggan in August of 2012, telling her he no longer loved her or believed in God. Around that time, Meggan later said, according to Revolver, Lambesis also referenced a scene from the 1990 Arnold Schwarzenegger film Total Recall, in which Schwarzenegger’s character shoots his wife and quipping, “Consider this a divorce.”

The following month Meggan Lambesis filed for divorce, saying Lambesis was spending endless hours at a gym obsessed with bodybuilding and spending thousands of dollars on tattoos. According to her September 2012 filing documents, Lambesis had also fallen asleep while watching their three children, who were playing in or near a pool.

Lambesis toured for six months a year and had taken two last-minute trips in a month to see a girlfriend in Florida according to The Independent.

Then, on April 23, 2013, Lambesis posed the fateful question to another gym member.

The next day at the gym to the same person, Lambesis reiterated his intention to have his wife killed. Lambesis’ gym buddy didn’t know of anyone for the job — but the San Diego County Sheriff’s Department sure did.

Caught By An Undercover Cop 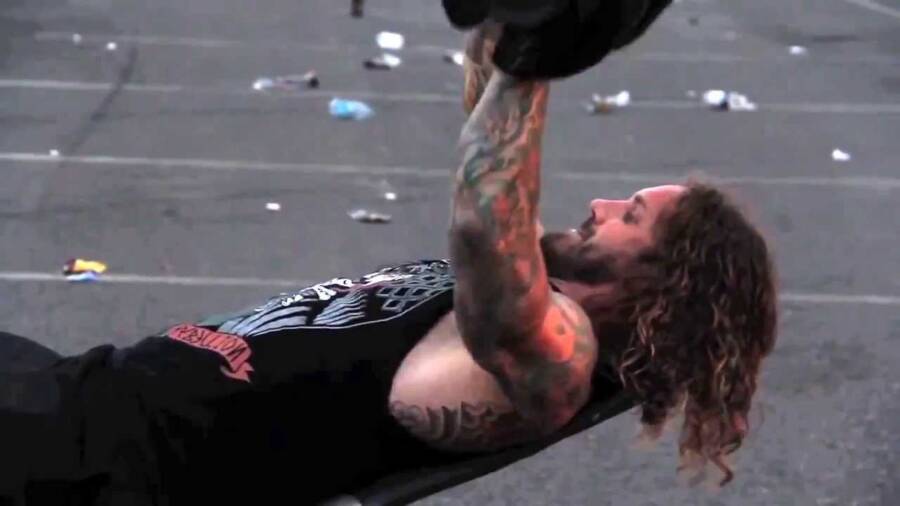 On May 7, Tim Lambesis met with the hitman he thought would murder his wife, an undercover police officer named “Red.”

For Lambesis to be arrested, the undercover officer required him to audibly confirm he wanted his wife killed. After some ambiguous phrases of wanting his wife “gone” and to “never see her again” The officer asked Lambesis if he wanted her dead, and he replied, “Yes, that is exactly what I want.”

Believing his plan was set, Lambesis gave “Red” an envelope containing $1,000 cash for expenses. He also provided his wife’s address, codes to her security system, pictures of her, and specific dates when Lambesis would have their children, and therefore an alibi.

Later that day, the San Diego County Sheriff’s Department told a shocked local public that Lambesis had been arrested in a retail business in Oceanside and charged with the crime of solicitation of another to commit murder.

“The information came to us late last week,” a police spokesperson said. “We acted quickly on it. I believe that we averted a great tragedy.”

Without divulging their intelligence or investigative tactics, law enforcement became aware that Lambesis had asked someone to kill his estranged wife a few days before, and an inter-agency undercover sting operation had been initiated resulting in Lambesis’s arrest.

The news of As I Lay Dying’s frontman allegedly conspiring to have his wife murdered understandably stunned their fans, forcing an official press release from the band.

At a court hearing, the undercover officer provided some insight into Lambesis’ thought process during their interaction. According to the officer, Lambesis was angry that he wasn’t allowed to see his kids, that he wasn’t allowed to take his kids out of the state to go on tour with him, and that his wife would get up to 60 percent of his income in the divorce settlement.

Tim Lambesis Is Given Time To Reflect 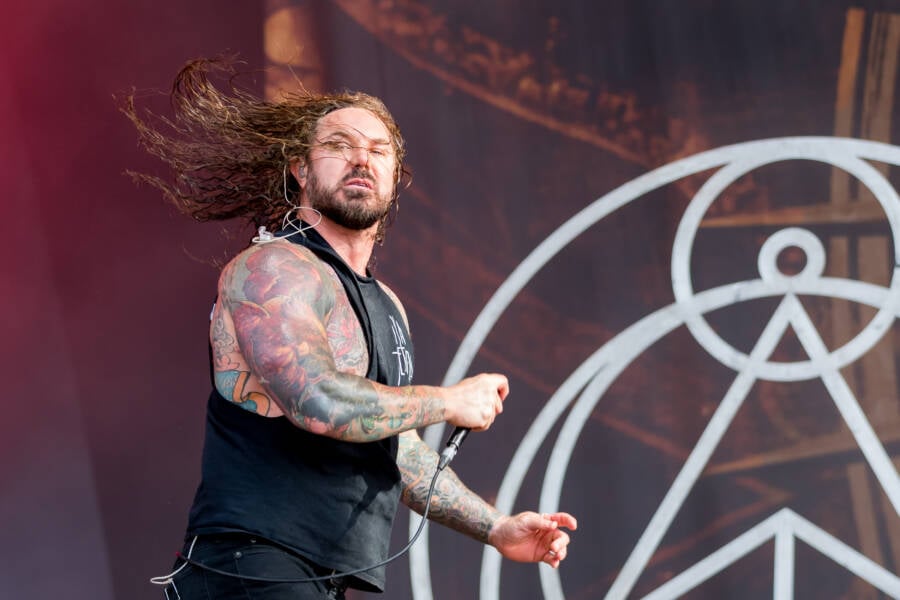 Wikimedia CommonsAs I Lay Dying on tour in 2022.

Tim Lambesis had initially pleaded not guilty, but in February 2014, he changed his plea to guilty. On May 16, 2014, he was sentenced to six years in prison.

His attorney blamed gym culture which led to “changes in his physiological and mental status.” Through supplements, then steroids, Lambesis had bulked up from 170 to 220 pounds.

“He was not the same person,” his attorney said. “He was irritable and lost God.”

His estranged wife and intended target also weighed in at his sentencing, saying Lambesis had become “dangerous,” according to Alternative Press. She also said that the day before Lambesis’ arrest, he had texted her asking for their three adopted children’s social security numbers.

By June 2014, Lambesis had seemingly renounced Christianity and was now an atheist according to The Christian Post, claiming that he and the band members were pretending to be Christian to sell records, a claim another band member called slanderous and defamatory.

Lambesis served two and a half years of his sentence, and on Dec. 17, 2016, was discharged on parole. In 2018, Lambesis rejoined As I Lay Dying and wrote a long apology on the band’s Facebook page. Lambesis also married for a third time in 2022, having remarried in 2015 while in prison.

In October 2022, on The Garza Podcast, Lambesis, now free of any parole requirements, reflected on his shocking 2013 decision to have his first wife killed.

“I don’t really know how to describe it other than I just lost myself, I lost my way. And I sat there in a cell being like, ‘How did I become this person?'” he said continued. “There’s really no defense or no way to take away what I did other than that, thankfully, there was actually no true physical harm of any kind.”

After learning about Tim Lambesis, read the unbelievable story of the undercover Black cop who joined the KKK. Then, learn about the horrifying death of undercover DEA Agent Kiki Camarena.