"Being in a sub, and being nice and cozy, and having a hot chocolate with you, beats the heck out of freezing and going through a two-hour decompression hanging in deep water."

As the launch date of the highly anticipated “Titanic tours” approaches, more details of the unique underwater tourism experience have surfaced.

The tours, operated under private exploration company OceanGate, will bring passengers aboard their high-tech submersible Titan 13,000 feet under the sea to view the Titanic’s wreckage. And a seat on the extravagant voyage into the deep now goes for $125,000 a head. The price went up from $105,129 — the cost of a first-class ticket on the Titanic, adjusted for inflation.

Officially named the Titanic Survey Expedition, each dive or “mission” is a 10-day experience that includes pre-expedition workshops, gear, training and coaching with underwater experts, and accommodations and meals aboard the support ship.

According to Smithsonian Magazine, there will be three dives per expedition, and on each descent (which takes about 90 minutes each way), three clients will be accompanied by a pilot and a scientist or a historian to recount the wreck’s history.

Each dive will involve roughly three hours of free time to explore the wreck during each six-hour dive. Civilian passengers called “mission specialists” will co-mingle with biologists, marine experts, and more within a crew size of 40 people per mission, with nine of those including citizen explorers.

The mastermind behind this attraction is OceanGate Founder and CEO Stockton Rush, a former investment banker with an aerospace degree from Princeton who’s obsessed with deepwater dives. Rush was inspired to create submarine tours after he realized that he could capitalize on the experience and comfort that is offered by going into the ocean and exploring its body in an airtight vessel with a viewport.

“Being in a sub, and being nice and cozy, and having a hot chocolate with you, beats the heck out of freezing and going through a two-hour decompression hanging in deep water,” Rush told Smithsonian Magazine, comparing the experience of riding a submersible vehicle to going diving.

The problem was that submarines were not a popular choice for tourist vehicles, but Rush argues that they’re perfectly safe.

Before his dreams of creating the perfect underwater commercial submarine for tourism, there were fewer than 100 privately owned submarines in the world. Almost all submarines are government-owned.

In a study that Rush commissioned, researchers found there was a big appetite for “participatory” adventure travel to the deep ocean. So Rush decided to create expeditions to historical sites underwater. The new submarine technology would serve a multipurpose function of science exploration, disaster response, and resource speculation. 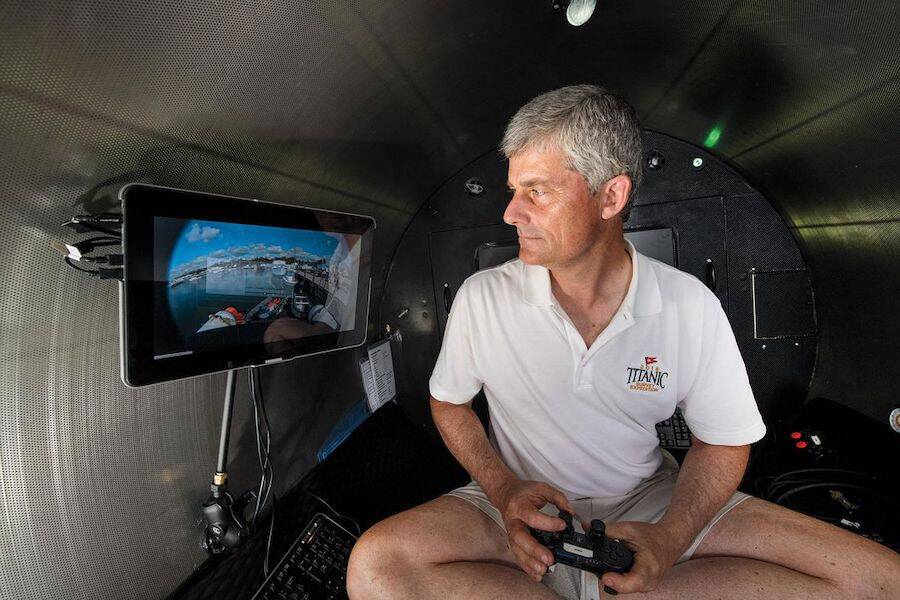 Rush and a business partner teamed up in 2009 to form OceanGate and have since led many successful underwater expeditions — including some to other iconic shipwrecks, like the Andrea Doria, an Italian boat that sank off the coast of Nantucket in 1956, and the SS Governor Cobb, an American vessel that sank in 1921 off the coast of Washington state.

Soon, they began to experiment with carbon fiber. The material is lightweight and extremely strong, and is typically used in aerospace engineering. The first successful model, Titan, is an affordable yet lightweight submarine dressed in a sleek and modern design. The carbon fiber itself is supposed to be strong enough to withstand the enormous pressure that would engulf the underwater vehicle at a depth of 13,000 feet.

Last December, the team finally began manned tests, with Rush first dropping 650 feet to the so-called “thermocline,” where ocean temperatures fall considerably. After successful dives further down to 3,200, 6,500, 9,800, and finally 13,000 feet Titan was deemed ready to plunge to the depths of the Titanic ruins.

That final test dive made Titan the first privately owned sub with a human aboard to successfully reach 13,000 feet.

But the historic feat has not been without challenges. Although the Titan had been set to make its debut with a premiere voyage on June 28 launching from St. John’s in Newfoundland, they have been slightly hampered by Canadian maritime law prohibits foreign-flag vessels for commercial voyages. Norwegian-flagged MV Havila Harmony was poised to be used as the supporting ship for Titan’s missions. But Harmony’s operators feared their ship might be impounded if the mission went forward, so Rush decided to postpone the expedition’s launch until 2020.

“I’ve been up in my life, and I’ve been down in my life,” Rush said. “It’s been quite a swing, and I hope I don’t ever go through that again.”

Rush said that at least 75 percent of the company’s clients who already paid for their seats on the Titanic expedition were willing to wait another year. Now, Titan is set to be shipped from its deep-sea testing area in the Bahamas back to Seattle to conduct further tests. They will also be reviewing every detail of next year’s launch of the Titanic Survey Expedition to prevent a repeat of the recent delay.

“We’re reassessing,” Rush said. “Do we need to buy our own ship?”

Next, take a look at 33 photos of the Titanic before and after its sinking. And then, discover five sunken ships that are even more astonishing than the Titanic.