Tom Otterness sculpted some of New York's most famous subway art, but little do commuters know he has a sordid history. 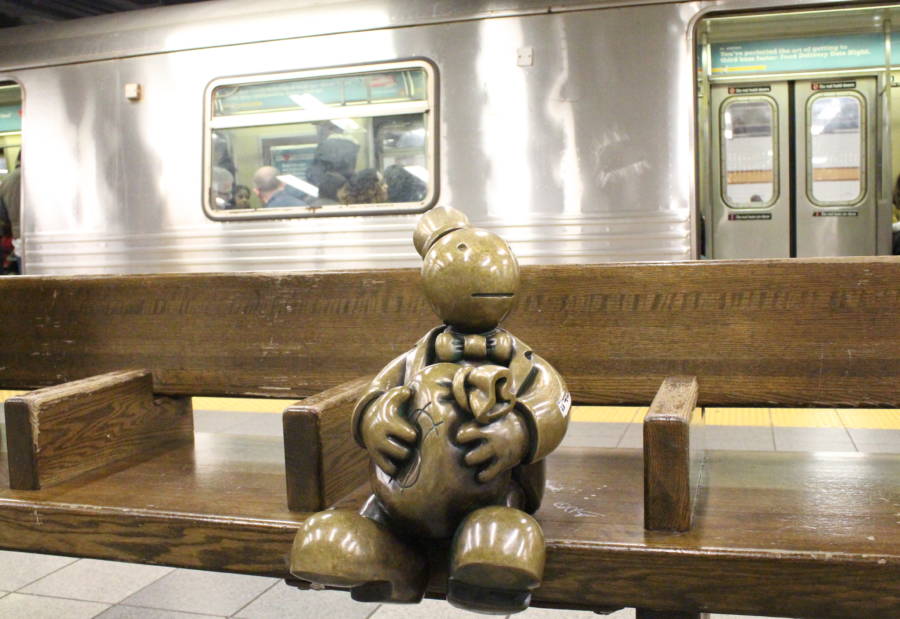 Tom Otterness adopted a dog from a New York City shelter in 1977. Shortly afterward, he shot the killed the dog in the name of art.

Aptly named Shot Dog Film, Otterness was 25 when he made it. When asked why he shot an innocent dog, the famous public artist said, “It was in the context of the times and the scene I was in.”

Many animal rights activists said there is no excuse for what he did. Supporters of the artist say that millions of animals are euthanized every year, and one dog doesn’t make a difference.

The artist himself said he tries to make up for his youthful error with every piece of art he makes, saying, “I have spent the years since then living with my mistake, and trying to bring joy into the world through my public art.”

Although some people took Otterness’ words to heart, not everyone agrees that he is remorseful. One thing is certain: his work is everywhere despite the controversy.

Tom Otterness was born in 1952 and grew up in Wichita, Kansas. He moved to New York City in 1970 to work on his dream of becoming a professional artist. He joined the Arts Students League and earned a coveted spot in the Whitney Independent Study Program in 1973. Otterness’ first major work was an avant-garde show in Times Square in 1980.

Since that time, thousands of his sculptures have appeared in major cities throughout the world. Anyone can see his sculptures in New York, St. Louis, Greensboro, Miami, San Francisco, Cleveland, Wichita, and Portland, Oregon. Internationally, people view his work on display in Cologne, Germany; The Hague, Mexico City, and Valencia, Spain.

His adoptive home of New York is where Otterness is most popular. At the subway station on the corner of 8th Avenue and 14th Street, he created more than 130 bronze sculptures for the revitalized station in 2001.

“I thought, this is one area where I’m pitching to a certain class of people. The class of people that takes the subway, and I can talk about the above-ground class system there underground. Everything is broken down into moneybag-head rich people, working-class people, white-collar workers, blue-collar workers, [and] cops. So, I went back into the history of making the subway, and that led me to Thomas Nast and to political cartoons, sort of the corruption that was in the city at the time.”

“Often, I try to make the sculptures into visitors, like we are. They walked in, they’re taking a break on the chair or in the corner. I love watching people go an handle it, stand on it, take pictures with it. The moneybag head guy on the stairs going up to 14th Street is high polished now from thousands of people coming through and touching it on the way to work.”

That subway station alone sees around 40,000 visitors every day and more than 14.5 million commuters yearly, so many, many people know Otterness and his work. He was so thrilled to do the project, he went above and beyond his commission. 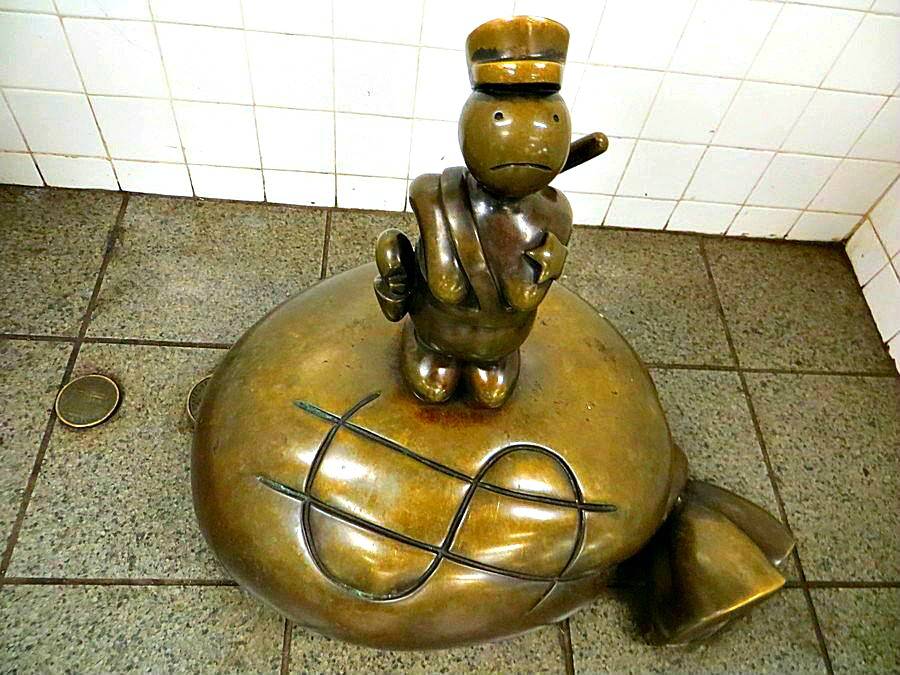 “I ended up giving four or five times what I was commissioned to do. I just got so excited I donated more and more work to the system and in my view nothing didn’t fit, everything seemed to have a place.”

His favorite is a rat eating a money bag. Otterness earned $200,000 for his bronze sculptures.

In the film, he rescued a dog from a shelter, tied it to a fence, and shot it dead. He played the film on a loop at a gallery show. The film even showed up on cable television.

Otterness began apologizing for his “inexcusable act” in 2008 when public outcry began threatening his commissions. 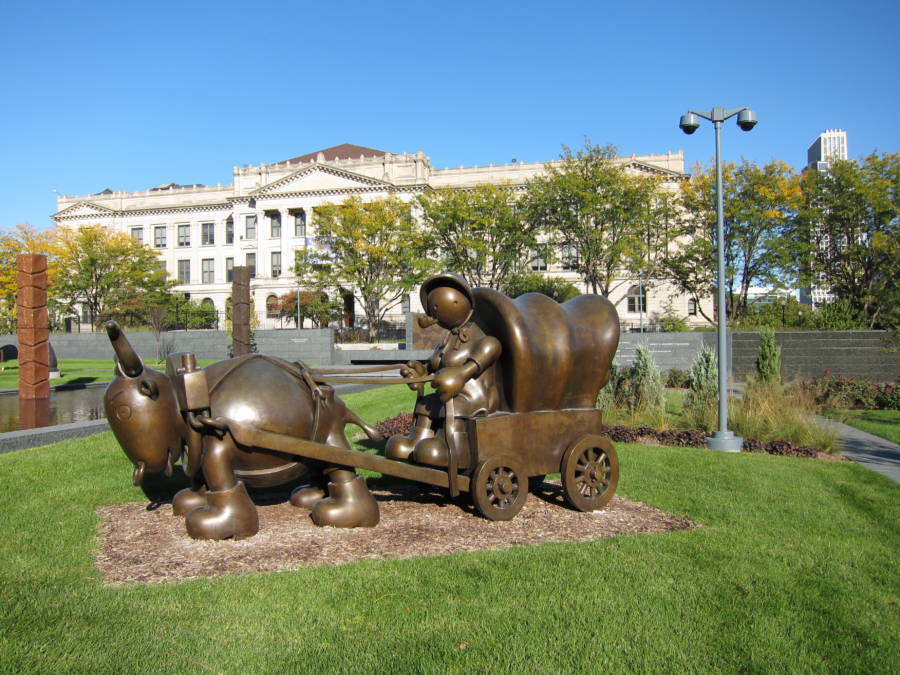 Flickr/edward stojakovic This covered wagon is at Joslyn Art Museum.

Of the dog film, Otterness has also called it “an indefensible act that I am deeply sorry for,” and that it was the culmination of “convoluted logic,” and something he filmed out of “anger at myself and at the world.”

The sculptor claimed he was a “young artist having a very rough time” in 1977. He also stated, “Many of us have experienced profound emotional turmoil and despair. Few have made the mistake I made. I hope people can find it in their hearts to forgive me.”

Not everyone is buying those excuses.

In 2011, both New York and San Francisco canceled or cut back on public art sculptures created by Otterness. In San Francisco, he was to design 59 bronze whimsical bronze sculptures for a subway station as well as a sculpture for a hospital. That project would have earned him $750,000. 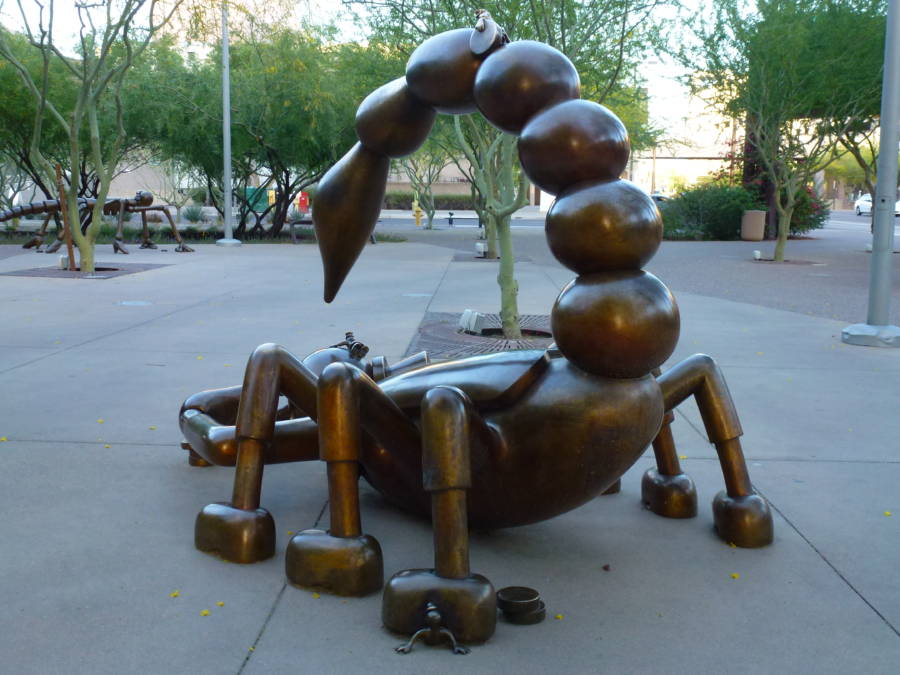 Even if the days of Tom Otterness’ public bronze sculptures come to a close, it shouldn’t hurt his bottom line too much. He makes millions in private commissions.

After learning about the dark story behind Tom Otterness’ famous subway art, read about the time New York’s subway was a crime-ridden hellscape. Then, check out these vintage photos of New York City before it became what it is today.