When French explorers first set up trading posts near Lake Ontario, this tree was already a sapling. 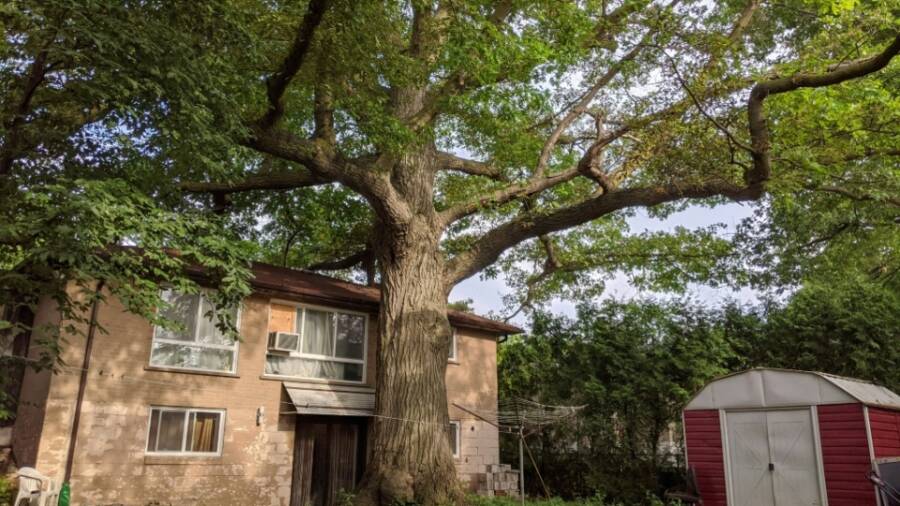 AFPA campaign to save a 300 to 350-year-old Northern Red Oak tree in Toronto has been stalled by the pandemic.

Amid the quiet landscape of North York, Toronto, towers an impressive Northern Red Oak tree. At roughly 80 feet, the natural landmark is estimated to be over 300 years old, making it older than Canada itself. It is also believed to be one of the oldest trees in Toronto — and for the last 14 years, a small group of locals have been trying to protect it.

“It’s the Rolls-Royce of heritage trees,” said Edith George, a long-time resident of North York who has been advocating for the tree’s protection.

According to local news outlet CTV News, the tree has long been famous in the local community, having sprouted back when French explorers first set up a trading post on the nearby shores of Lake Ontario.

These days, the tree has grown close up against the back of a house dating back to the 1960s. The home’s current owner, however, is worried that they will be unable to provide the tree with the necessary maintenance as it continues to grow and encroach on the property. The tree boasts a circumference of 16 feet and branches as long as 78-feet. Its gargantuan roots have even begun to crack the house’s foundation. 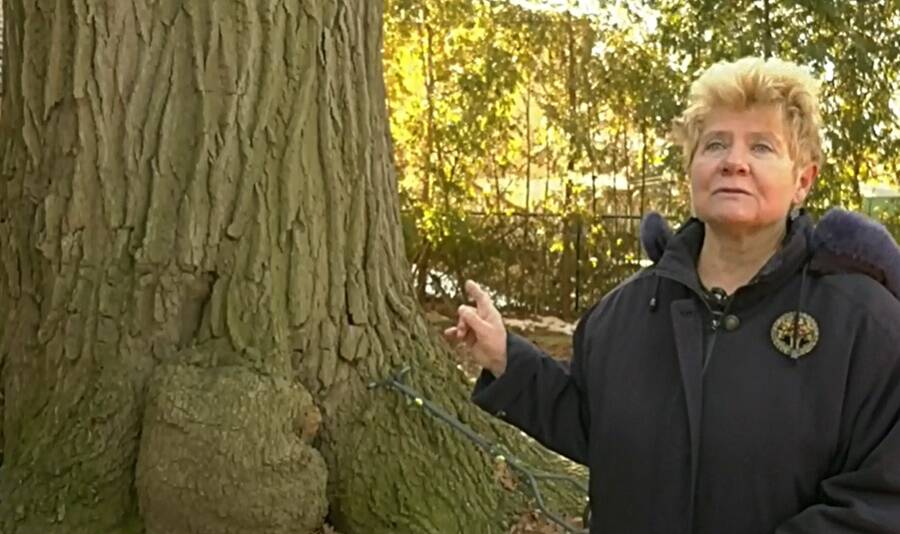 Screengrab from CTV NewsLongtime resident Edith George says meditating by the tree has helped her through rough times.

“A tree like this is expensive to maintain. If the lot is a public space, the city will be able to take care of it better than I can,” said Ali Simaga, who purchased the home in 2015. “I don’t want to be selfish and keep it to myself, either.”

Besides its historic value and how expensive it is to maintain, many residents have expressed the concern that if not taken care of properly, the tree could fall over and destroy nearby homes. However, experts say that with the right care under the right conditions, the tree could live at least another 200 years.

In response, the city council voted in 2018 to buy out the owner in order to raze the house and establish a local park around the tree, but this effort has been stalled due to the pandemic. 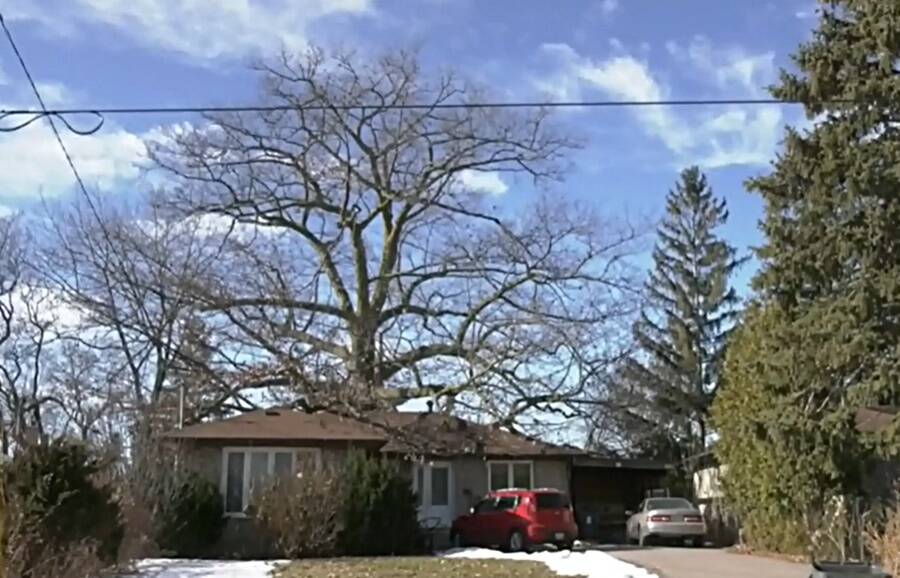 Screengrab from CTV NewsThe tree is about 80 feet tall with a circumference of 16 feet and branches that are nearly as long as its trunk.

Last year, following the city council vote, the city agreed that it would buy the property from a willing Simaga under the condition that private donations from the local community cover half the price of the property. So, residents and advocates like Edith George launched a fundraiser in December 2019. The campaign’s goal was to raise $325,000 by the end of 2020.

The campaign got off to a good start with a generous $76,000 donation from a group of local philanthropists. But when the COVID-19 pandemic hit, donations slowed.

As of mid-July, about $96,000 have been collected, only 30 percent of the city’s goal. If the campaign can’t meet its goal by the end of the year, then the funds could instead go to planting trees across the city, another great use of donations though not so helpful for this historic oak tree in particular.

This isn’t the first time a town has rallied around a historic tree. In Perthshire, U.K., a local community was forced to ask tourists to keep their hands off what could be the continent’s oldest tree, a 5,000-year-old Fortingall Yew.

And in Washington, D.C. last year, locals mourned the loss of a tree that may have been planted by George Washington at his Mount Vernon estate after it was felled during a nor’easter. In addition to that famous tree, Mount Vernon also lost the Virginia Cedar that “stood watch over Washington’s tomb for many years.” 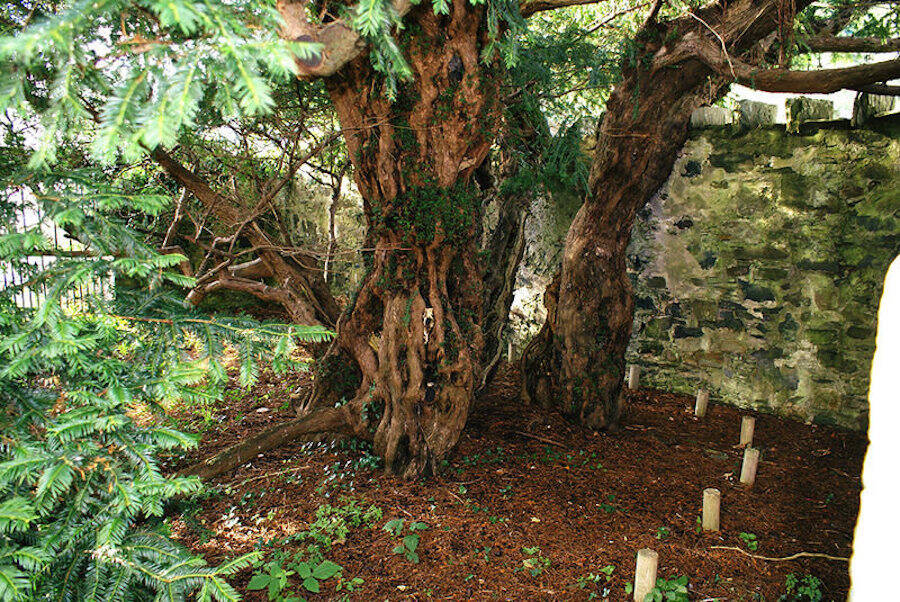 The Northern Red Oak tree in Toronto is located along a former Humber Valley trail that was once used by the area’s Indigenous peoples before it was later coopted by European fur traders traveling between the Ontario and Simcoe Lakes. According to a local historian, the tree was likely already pretty big by the time the town fell to the French in the 18th century.

“It is part of Toronto’s heritage, it is part of Canada’s heritage and it tells the story of our country,” said Manjit Jheeta, director of the City of Toronto Partnership Office.

Indeed, the tree is no doubt a significant landmark. But it is not only admired for its history.

“When bad things happen, I don’t go to church, I come here because this is like my cathedral,” George said of the majestic oak. “It’s a survivor and it gives us hope for a planet that’s in peril.”

Next, discover the mesmerizing shapes of the trees in Poland’s Crooked Forest. Then, meet California’s Methuselah tree, the oldest tree in the world.