Meet California’s Methuselah Tree, The Oldest Tree In The World

The Methuselah tree is so well protected as the oldest tree in the world that its location has remained unknown to the public since its discovery in 1957. 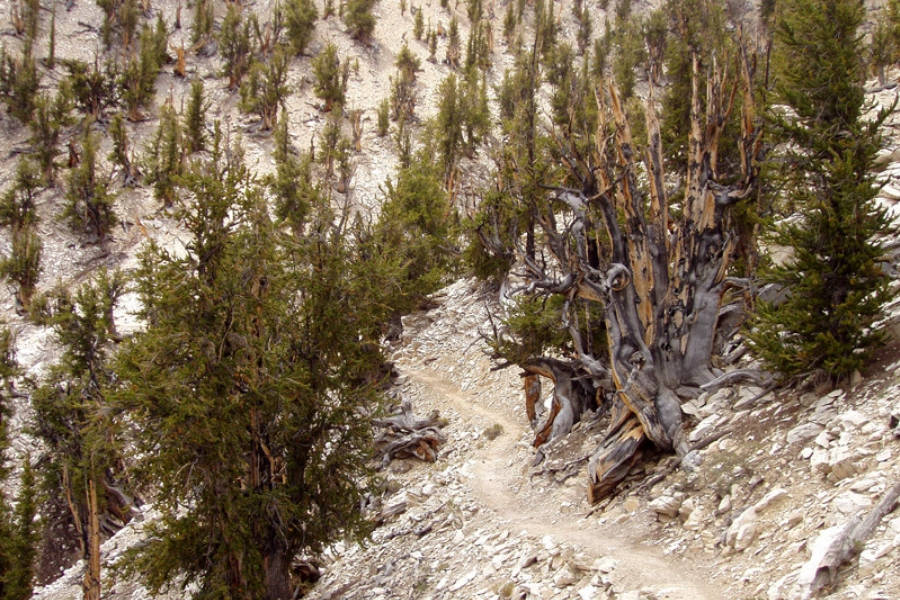 Wikimedia CommonsCalifornia’s Methuselah grove, which is home to the Methuselah tree, widely considered to be the oldest tree in the world. To protect the tree, its location has remained undisclosed, meaning no confirmed photos of it are publicly available.

Deep in the White Mountains of the Inyo Valley in eastern California, at a location that remains secret to this day, lies the oldest tree in the world. Unlike those that surround it, not to mention virtually every other tree on the planet, it has a name: the Methuselah tree.

And at 4,850 years old, the Methuselah tree has certainly earned the secrecy of its location — lest someone harm the oldest tree in the world.

Searching For The Oldest Tree In The World

The discovery of the Methuselah tree was years in the making.

In the early 1950s, a dendrochronologist from the University of Arizona named Edmund Schulman got a tip from a California national park ranger. For the previous 20 years, Schulman had been scouring parks, deserts, and fields for unusual, ancient, or undiscovered trees. Specifically, he’d been looking for climate-sensitive trees, those that showed signs of having been affected by climate change and consequently adapting over the years. 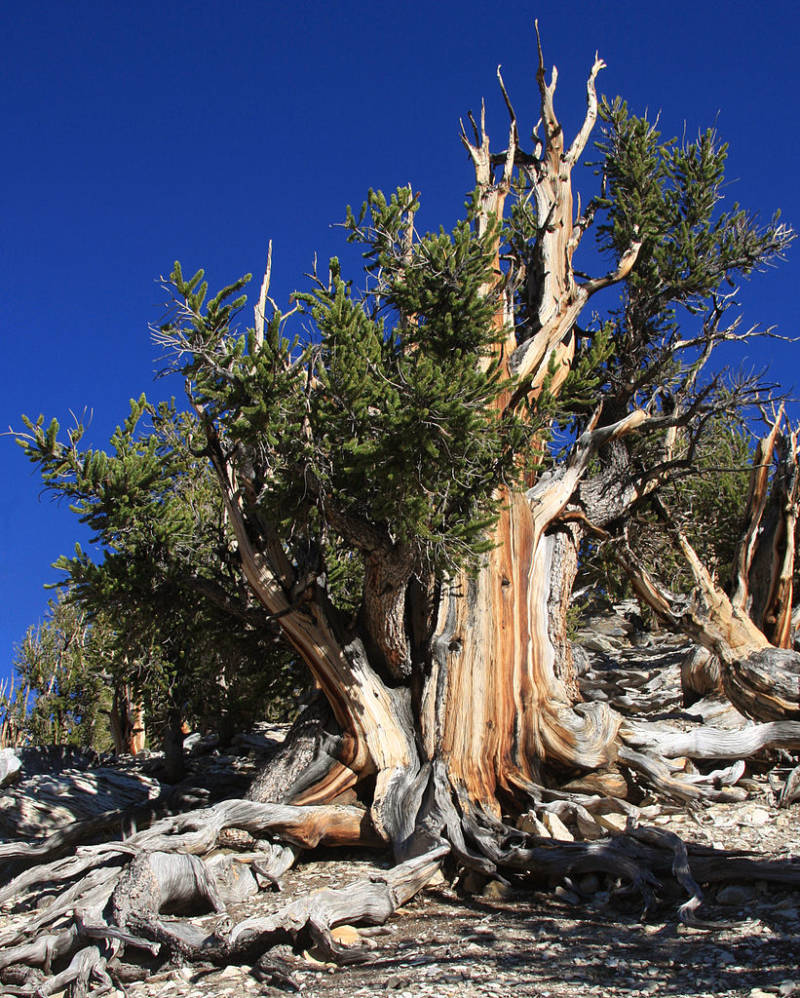 Wikimedia CommonsTrees in the Methuselah Grove, home of the oldest tree in the world.

In 1953, a park ranger from the Inyo National Forest told Schulman a tale of a certain special grove. Deep in the White Mountains of California, the trees there allegedly were thousands of years old. At last, Schulman believed he could unlock the secrets of ancient climate patterns.

On his first venture, Schulman and his assistant climbed 11,000 feet into the White Mountains. They managed to procure a sample from a bristlecone pine. To their shock, the pine appeared to be upwards of 1,500 years old. Dubbed the “Patriarch Tree,” this pine served as the inspiration for the next several years of Schulman’s work. It pushed him to return to the mountains time and time again in search of the oldest tree in the world. 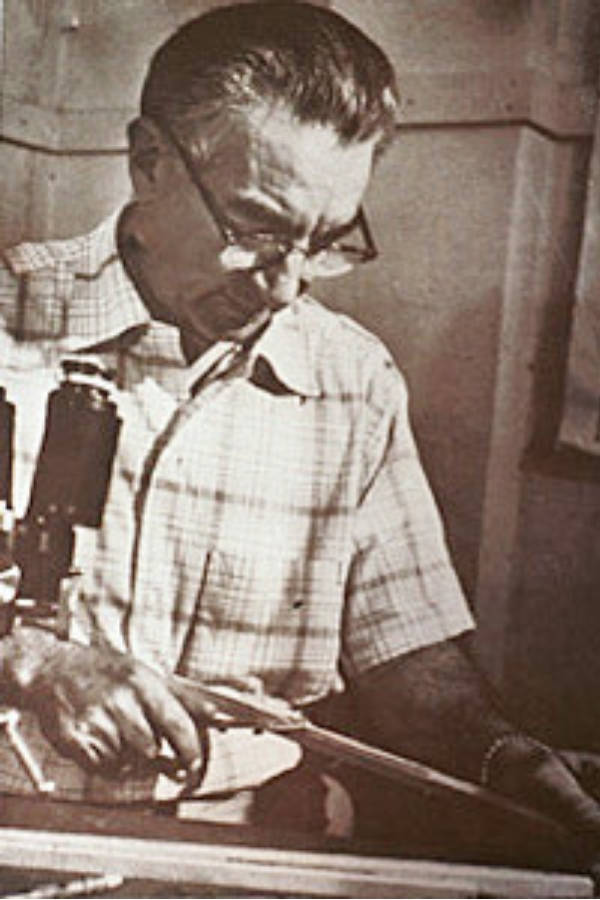 University of Arizona Edmund Schulman, the man who discovered the Methuselah tree.

For the next several summers, the dendrochronologist returned to the mountainside and collected more data. Eventually, he logged samples from trees that proved to be older than he had ever anticipated.

“By 1956, we knew for a fact that we had here trees in the 4,000-year-plus class, incredible though it seemed,” he wrote in a journal in 1957. That year would prove to be the year he discovered the oldest tree in the world. 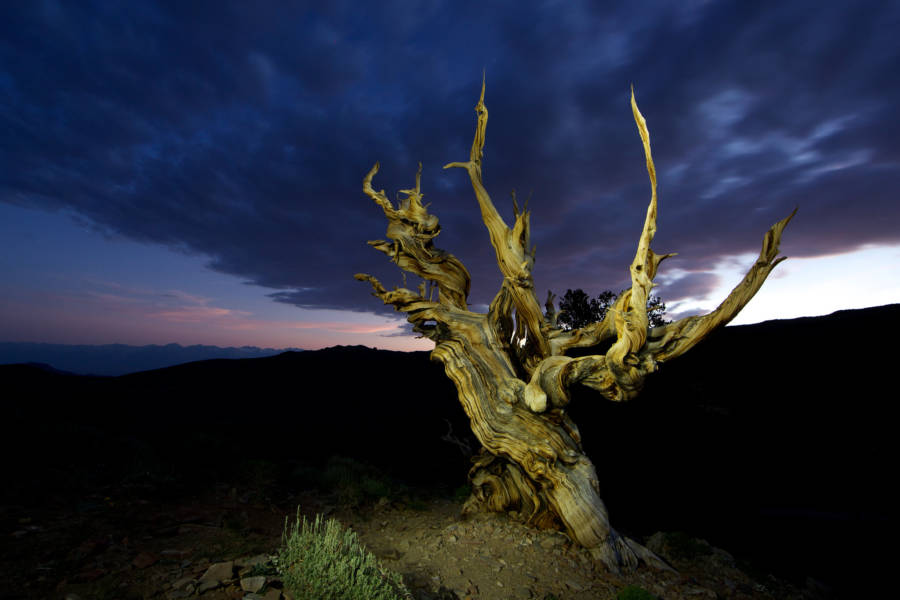 In the summer of 1957, Schulman and his assistant, M.E. “Spade” Cooley, made a magnificent discovery when they stumbled upon a small grove of ancient trees. All of them were upwards of 4,000 years old. Among them, however, one stood out: a tree that clocked in at 4,789 years old, making it the oldest tree on earth.

Schulman dubbed it the Methuselah tree, in honor of the grandfather of the Ark-building Noah from the Bible, who was said to have lived to 969 years old. Now the tree had a name, but its location has remained a secret for decades in the interest of protecting this ancient conifer and those surrounding it. 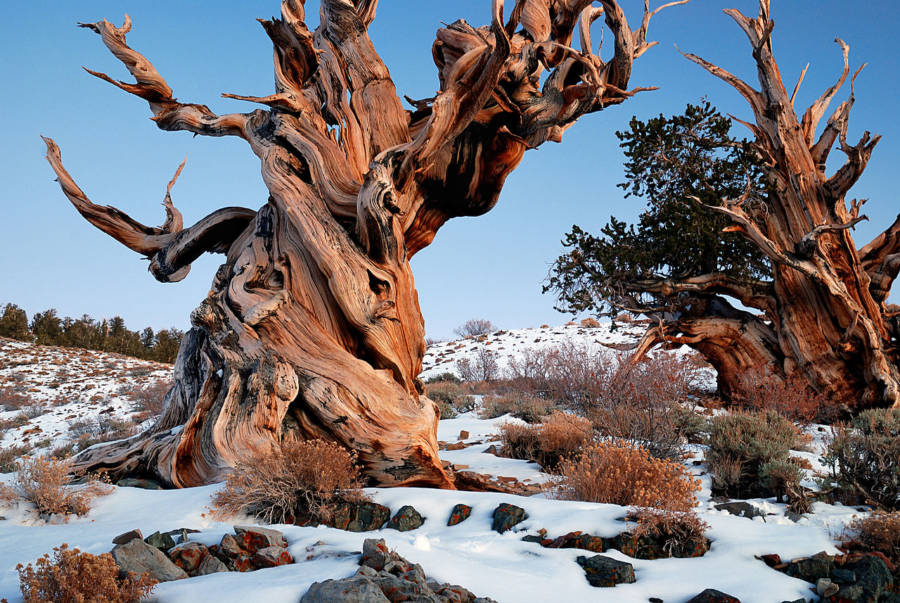 Surely something so old deserves its protection. For a little bit of scale regarding just how old this tree is, image this: Methuselah began germinating before the Pyramids of Egypt were even built. It has survived virtually the entirety of recorded human history, from the Fertile Crescent to Greece and Rome to the Dark Ages to the Industrial Revolution and the present day. 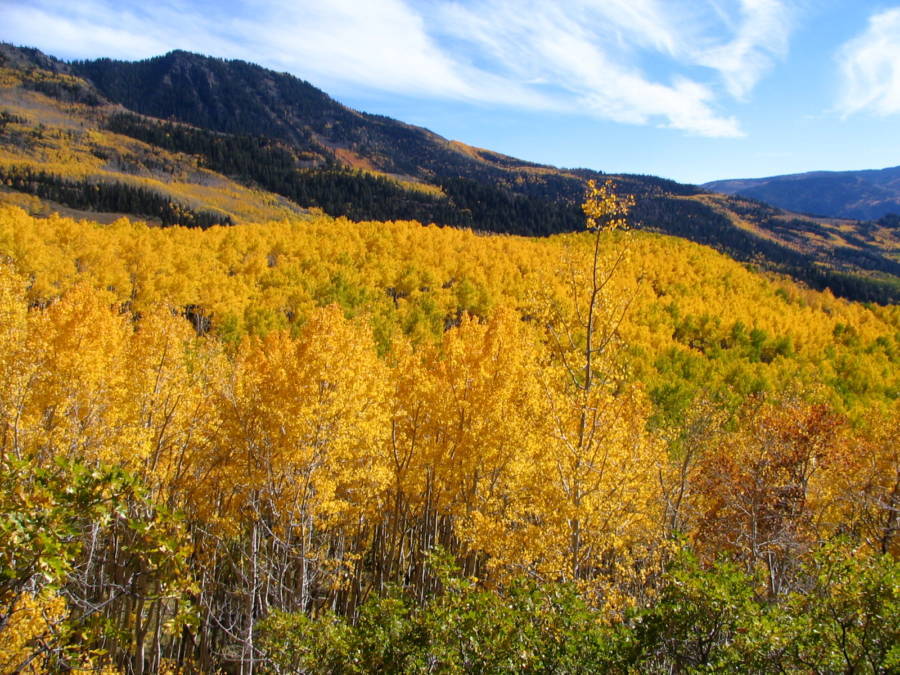 While Methuselah is widely considered to be the oldest tree in the world, some question the claim. This is largely because, when determining a tree’s age, cloning is a factor.

For example, scientists estimate that the giant quaking aspen tree colony in Utah known as “Pando” is more than 80,000 years old. However, much of this longevity comes from its clonal properties. When one trunk dies, a new shoot forms from the old trunk’s roots and takes its place. While the trunks themselves only reach about 30 years before dying, the root system beneath them keeps growing.

Other trees similar to Pando exist worldwide, such as the 9,000-year-old Old Tjikko, in Sweden. This tree appears more similar to Methuselah, as it is a single tree, however like Pando, Tjikko’s trunk has regenerated over centuries from a single root.

Keeping all of this in mind, Methuselah is still the oldest non-clonal tree on earth. That means it is the oldest individual tree of great age, rather than a regenerated trunk with an ancient root.

Is The Methuselah Tree The Oldest Tree In The World? 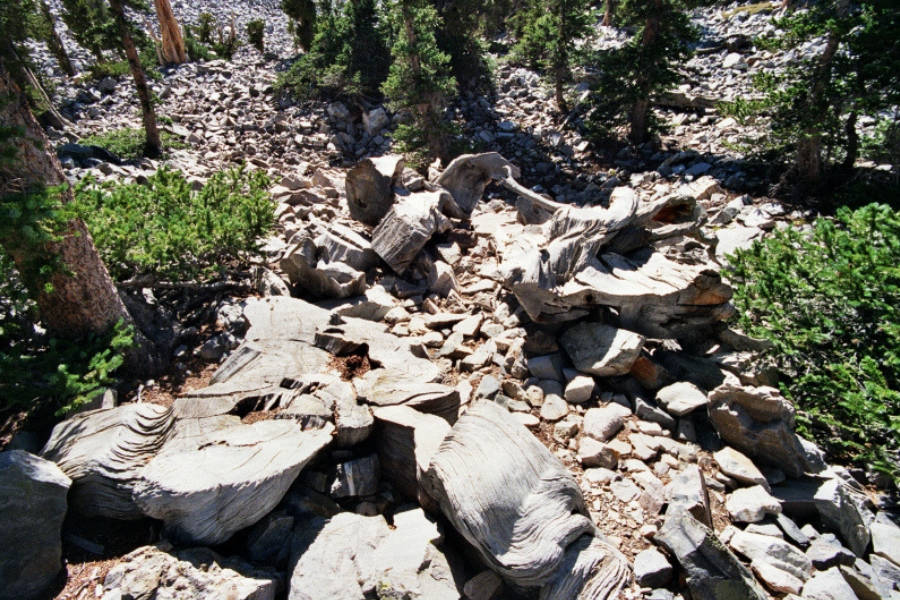 Wikimedia Commons Prometheus, the former “oldest tree in the world.”

Beyond clonal trees, other specimens have brought Methuselah’s status as the oldest tree in the world into question over the years as well.

In 1964, for example, a graduate student enlisted the help of the United States Forest Service to cut down a bristlecone pine tree in order to study it. Unfortunately, the research showed that they had just cut down the oldest tree in the world. Known as “Prometheus,” the tree showed an age of 4,862 years. It was approximately 66 years older than Methuselah. But Methuselah was able to retain the title of the oldest tree on earth because Prometheus was now no more. 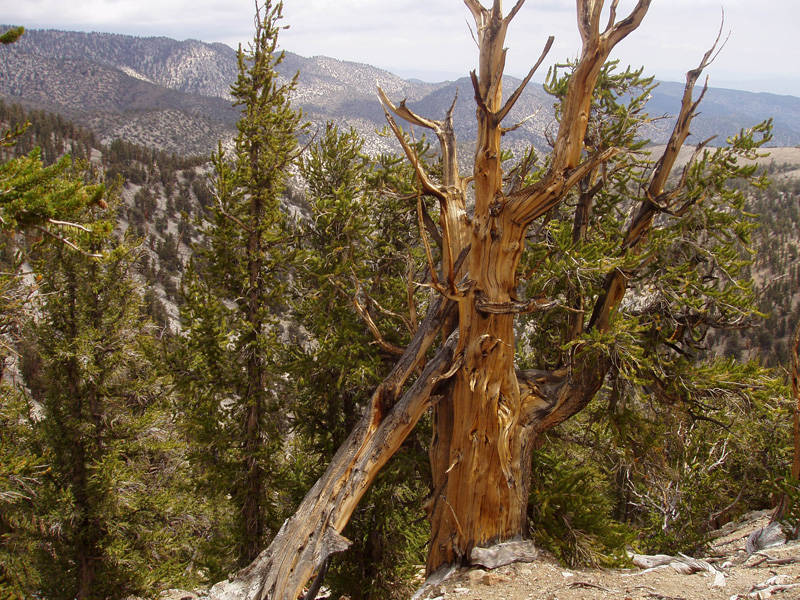 Wikimedia CommonsThe grove where the oldest tree in the world is located.

In 2013, scientists found another noteworthy tree in the White Mountains. Reportedly, it had lived more than 5,000 years. But four years later, people began to question this claim because of issues with how the sample was tested and Methuselah was ultimately able to retain its title.

Methuselah continues to hold its “oldest tree in the world” status to this day. To help it keep that title, and keep living, authorities have kept its location a secret and undertaken various other efforts to ensure its survival and even allow it to procreate.

In recent years, for example, scientists have removed cones from Methuselah. They have replanted these away from the tree in the hopes of possibly intervening genetically to continue its line.

Many have been successful. For now, however, scientists and rangers are leaving it up to nature and hoping that nearly 5,000 years of good luck will continue.

After this look at the Methuselah tree, widely considered to be the oldest tree in the world, check out the story of Stuckie, the mummified dog stuck in a tree. Then, step inside India’s astounding Great Banyan Tree.