Was The Trojan Horse Real? Inside The Historical Debate

According to ancient mythology, the Trojan Horse allowed the Greeks to finally capture the city of Troy, but historians differ on whether this famous wooden beast was actually real or not. 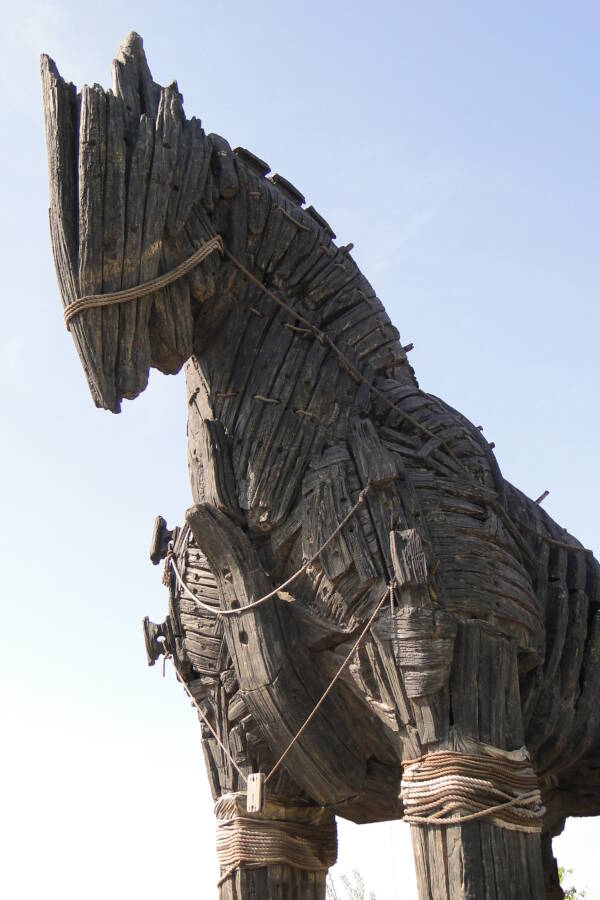 According to ancient Greek history, the Trojan horse allowed the war-weary Greeks to enter the city of Troy and finally win the Trojan war. Legend has it that the horse was built at the behest of Odysseus, who hid inside its structure along with several other soldiers to ultimately lay siege to the city. So epic was its construction — and its purpose — that it was forever immortalized in classical works.

But did it even exist? In recent years, historians have questioned whether the over-the-top display of Grecian military might was little more than a myth, constructed to make the Greek army seem more like a godly force and less like the mere mortals that they were. Other classists suggest that the Greek army did indeed use some type of siege engine — like a battering ram — and have described the Trojan horse’s existence as more metaphorical than anything else.

Regardless of whether the Trojan horse truly existed, its place in history cannot be denied.

The Trojan Horse in the Aeneid

There are very few mentions of the Trojan horse in antiquity, with the most famous coming in the Aeneid by Virgil, a Roman poet from the Augustan era, who wrote the epic poem in 29 B.C. In Virgil’s telling of the tale, a Greek soldier by the name of Sinon convinced the Trojans that he’d been left behind by his troops and that the Greeks had gone home. But his soldiers had left behind a horse, he said, as a dedication to the Greek god Athena. Sinon claimed that his troops were hoping to curry favor with the goddess after the Trojans laid waste to her land.

But the Trojan priest Laocoön quickly realized something was wrong. According to the Aeneid, he’d tried to warn his fellow Trojans about the impending danger. But it was too late — “the horse had entered Troy,” and the myth of the Trojan horse was born.

Then in truth, a strange terror steals through each shuddering heart,

and they say that Laocoön has justly suffered for his crime

in wounding the sacred oak tree with his spear,

by hurling its wicked shaft into the trunk.

“Pull the statue to her house”, they shout,

“and offer prayers to the goddess’s divinity.”

We breached the wall and opened up the defenses of the city.

An Early Skeptic Of The Trojan Horse Story

Prior to the Aeneid, a play called The Trojan Women by Euripides made reference to a “Trojan horse” as well. The play, which was first written in 415 B.C., had Poseidon — the Greek god of the sea — open the play by addressing the audience.

“For, from his home beneath Parnassus, Phocian Epeus, aided by the craft of Pallas, framed a horse to bear within its womb an armed host, and sent it within the battlements, fraught with death; whence in days to come men shall tell of “the wooden horse,” with its hidden load of warriors,” said Poseidon in the opening scene.

In both the play and the poem, the horse was the harbinger of victory over defeat. But while The Trojan Women play correctly depicted the wooden horse in a metaphorical sense, the Aeneid‘s depiction led historians to view the wooden horse as more literal, and factual, in existence. And this is a notion that both ancient and modern historians seem to want to be disabused of.

The first historian to question the existence of the Trojan horse was Pausanias, a Greek traveler and geographer who lived in the second century A.D. during the Roman reign of Marcus Aurelius. In his book, Description of Greece, Pausanias describes a horse made out of bronze, not wood, that held Greek soldiers.

“There is the horse called Wooden set up in bronze,” he wrote. “But legend says of that horse that it contained the most valiant of the Greeks, and the design of the bronze figure fits in well with this story. Menestheus and Teucer are peeping out of it, and so are the sons of Theseus.” 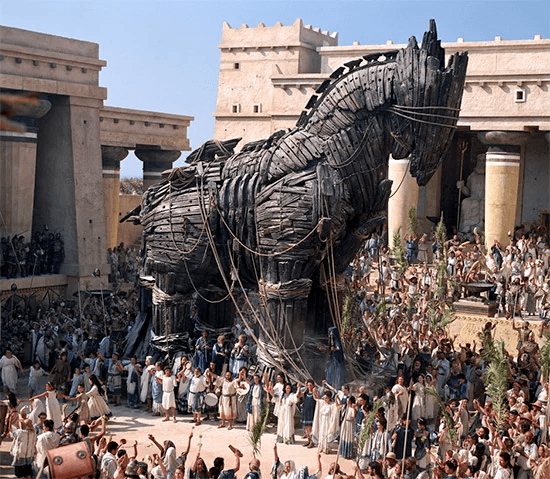 Wikimedia CommonsA still from the 2004 film Troy depicting the horse being hauled into the city and Trojans celebrating.

More recently, in 2014, Dr. Armand D’Angour of Oxford University spelled it out more plainly. “Archaeological evidence shows that Troy was indeed burned down; but the wooden horse is an imaginative fable, perhaps inspired by the way ancient siege-engines were clothed with damp horse-hides to stop them being set alight,” he wrote in the University’s newsletter.

However, as recently as August 2021, archaeologists in Turkey found dozens of wooden planks dating back thousands of years in the hills of Hisarlik — commonly believed to be the historical location of the city of Troy.

Although many historians were skeptical, those archaeologists were fairly convinced they had found the remains of the very real Trojan Horse itself.

And still, other historians suggest that the real “Trojan horse” could be anything from a ship with soldiers inside of it to a simple battering ram similarly dressed in horse hides.

Whichever version of the story you choose to accept, the term “Trojan horse” is still used today. In modern parlance, it refers to subversion from the inside — a spy who infiltrates an organization, for example, and subsequently turns the organization’s very existence on its head.

More recently, however, a “Trojan horse” — more commonly referred to as merely a trojan — is used to refer to computer malware that misleads users about its true intent. When a trojan takes over your computer, it leaves it vulnerable to other “invaders” — viruses that could compromise your personal information and leave you vulnerable to hacking and other offenses.

Perhaps the historians of tomorrow will look to computer scientist Ken Thompson — who first coined the phrase in the 1980s — in the same way we view Virgil and Pausanias today.

“To what extent should one trust a statement that a program is free of Trojan horses? Perhaps it is more important to trust the people who wrote the software,” he said.