From shipwrecks to sunken tanks to human remains, Truk Lagoon is among the biggest and eeriest underwater graveyards on Earth. 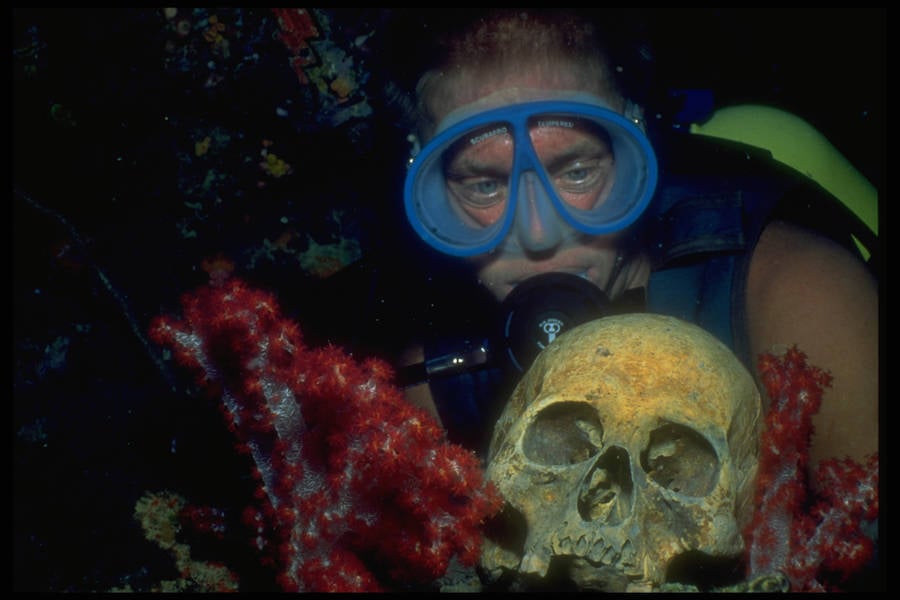 From massive wreckage, a diver’s paradise is born.

Truk Lagoon, a small part of Micronesia located about 1,100 miles northwest of New Guinea in the western Pacific, has been home to several tribes since at least 1528, when Spanish explorers made the first recorded sightings there.

Little is known about Truk (also known as Chuuk) before that point, and even after that point. Spanish colonialists only officially claimed the area (part of the Caroline Islands) in the late 19th century before selling it to the Germans in 1899. Then, Japan gained possession of Truk Lagoon from Germany when the latter lost it following their defeat in World War I.

But it was during the next World War that the most dramatic chapter of Truk’s history came, the chapter that made the area “the biggest graveyard of ships in the world”. And for the divers and researchers who’ve explored its depths, Truk Lagoon certainly lives up to its title. 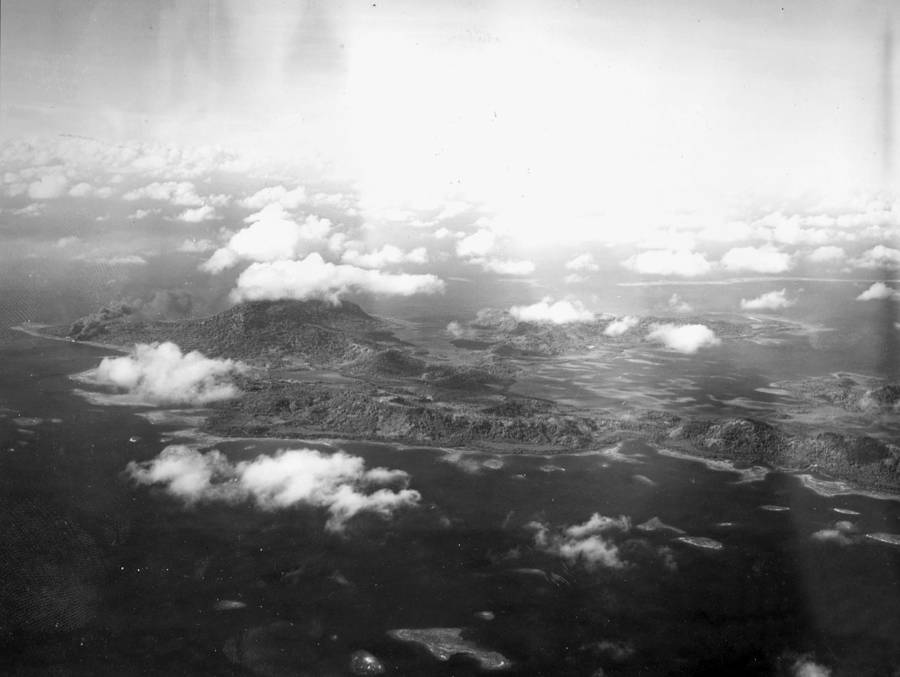 During World War II, Japan used Truk Lagoon as one of their main naval bases, anchoring a large portion of their fleet and stationing some 40,000 men there — until one fateful American attack.

The Japanese had suspected that an attack was coming, having realized that Truk was vulnerable after the Americans captured the nearby Marshall Islands on Feb. 3, 1944. Around that same time, the Japanese saw American reconnaissance planes in the skies above Truk. 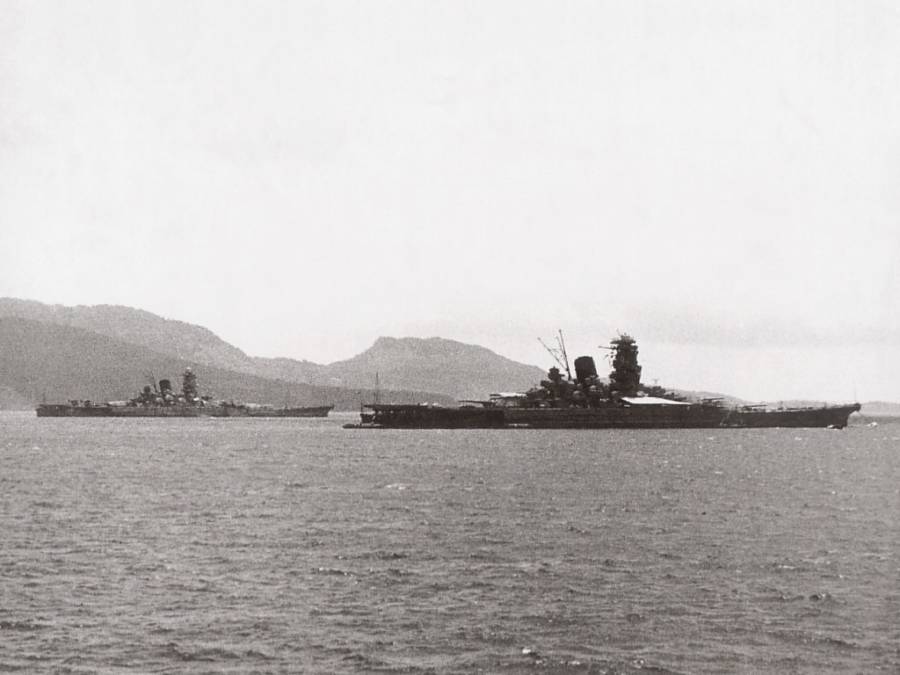 Thus the Japanese took the precaution of moving some of their larger warships away from Truk, but much remained behind.

On Feb. 17, 1944, the U.S. Navy commenced Operation Hailstone, a combined air and ground attack that devastated the Japanese position at Truk Lagoon. Over the course of two days, American planes sank approximately 50 Japanese ships, destroyed at least 250 Japanese planes, and killed some 4,500 Japanese personnel. It’s estimated that on one ship alone, 400 Japanese soldiers who were stuck in the cargo hold were killed. 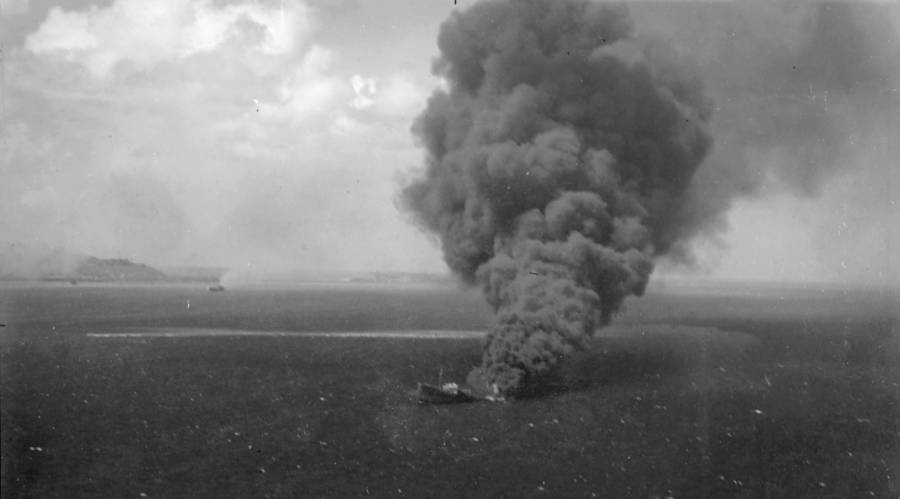 The U.S. mission to neutralize the strength of Truk Lagoon’s concentrated Japanese fleet was a success, leaving the area as an insignificant military position for the remainder of the war.

And so Japan’s forgotten fleet remained in the same exact spot it had sunk to — even for decades after the war ended.

The Ghost Fleet Of Truk Lagoon 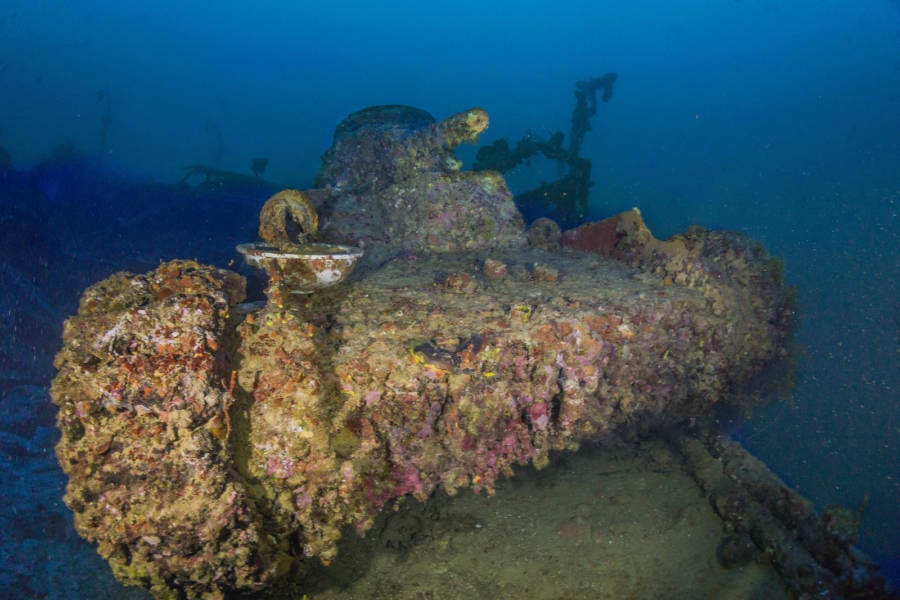 montereydiver/FlickrThe wreck of a Japanese tank.

It wasn’t until 1969, when famed French explorer Jacques Cousteau filmed an expedition at the wreck site called Lagoon of Lost Ships, that Truk gained newfound interest. The film showed Cousteau and his team as they found not only ships, but also that some of those ships were still full of bodies. This prompted a Japanese recovery effort that saw them pull many bodies (how many exactly remains unclear) from the wreckage and give them a proper burial.

Since then, Truk Lagoon has become a popular site with divers and researchers. The rarity of having so many intact ships in such close proximity draws in explorers from all over the world. 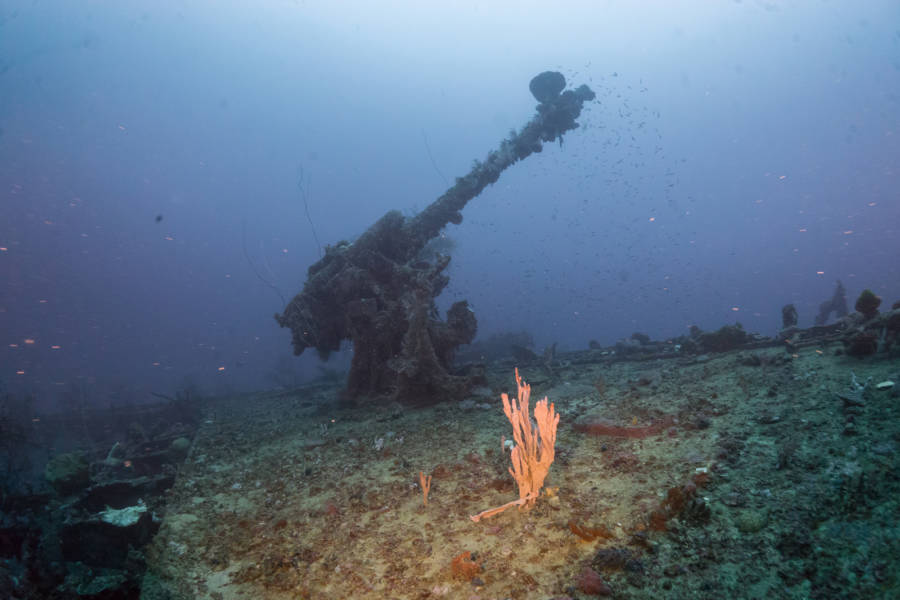 Those who explore Truk Lagoon today can see the aftermath of Operation Hailstone in striking detail. In some of the ships, it’s possible to see exactly how they were sunk: One was taken down by a torpedo, clearly visible in the middle of the ship. Another ship, identified as the Gosei Maru, has a huge hole that indicates a bomb landing.

While some ships, like Gosei Maru, have been identified thanks to explorations over the years, others still have not. For some divers, making those identifications is precisely the challenge and appeal of diving at Truk. 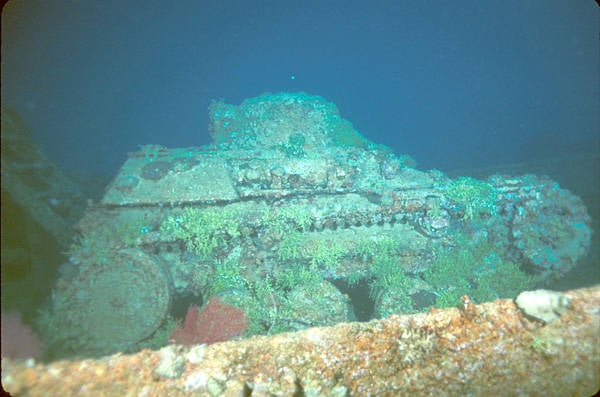 Doing that kind of detective work, despite the fact that we’re talking about shipwrecks that are more than 70 years old, is made in possible in part by the region’s crystal clear waters. In fact, some ships sitting 50 feet deep in the ocean can be seen from above the surface.

And it’s not just ships that sit below the surface at Truk Lagoon. A trove of relics that were stored in the sunken ships still remains as well: motorcycles, radios, weapons, spare parts, railroad cars — and even some human remains. 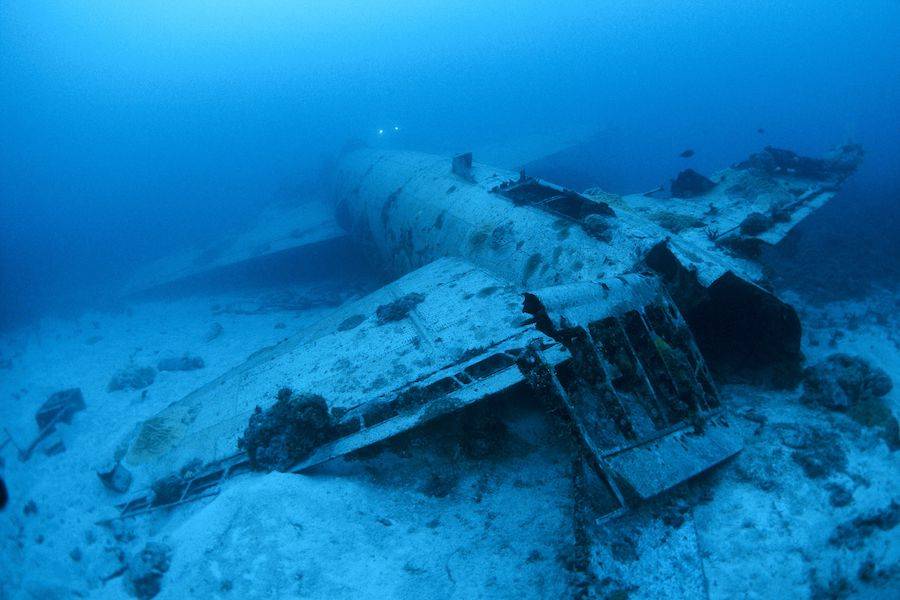 Xavier DESMIER/Gamma-Rapho via Getty ImagesThe remains of an American bomber plane at the bottom of Truk Lagoon.

Thanks to the appeal of the wrecks, Truk has become an increasingly popular tourist destination with diving operations springing up to service the demand. The first dive operation opened in 1973 with Kimiuo Aisek at the helm.

Aisek, a native Chuukese, witnessed Operation Hailstone firsthand at age 17 when he was a dockworker. Aisek was also an early advocate for protecting the site, which was designated the Truk Lagoon National Monument in 1972.

Though some seek to protect the wrecks at Truk, the local environment also needs protection from the wrecks. Old oil and fuel from the ships still leak into the water, which is not only a potential hazard for explorers but corrosion experts say it could ultimately lead to the wreck site’s complete collapse someday. 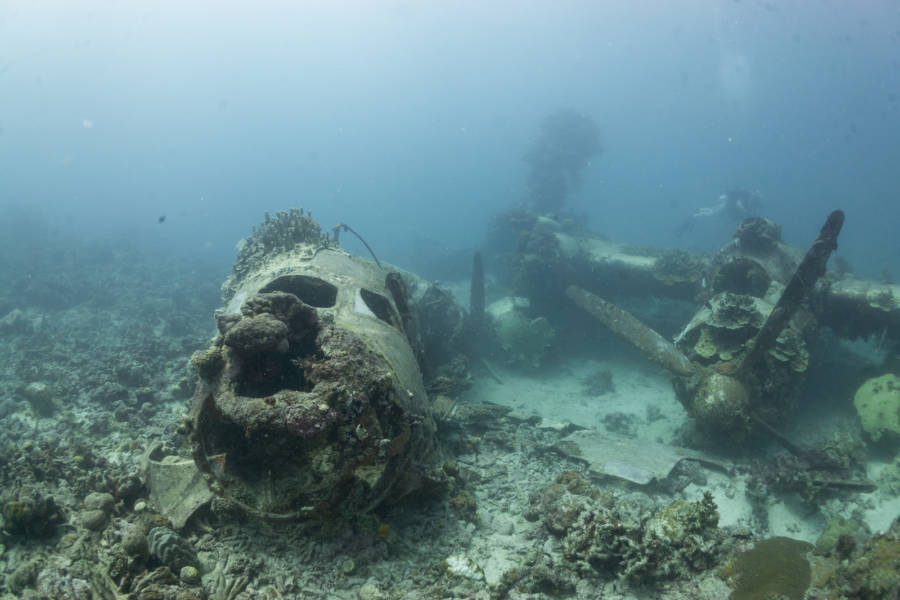 montereydiver/FlickrAircraft remains sit on the ocean floor at Truk Lagoon.

But while the site remains, it represents a haunting reminder of death and devastation wrought three-quarters of a century ago.

As Lagoon of Lost Ships states in its closing, “Truk Lagoon presents a mysterious planet of life and death. On the one hand, nature absorbs the artifacts of war. And on the other, she has preserved them. Only centuries from now, will every trace of man’s follies vanish from the bottom of Truk Lagoon.”

After this look at Truk Lagoon, check out sunken ships that’ll leave you fascinated. Then, read up on the eeriest ghost ships in history.