New estimates place the cost of Trump's wall much higher than originally stated. 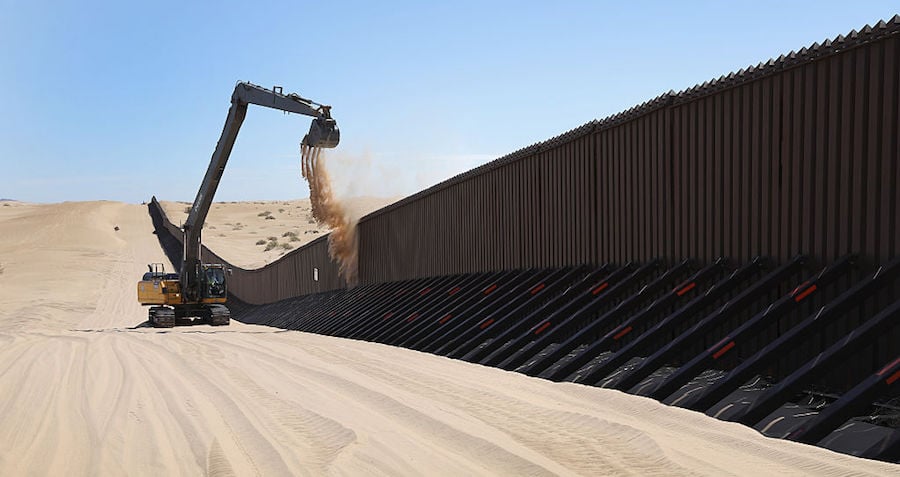 John Moore/Getty ImagesA digger removes sand drifts from the Mexican side of the U.S.-Mexico border fence in California.

Donald Trump’s “big, beautiful wall” is going to come with a big — and perhaps not so beautiful — price tag, Reuters has learned.

On Thursday, the news agency reviewed a U.S. Department of Homeland Security (DHS) internal report, which estimated that the U.S.-Mexico border wall could cost up to $21.6 billion and take more than three years to complete.

During his presidential campaign, Trump said that the wall — which upon completion would span over 1,250 miles — would cost approximately $12 billion.

According to the document, which Reuters says will be presented to Department of Homeland Security Secretary John Kelly by next week, the wall will be constructed in three phases.

Of course, any construction is contingent on congressional approval and funding — funding which will come from the U.S. taxpayer dollars, not Mexico, as Trump vowed to voters.

Congress already authorized the construction of a border wall in 2006, vis-a-vis the Secure Fence Act. This law granted 700 miles of fencing along the U.S.-Mexico border, with the Bush and Obama administrations building 652 miles of it already.

Irrespective of the Secure Fence Act, Congress would still have to appropriate the money and authorize the construction of more barriers should Trump’s wall come to fruition.

And for Trump, that support may be hard to come by, and from a potentially surprising state: Texas. While the Lone Star state has the longest U.S. border with Mexico, none of its 38 Congressional members — 25 of them Republican — would go on record with the Texas Tribune to state that Trump’s wall is a good idea.

The DHS report bears this fear out. According to a Reuters source, the DHS may have to go to court to seek eminent domain for the final phase.

Even if it receives permission for eminent domain, some Texas lawmakers still view the wall as a generally bad idea.

“Building a wall is the most expensive and least effective way to secure the border,” Rep. Will Hurd (R-Tex.) said in late January.

“Each section of the border faces unique geographical, cultural, and technological challenges that would be best addressed with a flexible, sector-by-sector approach that empowers the agents on the ground with the resources they need.”

Next, learn about the environmental costs of Trump’s wall — and the fate of other border walls countries have created to keep others out.