Over several months, the Tsavo lions stalked and killed over 100 men working to build a railroad through Kenya. 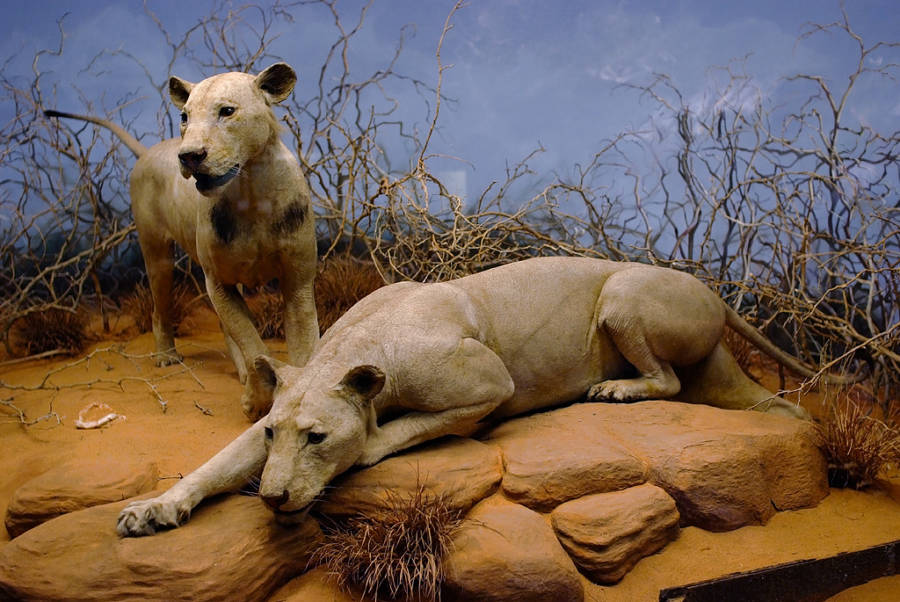 Wikimedia CommonsThe man-eating Tsavo lions on display at the Chicago Field Museum. Note that Tsavo male lions are maneless due to the extreme heat in the region.

In 1898 an estimated 135 Indian and African workers, who were building a railway bridge over the Tsavo river in Kenya, were attacked and eaten by two man-eating lions. Over nine terrifying months, it fell on Lt. Col. John Patterson, the British officer overseeing the bridge’s construction, to track down, outwit and kill the Tsavo lions – a formidable task that almost failed.

To the workers, the man-eaters were not lions but “demons,” ones they called “The Ghost” and “The Darkness”. To Patterson, they were simply lions, with a rational reason for their unnatural taste for human flesh, one that likely came from Tsavo being used as a dumping ground for corpses over the years.

Whatever the cause, Patterson had his work cut out for him. Shortly after his arrival in March, workers started disappearing in the night.

On investigation, Patterson found a lion’s “pugmarks,” or footprints, and a trail of marks left by the victim’s heels as he was dragged from his tent across the terrain. Following the trail, he was soon confronted with a gruesome spectacle.

“The ground all-round was covered with blood and morsels of flesh and bones, but the unfortunate jemadar’s head had been left intact…the eyes staring wide open with a startled horrified look in them,” he wrote later, recalling the scene in his book on the traumatic events.

Patterson, with a rifle in hand, spent the night perched in a tree overlooking the deceased jemadar’s tent. Out of the darkness, he heard a lion’s roar in the distance and the panicked cries of people at another camp. But he could do nothing – a pattern that would become all too prevalent. 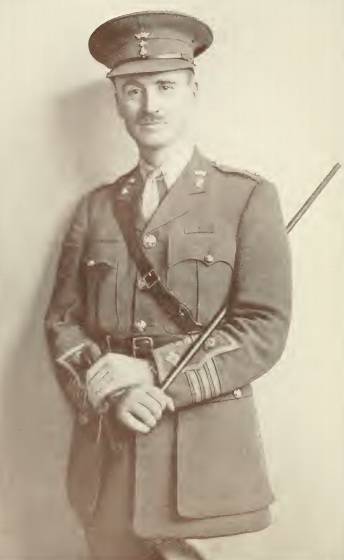 The campsites that housed a couple of thousand men were scattered over too wide of an area for Patterson to patrol, though over the next few months efforts were made to keep the Tsavo lions out of the camps. Boma, or thorny walls made from acacia trees, were erected around campsites, while bonfires blazed all night within the enclosures to keep the lions out.

But the Tsavo lions were persistent. They jumped over or dug under the thorn walls and were unafraid of fire. Brazenly, they snatched men out of their tents and often feasted on them in front of their horrified co-workers.

Soon hundreds of men left following the construction of the railhead as it pushed further beyond Tsavo. The remaining men were concentrated in larger camps around the bridge. With less territory to patrol Patterson was more likely to encounter the lions.

And encounter them he did. His first encounter nearly cost him his life, when a lion stalked him in the dark.

To increase safety, Patterson built a boxcar trap, with a partition separating the bait from the lion. Upon entry, the lion would stand on a spring, activating the door which would slam shut behind it.

Unfortunately, that failed too. When Patterson used himself as bait the Tsavo lions did not enter. When two Indian soldiers replaced him, they lost their nerve and fired in every other direction than at the trapped lion in front of them. In the confusion, a stray bullet blew away a bar on the door allowing the lion to escape.

The situation was getting desperate. In close to nine months not one of the lions had been killed. Construction of the Tsavo bridge had halted, and most of the workers, who were no longer willing to be cat food, had fled.

But Patterson refused to give in. On Dec. 9 he finally got his chance. After using a donkey carcass as bait he managed to shoot one of the Tsavo lions from a raised platform in a tree. But it had taken two hours to get the shot through the undergrowth, while the well-hidden lion was circling his platform like a shark. 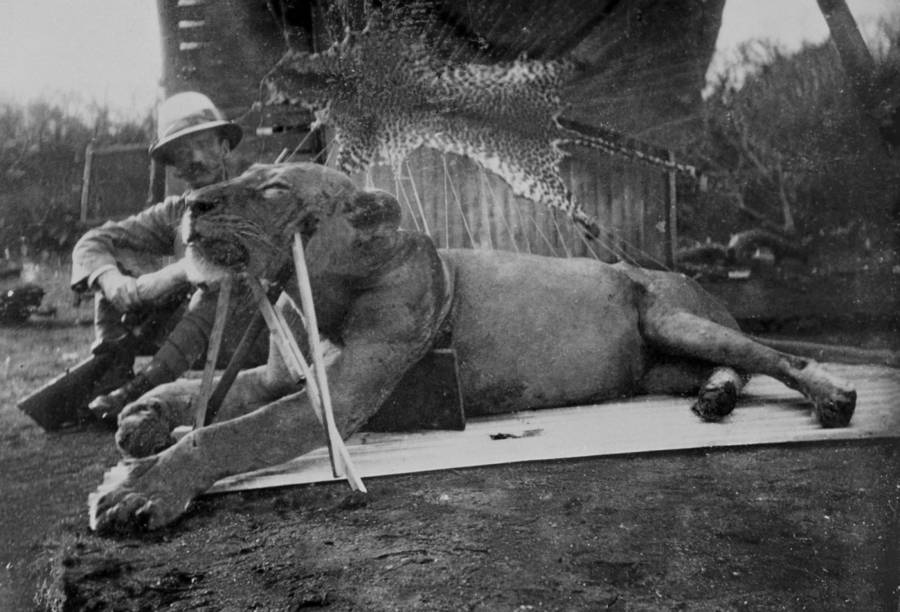 The second lion did not go so easily.

After disappearing for almost two weeks, the lion made a surprise attack on a worker on Dec. 27. Patterson shot it twice, but only injured it. The lion bolted but left a trail of blood for Patterson and his men to follow.

They found the lion hiding in a thicket. Now threatened, it charged the men. As it did, Patterson fired four shots into it, but with little effect.

Out of bullets, Patterson was forced to climb a tree with his men, just narrowly escaping the lion. From the tree, Patterson grabbed a rifle from one of his men and shot the lion knocking it to the ground.

The lion was motionless, so Patterson jumped to the ground. As soon as he did, it was on its feet and barrelling towards him. Patterson stood his ground, took aim and fired two shots –one into its chest, the other into its head. Finally, the lion collapsed dead just four meters from him.

After nine months of hell, Patterson had the heads of the Tsavo lions mounted on his wall, and their skins used as his floor rugs for the next thirty years.

In 1928, they were sold for $5,000 to the Chicago Field Museum, where they were reassembled, stuffed and put on display, and can be seen to this day.

After learning about the man-eating Tsavo lions, read about the lions that killed the poacher who was hunting them. Then, check out these photos of a lioness nursing an orphaned baby leopard.