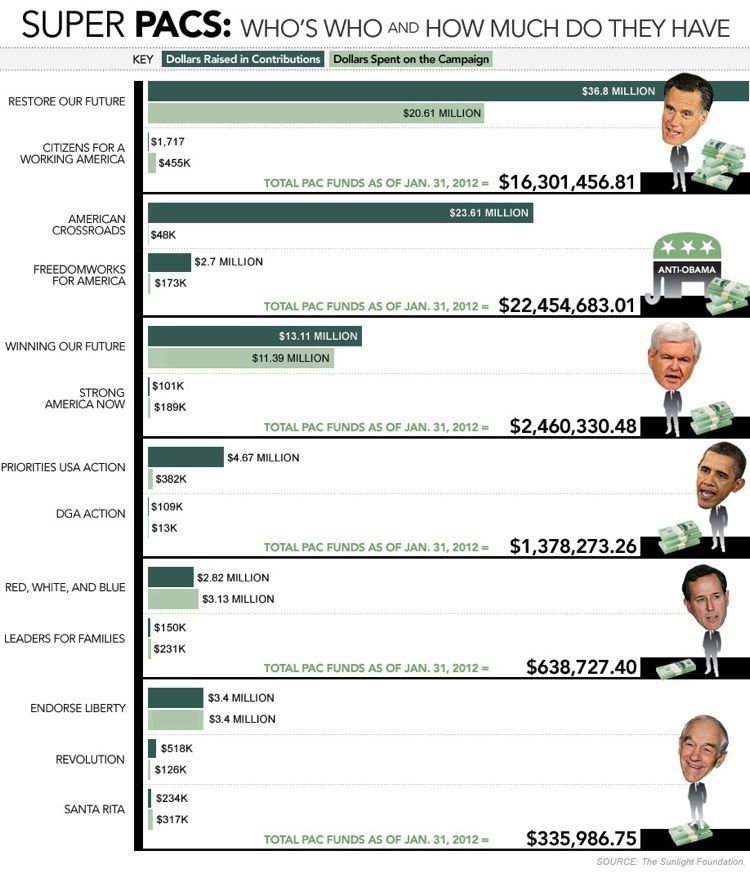 The amount of Super PAC money received by each candidate in the 2012 presidential election. Image Source: Slate

A Super PAC, or Political Action Committee, is a fairly recent yet highly influential development in U.S. presidential elections. These groups had a huge impact on the 2012 election and will once again do so this year. Super PACs are independent political committees that support a specific candidate.

Often through anonymous donations, a Super PAC may raise unlimited sums of money from corporations, unions, associations, and individuals that can be used to promote a certain candidate. Donor names must eventually be given to the Federal Election Commission, however, this can be done merely on a monthly or semi-annual basis, allowing things to slip through the cracks, if only temporarily.

Before Super PACs, campaigns were often publicly funded and had strict spending limits that were highly regulated. Candidates were required to keep detailed records of all transactions, including donations. However, Super PACs skirt around all these limits. By law, they cannot directly contribute to the candidate, because candidates are required to limit spending to the public fund provided. But, since the money is technically independent from the candidate, it can be used in any way to support the candidate. For instance, Super PAC funds are often used to create negative ads about the opposition.

The result of the Super PAC phenomenon is that the presidential race becomes a battle between candidates to prove who has richer friends, and thus more money to spend. This not only encourages insane spending and widespread, often spurious, attacks on opponents, but it also creates a strong bond between corporations and political parties with similar agendas.

Now, political races have always been about money, campaign financing has always been corrupt, and corporations and individuals with certain agendas have always been in bed with politicians, but the rise of Super PACs has allowed this kind of activity to skirt the law and worm its way ever further into the mainstream. 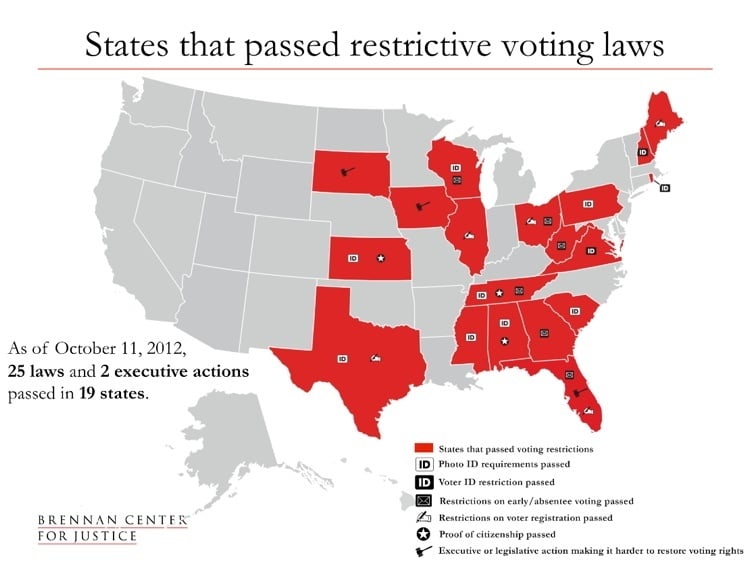 The 2016 presidential election will see 15 states with new voting restrictions in place. These states have lawfully introduced bills that restrict voters and tend to affect specific demographics (once again, more often than not, institutional racism is at work here) that may vote against the political status quo of the given state. Such restrictions include stricter voter ID laws, reduced early voting period, curbed registration drives, and more severe limitations on people with past criminal convictions.

The states implementing these laws claim it will remove fraud and protect the integrity of the elections. Many others claim that–like so many of the other absurd laws and procedures underpinning our electoral process–this is actually a way to minimize the influence of minorities and the lower classes, and to truly keep the will of the people at bay.

Callie Stewart
Callie Stewart is a writer, graphic designer, and photographer living in New York City. She is a big fan of anthropology, music, art, the written word, a good glass of wine and The Jerk.
You might also like
Remove Ads
×
Follow hu On