The Tragic Story Of The USS Akron, The Airship That Changed Transportation History

See the glorious USS Akron airship and learn why this vintage flying vessel's historic crash has now largely been forgotten. 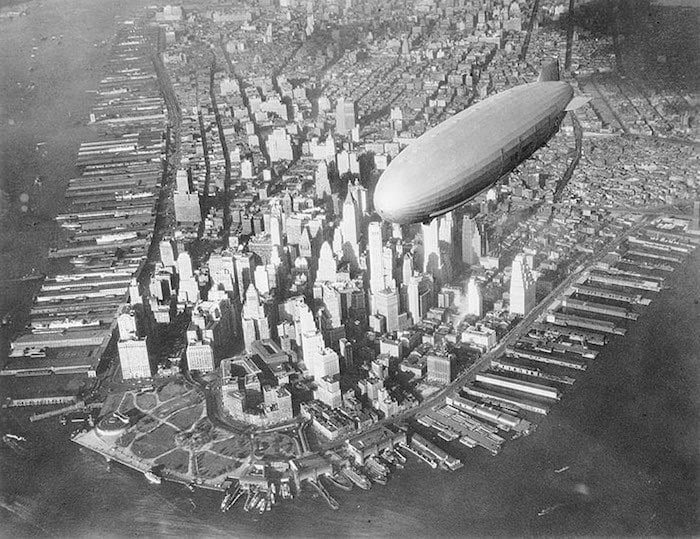 The USS Akron flying above the Manhattan skyline in the early 1930s.

Long before there were jumbo jets and cruise ships ferrying people to every imaginable destination, there were airships. Huge, helium-filled, blimp-like aircraft were the cutting edge of transit technology nearly a century ago. Surely as Depression-era New Yorkers looked up and saw the USS Akron airship flying above Manhattan’s iconic skyline, they saw the future.

But in the case of the USS Akron (and the rest of the airship industry), the future held disaster.

This 785-foot behemoth was built for the Navy by Goodyear Tire & Rubber Co. in Akron, Ohio, in 1931, and was destined for failure. Two failed takeoffs left the airship grounded, and a third accident killed two sailors. Still, airships were hailed as the future of travel both civilian and military. They could hold a large load, and although they were slow, they proved to be a valuable German asset for strategic bombing.

In the midst of this brief love affair with the airship, sometime between 1931 and 1933, the USS Akron sailed leisurely over Manhattan. We don’t know for sure when the photo above was taken, but we know it was no later than April 4, 1933, when the Akron malfunctioned in bad weather and went tail-first into the Atlantic Ocean.

The crashed killed 73 of the Akron‘s 76 crew members. There were no life vests on board and only one rubber raft. According to newspaper accounts at the time, the rubber raft never even got a chance to be used. The three survivors clung to debris floating in the cold New England waters until a German ship rescued them.

“No broadcasters, no photographers, no big balls of fire, so who knew?” Nick Rakoncza, a member of the Navy Lakehurst Historical Society, told The Columbus Dispatch. “Everybody thinks that the Hindenburg was the world’s greatest airship disaster. It was not.”

Indeed, although it’s the Hindenburg explosion that has gone down in the history books as the event that turned the public against airship travel, the USS Akron represents history’s worst airship disaster to this day.

Back when the photo above was taken, however, long before a crowded Manhattan skyline, supersonic jets, or the thought of an airship catastrophe, floating masses of aluminum like the USS Akron were a sight to behold. Perhaps one day soon, they will be once again.

After learning about the USS Akron disaster, have a look at 18 stunning photos from the golden age of air travel. Then check out the abandoned supersonic plane sitting in a random backyard in Russia.