After Víctor Barrio was gored to death on live TV, many Spaniards and animal rights advocates called for an end to the dangerous sport. 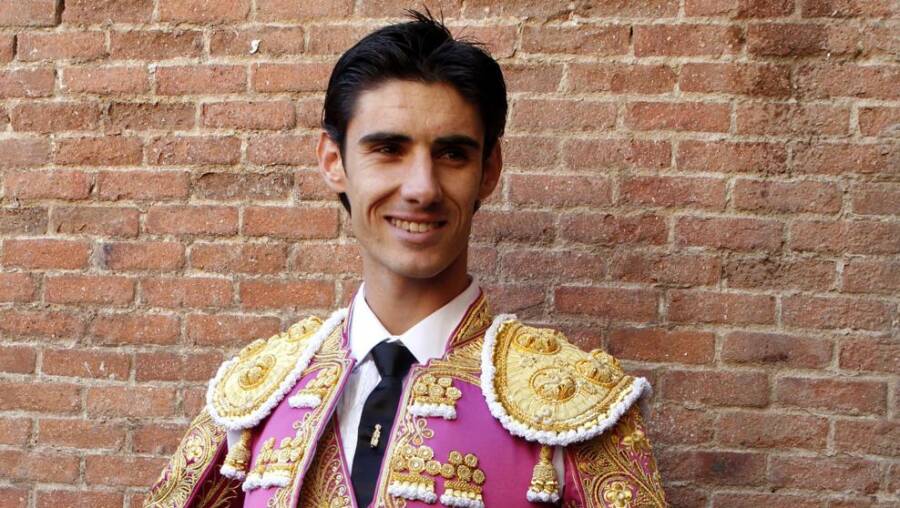 On July 9, 2016, famed matador Víctor Barrio died a terrible death on live TV. Barrio, a bullfighting professional, was gored by a bull named Lorenzo at the Feria del Ángel festival in the Aragonian capital of Teruel as his horrified wife, father, sister, and grandparents looked on.

His death marked the first time that a bullfighter had been killed in the ring since 1992 when the banderilleros Manolo Montoliú and Ramón Soto Vargas lost their lives in two separate bullfighting incidents.

But Victor Barrio’s death also marked a watershed moment for Spaniards who had to rethink how they saw the long-standing — but cruel — tradition of bullfighting.

How Víctor Barrio Was Inspired To Become A Matador 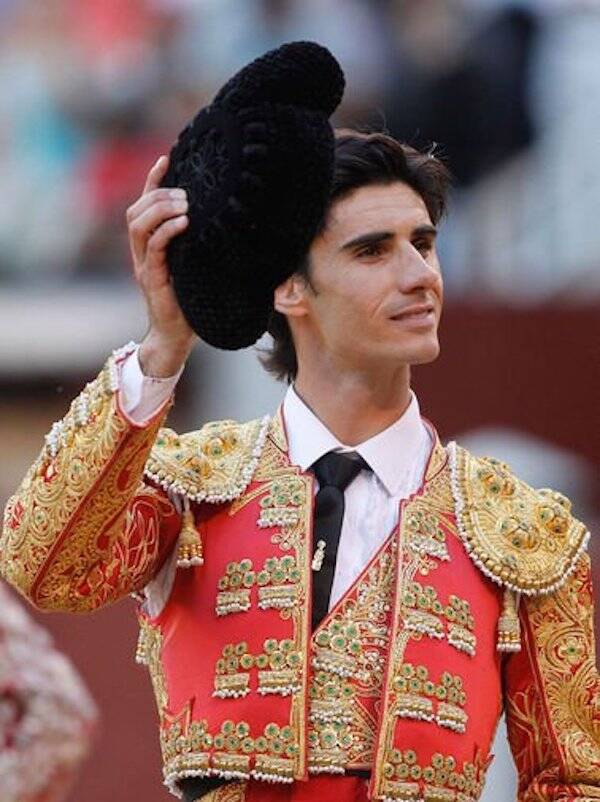 TwitterBarrio made his bullfighting debut in 2008.

When Víctor Barrio chose to become a bullfighter, he joined a legion of historic sportsmen whose practice dates back to ancient Greece. Bullfighting as the Spaniards know it, however, is a mixture of Iberian, Visigoth, and North Moorish fighting styles.

Modern Spanish bullfighting was first perfected in 1726 by Francisco Romero of Ronda, Spain, who introduced the sword and the cape that has become synonymous with matadores, or the “killer of bulls,” who is the leader of the entourage in a bullfight.

And it was the life of a matador that first enchanted Víctor Barrio, who was born in Segovia, Spain, on May 29, 1987. While little is known about his early life other than that he was a golf caddy before he became a matador, he made his debut in the bullfighting ring on July 13, 2008, at Las Ventas de Retamosa in Toledo.

He emerged victorious, cutting off four ears and a tail of the bull against him.

As his career progressed, he developed a fearsome reputation. He won some of the most prestigious awards in the sport, including La Espiga de Oro in Calasparra, Frascuelo Silver in Moralzarzal, and The Potter Gold Villaseca de la Sagra in Toledo.

So when he entered the ring at the Feria del Ángel, Víctor Barrio likely thought that he would add yet another win to his ever-growing collection.

He could not have been more wrong.

The Death Of Víctor Barrio At The Hands Of A Bull 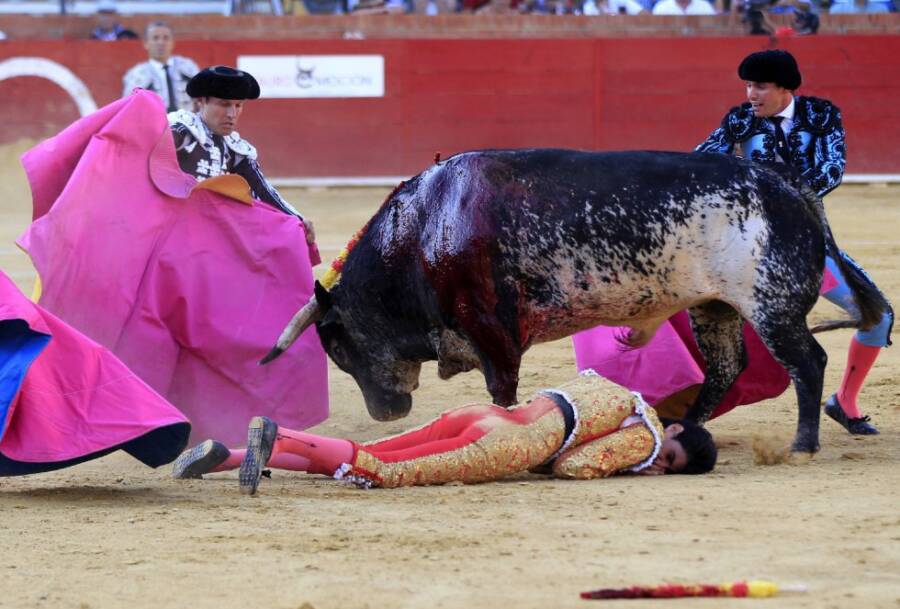 Antonio García/EFEBarrio was pronounced dead moments after entering the hospital.

On that fateful July day, Barrio’s family was all gathered to watch his match. But just mere seconds after Lorenzo the bull was released into the ring, Barrio was gored fatally in the chest.

The over one-ton bull quickly charged at Barrio and punctured his lungs several times. In the melee, Lorenzo continued to harm Barrio, ultimately severing his aorta and inflicting damage around his heart.

And all the while, his wife Raquel Sanz — a journalist he’d married in 2014 — his father Juan, his sister, and his grandparents looked on in horror, incapable of doing anything to help him. The rest of the nation watched on as well as the entire tragedy was captured on live television.

His death marked the first death of a bullfighter in the ring since the turn of the 21st century.

While Barrio was whisked away to the infirmary, nothing could be done to save his life as the damage inflicted by Lorenzo was far too great. He died shortly after he entered the hospital.

Sanz tweeted that her “life had gone” and shared a poem by Jose Leon. Prime Minister Mariano Rajoy also tweeted out his condolences to the family.

But not everyone had tender words to share for Víctor Barrio’s passing.

His Death Sparked A Conversation About The Future Of Bullfighting

As is tradition, Lorenzo the bull was killed right after he killed Víctor Barrio. However, Spanish tradition also called for Lorenzo’s mother Lorenza to be killed, which triggered an outpouring of venom from animal rights activists all over the world.

Some tweeted that it was an act of cruelty against Lorenza who didn’t do anything wrong, while others went so far as to say that Barrio, himself, deserved to die for his actions in the ring.

Ultimately, efforts to #SaveLorenza, which had become a trending topic on Twitter, were rendered moot as a Spanish reporter revealed that Lorenza had died of “old age” just a few days after her son was sent off to the slaughterhouse.

But the debacle had raised a bigger question: had Spain outgrown its need for bullfighting? 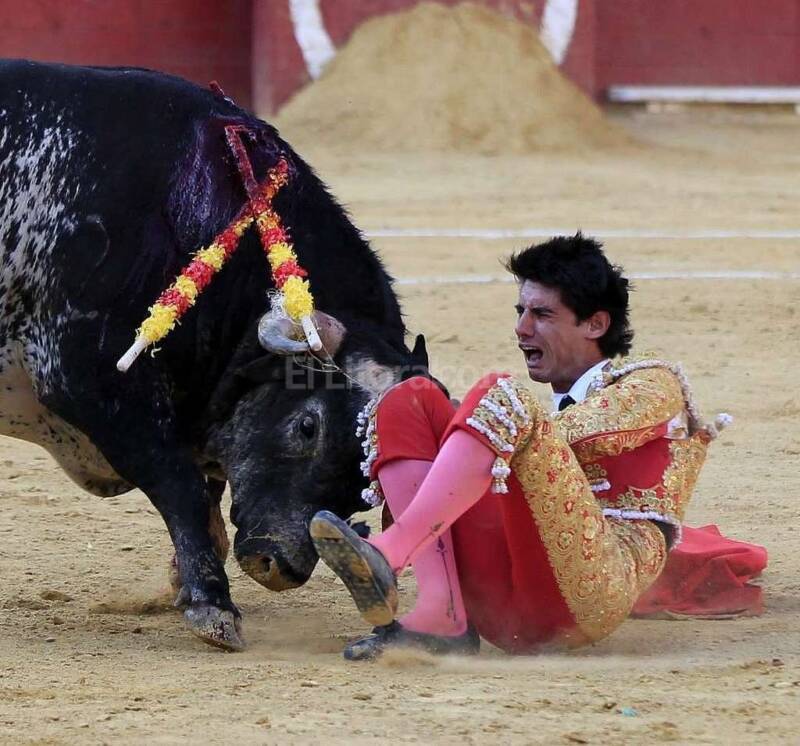 YouTubeSeconds after he entered the ring, Barrio became the first matador since 1992 to be fatally gored.

As of this writing, bullfighting is legal in most of Spain. However, thanks to the efforts of such Spanish animal rights organizations as the Animalist Party Against Mistreatment of Animals (or PACMA) and increasing awareness around the plight of bulls during a bullfight, the bloody sport has significantly decreased in popularity.

In recent years, the country’s far-right has seized upon the bullfighting cause, claiming that it’s a “cultural” aspect of Spanish nationalism and that efforts to minimize or otherwise stop the practice are little more than anti-patriotic efforts on behalf of liberal-minded citizens.

The politics of bullfighting aside, the deaths of matadors such as Victor Barrio are mostly responsible for why the practice has fallen out of favor with most Spaniards in recent decades. 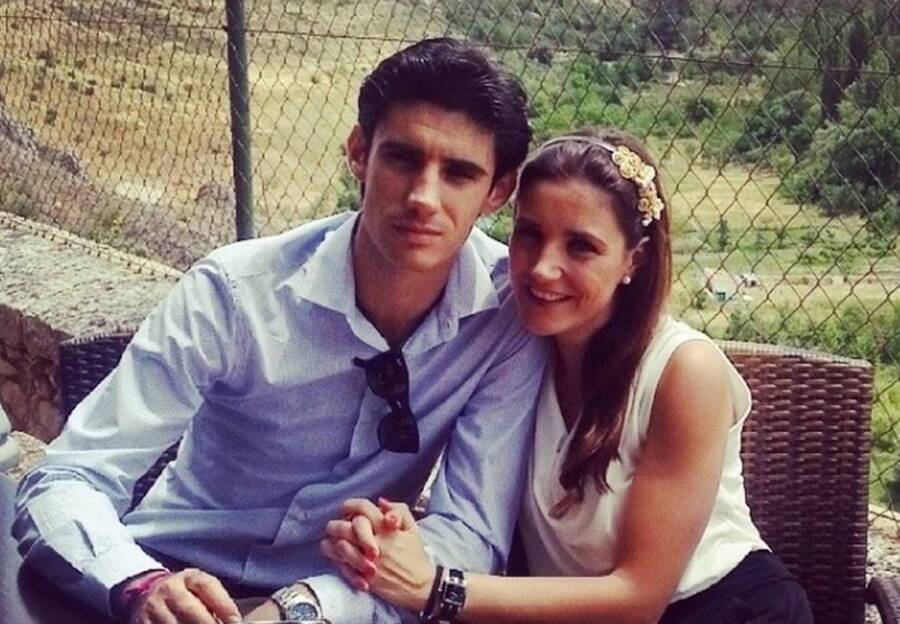 InstagramBarrio’s wife Raquel Sanz was devastated but took the time to thank fans for their support.

Just one year after Víctor Barrio was gored to death, Spaniard Iván Fandiño died as a result of his injuries in the bullfighting ring.

And thanks to COVID-19, the tide has really begun to turn against the practice of bullfighting, though the reasoning is more financial than anything else. The Coronavirus pandemic caused the 2020 bullfighting season to be canceled, resulting in a loss of over $800 million to the bullfighting industry.

But when the industry petitioned the Spanish government for a subsidy to cushion the loss, outrage ensued, with Spaniards pointing out that it was unfair for the government to offer a bailout to “spectacles based on the abuse and mistreatment of animals” as most Spaniards struggled to survive.

In 2021, with nearly 52 percent of all Spaniards believing that bullfighting should be banned or otherwise lose its government funding, and with several eastern Spanish provinces outright banning the bloody sport, Víctor Barrio’s death has become a cautionary tale against holding on to what could be an antiquated tradition.

After learning about the horrifying death of matador Víctor Barrio, read about the death of tightrope walker Karl Wallenda. Then, take a look at these vintage photos of Spain before World War II.