Salvador Dalí left Catalonia for Madrid in 1922. These vintage Spain photos give us a peek as to what he might have seen in the capital city.

Salvador Dalí was born in Catalonia in 1904, and he moved to Madrid in 1922 at the age of 18. What did his country look like during those years? The photos below show a glimpse of Spain in the first decades of the 20th century. 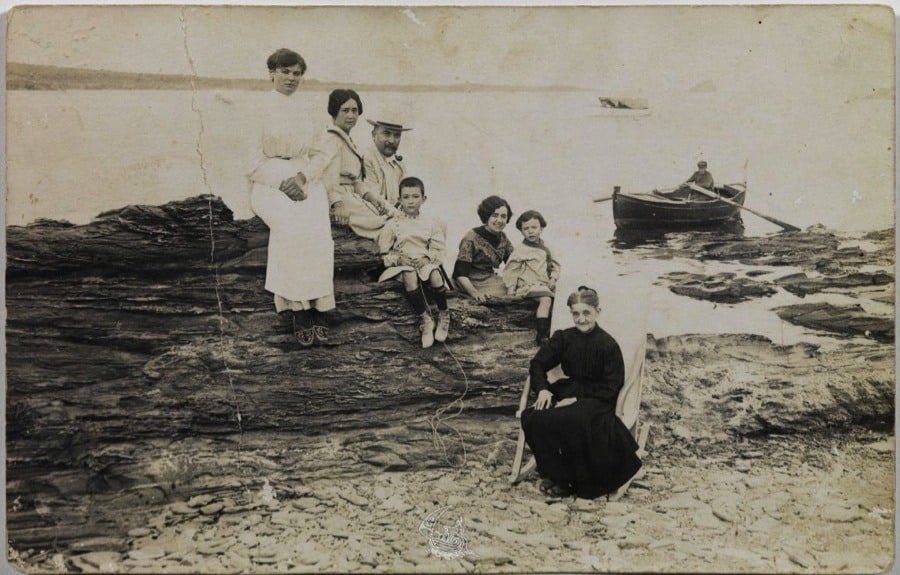 The Dalí family, when Salvador was six. The little surrealist is the boy with the buzz cut in the middle. (1910) Source: Salvador Dalí

It was a time of uncertainty, yet also an era of profound creative energy across Spain. In Madrid, for instance, Dalí fell in with a community of artistic luminaries and developed friendships with the poet Federico García Lorca and filmmaker Luis Buñuel. In Barcelona, the other great surrealist, Joan Miró, held his first exhibition in 1918. In 1923, a young American journalist named Ernest Hemingway ran with the bulls for the first time in Pamplona. Three years later, he published The Sun Also Rises. 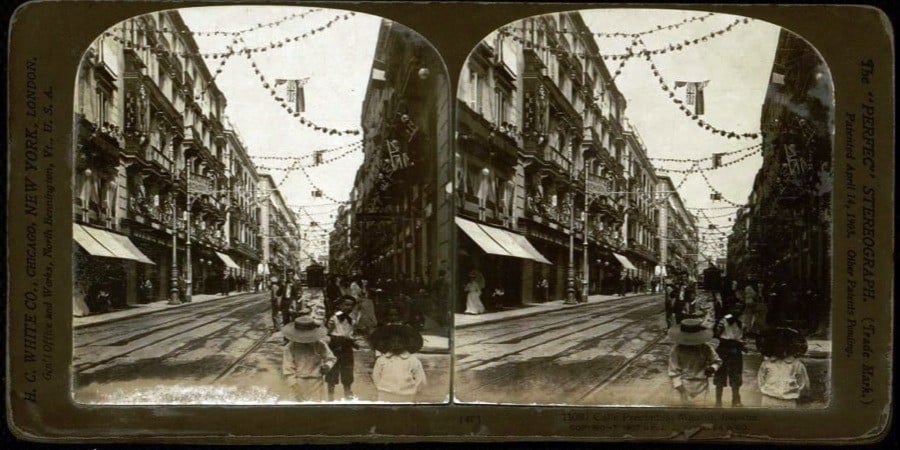 A stereoscopic image of Madrid at the dawn of the 20th century. (1906) Source: Viejo Madrid

But growing political and cultural rifts in the fabric of Spanish society were pushing the nation toward crisis. In 1936, Spain began a gruesome civil war. Like so many others, the poet Federico García Lorca was executed by firing squad and buried in an unmarked ditch. At the end of the conflict, General Francisco Franco took control of the country. His authoritarian regime would rule Spain for the next four decades. The scars from that era’s repression and isolation remain raw to this day.

After the Franco dictatorship began, the French writer and philosopher Albert Camus wrote in a letter to a friend,

“It was in Spain that [my generation] learned that one can be right and yet be beaten, that force can vanquish spirit, that there are times when courage is not its own recompense. It is this, doubtless, which explains why so many, the world over, feel the Spanish drama as a personal tragedy.”

The photos below show Spain as it was before that tragedy unfolded. 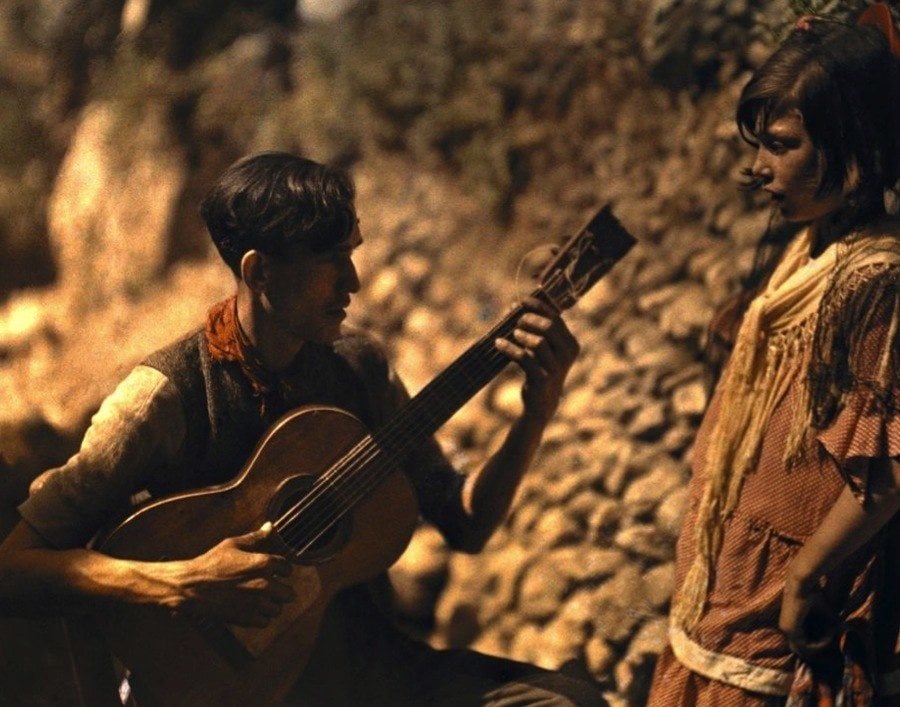 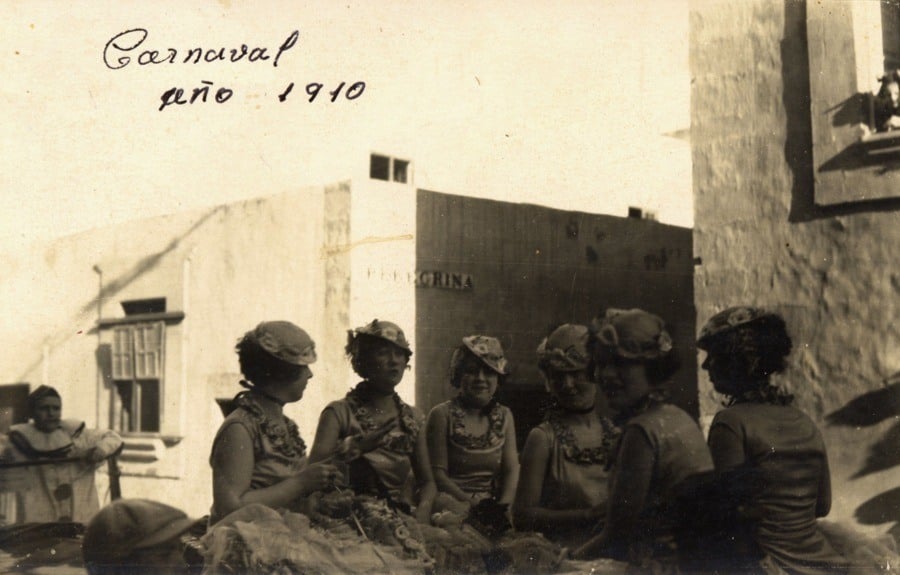 Young women dressed up in preparation for the Carnaval de Las Palmas de Gran Canaria, which has been celebrated for 500 years and continues today. (1910) Source: Wikimedia 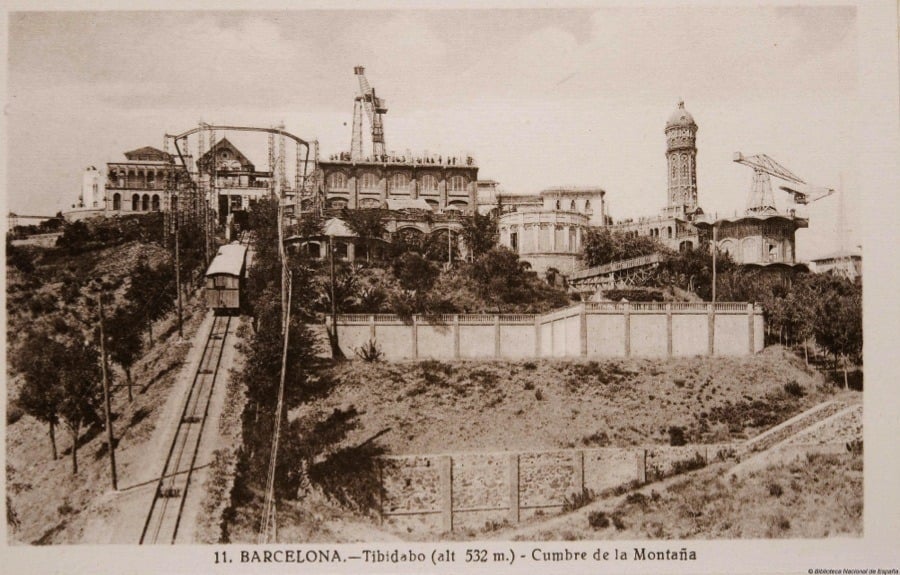 The newly built funicular climbing to the summit of Tibidabo, a mountain with views over Barcelona. (c. 1905) Biblioteca Nacional de España 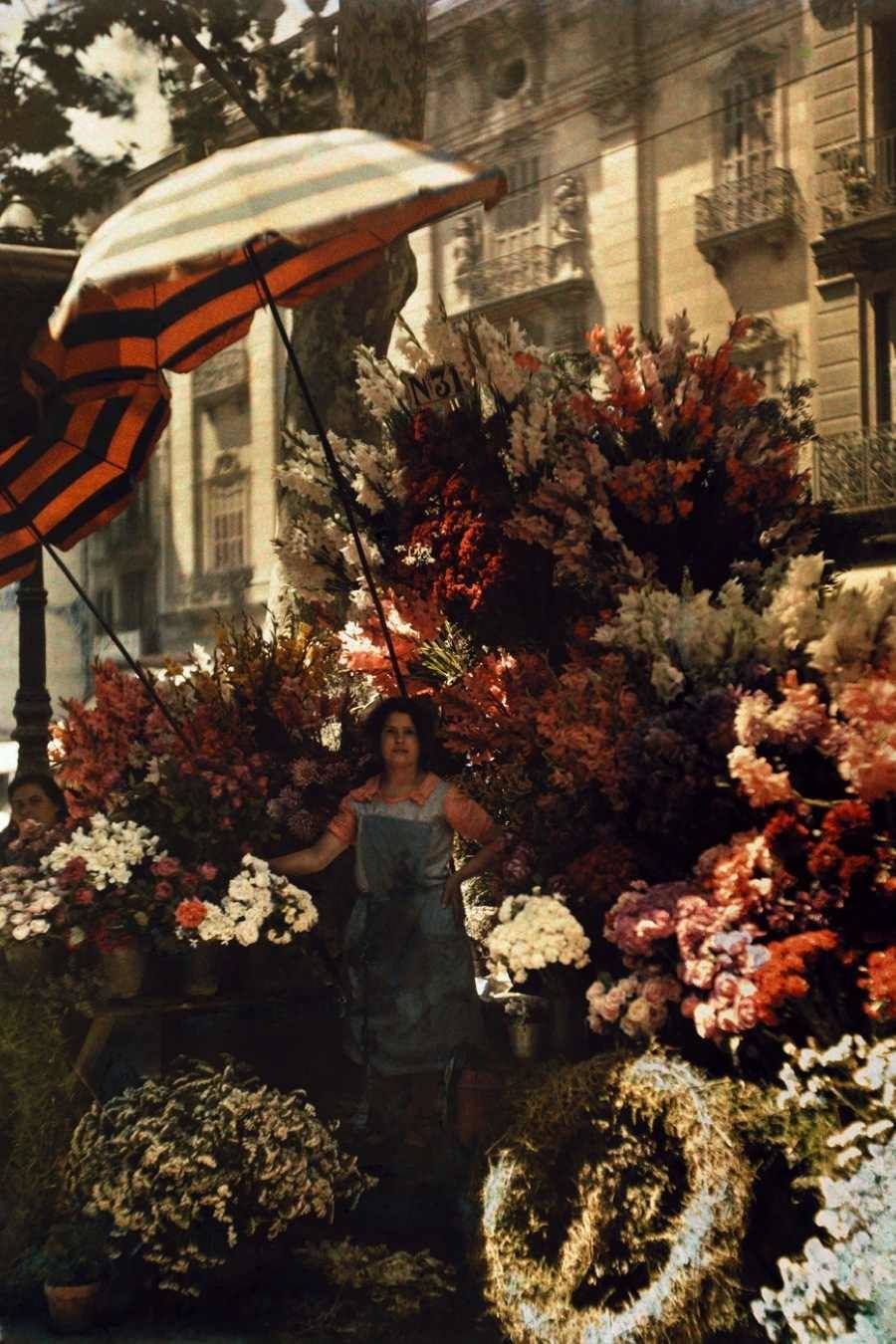 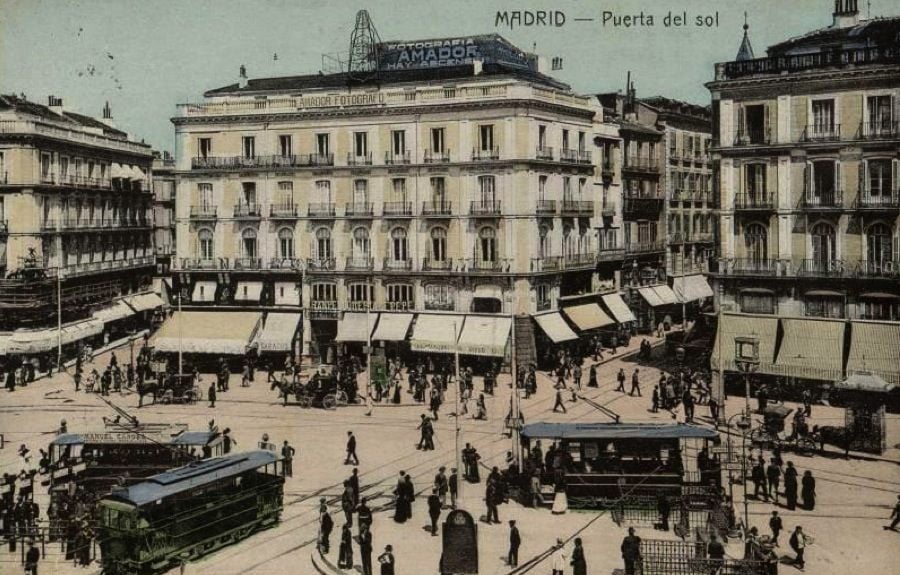 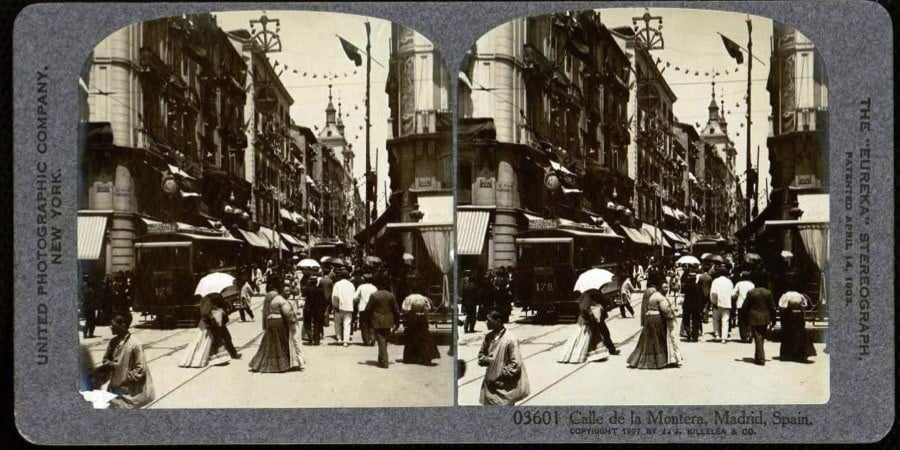 Madrileñas protecting themselves from the sun with umbrellas as they cross Calle de La Montera. (1907) Source: Viejo Madrid 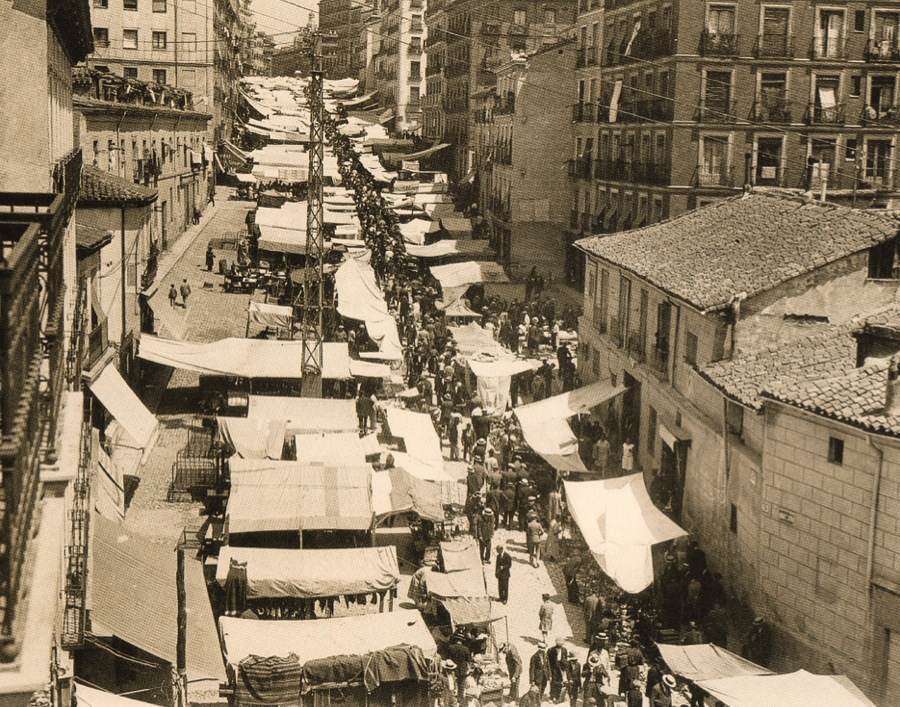 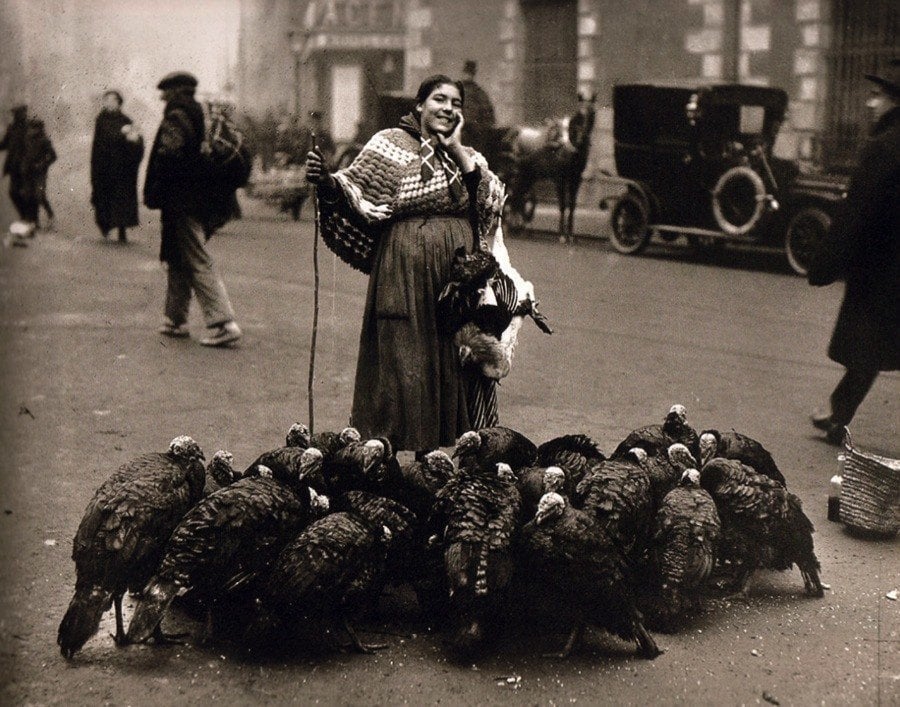 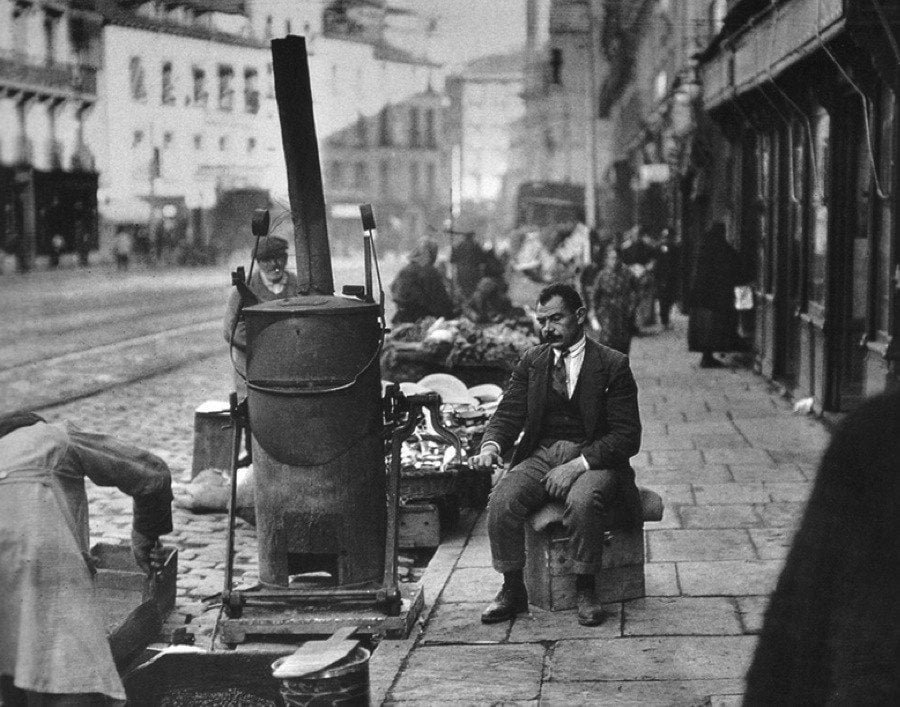 A man with a coffee roaster on the sidewalk of Calle Toledo, Madrid. (1920) Source: Viejo Madrid 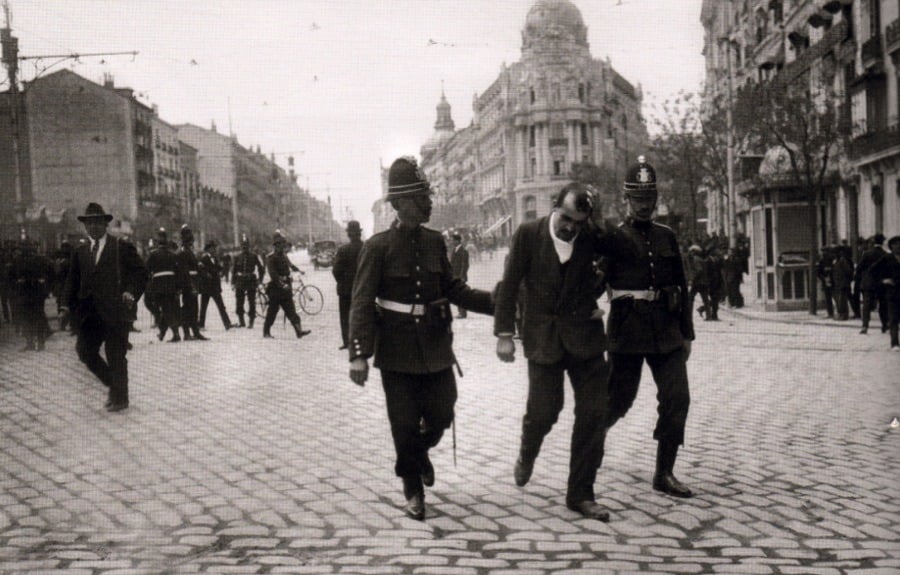 Police leading away an apparently injured man following protests in Madrid on May 1, with the Metropolis Building in the background. (1918)
Source: Viejo Madrid 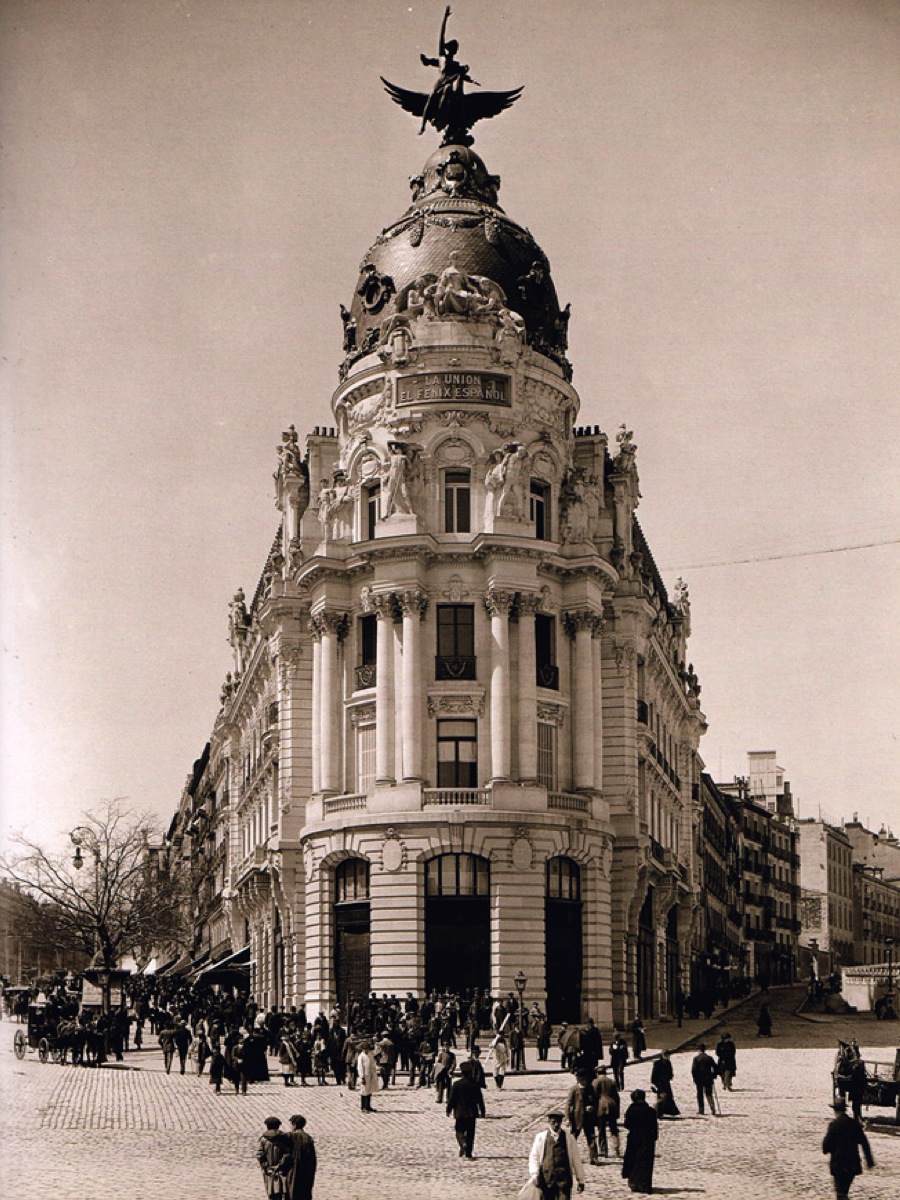 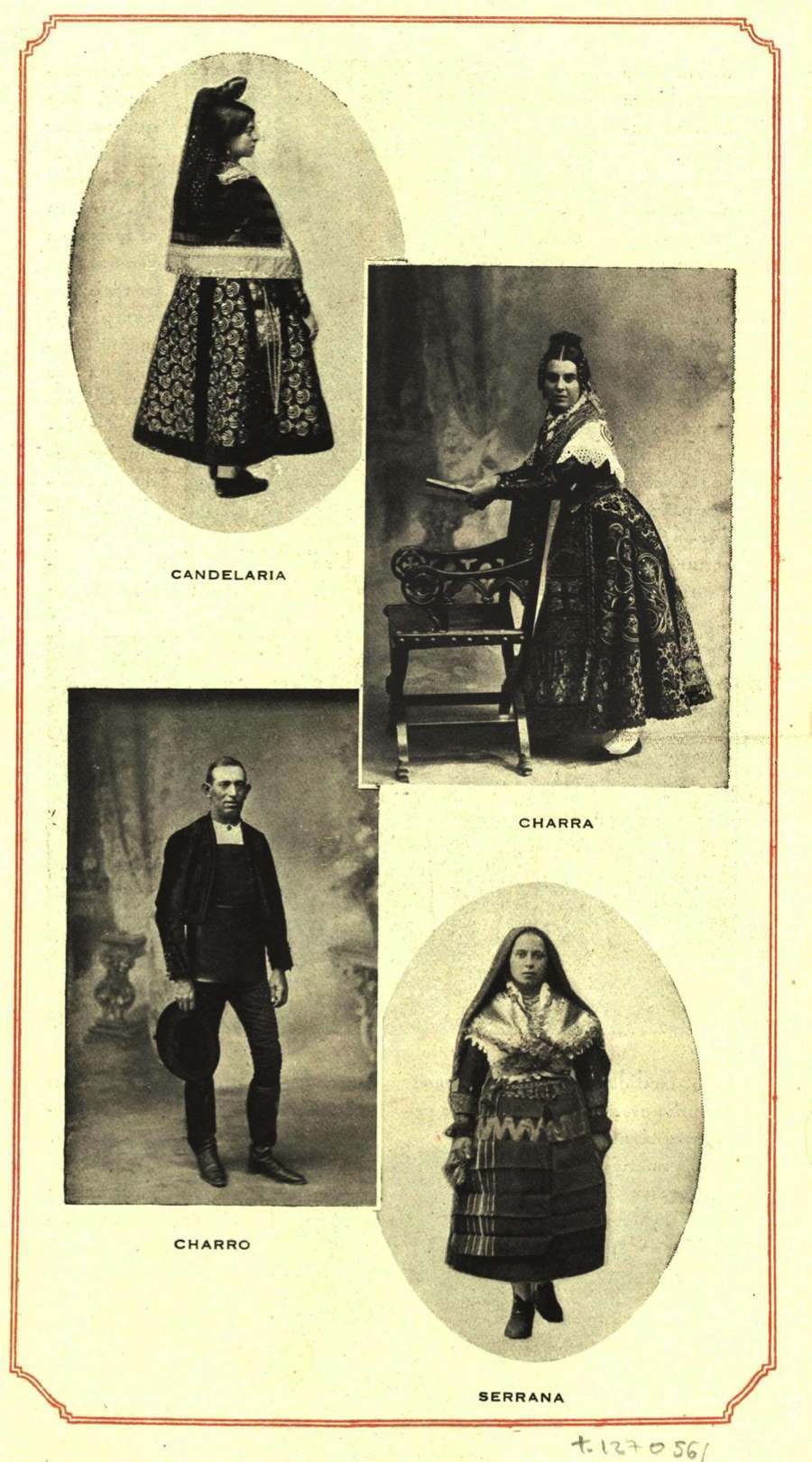 Popular clothing in Salamanca in the 1920s: the candelaria, the charra and charro, and the serrana as photographed by Venancio Gombau. (1928)
Source: Biblioteca Digital 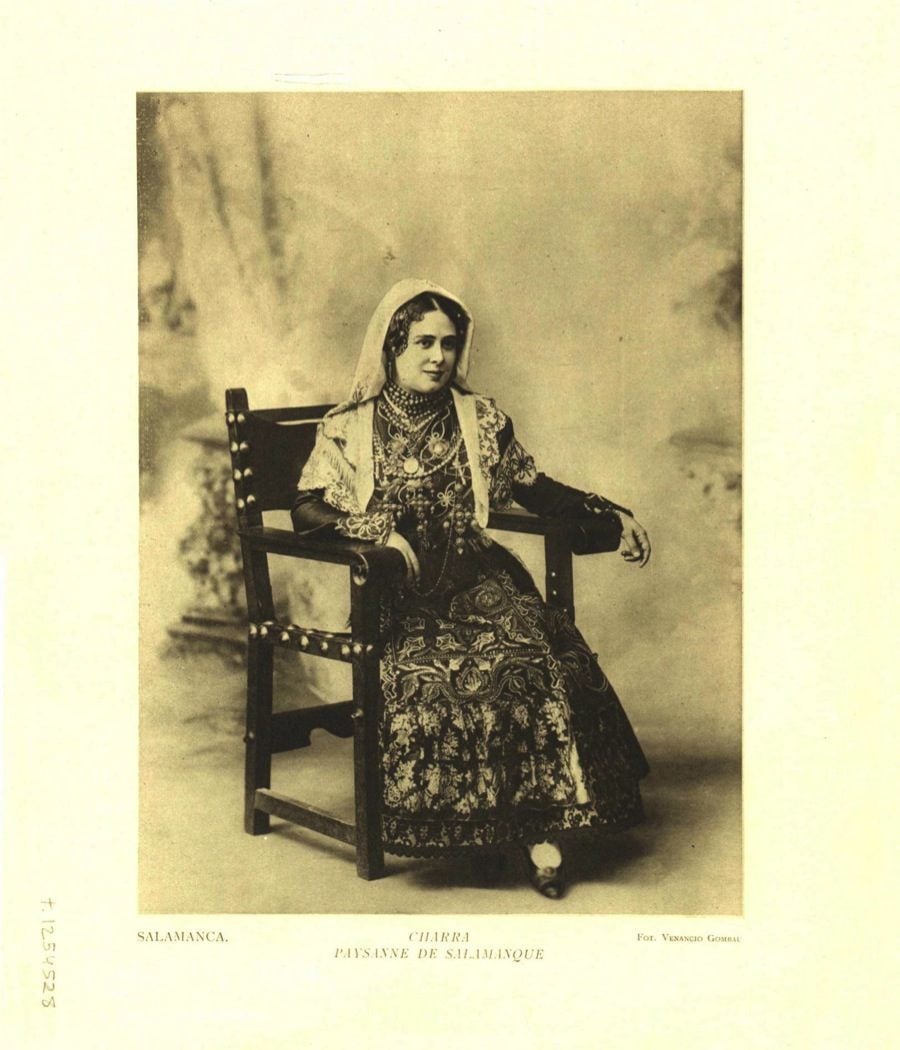 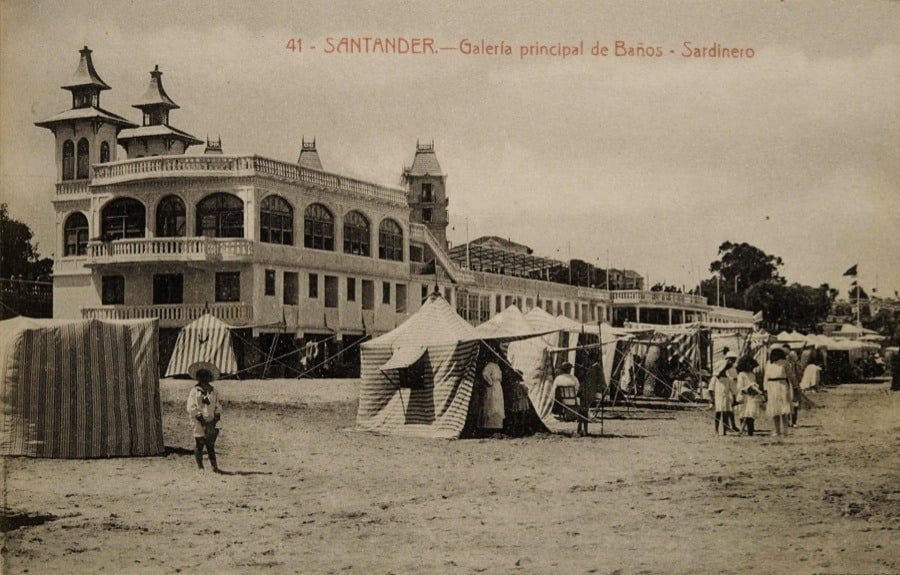 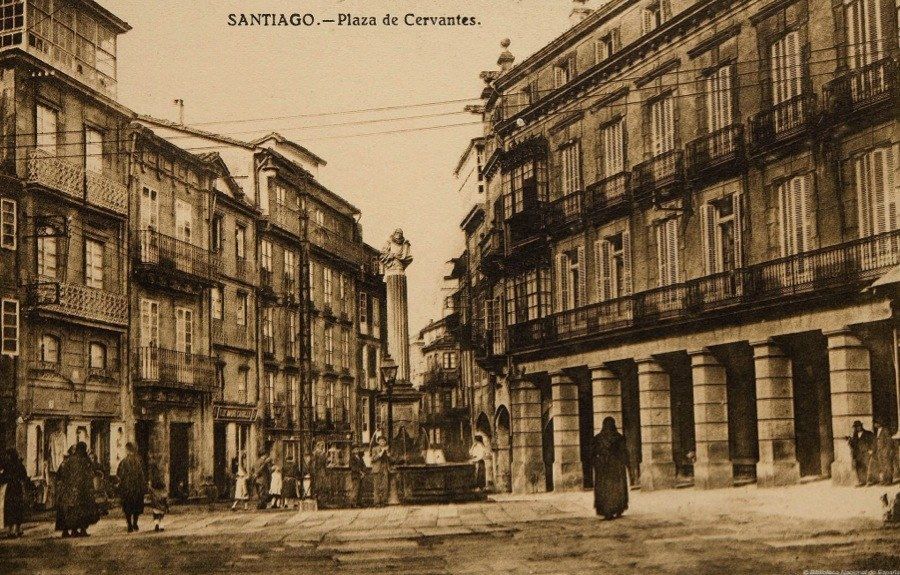 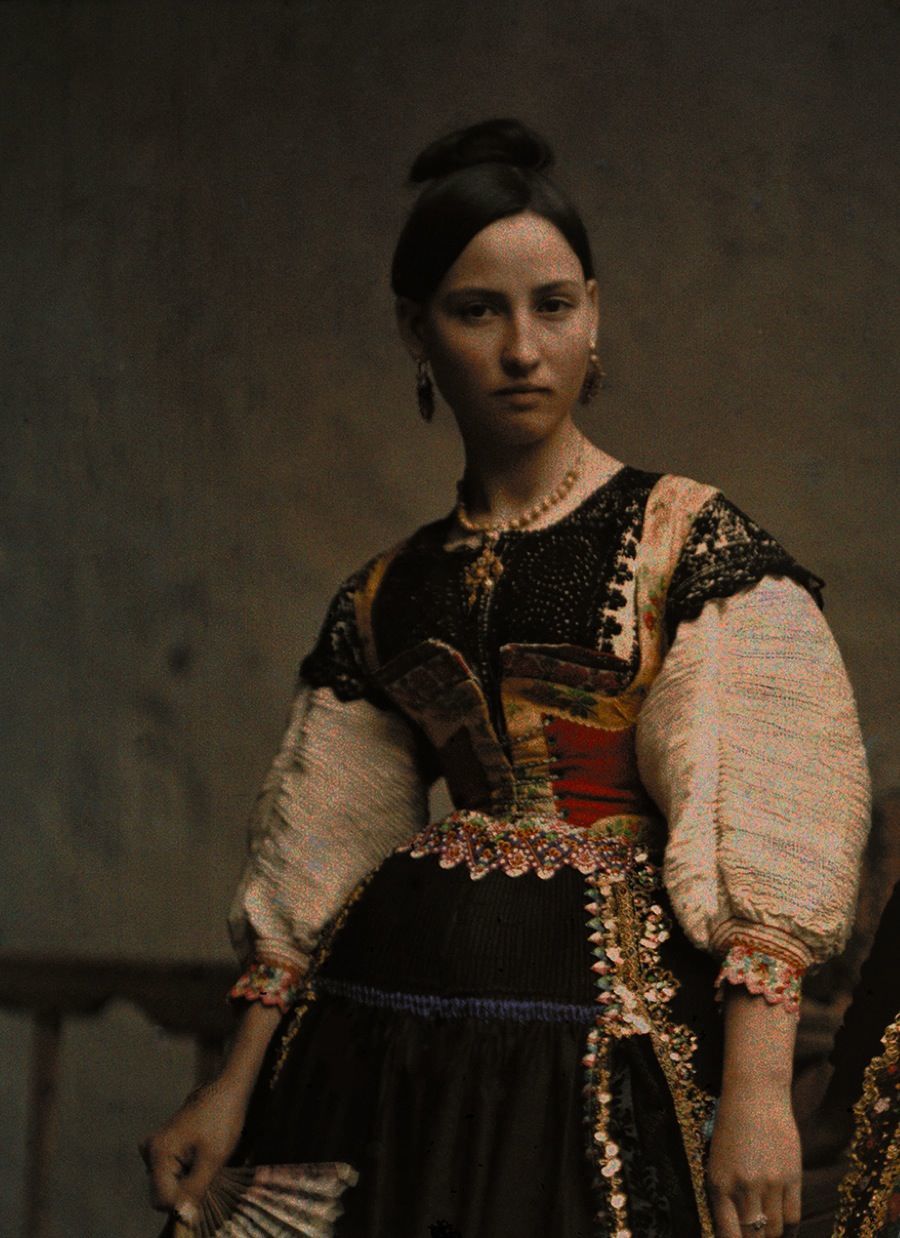 Jules Gervais Courtellemont’s autochrome portrait of a woman from the province of Toledo. (1924)
Source: Found