The Tragic Story Of Wu Yongning, The 26-Year-Old Daredevil Who Fell From A Skyscraper

On November 8, 2017, a young Chinese man named Wu Yongning tried to do pull-ups off the side of a 62-story building. It was the last decision he ever made. 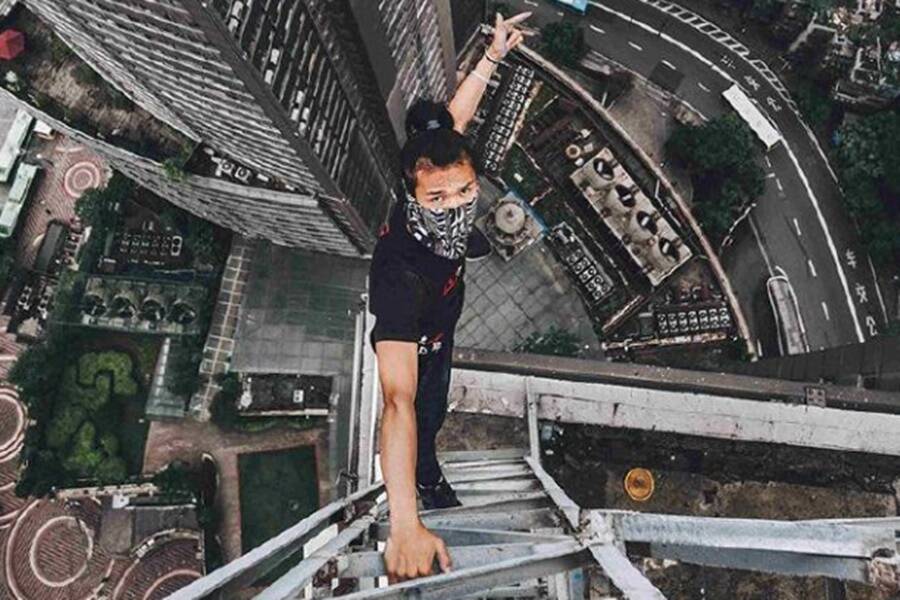 WeiboWu Yongning was a famous internet daredevil — until he tragically died during a stunt gone wrong in 2017.

Wu Yongning was an internet sensation who performed terrifying stunts atop tall buildings — and garnered a legion of fans. His videos, which often showed the popular stuntman hanging dangerously by his arms or legs high above the ground, racked up millions of views.

The intense videos also became a quick money-maker for the burgeoning internet star, who had planned to wed his girlfriend after he’d earned money from an especially dangerous “rooftopping” stunt in 2017. While dangling off the edge of a 62-story building in central China, the 26-year-old attempted to do his famous pull-ups.

Although he had plenty of experience “rooftopping,” he wasn’t prepared for what would happen if he lost his grip. So unfortunately, this stunt led to Wu Yongning’s death, which was eerily captured on video.

Who Was Wu Yongning? 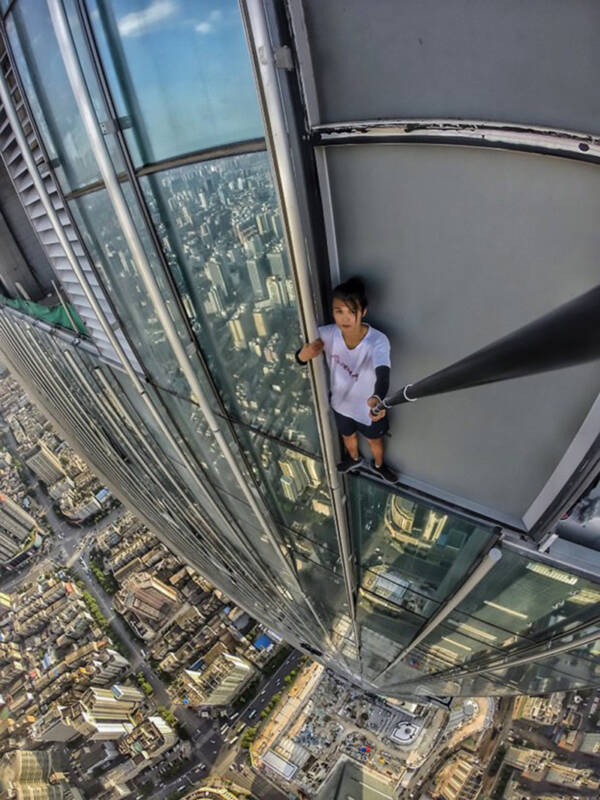 WeiboWu’s short videos and livestreams attracted a legion of followers on social media.

Wu Yongning was a climbing enthusiast from China who successfully made a name for himself as “China’s First Rooftopper,” a label for thrill-seekers who perform daredevil stunts atop tall buildings. These stuntmen frequently show off their latest nail-biting antics on social media apps, where millions of viewers watch and share their content.

Wu’s videos emphasized especially dangerous stunts from seemingly unscalable heights. He did pull-ups and sit-ups while dangling from tall buildings, scaled along narrow beams, and did somersaults and one-armed handstands near the edge of skyscraper structures. Even more shocking, he did all of these stunts without any safety equipment.

Sometimes, he appeared solo. But other times, the camera recorded him performing stunts as stunned witnesses looked on in disbelief. By 2017, Wu Yongning had posted more than 500 video clips and livestreams of his rooftopping acts on Huoshan, a popular Chinese platform.

Many building climbers like Wu Yongning perform their nerve-wracking stunts because of their addiction to the adrenaline-pumping sensation they get during these performances. But much of the motivation also comes from the financial rewards they can reap by doing these acts.

Wu Yongning had posted more than 500 videos of his rooftopping stunts before his death in 2017.

According to a report by Beijing News, Wu had accumulated more than a million online fans and earned more than 550,000 yuan ($83,000) from his viral videos. He also reportedly posted recordings of his stunts on many other platforms, such as Volcano, Huajiao, and Kuaishou. So it’s tough to know exactly how much money he may have made in total.

But outside of his daredevil antics, Wu Yongning was just a regular 20-something looking to settle down. According to his family, the building climber had been preparing to marry his longtime girlfriend.

Sadly, the couple never made it to the altar.

How Wu Yongning’s Death Was Caught On Camera

Daredevil Wu Yongning died while attempting pull-ups off the side of a 62-story building in November 2017.

On November 8, 2017, Wu Yongning prepared for his most daring challenge yet: rooftopping the Huayuan Hua Center in Changsha, the capital city of China’s Hunan Province. But unlike his previous stunts, this particular challenge proved deadly.

Doing one of his usual “pull-up” stunts, where he attempted pull-ups while dangling sky-high above the ground, Wu suddenly found it difficult to get himself back onto the building. After an agonizing 15 seconds, Wu ultimately lost his grip and plunged about 45 feet toward the ground. His body was later found on a terrace below by a window washer.

More gruesome still was that the terrifying final moments of his life were caught on his camera, which was set up to record his stunt. 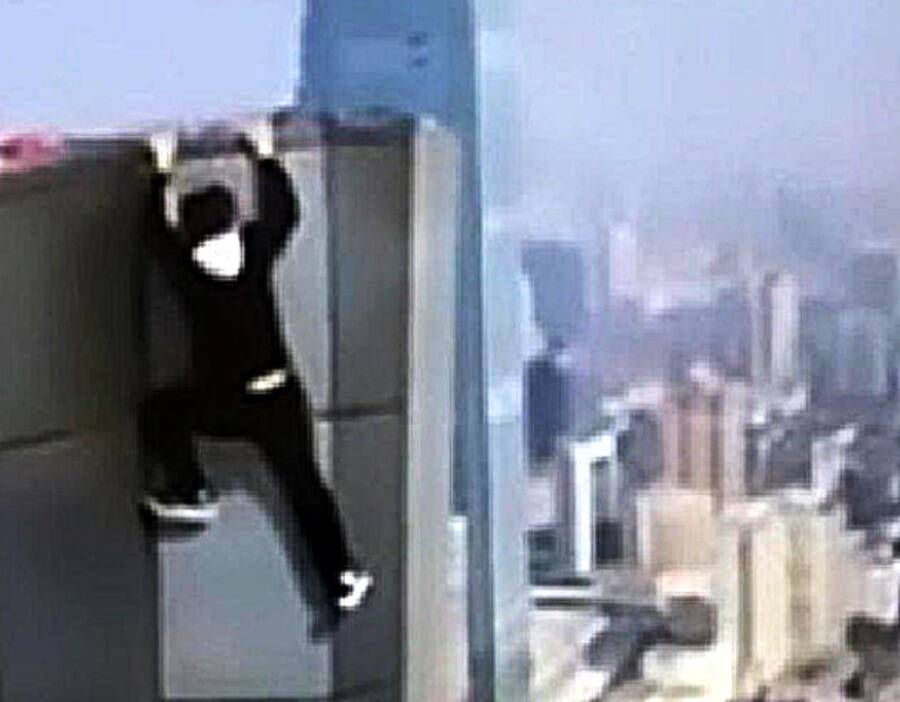 WeiboA scene from the video of Wu’s fatal stunt in November 2017.

Wu’s fatal fall was only made public after his fans began to question his absence on social media. His tragic death was confirmed by his girlfriend about a month after the fact — when word began to spread that Wu had died during one of his stunts.

Soon after the confirmation, the chilling video of Wu Yongning’s death began circulating on the internet.

Meanwhile, local news outlets reported that Wu Yongning had attempted the stunt to earn money — which was apparently offered as a reward in a contest. His family told the press that Wu was eager to win the 100,000 yuan reward — the equivalent of about $15,000 — to pay for his wedding and his mother’s medical bills.

It’s unclear which individual or which organization was sponsoring the competition that led to Wu’s tragic accident.

The Aftermath Of Wu Yongning’s Death 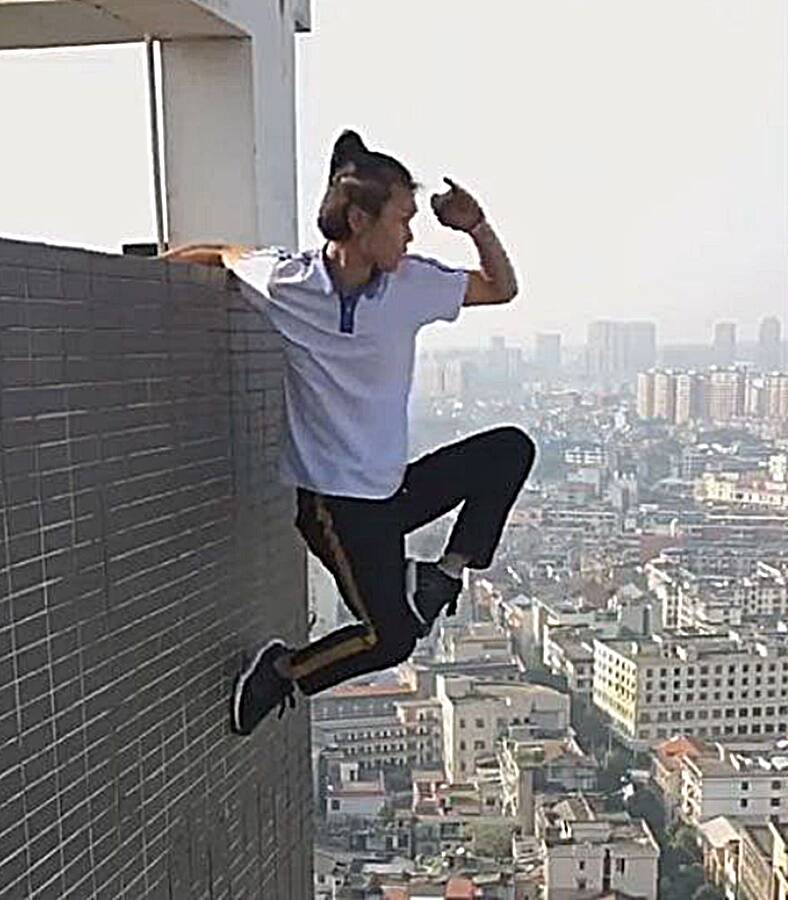 WeiboWu’s stunts often saw him hang precariously by his arms or legs without safety equipment.

The shocking video of Wu Yongning’s death led to conversations and debates about the ethics of “cash for clips” stunts.

Some condemned the video platforms for facilitating these dangerous acts in the first place. Some of Wu’s relatives claimed that certain platforms not only encouraged his stunts but financially backed some of the most dangerous ones.

One app called Huajiao was even ordered to pay 30,000 yuan or $4,300 to Wu Yonging’s family. A court in Beijing ruled that the video platform had failed to “ensure the safety and security” of the climber and was, therefore, partly responsible for Wu Yongning’s death.

Meanwhile, some observers blamed the fans who egg on these daredevils to continue their performances — and sometimes even supply them with cash donations. Certainly, Wu had several fans who encouraged him to keep it up.

“Watching him and praising him was akin to… buying a knife for someone who wanted to stab himself, or encouraging someone who wants to jump off a building,” wrote one user on the Chinese microblogging network Weibo.

Some Chinese publications saw the tragedy as an argument for more regulations on live-streaming platforms, which mostly remain outside of the government’s strict internet restrictions.

“Had Wu not been so popular on live-streaming apps, he might not have died,” argued an article in the state-run China Daily. “Some of them try to hype things up with obscene and dangerous things, and their purpose is to attract more eyeballs and make a profit. It is time we ended this.”

Wu’s death has done little to quell the popularity of daredevil stunts performed by thrill-seekers around the world. And, unfortunately, some of these thrill-seekers have also lost their lives in pursuit of the “ultimate thrill.”

In October 2015, Russian daredevil Andrey Retrovsky plummeted to his death after the rope that was keeping him from falling off a nine-story building broke. A few years later in 2018, Italian teenager Andrea Barone died after scaling a shopping center in Milan so he could take an “extreme selfie.”

As long as social media continues to be a quick way for people to earn more money and more “likes,” these dangerous viral stunts will, unfortunately, keep claiming lives.

Now that you’ve learned about daredevil Wu Yongning, read about parkour stuntman Pavel Kashin’s final jump that killed him. Then, meet Karl Wallenda, the famous tightrope walker of the 1970s who fell to his death.