Buyers are already offering $10,000 for this astounding piece of agate quartz, though its owner isn't sure whether he'll sell or not. 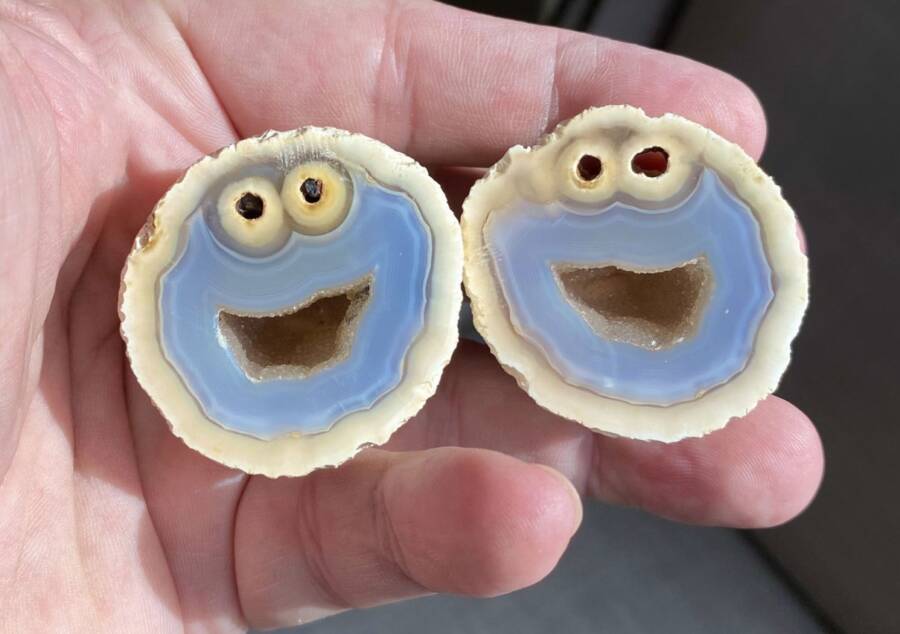 Kennedy News & MediaIn the words of the stone’s owner, it’s “probably the most perfect Cookie Monster out there.”

Over the years, geologist Mike Bowers of California has seen all kinds of astounding gemstones. But this stunning piece of agate rock he recently got his hands on is unlike anything he — or anyone else — has ever seen.

While its craggy tan exterior may look thoroughly unremarkable, the rock’s interior is a dead ringer for none other than Sesame Street‘s beloved Cookie Monster.

Bowers first shared the stone with the world in a Facebook video posted on January 16, which has since been viewed more than 630,000 times. The video shows Bowers opening up the small, egg-shaped stone to reveal the Cookie Monster-esque quartz crystals within.

Though Bowers made sure to draw the connection between Cookie Monster and his spectacular find by scoring the video with one of the puppet’s songs, there’s no doubt that viewers recognized the uncanny likeness to the iconic Muppet on their own.

The patterns of light blue, off-white, and golden-brown crystals create a near-exact replica of Cookie Monster’s wide eyes and gaping maw. As Bowers himself told The Sun, “This is probably the most perfect Cookie Monster out there.”

The 55-year-old geologist specializes in agate and has seen his fair share of interesting gemstones, but this one has left him particularly stunned.

“This is very unusual,” he said. “There are a few famous agates out there: the owl; the scared face. But it is rare to find one so well defined like this.” 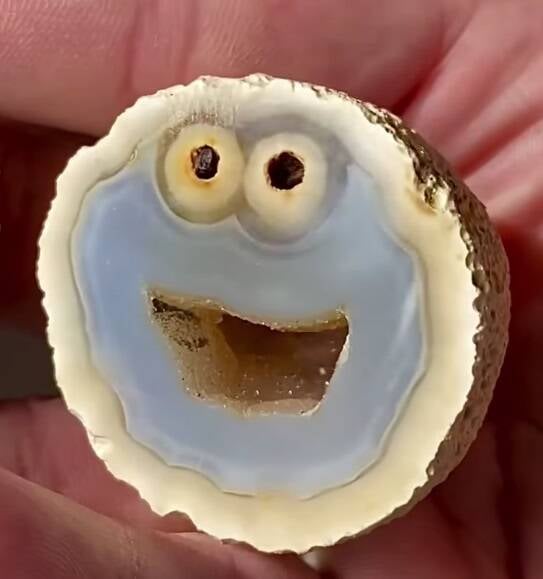 Kennedy News & MediaA close-up of one half of the now-famous Cookie Monster agate.

The world is certainly in agreement. In a matter of days, Bowers says he’s already received five offers from would-be buyers willing to pay up to $10,000 for this one-of-a-kind rock. “Prices can be very high,” Bowers confirmed.

However, Bowers isn’t yet sure whether he’ll sell or not. Bowers also hasn’t revealed what he may have paid to acquire the rock from its original owner.

The Cookie Monster crystal was first unearthed by a geologist named Lucas Fassari who was working in the ancient volcanic cavities of the Rio Grande do Sul region of southern Brazil in November. But after the crystal was found there, its path to Bowers remains unclear at this point. 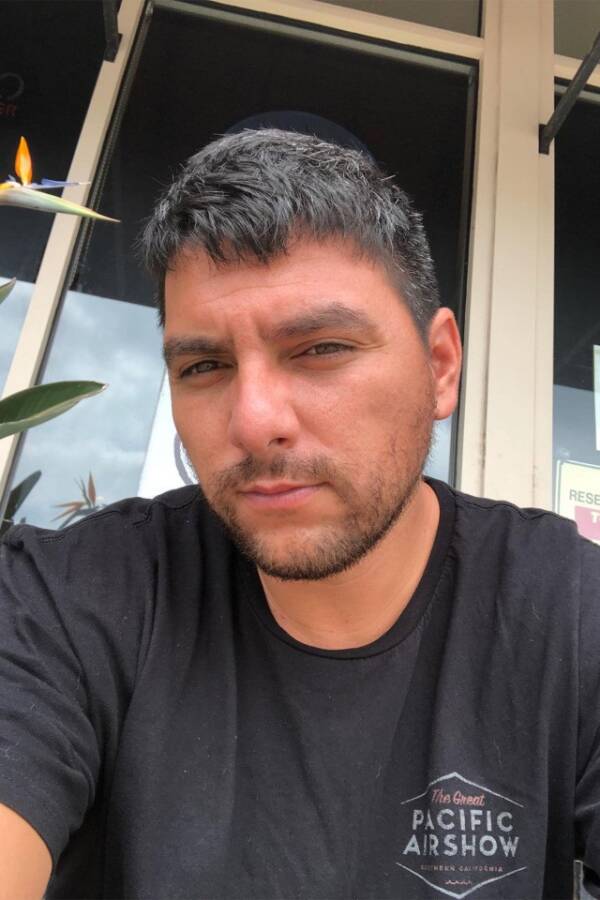 As for how rocks like this are formed in the first place, agate is born in the cavities within volcanic rocks. According to Penn State geosciences professor Peter Heaney, “Volcanic rocks that erupt to the surface and harden contain a lot of water and carbon dioxide, which will bubble out. It’s exactly the same as how Swiss cheese is formed. The rock is filled with holes.”

Then, water filled with minerals will eventually seep into those holes. Once inside, the minerals will crystallize and harden while the water dissipates over time.

When the mineral in question is something like quartz, the crystallized pattern that’s left behind can present in any number of dazzling shapes and colors, depending on the other elements trapped inside, which can range from iron to titanium to nickel. Unsurprisingly, stones like these have been coveted, traded, collected, and sold since the time of the ancient Greeks, if not earlier. 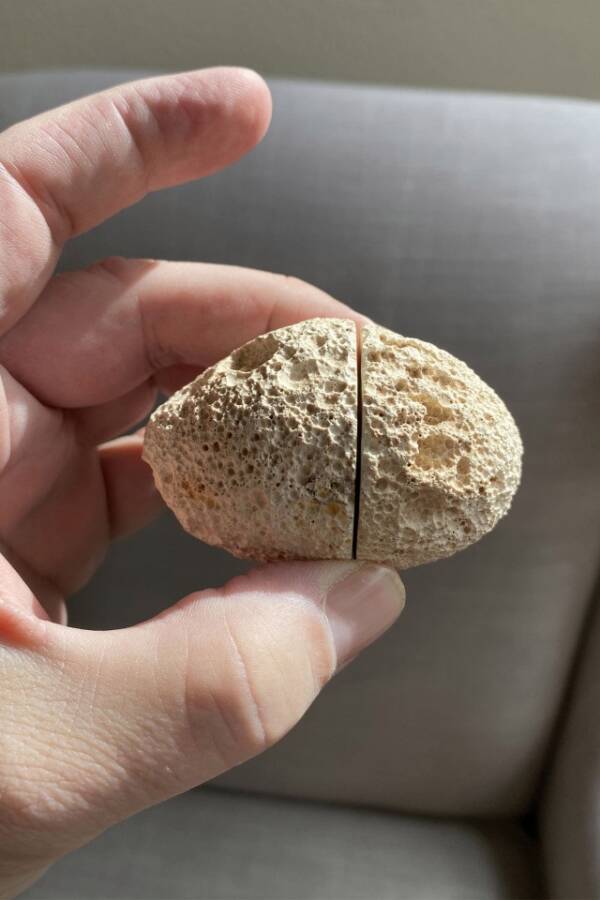 Kennedy News & MediaThe humble exterior of the so-called “Cookie Monster rock” gives no hint of the incredible likeness hiding inside.

So, all the fuss and frenzied bidding over the newly-found Cookie Monster gemstone is nothing new. But still, after all this time, scientists are largely baffled as to all of the specifics of agate’s formation process.

As Heaney told the Peninsula Clarion, “Agates are one of the few gem materials that have not been successfully synthesized, even today. So nobody knows exactly how agates formed. After many decades of studying crystal growth, I regard agates as the most complex example of hierarchical pattern formation in minerals, and most of the complex patterning is not even visible to the naked eye.”

While we have some idea of how Cookie Monster’s face appeared in this small Brazilian rock, the truth is that even the experts couldn’t explain it completely. Who knows what other faces, shapes, and patterns are sitting out there, defying explanations, inside humble-looking rocks the world over.

Next, read up on Carmeltazite, the extraterrestrial harder than a diamond. Then, learn the story of the infamous curse of the Hope Diamond.