The Vinland Map, formerly dated to the 15th century, was believed to be the oldest European depiction of the Americas. 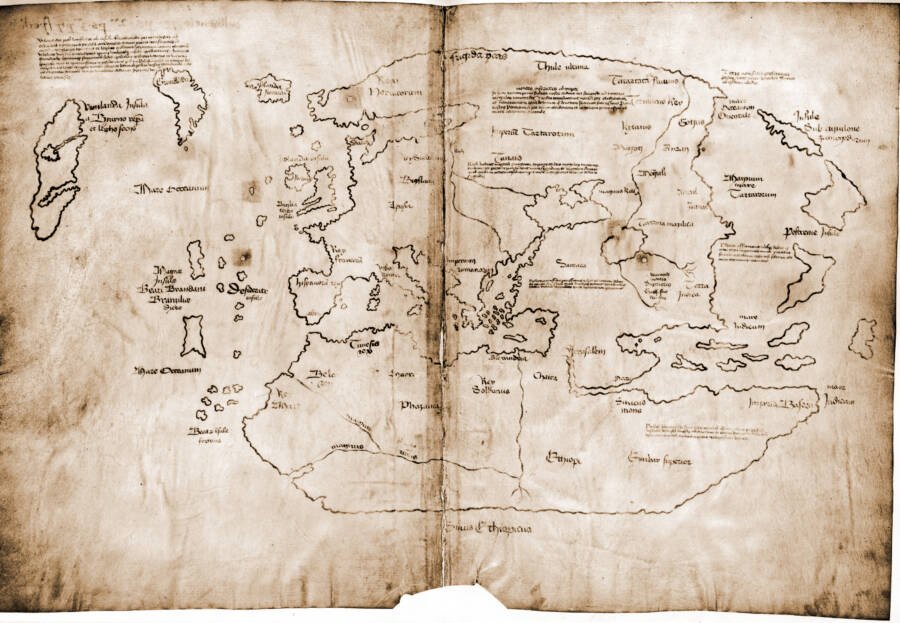 Wikimedia CommonsThe Vinland Map was formerly thought to have been created in 1440 A.D.

The Vinland Map has mesmerized historians for over half a century. It was thought to be one of the oldest maps of America and the first European depiction of Viking travels to the New World. It accurately depicted Greenland and was dated to 1440 A.D., 52 years before Christopher Columbus arrived on America’s shores.

Historians have no doubt that a small group of Vikings reached Newfoundland as early as 1000 A.D. The remains of a Norse settlement called L’Anse aux Meadows proved as much, with 13th-century written sagas chronicling their voyages. Since 1965, the Vinland Map appeared to be an authentic testament to those events.

According to a 2021 statement from Yale University, however, a new university study has found the map to be a forgery. As one of the institution’s prized possessions, the Vinland Map had been put on display and heralded as a landmark find for decades. But now, after decades of doubts about its authenticity, researchers have conclusively discovered that the ink it was written with couldn’t have been made before the 1920s.

The Tangled History Of The Vinland Map

The earliest historical traces of the Vinland Map date back to 1957. It was three years before researchers discovered the Norse site of L’Anse aux Meadows, when an antiquarian from New Haven, Connecticut, named Lawrence Witten said he purchased the map from an unidentified source in Europe. 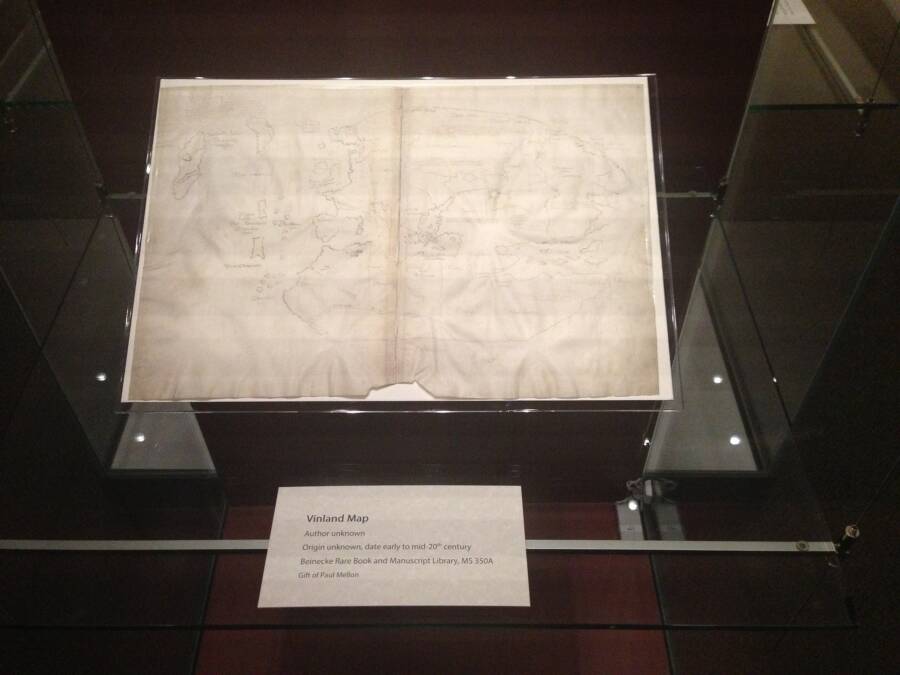 The Vinland Map was bound in a medieval book called the Hystoria Tartarorum (or Tartar Relation), which has since become an invaluable artifact in its own right. For Witten, the map was merely an investment. He tried selling it to the British Museum, who rejected his offer, and then sold it to a man named Paul Mellon.

As a well-intentioned philanthropist, Mellon donated the Vinland Map to Yale University which unveiled the parchment in 1965. It was then that the school’s researchers dated the map to 1440, published a book on their newfound treasure, and saw newspapers chronicle the colossal ramifications of its authenticity.

The Vinland Map had thrown a proverbial monkey wrench into countless fields of academia. It had accurate depictions of North America’s coastline southwest of Greenland, and bolstered the nascent notion that Vikings had used maps to arrive in regions like Newfoundland — and did so far earlier than Columbus.

It didn’t take long for the tides to turn, however. According to NPR, researchers from McCrone Associates deemed the map a forgery in 1973. While Yale University appeared to backtrack in its confidence a mere year later, the school plainly stated that the Vinland Map “may be a forgery” but didn’t commit — until now.

The study of the Vinland Map conducted by Yale University used “state-of-the-art tools” that had previously been unavailable to researchers — and found the map used ink that post-dated it. Ultimately, it was a titanium compound that betrayed the map’s authenticity, as it wasn’t even produced until the 1920s. 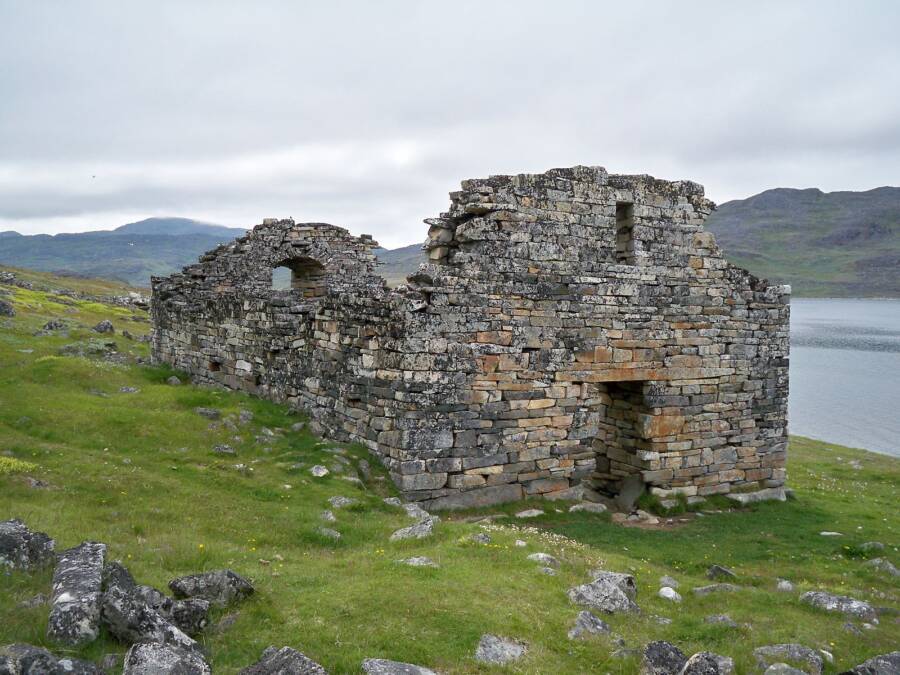 Wikimedia CommonsThe Hvalsey Church in Newfoundland, one of the remnants of the Norse settlement predating Columbus’ arrival.

“The Vinland Map is a fake,” said Raymond Clemens, the curator of Yale University’s Beinecke Rare Book & Manuscript Library. “There is no reasonable doubt here. This new analysis should put the matter to rest.”

Researchers also pointed to a Latin inscription on the back, which was found to have been overwritten in the same type of 20th-century ink. The press release is firm in reminding readers that the Tartar Relation book remains entirely authentic, however, and contains authentic ink from its time.

“It’s powerful evidence that this is a forgery,” said Clemens of the inscription, “not an innocent creation by a third party that was co-opted by someone else, although it doesn’t tell us who perpetrated the deception.”

Experts in the fields of Scandinavian and Norse studies have long suspected the Vinland Map to be a hoax. The fact that it was first publicly deemed a forgery in 1973, with Yale University itself appearing to hedge its bets a year later, certainly didn’t boost any confidence.

“No one in the actual field of Norse studies or Vinland studies has believed in the authenticity of the map for a long time,” said Gisli Sigurdsson, a professor of Norse studies at the Arni Magnusson Institute in Iceland.

The Ramifications Of The Vinland Map Forgery

While it appears rather clear that the Vinland Map was at least partially forged, the mystery has only just begun. Researchers like Dr. Elizabeth Rowe are attempting to decipher why somebody faked it. As an associate professor of Scandinavian history at Cambridge University, she has some insight.

“[The forgery may have been motivated by a] desire to enhance the international importance of Viking Age exploits at a time when Norway was one of the most impoverished countries in Europe,” she said.

Ultimately, it appears that a new investigative challenge has emerged for researchers and historians. With experts determining when the ink was first produced and standardized, historians can research where the map might have been produced. As for the reasons why it was forged at all, theories have begun to abound. 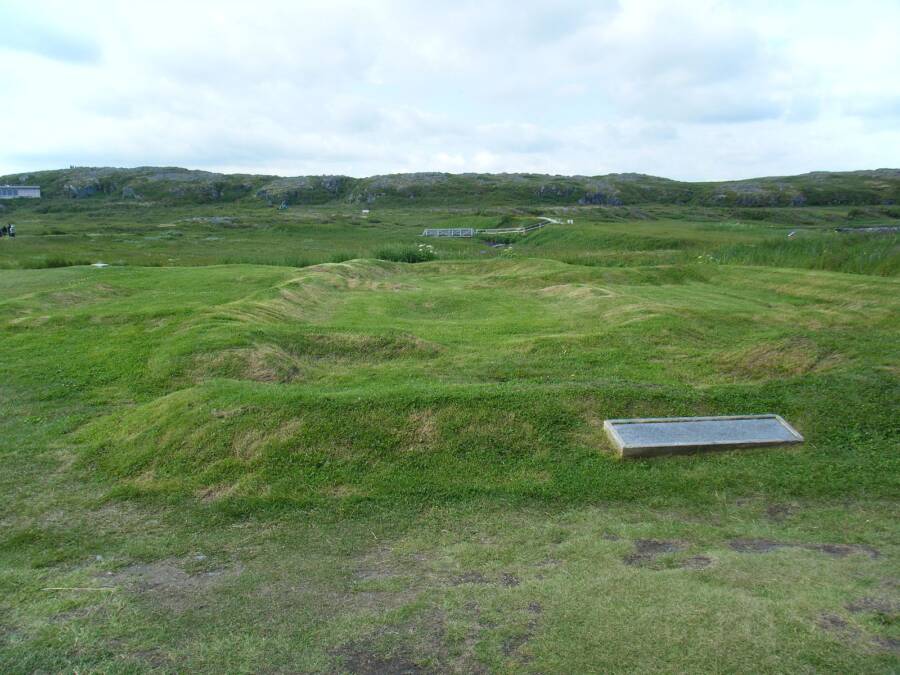 “The Vinland Map is just one in a long series of forgeries that are about demonstrating a medieval European presence on American soil,” said Dale Kedwards of the Arni Magnusson Institute. “It’s used to undermine Indigenous First Nations history, and is tied with the kind of partisan, nationalist historiography that develops in Europe.”

For Dr. Rowe, meanwhile, the new study has proven to be a godsend in her personal quest to garner as clear a picture of Scandinavian history as possible. She found it “deeply satisfying to have the strongest possible scientific confirmation of the historians’ longstanding arguments that the Vinland Map had to be a forgery.”

In the end, it took more than half a century for the experts to agree on the matter. Who knows what other revelations regarding the Vinland Map are still to come.

After reading about the Yale University study that deemed the Vinland Map a fake, learn about Viking explorer Leif Erikson. Then, read about the real history of who “discovered” America.