"I would rather drink your social media persons piss than coconut water." 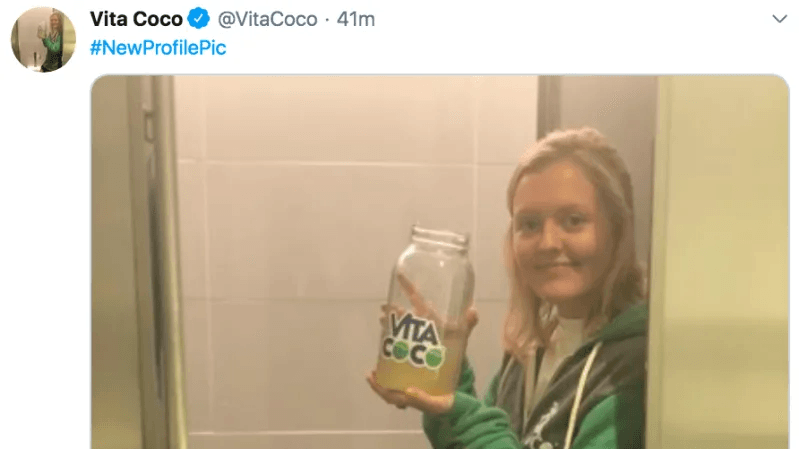 TwitterA photo shared by Vita Coco on Twitter appearing to show their social media manager holding a jar of urine.

It’s no secret that food brands like Wendy’s and KFC have begun to utilize their social media platforms to engage directly with customers in increasingly playful ways. But how far will these brands go to make a splash? Apparently, for Vita Coco coconut water, offering customers pee in a jar is not off limits.

The brand set the internet ablaze on May 15 after a bizarre exchange between their official Twitter account and amateur MMA fighter-turned-blogger Tony Posnanski.

The exchange started innocently enough, if a bit heated. Vita Coco’s Twitter (which, before the pee jar incident, had rarely tweeted) had replied to an old tweet from Posnanski that listed all of his so-called “unpopular opinions,” one of which involved his take on coconut water.

“Coconut water is disgusting. Even if it is from a baby coconut,” he wrote. Vita Coco then tweeted back its own take.

“Unpopular Opinion: there is such a thing as too many eggs,” Vita Coco replied, in reference to Posnanski’s Twitter bio touting him as an owner of an all-you-can-eat egg restaurant.

This exchange continued to escalate when Posnanski added another tweet to the conversation about how he had devoted time to write an entire piece about how terrible coconut water is. He provided a link to his 2014 Huffpost article, simply titled “Coconut Water Is Disgusting.”

To make his already crystal clear point even clearer, Posnanski also warned the coconut water brand that he would not be dissuaded from his opinion in any way: “…don’t come at me with your shit is pressed or comes from the finest baby coconuts. Your shit is nasty like all coconut water.”

The “pressed” part was in reference to the brand’s new product variety that had just launched, called Pressed Coconut Water. The new product is allegedly supposed to taste like real coconuts rather than just coconut water.

Not wanting to let the Twitter exchange go, the brand offered to send Posnanski some samples to try out, but Posnanski refused.

“Fuck that. Save that nasty shit for someone else. I would rather drink your social media persons piss than coconut water,” Posnanski tweeted back.

And that is when the brand decided to take things to the next level. Unexpectedly, the brand sent out a photo to Posnanski via Twitter, showing Vita Coco’s social media staffer Lane Rawlings. 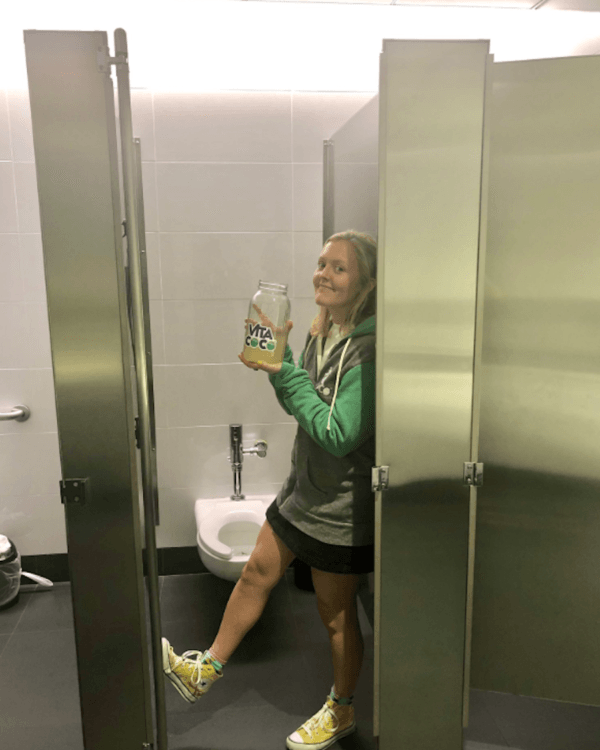 Vita Coco/TwitterVita Coco’s rep confirmed that it was real pee.

Rawlings posed in front of a bathroom cubicle and was holding a jar labeled VITA COCO filled with what appeared to be a jar of urine. “Address?” the accompanying caption read.

Of course, the brand’s pee jar stunt quickly went viral, and responses were mixed. While some found the stunt to be too much, others focused on the intended humor.

Brands either fall flat or score big when taking risks like this on social. I found this hilarious.

I also now know who Vita Coco is: She’s a blonde woman who puts fluids in jars 😄 https://t.co/rMdLpwsALt

Whatever the consensus might be, so far, the pee jar tweet has garnered almost 3,000 retweets and 20,000 likes. Vita Coco Brand Director Allison Finazzo said that the pee jar — and the exchange with Posnanski — was completely organic.

“We don’t take ourselves too seriously, and we’re an independent company, so when something feels right, we just do it,” Finazzo told Vox.

However, the initiation of the exchange was in fact part of a larger marketing campaign meant to boost awareness of their new pressed product which Finazzo described as “like an Almond Joy.” The “Impossible to Hate” marketing campaign includes social media outreach to critics or “haters” who have criticized the white milky beverage through the brand’s official channels.

Before the brand started conversing with Posnanski, it was already replying to a bevy of other old tweets about its product.

Now that the air has been cleared, people are still wondering: Was it real pee? According to Finazzo — and screenshots from reporters who inquired — the liquid in the jar was really Rawlings’ pee.

“It actually is. She went to the bathroom,” Finazzo said, adding: “I cannot confirm or deny why the pee is the color it is.”

Next, read the story of the woman who found squid-like goo in her coconut water and caused a ruckus on the internet. Then, learn about the surprising personalities behind America’s fast food empires.