The 1965 film told the story of the musical von Trapp family that fled the Nazis in Austria, but there were a few key points that Hollywood either changed or left out entirely. 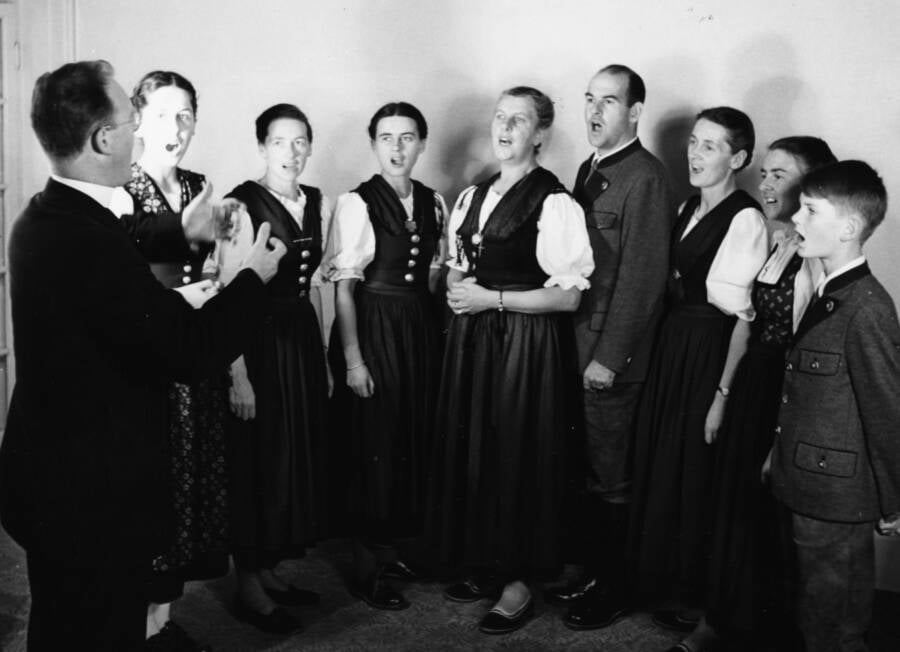 Most people have seen The Sound of Music, the beloved 1965 film that told the story of a loving governess, a gruff widower, and their musical family during the rise of the Nazis. But though the film is fiction, it’s based on the real-life story of the von Trapp family.

Just like in the movie, the von Trapp family was made up of a widower, his large brood, and a would-be nun named Maria. Like in the movie, the family began to sing together and eventually decided to leave their native Austria for the United States as Adolf Hitler gained power in Europe.

But the real von Trapp family has insisted that they’re different from their fictional counterparts. And though the film is based on their lives, the true story of The Sound of Music differs from history in numerous ways.

Like in The Sound of Music, the story of the von Trapp family begins with a woman named Maria, whose real name was Maria Augusta Kutschera. Born in 1905, the real-life Maria grew up in a secular family but became enchanted with religion after accidentally attending a Palm Sunday service.

According to the National Archives, Maria left the State Teachers’ College of Progressive Education in Vienna and entered the Benedictine Abbey of Nonnberg in Salzburg in hopes of becoming a nun. But there, like in The Sound of Music, Maria was a “problem” that the nuns struggled to “solve.” 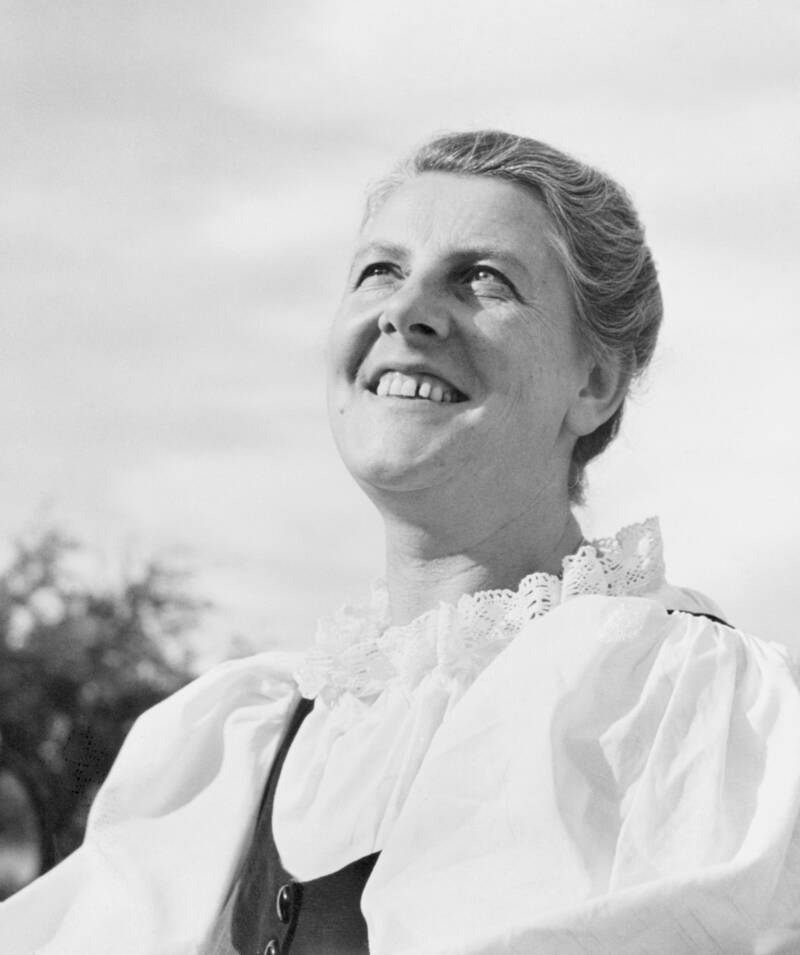 “I was horrid, the worst you can imagine,” Maria recalled in 1980. Not only did a lack of fresh air and exercise make her sick, but Maria remembered breaking china, speaking when she wasn’t supposed to, running through the courtyard, sliding down banisters, whistling Gregorian chants, and climbing on the convent roof.

When a World War I hero named Baron Georg von Trapp approached the nuns in hopes of finding a tutor for his sick daughter, also named Maria, the sisters swiftly volunteered their local troublemaker.

Like in The Sound of Music, Georg was a widower with seven children. But his family has rejected his depiction in the film as gruff and uncaring. In real life, he was warm-hearted and encouraged his children’s singing. 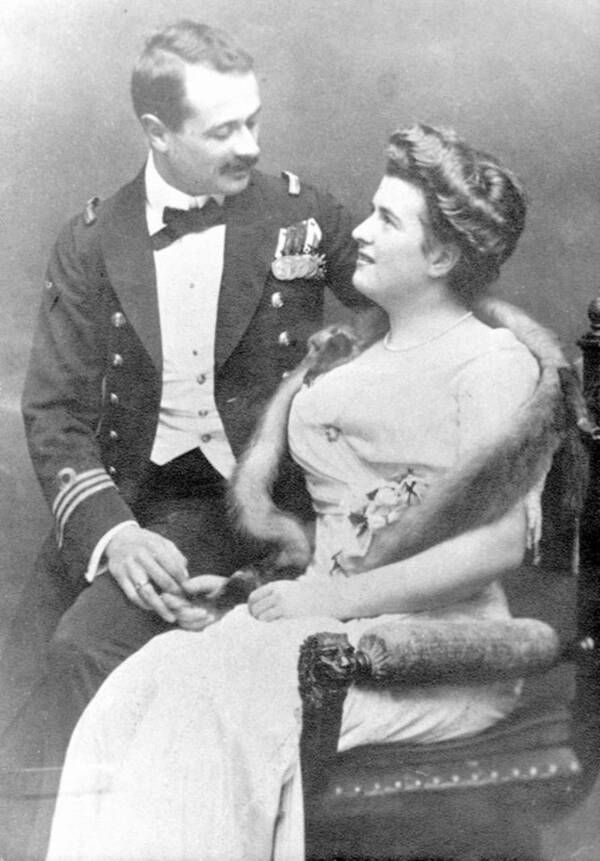 Likewise, the real life Maria wasn’t as even-tempered as the character in the film. According to the National Archives, the younger Maria remembered her as having “a terrible temper… from one moment to the next, you didn’t know what hit her. We were not used to this. But we took it like a thunderstorm that would pass, because the next minute she could be very nice.”

Like in the film, Maria and Georg fell in love and got married. But Maria has stated that her love for Georg, who was 25 years her senior, had more to do with his children than with him. She explained that she agreed to marry him because he asked her to be a “second mother” to his children.

“God must have made him word it that way,” she said, “because if he had only asked me to marry him I might not have said yes.” She added: “I really and truly was not in love… I loved the children, so in a way I really married the children… [B]y and by I learned to love him more than I have ever loved before or after.”

Unlike in the film, they married in 1927, about a decade before the Nazis annexed Austria. The von Trapp family also wasn’t as wealthy as they seemed in The Sound of Music, as Georg lost most of his wealth during the global depression in the 1930s. And though his seven children are portrayed in the movie — with different names and often different genders — he and Maria actually had three additional children of their own.

But the film does accurately capture the family’s reaction to the rise of the Nazis.

The Von Trapp Family And The Rise Of Adolf Hitler 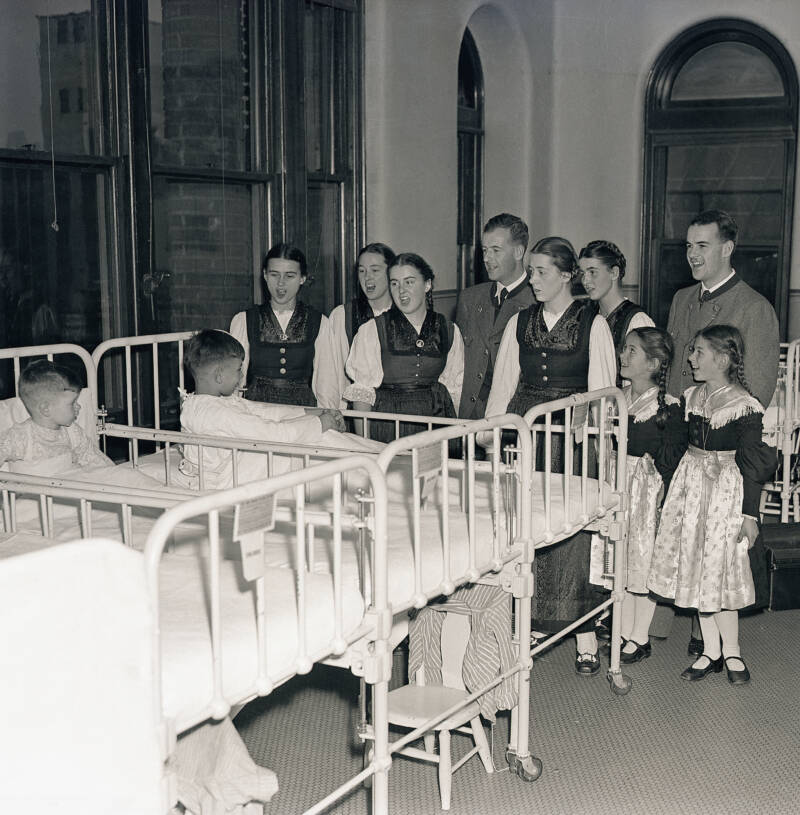 Bettmann/Getty ImagesThe von Trapp family singing at a hospital in 1938.

The von Trapp family learned that Nazi Germany had annexed Austria in March 1938 around the same time that they celebrated one of the children’s birthdays.

By then, the family was a singing sensation. The National Archives report that the von Trapps, also known as the Trapp Family Singers, had become famous for performing all over Europe and had even won first place in the Salzburg Music Festival in 1936 (just as they do in The Sound of Music). But the rise of the Nazis changed everything.

One of the children, Lorli, was disciplined shortly after the German takeover of Austria.

Her teacher told Maria that she had refused to raise her hand in the Heil Hitler salute and refused to sing the German national anthem, announcing to the class that Georg had said “he’d put ground glass in his tea or finish his life on a dung heap before he would ever sing that song.” The teacher threatened to report them if it happened again.

Despite the danger, the family resisted the creeping influence of the Nazis. Georg refused to come out of retirement to command a submarine and the family declined an invitation to sing at Adolf Hitler’s birthday. Georg gathered the children to discuss leaving Austria, noting that they would give up their “material goods” but retain their “faith and honor.” 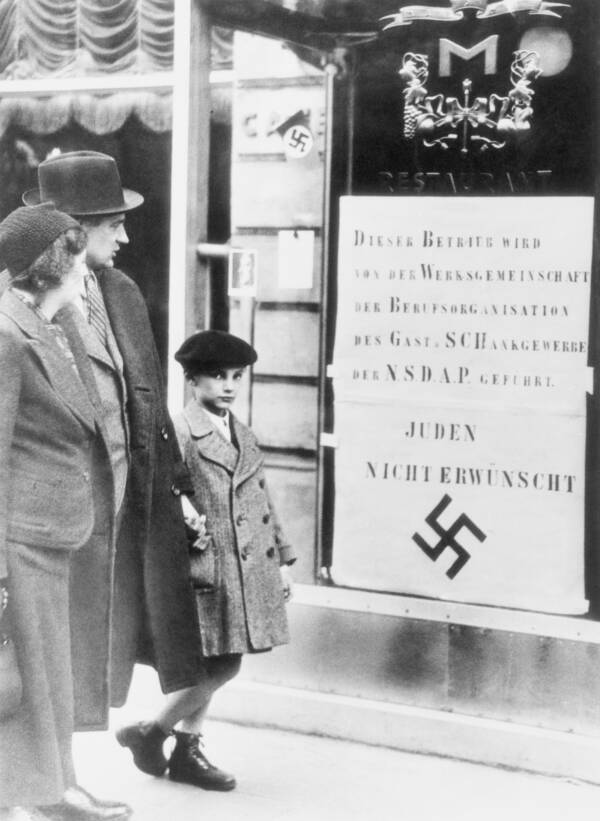 Bettmann/Getty ImagesA street scene in Vienna shortly after the German annexation. The sign in the window reads: “Jews are not wanted.”

“Then, let’s get out of here soon,” Georg allegedly said. “You can’t say no three times to Hitler.”

In The Sound of Music, the family mounts a daring escape, carrying their suitcases and instruments across the Alps. The reality — though they left one day before Austria closed its borders — was much less dramatic.

“We did tell people that we were going to America to sing,” the younger Maria said, according to the National Archives. “And we did not climb over mountains with all our heavy suitcases and instruments. We left by train, pretending nothing.”

Her stepmother put things more succinctly, noting in an interview reported by Biography that crossing the Alps would have led them straight into Nazi Germany. “Don’t they know geography in Hollywood?” she asked in 1967. “Salzburg does not border on Switzerland!”

The family made it safely to the United States, where Maria soon decided to share their story with the world. 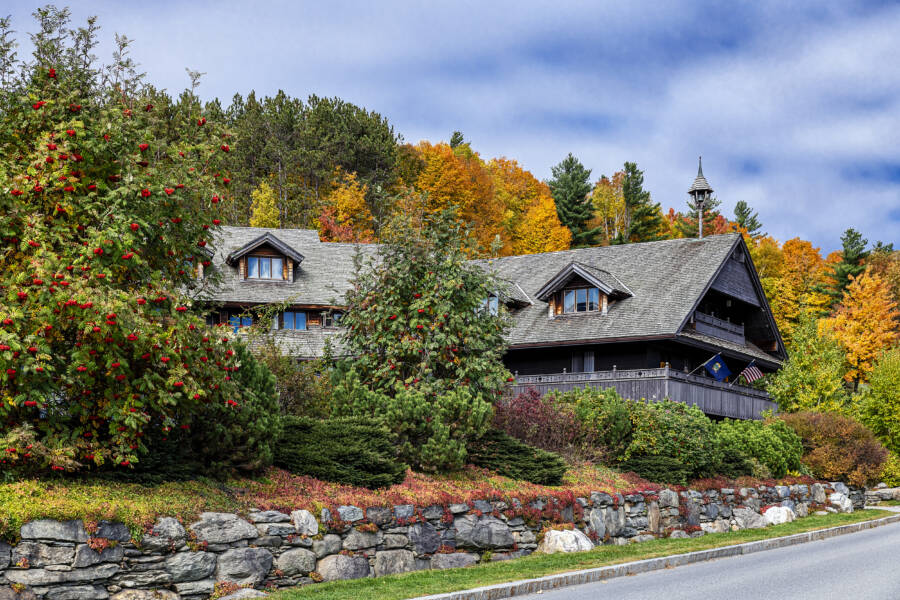 Following their flight from Austria, the von Trapp family continued to tour and eventually settled in Stowe, Vermont, where they ran a music camp and a lodge. Georg died in 1947, and Maria described the family’s experiences in her 1949 book The Story of the Trapp Family Singers.

Maria eventually sold the rights of her book to German producers, who used her story in Die Trapp-Familie (1956), and Die Trapp-Familie in Amerika (1958). Shortly after the German films were released, The Sound of Music premiered as a play, then was adapted as a movie, with Julie Andrews as Maria.

The von Trapp family never made much money from the film and focused most of their attention on running the Trapp Family Lodge in Stowe. Indeed, the family took some issue with the movie’s creative liberties, including the depiction of Georg as a harsh and cold father.

“Sound of Music simplifies everything,” Johannes von Trapp told The New York Times in 1998. “I think perhaps reality is at the same time less glamorous but more interesting than the myth.”

But his stepmother, Maria, came to understand why their story had such an impact. She saw it as a tale of one family following the will of God and conquering a crisis together.

“I always told my children, ‘Find the will of God and do it,’ even in the little things,” she said. “Our life consists of living minute by minute. Someday a big minute will come and you must be prepared.”

After reading about the true story of the von Trapp family, look through these photos of life in Nazi Germany. Or, discover the chilling story of the Nazi’s Hitler Youth.