Inside The War Of The Bucket, The Medieval Italian Battle Sparked By The Theft Of A Wooden Pail

In 1325, the Italian city-states of Bologna and Modena engaged in a short-lived war that allegedly started when Modenese soldiers stole a wooden bucket.

During the Medieval period, what we know today as Italy was not a unified country, and it wouldn’t be fully unified until 1871. Italy was once fragmented into various city-states, duchies, and kingdoms that were all governed independently and had their own traditions, languages, cultures, and politics. Given all these stark differences, it was not unusual for Italy’s provinces to come into conflict with each other — and one of the oddest conflicts of all was the War of the Bucket.

The groundwork for the War of the Oaken Bucket was actually set two centuries before the battle began. 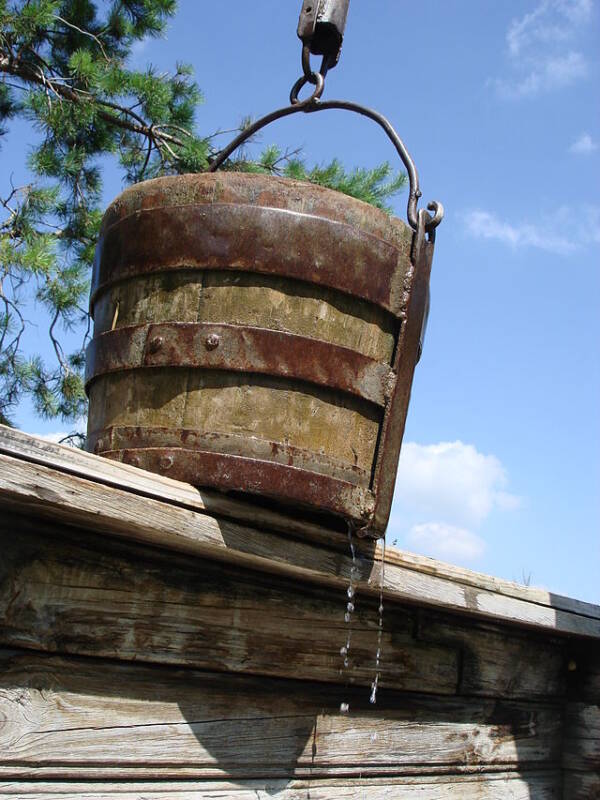 Wikimedia Commons/ZsergheiDid a war between Bologna and Modena really break out over a simple wooden bucket?

At this point in history, the pope was always the one who bestowed spiritual recognition on European Christian rulers. Barbarossa responded to these concerns from the Italians by conquering Milan, Tortona, Pavia, Bologna, and Tuscany.

After talks with Pope Alexander III failed, Barbarossa continued to lay siege to Italy until his defeat at the Battle of Legnano by the pro-papal Lombardy League in 1176. Barbarossa retreated back to Germany, but his parting gift to Italy was a major political rift that would keep the city-states feuding with each other for centuries.

It was this rift that sparked the bizarre War of the Bucket in 1325.

What Started The War Of The Bucket?

Barbarossa’s siege may have been over, but conflict was alive and well in Italy. Two factions emerged from the war: the Ghibellines, who supported the Holy Roman Emperor, and the Guelphs, who favored the pope.

This political division led to resentment and rivalries among Italy’s city-states, which meant that skirmishes and disputes became regular occurrences in the centuries following Barbarossa’s reign. 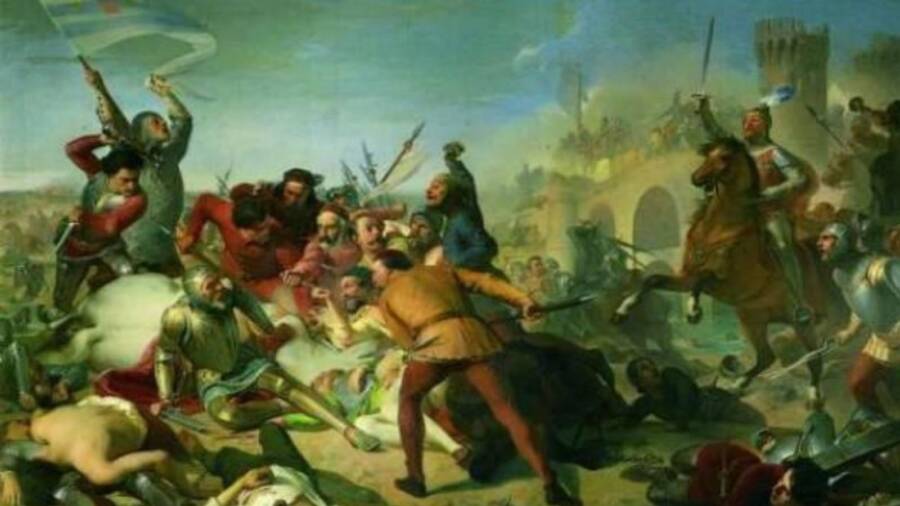 Wikimedia Commons/Palazzo Ducale, Modena/Adeodato MalatestaThe Battle of Cassano in 1259 between the Guelph and Ghibelline armies.

Bologna and Modena were two such bordering city-states that were on opposite sides of the political spectrum. Bologna was more Guelph-dominant (pope-supporting), and Modena was mostly Ghibelline (emperor-supporting).

This caused a significant rivalry between the two that led to many raids over the years. But in 1325, according to HistoryNet, tensions finally boiled over.

The Outbreak Of The War Of The Oaken Bucket

One night in 1325, several Modenese soldiers infiltrated the city walls of Bologna. They spotted a bucket at a public well, seized it, and hightailed it out of the city, delighted with their victory.

Upon discovering the missing bucket, the Bolognese were infuriated and demanded its return. The Modenese were not amenable to this demand and refused. Incensed and humiliated, Bologna declared all-out war on Modena. With that, the War of the Bucket commenced.

Between Bologna and Modena, Modena was considered the underdog. Compared to Bologna, the city-state had significantly fewer resources and soldiers.

Bologna assembled over 32,000 troops and brought in forces from other northern Italian Guelph contingencies for backup. They even managed to get the pope actively on their side. Pope John XXII reportedly declared Modena’s chief magistrate a heretic and stepped up to lead an army of foot soldiers against Modena. 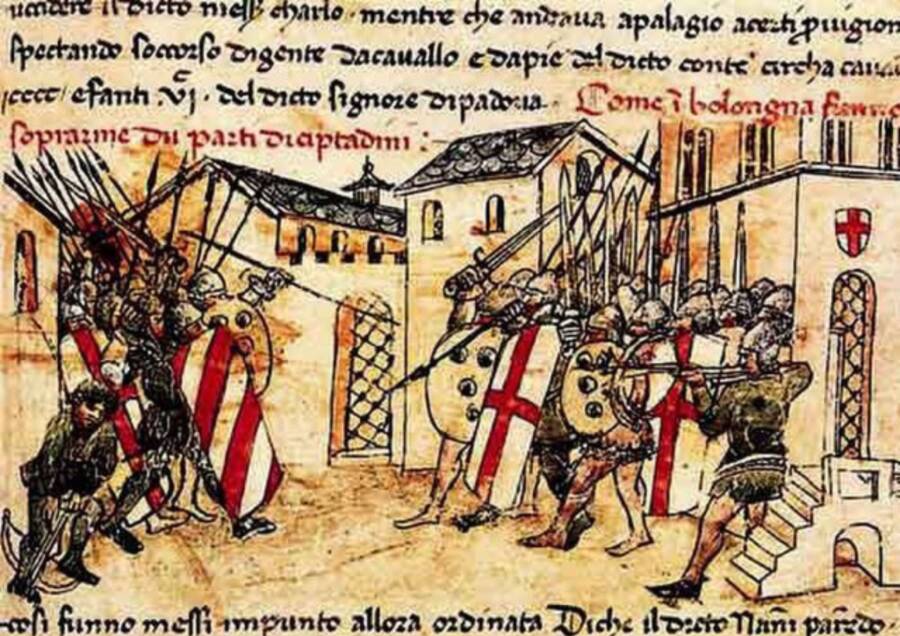 Modena managed to gather only 7,000 soldiers. On the surface, they looked as if they were surely doomed to suffer a miserable defeat at the hands of Bologna’s army and their allies. However, Modena had the distinct advantage of having professionally-trained German soldiers in their army, due to the Modenese’s status as Ghibellines who supported a German Holy Roman Emperor. Bologna’s army was technically bigger, but their troops consisted of a mostly untrained militia.

With their more experienced soldiers, the Modenese confronted the Bolognese outside the town of Zappolino. Due to the chaos and disorganization of Bologna’s troops, Modena soon overwhelmed them, forcing the Bolognese to retreat. Between the two sides, it’s estimated there were approximately 2,000 casualties.

The Bolognese, overwhelmed and humiliated, had no choice but to call off the attack and remain within the safety of their city’s walls. The Modenese continued to taunt the Bolognese by staging a mock decathlon right outside the city — and they reportedly even stole a second bucket for good measure.

The Lasting Aftermath Of The Bizarre War

Of course, the War of the Bucket was about much more than an actual bucket. In fact, some historians say the pail itself wasn’t actually stolen until Modena had already defeated Bologna in battle. Centuries of discord led up to the conflict, and the bucket — if it did truly exist — was simply the straw that broke the camel’s back.

The war eventually fizzled out, and in January of 1326, an armistice was signed by the two rivals that temporarily settled matters. Conflict, however, would continue between the Guelphs and the Ghibellines for another two centuries until Italy was invaded by Charles I of Spain in 1529. 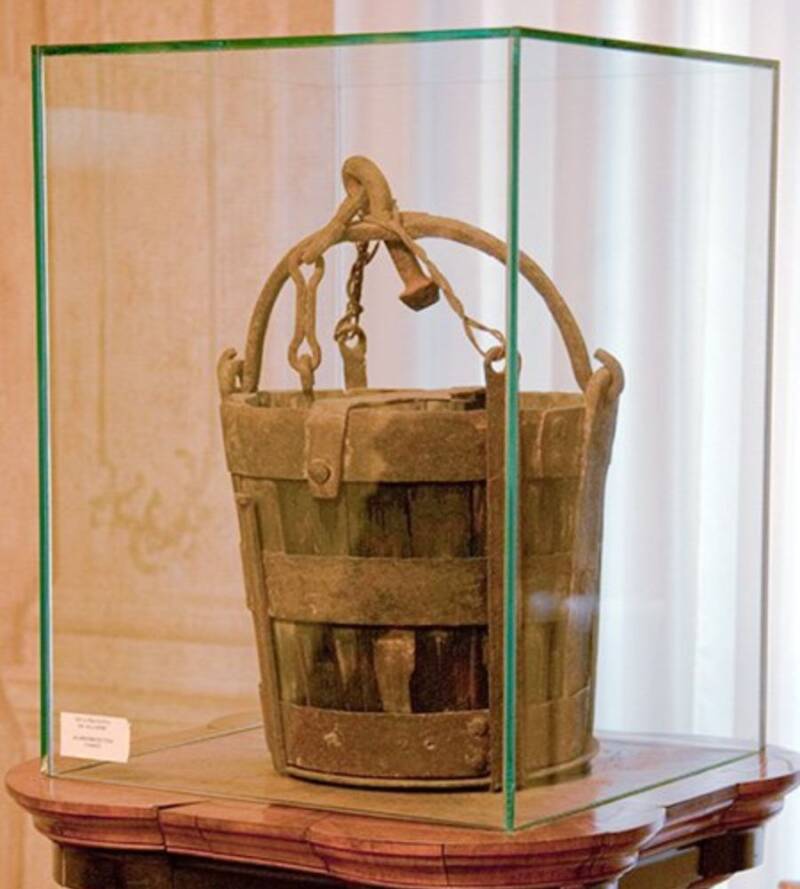 TwitterThis is reportedly the very bucket that Modenese soldiers swiped from a well in Bologna in 1325.

While Modena and Bologna grudgingly called a ceasefire, Bologna never had their bucket returned. The Modenese proudly displayed the bucket up in the bell tower of their cathedral, the Torre della Ghirlandina — just to continue to rub Bologna’s face in its defeat. Modena still has the bucket to this day. A replica now hangs in the bell tower, but what’s said to be the original bucket is on display in the Palazzo Comunale.

And even now, 700 years later, the bucket is still a source of playful dispute between the two cities.

After learning about the War of the Bucket, read about the shocking poison that 17th-century Italian wives used to kill off their unwanted husbands. Then, check out photos of life in Mussolini’s fascist Italy.

Laura Kelly Wells
Laura's work has been featured on Inverse, Grunge, and The Mary Sue, covering topics including history, film, TV, entertainment, and culture.
You might also like
×
Follow hu On