The Shocking History Of Aqua Tofana, The 17th-Century ‘Blemish Serum’ That Killed Hundreds Of Unwanted Husbands

In the 1600s, many Italian housewives had no hope of escaping bad marriages. So hundreds of them turned to poison to kill their husbands — and collect their inheritance. 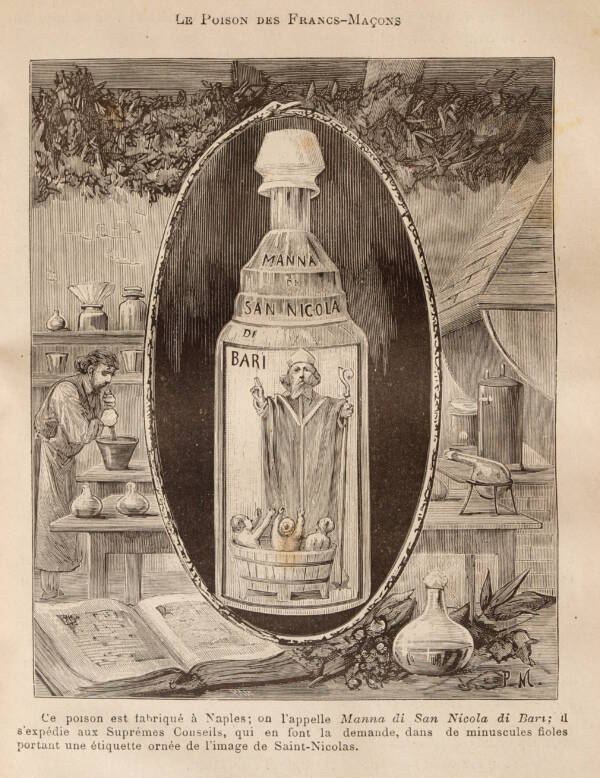 Public DomainAqua Tofana was often disguised as “Manna of St Nicholas of Bari,” an ointment for blemishes.

The deadly poison Aqua Tofana came in a pretty bottle. It was colorless, odorless, and tasteless. And for almost 20 years in 17th-century Italy, hundreds of women used it to stealthily kill their husbands.

Their motivations may have differed, but the results were the same. The poison worked quickly and quietly and killed without leaving a trace. By the 1650s, it’s estimated that Aqua Tofana killed some 600 people.

But the truth about this elusive poison can be hard to pin down.

What Was Aqua Tofana?

For women living in 17th-century Italy, marriage could be a cage. They had few options aside from finding a husband, and once they had one, it was impossible to leave.

But a woman named Guilia Tofana had a solution.

Born in Palermo, Italy, around 1620, Tofana knew a thing or two about death. When she was just 13, a woman named Thofania d’Amado — likely her mother — was executed for killing what some sources have claimed was her own husband with poison.

In the aftermath, Tofana carried on her mother’s legacy using her old recipe. She began selling Aqua Tofana, an odorless poison that she disguised as an ointment. Though the exact concoction has since been lost, Tofana likely made her poison with arsenic, lead, and belladonna.

Tofana established quite the business in Rome, where she hired associates to operate a covert apothecary to quietly sell their deadly potion among actual cosmetic products.

Soon, men began dying by the dozens as a result of women desperate to leave their unhappy marriages or collect the inheritance money and begin anew. 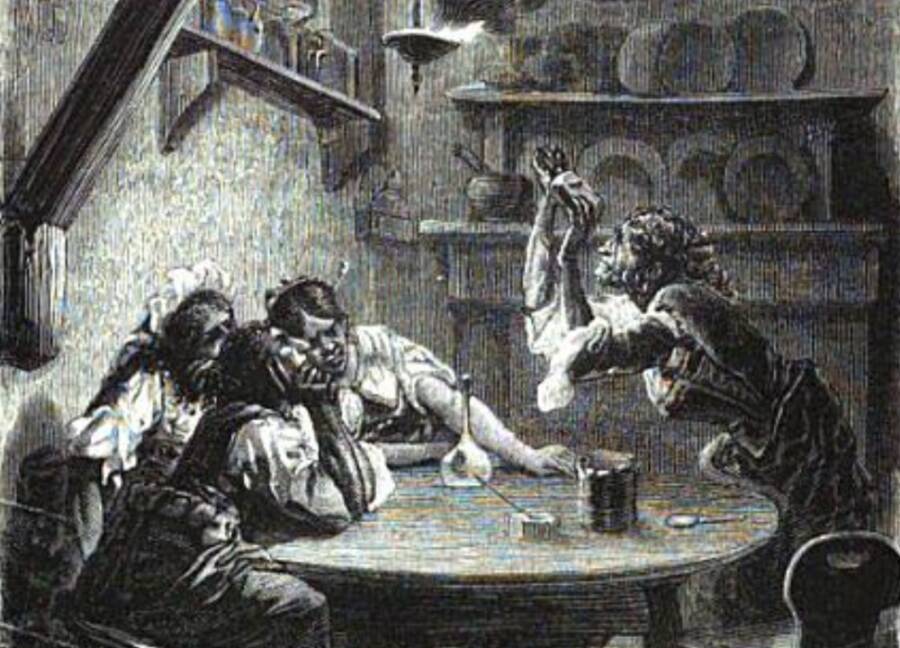 Public DomainA 19th-century depiction of the poison ring that helped some women in Italy to kill their husbands.

For women who wanted to kill their husbands, Aqua Tofana was the perfect murder weapon. It came in a simple bottle that they could hide among their toiletries. And it was odorless and tasteless, which meant they could slip it into their husband’s food and drink without him noticing.

What’s more, the effects of Aqua Tofana mirrored an actual illness. The first dose caused symptoms similar to a cold. The second triggered stomach aches, vomiting, and diarrhea. And the third or fourth dose dragged the victim to death’s door.

For almost two decades, Guilia Tofana quietly sold her poison until one of her customers brought her downfall.

As the story goes, one of Tofana’s clients decided to use Aqua Tofana to kill her husband. She put a few drops in his soup and brought it to their table. But when he brought the bowl to his lips, she had a change of heart.

Begging him not to drink the soup, the wife eventually — perhaps after being beaten — admitted that she’d poisoned it. She then told her husband where she’d purchased it.

Another version, however, suggests that women had started confessing murder to their priests. At the same time, people had started to notice that “young widows were unusually abundant.”

Tofana was then possibly arrested, tortured, and put on trial after she admitted that her poison had killed some 600 people. She and her associates were executed, as were a number of her lower-class clients. Some of her more prominent clients were spared at the request of the Pope, however.

According to one historian, though, Giulia Tofana might not have met such a gruesome fate after all.

The Legacy Of Aqua Tofana

Though a poison-ring trial in Rome did happen in 1658, it’s possible that Giulia Tofana missed it entirely. Historian Mike Dash of the University of Cambridge has suggested that Tofana died, probably peacefully, and possibly in 1651. He believes her associates and clients stood trial without her.

Regardless, Aqua Tofana took on the specter of legend in the years that followed. As Dash writes, the poison became a sort of “catch-all” phrase “to describe a supposed class of subtle, precise, slow-acting poisons that were believed to be undetectable and invariably fatal.”

Indeed, the legend of Aqua Tofana and the murderous wives of Rome grew with time. The basic facts of the story — hundreds of husbands dead, poison sold by a woman — spread through 17th-century Europe.

Even the composer Wolfgang Amadeus Mozart worried that he’d been poisoned with Aqua Tofana when he started suffering an unexplained illness in 1791 at the age of 35.

“I am sure that I have been poisoned,” Mozart wrote. “I cannot rid myself of this idea … Someone has given me Aqua Tofana and calculated the precise time of my death.”

Mozart did indeed die — mysteriously — though there’s no proof that this infamous poison is what did it.

In the end, the story of Aqua Tofana is as slippery as the poison itself. The basic facts of Aqua Tofana are obscured by history, just as it once helped wives to obscure the truth of their husbands’ demise.

After reading about Aqua Tofana and its maker Giulia Tofana, learn about the “Angel Makers” of Nagrev who poisoned their husbands and children. Or, discover the chilling story of Stacey Castor who poisoned her husbands with antifreeze.