If Giulia Tofana's confessions are to be believed, then the lethal potion maker is among the most prolific serial killers in history.

Giulia Tofana was a 17th-century professional poisoner who sold her signature concoction to wives that wanted to kill their husbands.

Once she was caught, Tofana guessed that she was responsible for having provided the poison in 600 deaths which, in a way, made her one of the most prolific assassins in history. She even purportedly managed to synthesize her own tasteless and untraceable poison that she packaged covertly in a makeup bottle.

Her secret reign of terror lasted nearly 20 years by some estimates and ended when she was turned in by a guilty party. 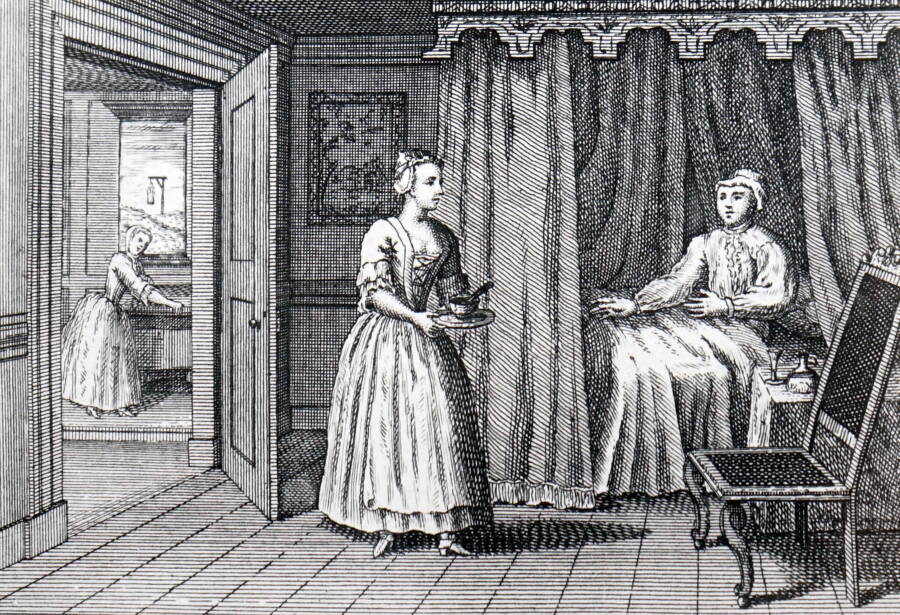 Universal History Archive/Universal Images Group via Getty ImagesThis 18th-century illustration depicts a young wife murdering her old husband with poison so that she may marry her younger lover.

In many ways, Giulia Tofana’s sinister business was simply a product of the times.

In 17th-century Italy, women were auctioned off like objects to loveless and often abusive marriages. These women had no financial or social power and really only had three options at their disposal: to get married, to stay single and rely on sex work to survive, or to become a respected and well-off widow (which itself required option one).

For many women, the third option was the most attractive. Luckily for them, 17th-century Rome had a flourishing “criminal magical underworld” that provided the services to make this possible.

This underground community was found in other large European cities and was made up of alchemists, apothecaries, and experts in “black magic.” In reality, these experts didn’t so much as dabble in the dark arts as they did solve problems that doctors or priests of the time could or would not, like provide abortions.

Even in Versailles, between 1677 and 1682, King Louis XIV faced a series of murders by poisoning at his court in a scandal called the Affair of the Poisons. The Affair would end with the expulsion of his powerful royal social companion, named Madame de Montespan, and the execution of a powerful potion maker named Madame Monvoisin.

This would follow on the heels of Tofana’s own macabre demise.

While not much is known about Giulia Tofana’s background, it is believed that she was born around 1620 in Palermo, Sicily, to Thofania d’Amado. D’Amado had her own dark history and, in 1633, was executed for the murder of her husband.

Her alleged weapon of choice? Poison.

Giulia Tofana also became a widow and moved with her daughter, Girolama Spara, to Naples and then Rome. Following in her mother’s footsteps, and maybe even using her recipe, Tofana allegedly began selling a lethal concoction of her own.

With the help of her daughter and a group of reliable women, Tofana gained a reputation as a friend to troubled women. Her group of poisoners may have also recruited a local Roman priest, Father Girolamo, to secretly take part in their criminal network, but again, information is spotty on Tofana’s actual business.

It is generally believed that Girolamo supplied the arsenic for the poison and Tofana and her colleagues disguised it as a cosmetic for their customers. If anyone were to ask about Tofana’s booming business, all she had to do was show them her bottles of “Aqua Tofana,” a covetable face cream or oil for women — looking to be single again. 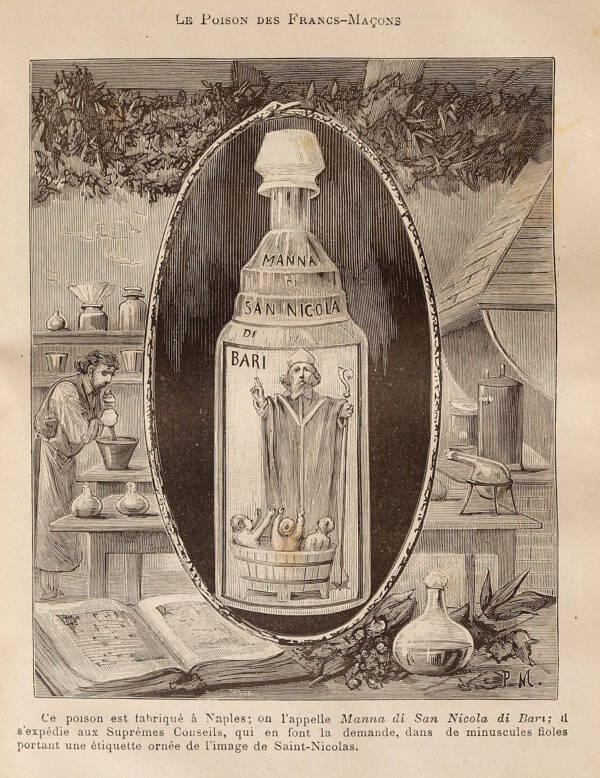 Pierre Méjanel and François Pannemaker/Wikimedia CommonsGiulia Tofana disguised her poison as a cosmetic by packaging it in a small glass bottle with an image of Saint Nicholas on the front.

Guilia Tofana packaged her poison so that it could easily blend in on a woman’s vanity beside her makeup, lotions, and perfumes. Although it was known to her customers as Aqua Tofana, the glass bottle itself was labeled “Manna of St Nicholas of Bari,” which was actually a popular healing oil at the time for blemishes.

Despite its subtlety, Aqua Tofana was powerfully lethal. The colorless and tasteless concoction could kill a man with just four to six drops. But the real genius behind the poison was how undetectable it was even after death. It would kill a victim over days, mimicking a disease.

Administered through some kind of liquid, the first doses induced weakness and exhaustion. The second dose caused symptoms such as stomach aches, extreme thirst, vomiting, and dysentery. The gradual decline, however, would give the victim the chance to get his affairs in order, which usually meant ensuring that his soon-to-be-widow would be well taken care of after his death.

Finally, with a third or fourth dose administered over the next several days, the man would meet his fate. 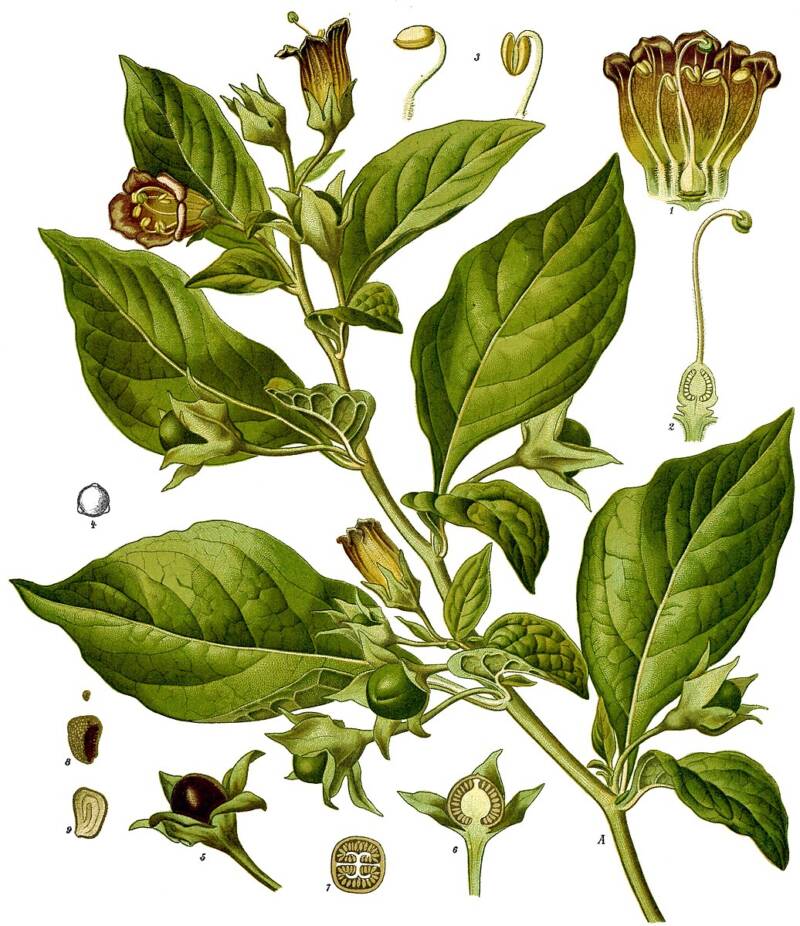 Franz Eugen Köhler/Wikimedia CommonsBelladonna, an alleged ingredient in Aqua Tofana that was also used in other cosmetics of the time.

As Chambers’s Journal wrote in 1890 of the poison:

“To save her fair fame, the wife would demand a post-mortem examination. Result, nothing — except that the woman was able to pose as a slandered innocent, and then it would be remembered that her husband died without either pain, inflammation, fever, or spasms. If, after this, the woman within a year or two formed a new connection, nobody could blame her.”

According to most accounts, Tofana’s business successfully fooled the authorities for decades throughout 17th-century Italy. Tofana may even have gone undiscovered forever had it not been for a bowl of soup.

The Discovery, Execution, and Lasting Legacy of Giulia Tofana 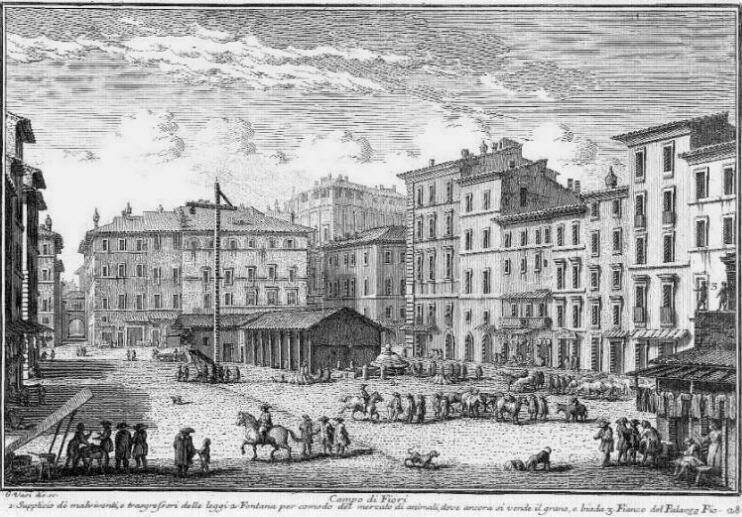 Giovanni Vasi/Wikimedia CommonsCampo de’ Fiori in Rome where Giulia Tofana, her daughter, and three of her helpers, were executed.

As the story goes, in 1650, a woman served her husband a bowl of soup laced with a drop of Aqua Tofana. Before her husband could take a spoonful, however, the woman had a change of heart and begged him not to eat it.

This raised the man’s suspicions and he abused his wife until she confessed to poisoning the food. He immediately turned the woman in and upon more torture by authorities, she admitted that she had purchased Aqua Tofana from Giulia Tofana.

With the authorities searching for her, Tofana escaped to a local church where she was granted sanctuary. That is until a rumor was spread that she had used her Aqua Tofana to poison the local water supply. The church was quickly stormed and Tofana was arrested.

After brutal torture, Giulia Tofana confessed to killing as many as 600 men with the use and sale of her poison between the years of 1633 and 1651 alone, making her the mastermind behind one of the most notorious murder plots in history.

Then, as the legend concludes, Tofana was executed in Campo de’ Fiori in Rome in 1659 alongside her daughter and three of her helpers. Additionally, over 40 of Tofana’s lower-class customers were also executed while women of the upper class were either imprisoned or escaped punishment altogether by insisting that they never knew their “cosmetics” were actually poison.

Some accounts, however, assert that Tofana’s reign of terror lasted far longer than this and that she was captured, tortured, and executed in 1709.

Some also believe that her concoction was even involved in the death of a legend when, over a century later, famous composer Wolfgang Amadeus Mozart fell ill at the age of 35. As his health deteriorated, he allegedly said:

“I feel definitely that I will not last much longer; I am sure that I have been poisoned. I cannot rid myself of this idea… Someone has given me acqua tofana and calculated the precise time of my death.”

While it is still not known what exactly led to Mozart’s untimely demise, some believed it was perhaps because of Aqua Tofana. However, it is largely believed that he did not die of poisoning, let alone from Tofana’s mixture.

This would be hard to corroborate anyway, as Giulia Tofana’s exact recipe was never recorded. It is believed that she used a mixture of arsenic, lead, and belladonna, which was commonly used in cosmetics throughout the 17th century.

Because of this, belladonna has become synonymous with the term “beautiful woman,” though it’s more accurate nickname is “deadly nightshade,” a fitting moniker for the tools of a femme fatale.

Now that you’ve learned about notorious serial poisoner Giulia Tofana, read about Graham Young, the so-called Teacup Poisoner who also used belladonna to his advantage. Then, check out 23 of history’s most ruthless female serial killers, from Karla Homolka to Mary Bell.