A Comprehensive History Of The “War On Christmas”

Turns out the "War on Christmas" has been going on for centuries. 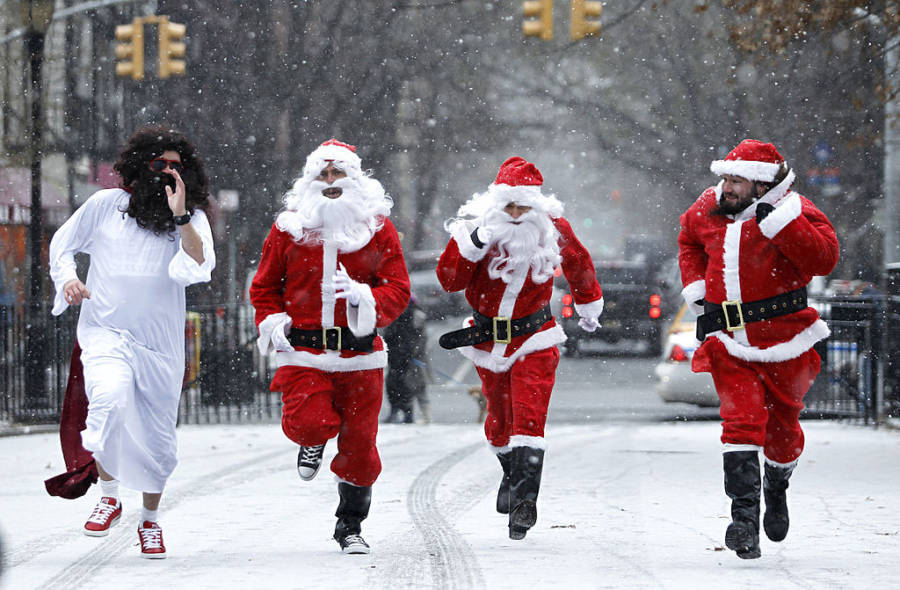 Kena Betancur/Getty ImagesPeople dressed as Jesus and Santa run through the streets of New York during the annual Santacon bar crawl.

Though the War in Afghanistan is the longest in our country’s history, there’s one American “battle” that’s been even more drawn-out. And it’s happening right here at home.

And while many associate this tiresome debate with Starbucks, Bill O’Reilly, and cashiers wishing them politically correct “Happy Holidays,” the crusade’s roots actually stretch back much further.

With a cast including angry Puritans, cross dressers, and Henry Ford, here’s a timeline to help you learn about the war not taught in school:

According to Saint Augustine, people have been doing Christmas wrong for more than 1,500 years! Around 400 A.D., the saint said as much when he begged early Christians to give alms instead of holiday presents.

Christmas has actually been under siege in what is now the U.S. since the first permanent European settlers arrived in the 17th century. When boys of Plymouth attempted to celebrate the nativity with a friendly game of baseball, Governor William Bradford broke up the game and insisted they get back to work. Puritans at the time related idleness to indulgence, which they viewed as heretical.

A few years later, in 1659, the Massachusetts Bay Colony outlawed Christmas celebrations and feasts. Anyone caught having too good a time was fined five shillings.

Puritans were so riled up about the holiday that they tried to rid the world of Christmas in the 19th century.

Arguing that the Bible never specifically mentions December 25th, they saw no religious justification for a holiday that — even way back then — people used as an excuse to get drunk.

In addition to the binge-eating, binge-drinking, and flashy parading that still de-spiritualize the Christmas of today, festivities in the 1800s also included brawling, vandalizing, burglarizing, and men dressing up like women.

According to Steven Nissenbaum’s book, “The Battle for Christmas: A Social and Cultural History of Our Most Cherished Holiday,” the Puritans rebranded the day, “Foolstide.”

Henry Ford — car-maker and anti-Semite — said that Jewish people spearheaded the so-called War on Christmas. In his four-volume manifesto against American Jews, he wrote that “the whole record of the Jewish opposition to Christmas…shows the venom and directness of [their] attack.”

Though it’s no longer OK to be blatantly anti-Jewish, the new connection Ford drew between anti-Christmas sentiment and anti-American sentiment managed to stick.

Hitler and Stalin both tried their darndest to put a stop to Jesus-birthday-joy.

According to William Crump’s “Christmas Encyclopedia,” the Soviet dictator — in accordance with the government’s state atheism — replaced Christmas with “national family day,” insisting that children receive their gifts on New Year’s Day from Grandfather Frost.

In Germany, children were taught a new rendition of Silent Night:

Silent night, Holy night,
All is calm, all is bright.
Adolf Hitler is Germany’s star
Showing us greatness and glory afar
Bringing us Germans the might. 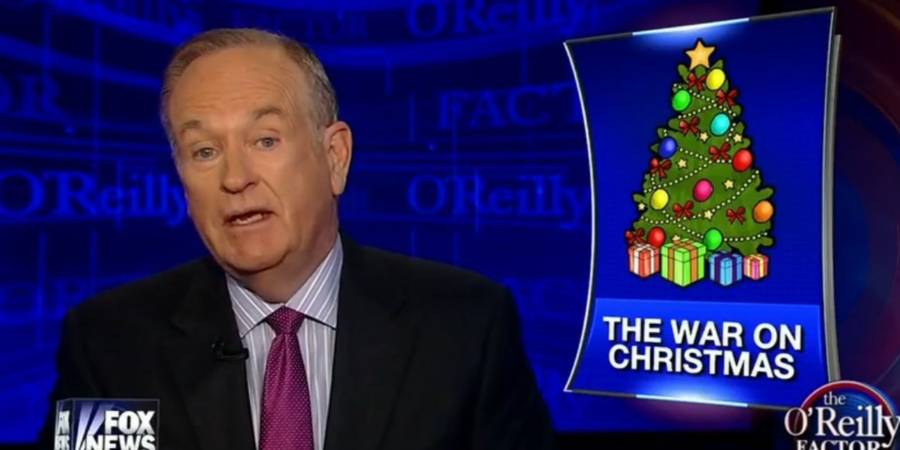 The 1990s were the first decade in which Americans became convinced of the idea that “political correctness” was impeding their First Amendment Rights.

“The notion of political correctness has ignited controversy across the land. And although the movement arises from the laudable desire to sweep away the debris of racism and sexism and hatred, it replaces old prejudice with new ones,” President George H.W. Bush said in 1991.

Seizing on this fervent fear, writer Peter Brimelow began to decry the modern siege on Santa. On his website, VDARE, Brimelow pointed to new war mongers, including the Department of Housing and Urban Development — which had the audacity to name a party, “A Celebration of Holiday Traditions” — and Amazon.com — which wished customers a “Happy Holidays!”

Brimelow’s website — which calls itself the “voice of the Historic American Nation” — has since been classified as a hate group.

And while the impassioned ramblings of that old white man were not enough to get people riled up, John Gibson’s 2005 book, The War on Christmas: How the Liberal Plot to Ban the Sacred Christian Holiday Is Worse Than You Thought, seemed to do the trick.

He put schools on blast for calling vacation “Winter Break” and asked the Post Office to stop plotting against him with their secular snowman stamps.

Over the centuries, a constellation of actors have attempted to “sabotage” Christmas in one way or another: people who are not Christian enough, people who are too Christian, Jews, Nazis, and, of course, latte-loving liberals.

Today, prominent Republican voices keep the fight to save the holiday going. “If I become president, we’re gonna be saying ‘Merry Christmas’ at every store,” President-elect Donald Trump said while campaigning in Iowa last year. “You can leave ‘Happy Holidays’ at the corner.”

And with that, apparently, the war is over. 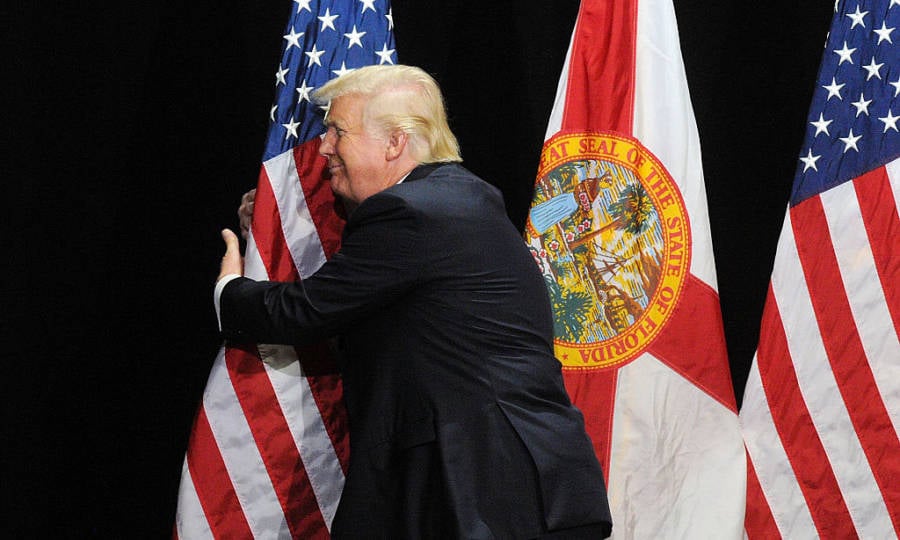 Gerardo Mora/Getty ImagesDonald Trump – a firm believer in the War on Christmas – embraces the American flag.

For more Christmas history, check out the surprising origins of the Christmas tree and these strange, old Christmas ads that will make you happy it’s 2016.