Discover why the contests for Miss Fabulous Frankfurter and Miss National Catfish Queen are even stranger than they sound. 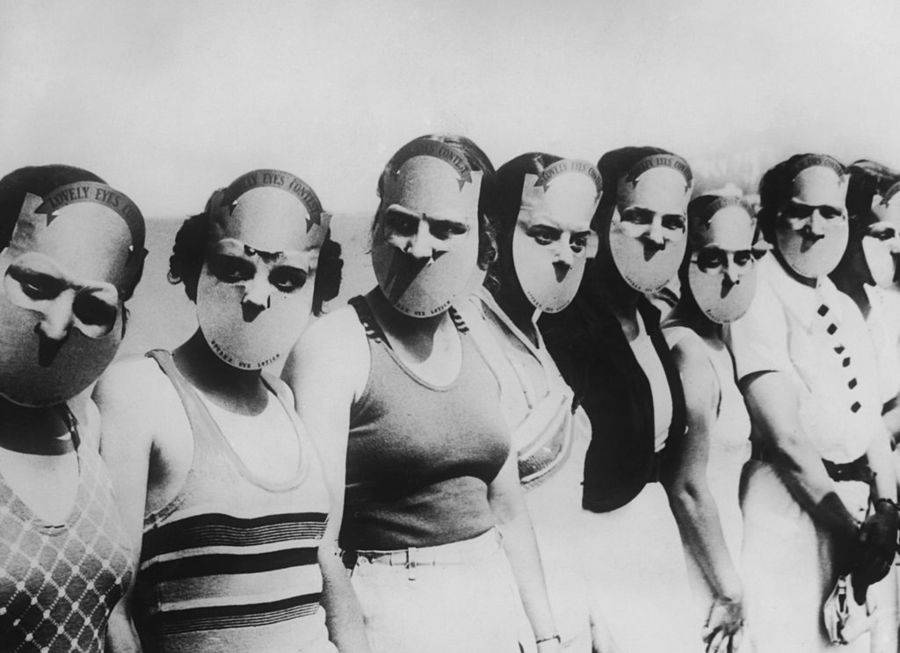 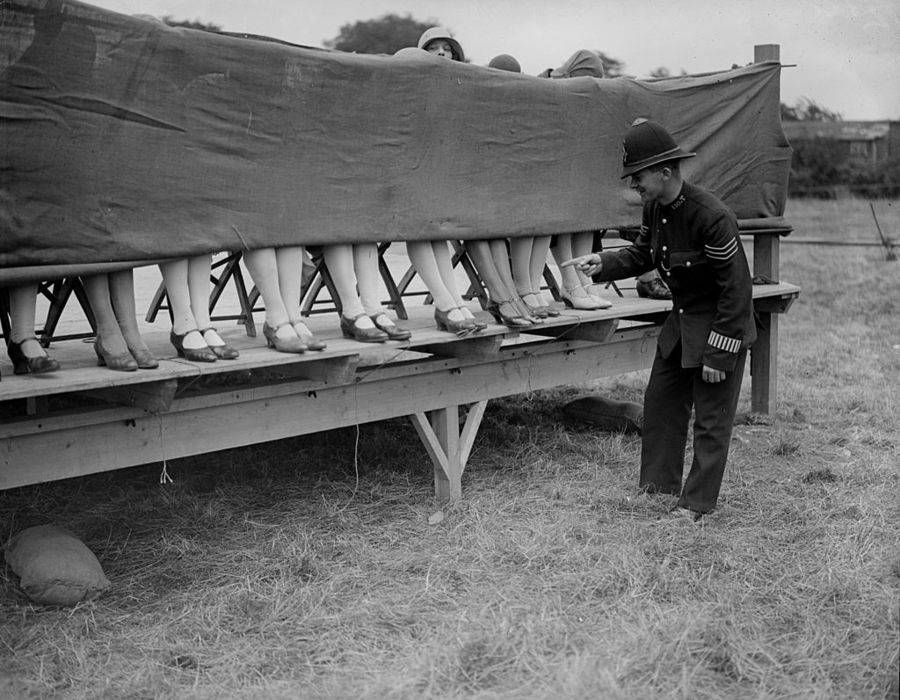 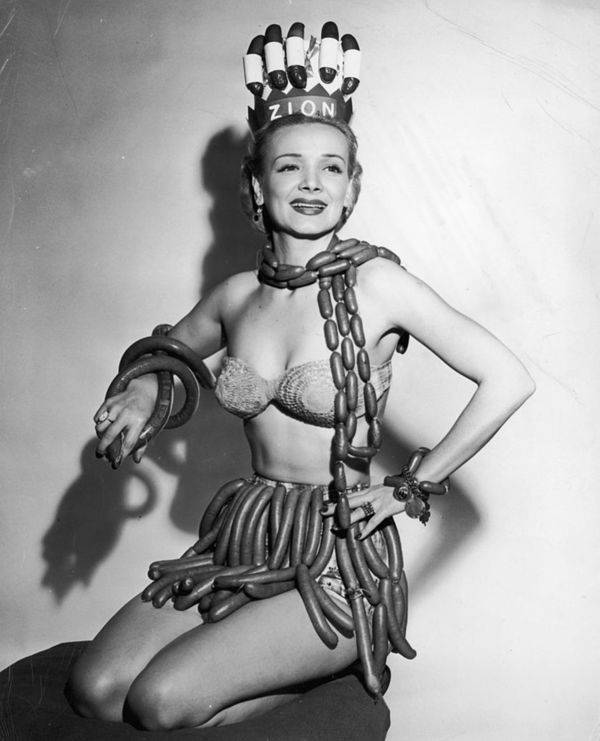 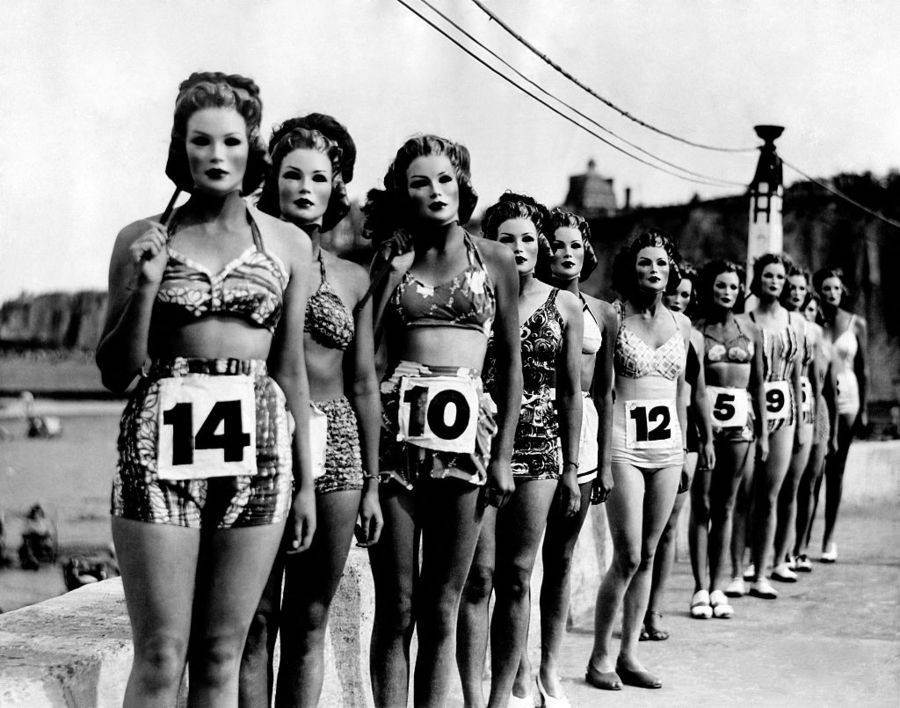 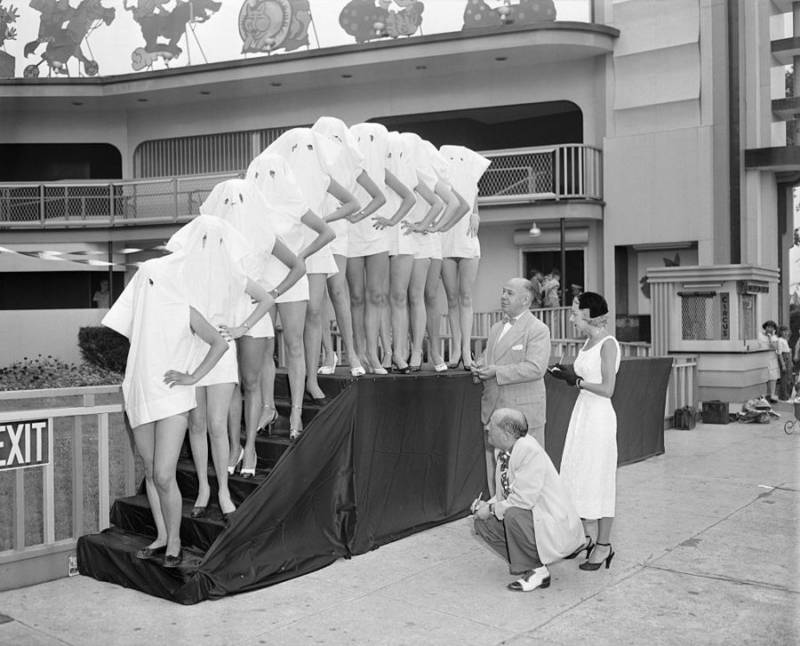 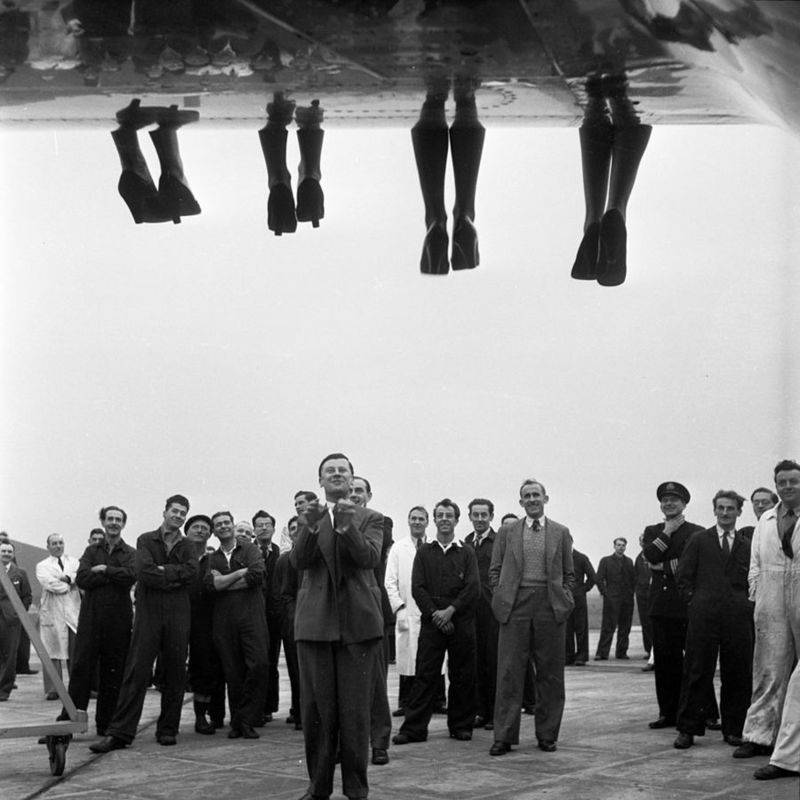 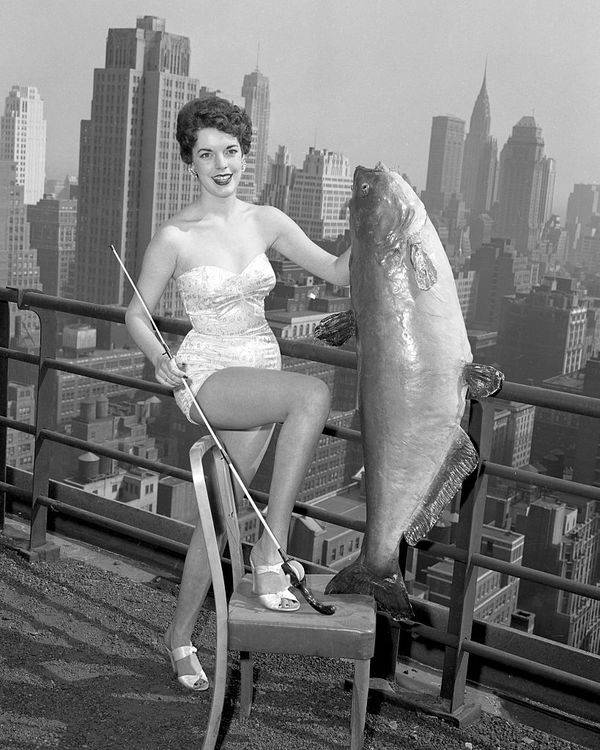 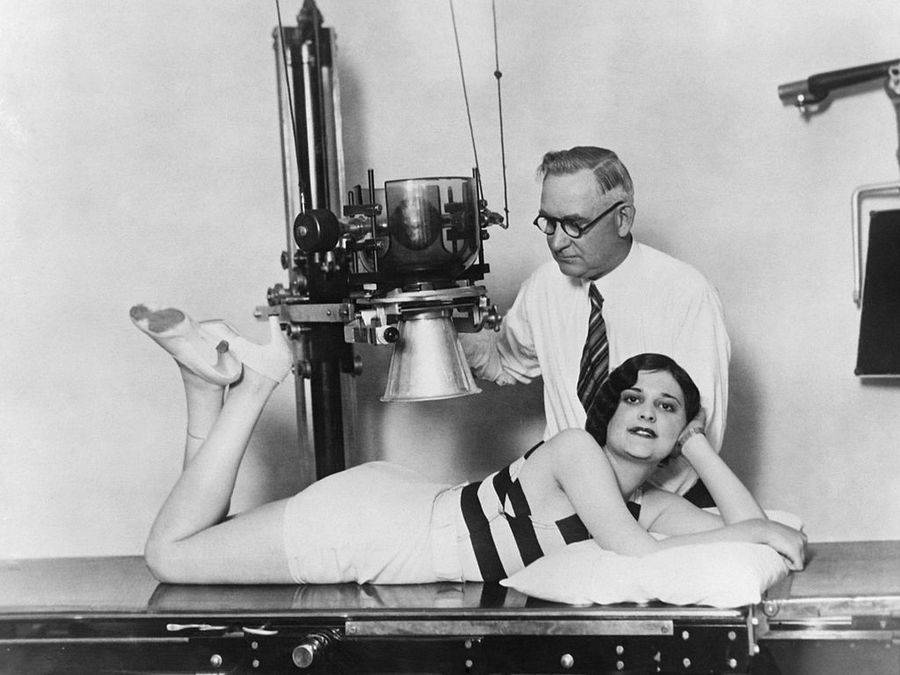 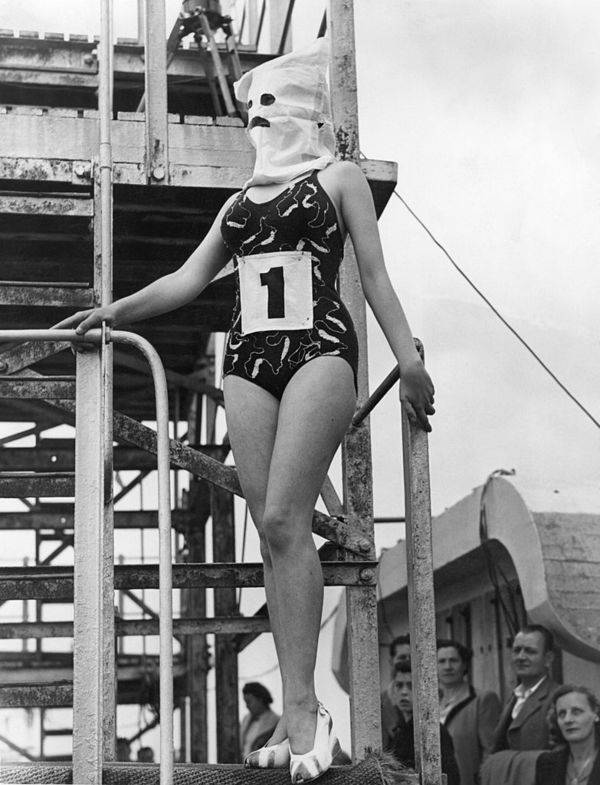 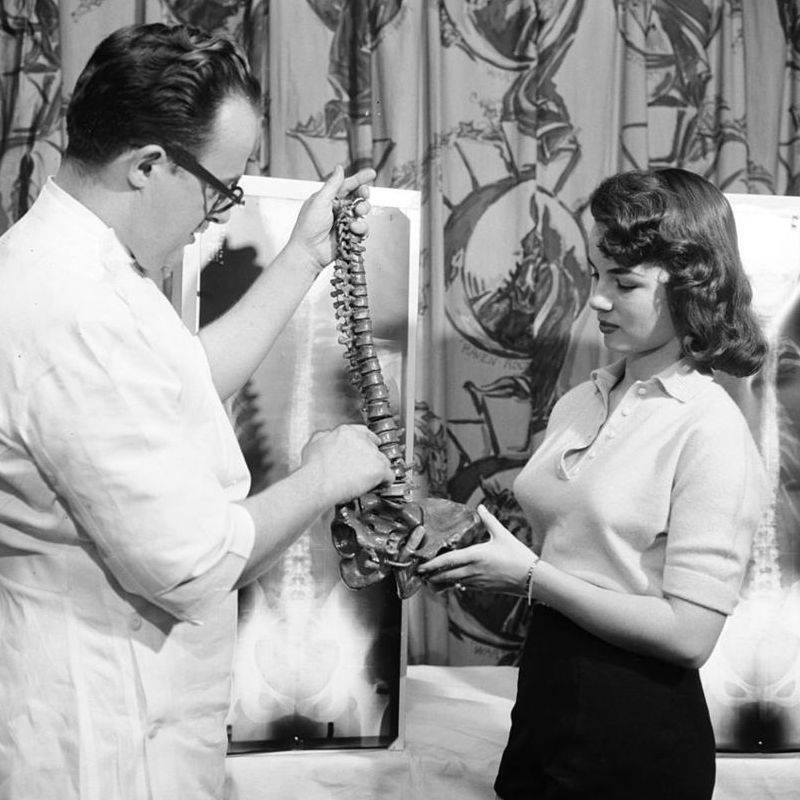 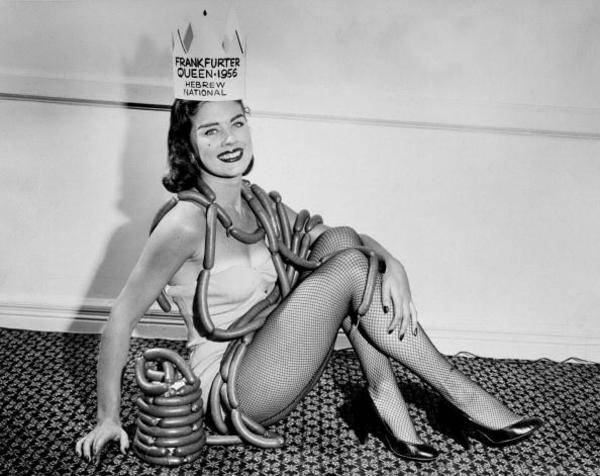 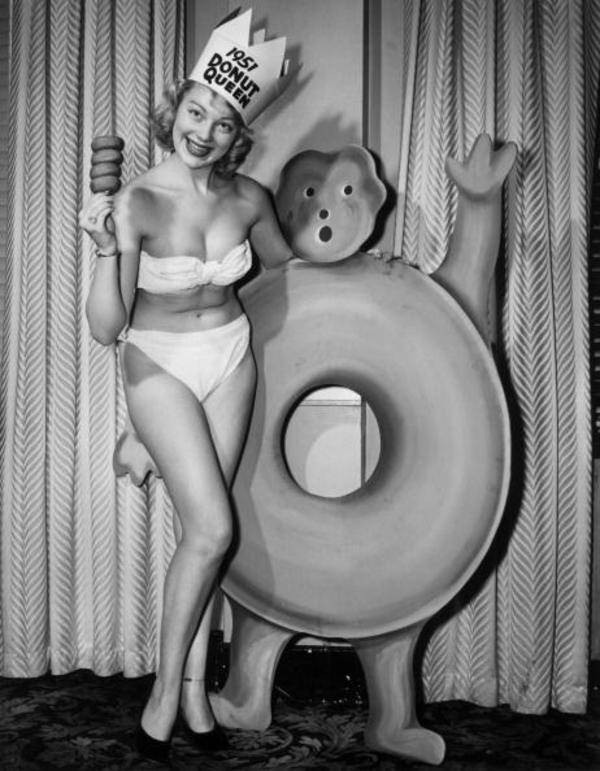 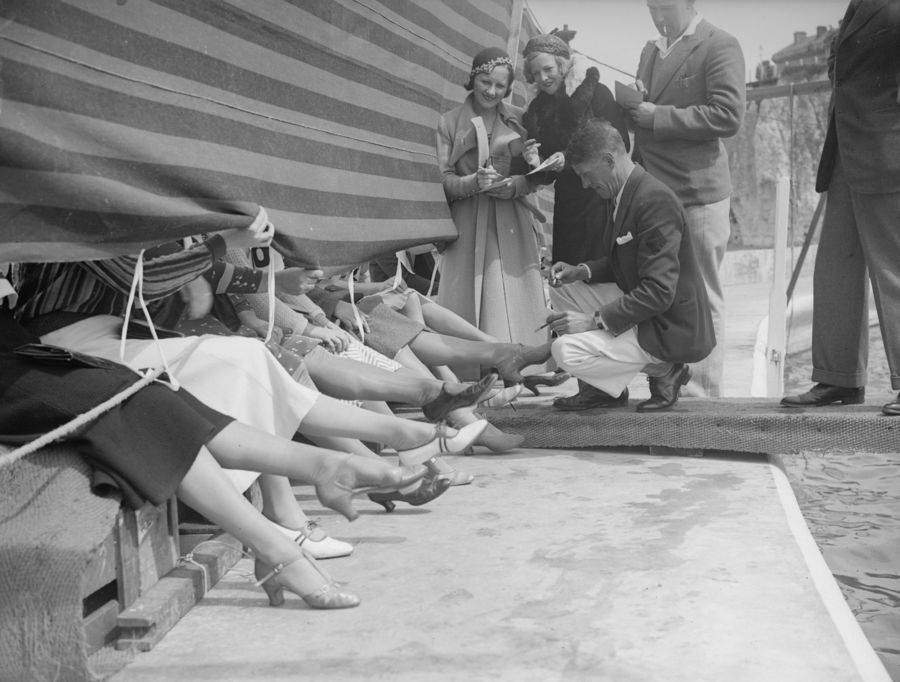 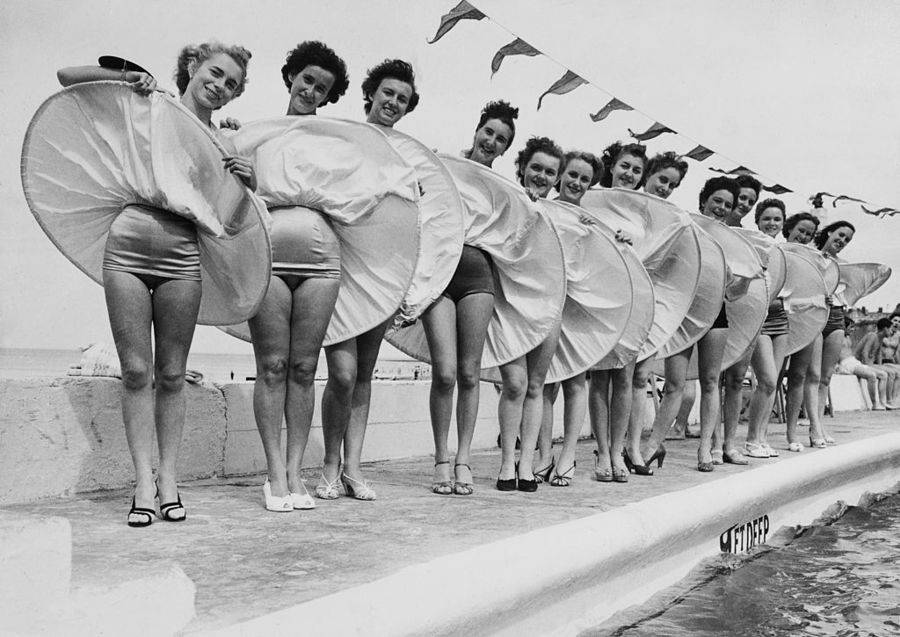 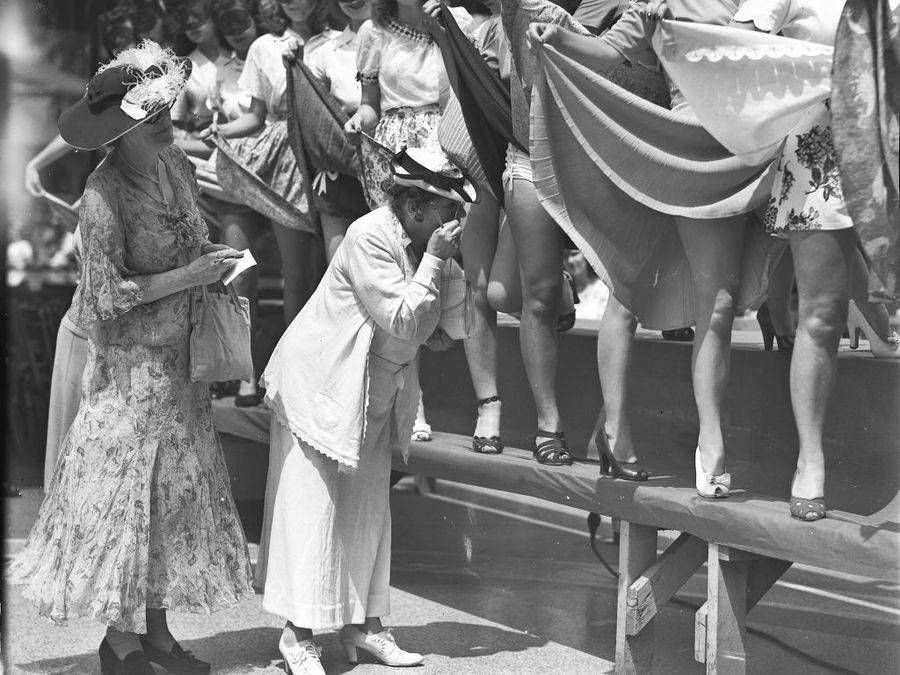 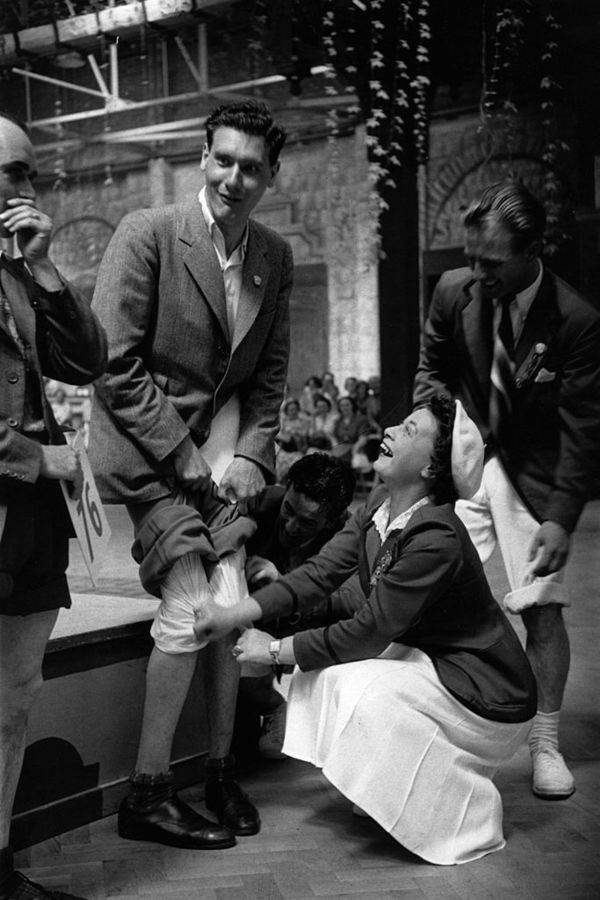 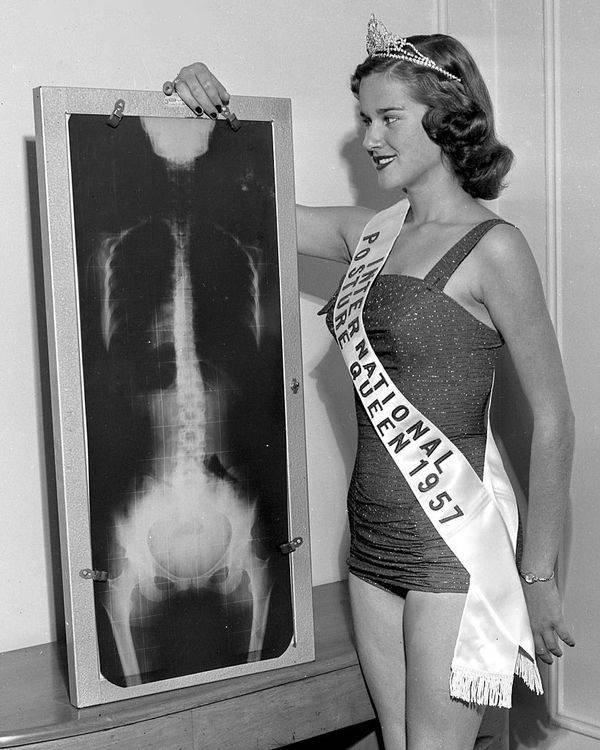 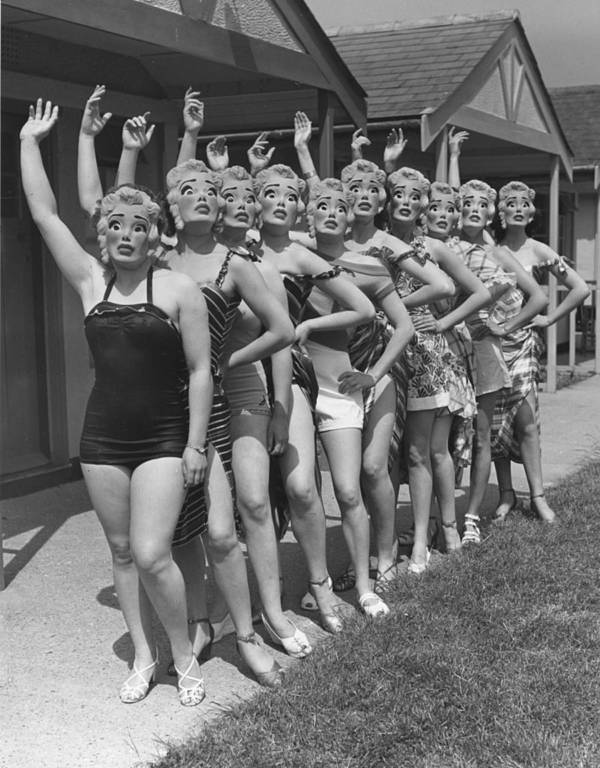 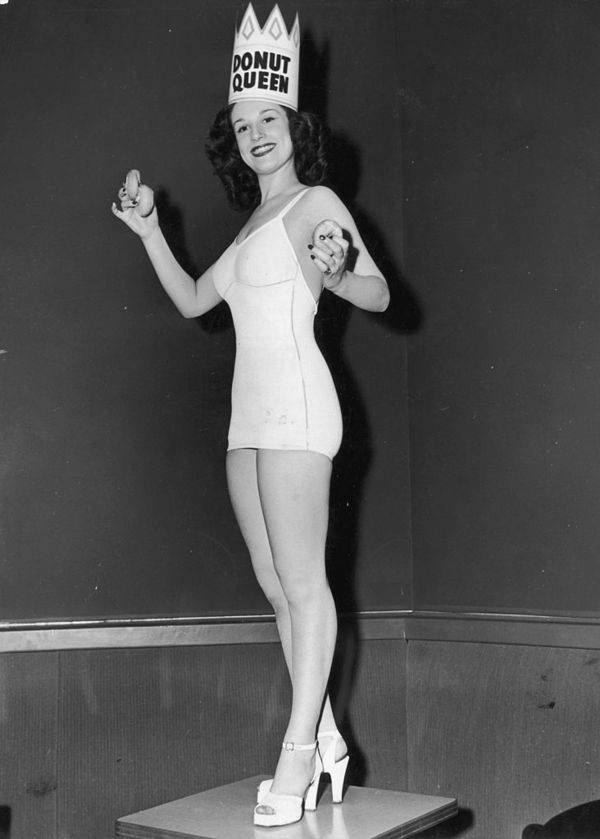 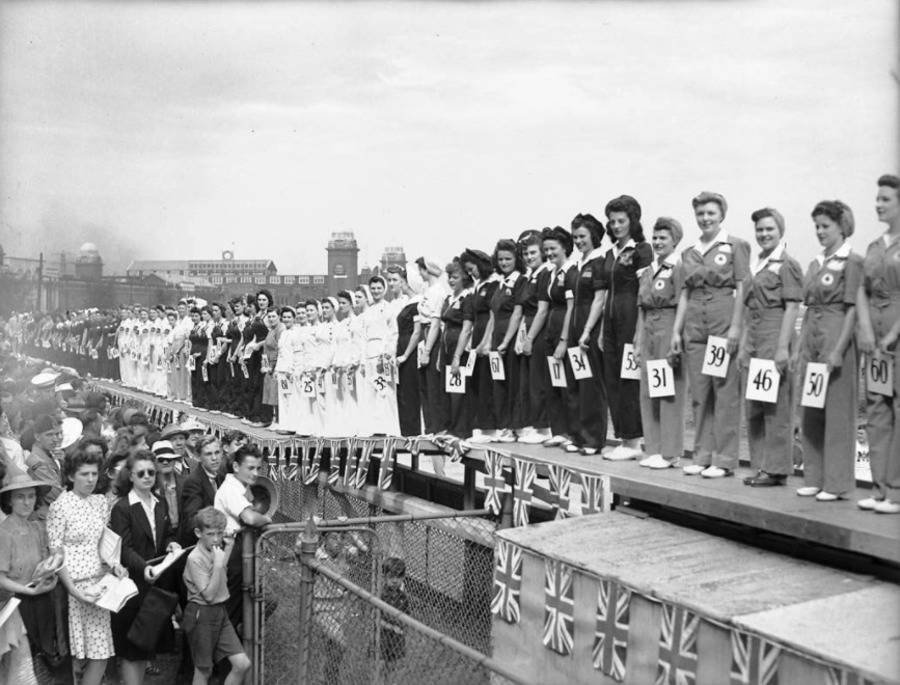 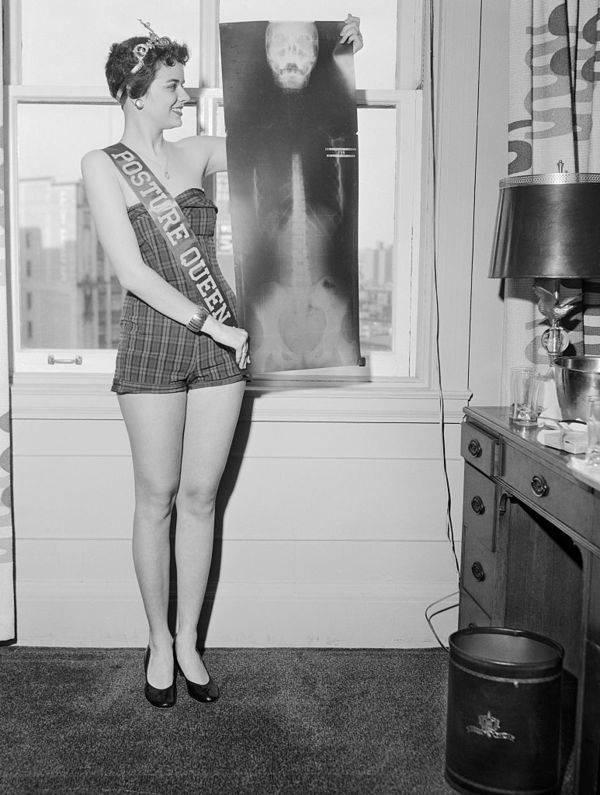 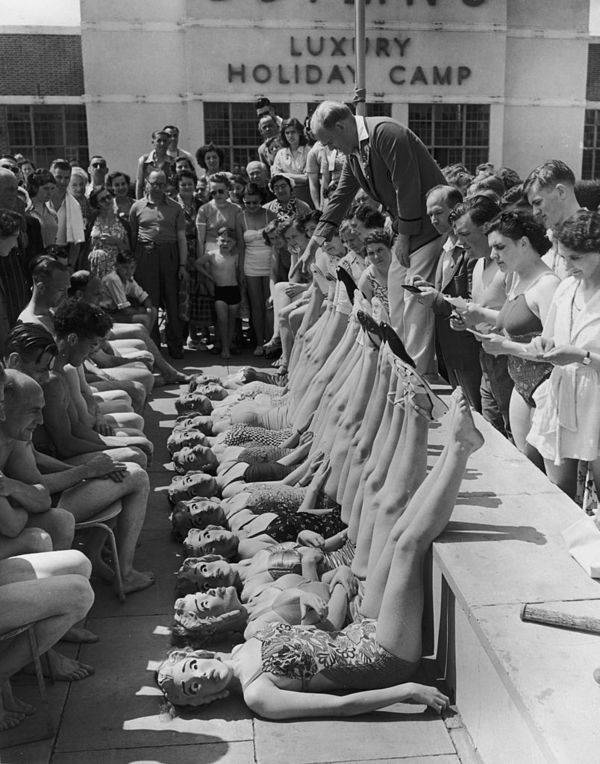 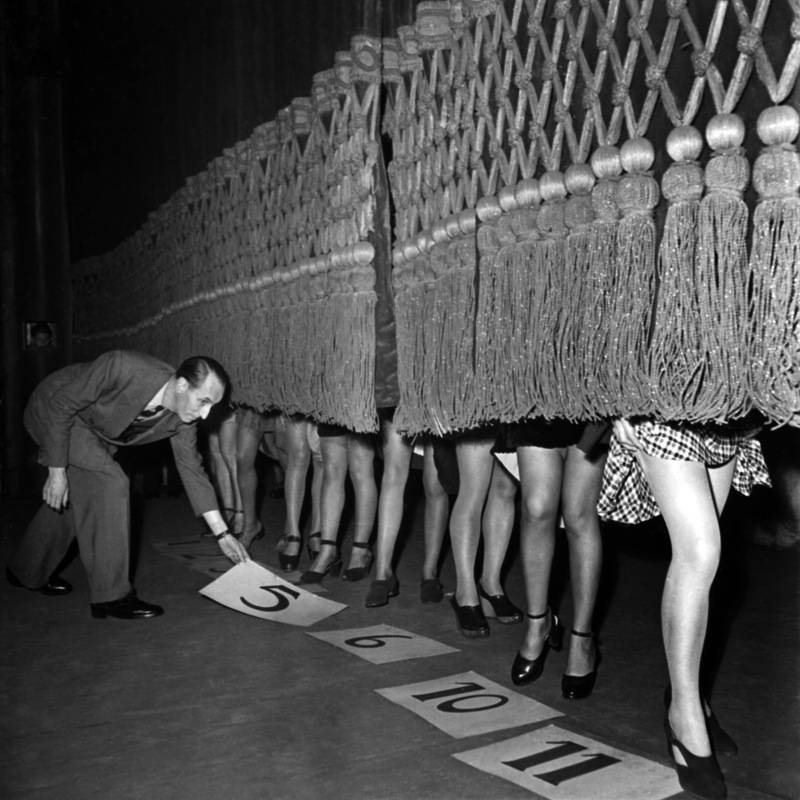 1 of 24
Contestants in the Miss Lovely Eyes beauty pageant in Florida wear masks to obscure the rest of their faces. Circa 1930. FPG/Hulton Archive/Getty Images
2 of 24
A policeman judges an ankle competition in Hounslow, London. 1930. Fox Photos/Getty Images
3 of 24
Actor Geene Courtney models a scarf, skirt, bracelets, and a crown made from hot dogs, frankfurters, and kielbasa in her role as Queen of National Hot Dog Week, as selected by the Zion Meat Products Company. Location unspecified. 1955.Hulton Archive /Stringer/Getty Images
4 of 24
A perfect figure contest. Competitors wore facial masks so that the judges could see only the contestants' bodies. 1947.WATFORD/Mirrorpix/Mirrorpix/Getty Images
5 of 24
Participants in the Beautiful Leg Contest wear pillow cases over their heads so that the judges can see only their legs. Palisades Amusement Park, New Jersey. 1951.Bettmann/Getty Images
6 of 24
The legs of contestants being judged in a Miss World beauty pageant dangle over the side of a plane while staff stands below. England. 1953.Thurston Hopkins/Picture Post/Getty Images
7 of 24
Gail Hooper, 18, from Memphis, Tennessee, selected as Miss National Catfish Queen, holds a 56-pound catfish at the Hotel New Yorker. 1954.Al Pucci/NY Daily News/Getty Images
8 of 24
Ruth Hurschler, a contestant in a Perfect Back contest, is examined and X-rayed by a chiropractor in the final stage of the competition. Los Angeles. Circa 1930.Gamma-Keystone/Getty Images
9 of 24
The winner of the Neatest Figure competition at the Lido in Margate, England wears a hood so that the judges could not be influenced by her face and instead only judge her body. 1946. Fox Photos/Getty Images
10 of 24
At a chiropractic beauty contest, a chiropractor shows a spine replica to model Lois Conway, one of three winners at the contest. 1956.Wallace Kirland/The LIFE Picture Collection/Getty Images
11 of 24
Miss Fabulous Frankfurter Lorraine Cole is crowned Frankfurter Queen by Hebrew National at the Hotel Wellington in New York. 1956. Al Pucci/NY Daily News Archive/Getty Images
12 of 24
Donut Queen Kris Nodland, wearing high heels and a bikini, poses with donuts and the Gingerbread Donut Boy at the Governor Clinton Hotel in New York. 1951. Hulton Archive/Getty Images
13 of 24
Judges and competitors at a prettiest ankle contest. Cliftonville, Kent, England. 1933. Fox Photos/Getty Images
14 of 24
Entrants participate in a Miss Lovely Legs competition in Cliftonville, England. Date unspecified.Keystone-France/Gamma-Keystone/Getty Images
15 of 24
A pair of female judges examine the legs of women who are holding up their skirts during an unspecified beauty contest in New York. Circa mid-20th century. Irving Haberman/IH Images/Getty Images
16 of 24
A contestant participates in a knobbly knees competition at Butlin's Holiday Camp in Filey, England. 1953.Bert Hardy/Getty Images
17 of 24
National Posture Queen Diane Stopky of St. Louis, poses next to an X-ray of her spine. New York. 1957.Leonard Detrick/NY Daily News/Getty Images
18 of 24
Women at Butlin's holiday camp wear Marilyn Monroe face masks. Clacton-on-Sea, England. 1952.Fred Ramage/Getty Images
19 of 24
Miss Donut Queen Pat Marlowe wears a paper crown, a one-piece swimsuit, and platform shoes as she holds donuts in each hand. Location unspecified. 1947. Hulton Archive/Getty Images
20 of 24
Participants line up during the Miss War Worker Beauty Contest in Toronto, Canada. 1942.Wikimedia Commons
21 of 24
Patti Sharon Jones, a 17-year-old high school senior chosen as Miss Posture Queen by the Michigan Academy of Chiropractors, Inc. The unique judging was based upon spinal x-rays submitted by the contestants. 1956. Gamma-Keystone/Getty Images
22 of 24
Beauty contestants are judged solely on their figures, thanks to the introduction of papier mache masks, at Butlin's holiday camp in Clacton-on-Sea, England. 1952.Keystone/Hulton Archive/Getty Images
23 of 24
Contest for the most beautiful legs. Paris. 1946.AGIP/RDA/Getty Images
24 of 24 Let's be honest — many of us think that beauty pageants are a bit ridiculous. There is something slightly off-putting about the idea of being judged solely on your physical assets and not on your talents or your personality.

However, beauty contests have been around for centuries and are, by now, deeply-rooted traditions in most societies. Still, it is interesting to note that, back in the day, many beauty pageants were slightly more bizarre and, dare we say, more fun?

For example, "Miss Lovely Eyes" contests were extremely popular in 1930s America. During these bizarre contests, most of the participants' physical features, except for the eyes, were hidden so as to not distract the judges.

The British must have been deeply impressed with this American contest for they imitated it a couple of decades later. The contestants' bodies were hidden in numbered stalls and their faces were covered with yashmaks. The whole affair was filmed, and the announcer excitedly predicted that in the future, "we might well have competitions for beautiful ears, or even noses!"

"Miss Beautiful Legs" and "Miss Prettiest Ankles" competitions were also popular, especially in Britain and France. During these pageants, the contestants' bodies were usually hidden behind curtains to ensure that they were judged solely on their legs and ankles, and nothing more. The judges took their time in examining the legs and ankles of the participants, sometimes even touching and measuring them.

"Miss Perfect Posture" competitions, held in the 1950s and 1960s, were different from regular beauty contests in that those competing had to possess good posture — clinically good posture. The judges were made up entirely out of chiropractors who checked the contestants' posture using a variety of methods, including X-rays, weighing scales, and plumb bobs (used for determining how straight the back was).

As with most bizarre vintage beauty contests, "Miss Perfect Posture" was nothing more than a publicity stunt, in this case meant to enhance chiropractors' reputation. It is worth noting that "Mr. Perfect Posture" contests were also a fad (albeit a short-lived one). They were far less popular however because the men apparently always slouched.

Then there was the "Miss Frankfurter Queen" contest, the "Miss Donut Queen" competition, and the "Miss NASA Queen" pageant, among many, many others.

And if you were a man, you could have tried your luck at the "Knobbly Knees" competition. We are not exactly sure what the requirements for any of these contests were, but you have to admit that these bizarre vintage pageants do sound rather fun.

Next, take a behind-the-scenes look at the Miss World Muslimah beauty pageant for young Muslim women. Then, read up on the first albino beauty pageant that took place in Nairobi.