Whale Sharks, One Of Nature’s Gentlest And Most Majestic Creatures

Whale sharks are the subject of international mythology for a reason. Get to know them here. 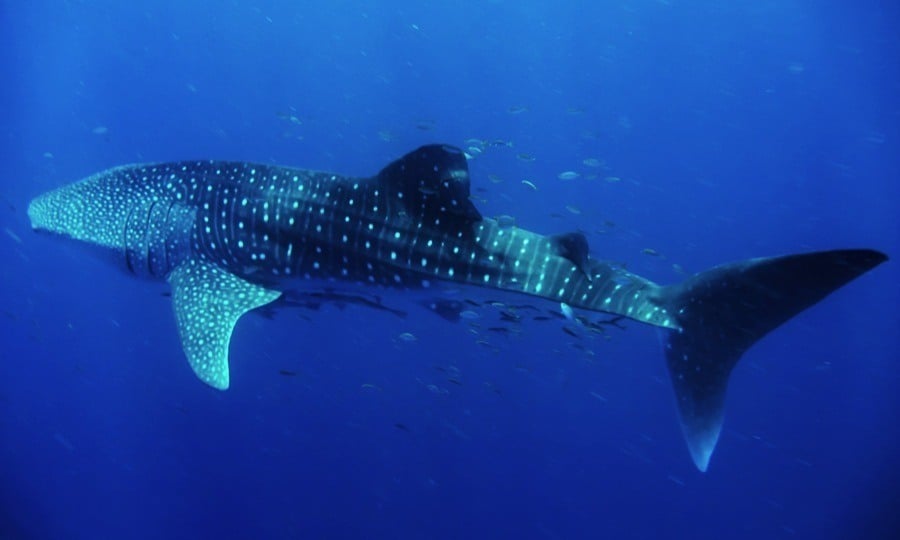 They have an undeniable splendor. Something about the markings on their skin – the way the thatched white lines and hundreds of white dots shout out from the blue-slate canvas of their bodies and the dark waters surrounding them – suggests artistry, as if these designs have been painted on them for a ceremony.

According to Kenyan mythology, the Creator sprinkled handfuls of silver shillings from heaven into the water where they landed on this creature and have remained, in the form of its white spots, ever since. That’s why Kenyans call whale sharks papa shilingi. The Vietnamese have a simpler, more formal title for them, Ca Ong, which means, “Sir Fish.” Filipinos refer to whale sharks as butanding or “gentle giants.”

What are whale sharks? Where do they live and what do we know about them? Get introduced below.

So are they sharks, whales, or what?

First off, whale sharks are sharks, not whales. They are only “whale-like” (whale-ish?) in terms of size and gentle filter-feeding. Their scientific name is Rhincodon typus. The best estimates suggest the species evolved roughly 60 million years ago. They are boneless, with their entire skeletal structure composed of cartilage. 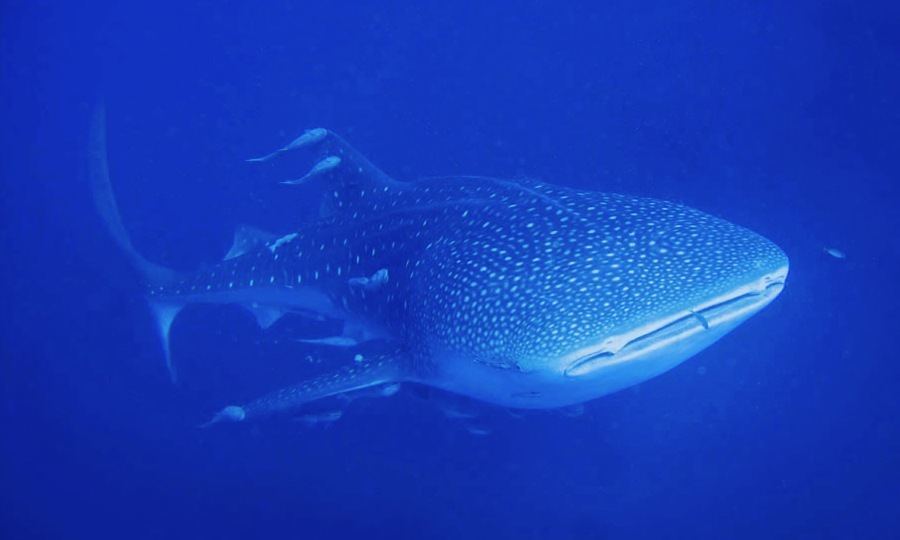 How big do they get and what do they eat?

Sir Fish is, as the World Wildlife Fund reminds us, “the biggest fish and shark in the world.” From mouth to tail, whale sharks can measure up to 42 feet in length. In other words, they are literally about the same length as a bus. They can weigh nearly 50,000 pounds.

Whale sharks put on the pounds by gorging on schools of tiny sea critters, particularly plankton, but also krill and algae. They eat by expanding their flat underscore of a mouth into a giant O shape. That is, a slit becomes a massive, five-foot “O” that sucks in the whale shark’s food.

Where Do Whale Sharks Live?

Whale sharks roam widely through the oceans. They can live almost anywhere between latitudes 30°N and 35°S.

In the Pacific, this range roughly stretches anywhere between Taiwan and Brisbane or San Francisco and Santiago de Chile. In the Atlantic, the whale shark’s distribution reaches from around Boston down to Uruguay and from Morocco to South Africa’s Cape of Good Hope. Practically the entire Indian Ocean can be home to whale sharks as well.

Whale sharks also often approach the coasts. They have been spotted off the shores of more than 100 countries, including Japan, Taiwan, the Philippines, Vietnam, Australia, the Seychelles, Kenya, Mozambique, Honduras, Belize, and Mexico. 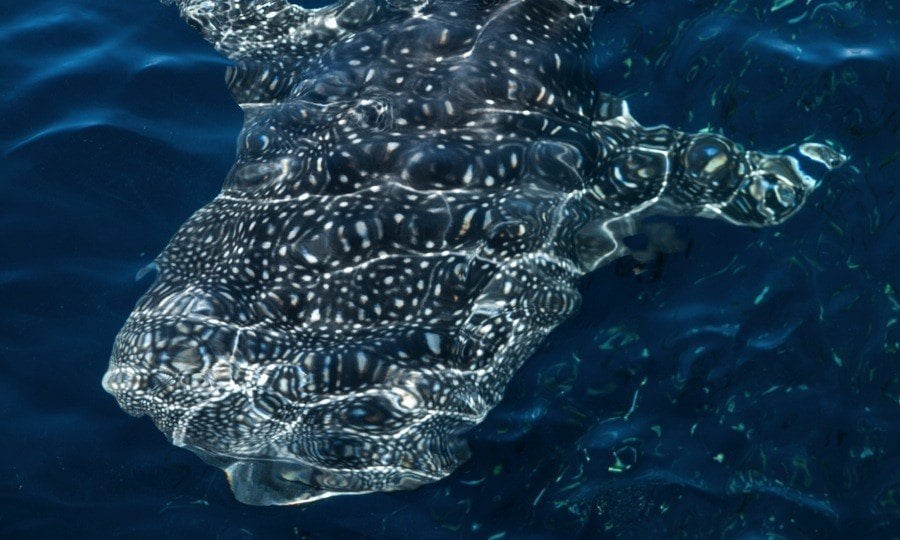 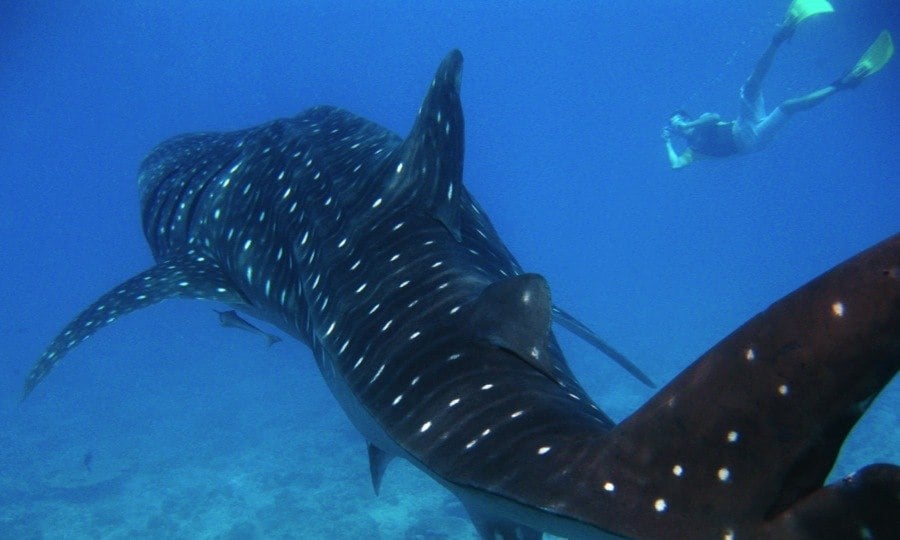 At present, the butanding are not endangered. But they are at risk. The International Union for Conservation of Nature and Natural Resources (IUCN), a global non-governmental organization dedicated to environmental sustainability, classifies whale sharks as “vulnerable,” one step away from “endangered.” According to the IUCN, the main threat is harpoon and net fishing by human communities that want the meat, oils, and fins, which can be seen restaurant “signboards” in parts of Asia.

Since the late 1990s, whale sharks have received legal protections in a number of countries, including Australia, the Philippines and India.

In addition to hunting bans, ecotourism has boosted efforts to conserve and protect whale sharks and their habitats, as local communities can bring in more cash through accommodating travelers than through the sale of whale shark fins and oils.

In the Bicol region of the Philippines, for example, the World Wildlife Fund runs a successful ecotourism program, and in Donsol there is even an annual, month-long whale shark festival to celebrate the community’s new relationship with the butanding.

Where are the best places to see whale sharks up close?

It is possible – and highly recommended – to go swimming with whale sharks. They are not dangerous, and they glide along beneath the surface of the waters so gently that even mediocre swimmers can keep pace. In addition to the Bicol region of the Philippines, whale shark watchers can head to the Belize barrier reef, Honduras’s Utila Bay, Isla Holbox or Isla de las Mujeres in Mexico, Australia’s Ningaloo Reef, or Tofo, Mozambique.

Those who can make the trip will be glad they did. Gliding along within inches of the world’s biggest fish is unbelievable and impossible to forget.