Inside The Legend Of The Banshee, The Most Chilling Spirit In Celtic Folklore

The banshee is usually described as a woman wailing or singing, and according to ancient Irish mythology, she always heralds death. 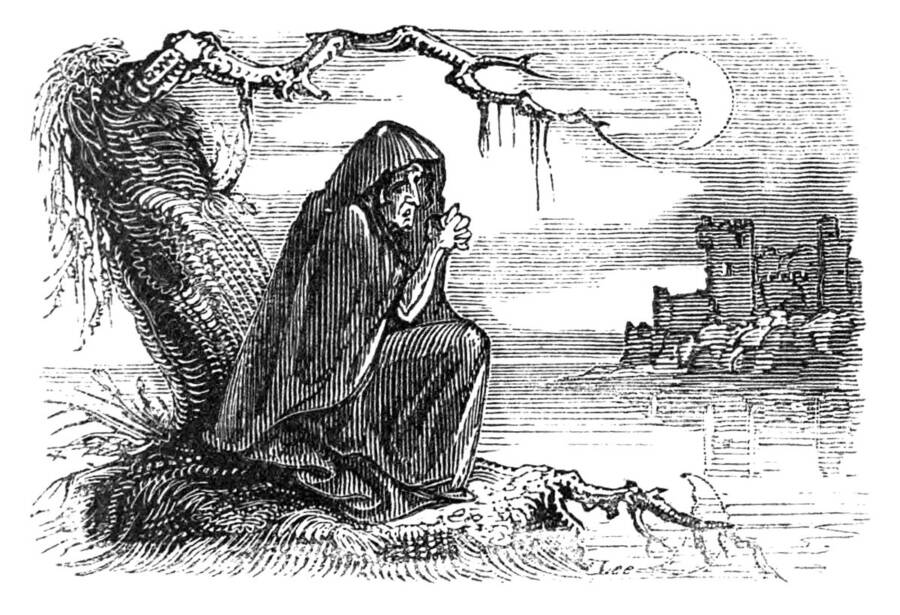 Wikimedia CommonsAn 1825 sketch depicting a banshee as an old woman in mourning.

Long before the banshee graced the silver screen in the 1950s, this spirit of Celtic folklore had terrified people young and old for centuries. Much like the Grim Reaper, the banshee is believed to be an escort to the land of the dead, but there’s far more to this nightmarish spirit than seems at first glance.

Deeply rooted in Celtic mythology, the banshee generally appears as a woman whose mournful song or terrible shrieks signal death. Let’s dive into what makes the idea of her so terrifying.

What Is A Banshee 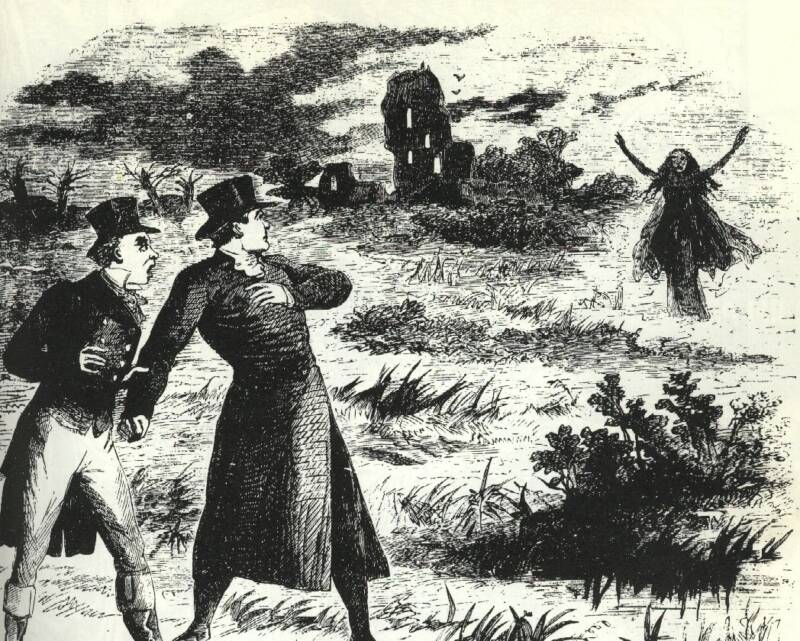 Instead of carrying a scythe like the Grim Reaper and appearing only to the doomed themselves, the banshee is sometimes said to carry a comb — and to wail as a warning for the entire family to know that one of them is about to die.

According to Irish folklore, a bean sídhe or “woman of fairyland” emits an ear-splitting cry. The fairy allegedly warns of the coming doom and is an omen of death. There are varying ideas about her appearance, but one thing stays the same: the banshee generally has long hair. It may be silver, red, white, or gray, but in other depictions, more horrifyingly, she is headless.

In various instances, she is described as dressed in a silver, green, black, or white dress. She may also have a shroud, veil, or cloak covering her face. Reportedly, if the banshee is headless, she carries a bowl of blood but is naked from the waist up.

Sometimes, red glowing eyes are also a part of her description. Sometimes she is allegedly a young woman, sometimes a washerwoman washing blood out of clothes, and sometimes an older woman.

While some of these descriptions are disturbing, legend has it that the banshee doesn’t cause death but only acts as a warning of it coming. It is also said that each family has its own banshee, which may be the reasoning behind the varying descriptions.

Are Banshees Good Or Bad?

Despite the fear and some of the descriptions that go along with them, banshees weren’t all considered vengeful or hateful. Some were said to be beautiful creatures whose song was filled with love and concern for their families over an imminent death.

On the flip side of this, legends also speak of the angrier, more frightening Banshees that we are used to seeing in movies and popular culture. These depictions make for a scarier spirit, and are said to be celebrating the death instead of mourning it — because they hated the person who is about to die.

In one tale, the banshee is the ghost of a girl who died violently and comes back to warn the family when such a death is about to occur again.

In others, the old banshee’s red eyes and screams torture the living. Allegedly, evil banshees cause death by screaming so much that the person goes insane or commits suicide. For the most part, however, banshees typically don’t cause death but foretell it.

The History — And Firsthand Acounts — Of Banshees

The first stories of the banshees have been traced back to 8th-century Irish traditions in which women would sing a sad song to lament someone’s death. Known as keeners, these women were often seen as sinners because they accepted alcohol for payment for their songs. Because of this, they were doomed to be banshees.

The mythology says that banshees will disappear in a cloud of mist when seen, followed by the sound of flapping wings. By the 17th century, the term Banshee began to be used regularly and was mostly accepted. 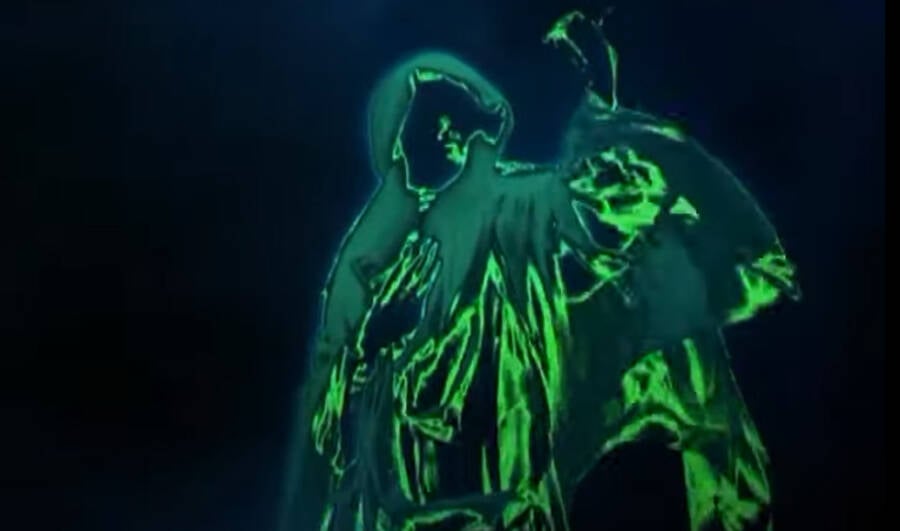 Firsthand written accounts of the Banshee go back to 1380, according to the Irish Post, with some references to them in some Norman literature.

In the Middle Ages, the idea of the Banshee was widely accepted in Ireland. They believed that the Banshee would watch over the family until all of them died.

They also thought that banshees watched just over the main Irish families—the O’Neills, O’Connors, O’Briens, O’Gradys, and Kavanaghs. Human Banshees supposedly started appearing soon after the firsthand accounts began. In 1437, a seer went to King James I of Scotland and predicted his murder.

Another famous alleged encounter was recorded in the memoirs of Lady Fanshawe in 1649. She and her husband were visiting a friend when a piercing cry woke her up.

At her window, she reportedly saw a pale red-haired woman wearing white leaning toward the window, who called out, “Ahone, Ahone, Ahone,” or the ancient Irish ochón, which means “alas” and is used to show great despair. They found out later that their friend’s cousin, who was also staying there, had died overnight.

In 1801, the Commander in Chief of the British forces in Ireland allegedly received a visit from a banshee after attending a party. Once back home, his guests, wife, and maid reported hearing sounds coming from outside the window.

They said they heard the name “Rossmore” yelled three times. The next morning, they discovered he had died about the same time.

Other stories highlight the experiences of soldiers who thought they heard the banshee’s wail before they began the battle. They were so terrified of their possible deaths that they abandoned the battles altogether. The fleeing soldiers were often killed by their enemies or their own armies due to desertion.

Even the late 1940s produced alleged sightings in Ireland of the banshee, according to the Derry Post.

There is a tale of an older man nearing death when a knock came at the door. When a young girl answered, she heard a moaning sound and reportedly saw an older woman dressed in white crying. The man died later that night.

In another tale, an older man had been suffering from what he thought was a toothache. He saw a white sheet, which his wife later thought to be his own death shroud, and his son allegedly saw an old woman moaning. Although the man soon went to a doctor, he was beyond help and soon died.

Whether real or imagined, stories of the banshee play on our most basic fears about death and losing those we love.

After reading about the banshee, read about another terrifying creature, the Wendigo. Then, about the most terrifying Native American monsters from folklore.