What You Need To Know About The Zika Virus

The rapidly spreading mosquito-borne virus has been linked to brain damage and birth defects in babies. Here's what you need to know about the Zika virus. 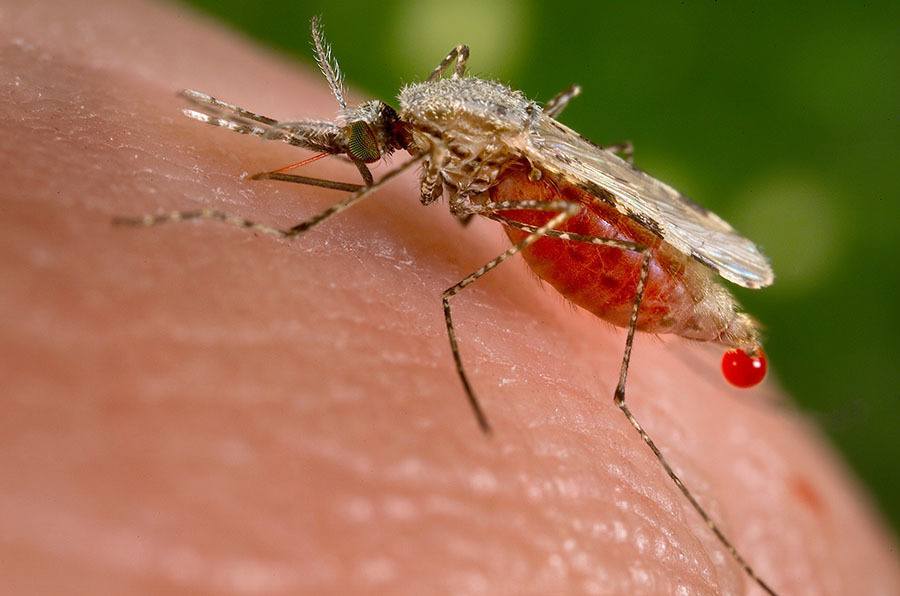 Zika is a mosquito-borne disease whose recent outbreak has many epidemiologists concerned. Image Source: Wikimedia Commons

If you’re hoping to catch a break from dreary winter weather, you should be cautious about your travel choices, according to a recent missive from the Centers for Disease Control and Prevention.

On January 15, the CDC released a travel advisory warning pregnant women or those who hope to be pregnant to avoid visiting the 14 countries (primarily in Latin America and the Caribbean) where there have been confirmed outbreaks of the Zika virus — a mosquito-borne illness which medical experts think may be linked to serious birth defects such as microcephaly, where the newborn has brain damage and a small head.

On Wedsnesday, the CDC reported that there are a “dozen or so” confirmed cases of Zika in the U.S. Here’s what you need to know:

What is the Zika virus? 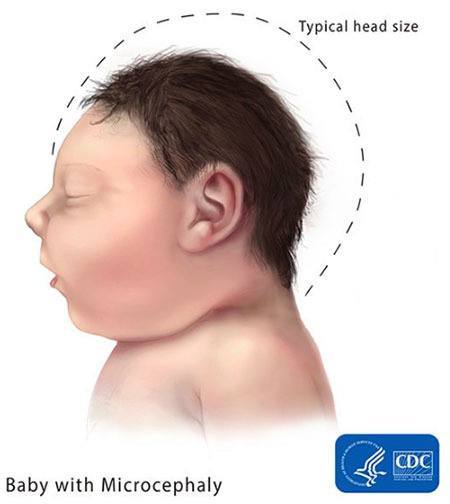 A diagram of a baby born with microcephaly. Image Source: Twitter/CDC

Zika is a mosquito-borne virus which can spread from an infected pregnant woman to her baby, and has been linked to microcephaly in infants, wrote the CDC. Only around 1 in 5 people exhibit symptoms of the virus, which typically last for a few days and include joint pain, conjunctivitis, headaches, fever and rashes.

The virus was first discovered in 1947 in a “feverish rhesus monkey living in the Zika Forest of Uganda,” the Washington Post wrote. Until 2007, only 14 human cases of the disease had been documented, the Post added. It traveled — specifically to the southwestern Pacific Yap Island — and within a few months, “nearly three-quarters of the island’s 11,000 or so residents older than 3 had been infected.”

At present, there are no known vaccines or treatments for Zika. The CDC recommends that if you do have it, you get plenty of rest, drink fluids and wear mosquito repellent so that the virus has less of a chance of infecting another mosquito, which can travel and thus infect others.

Where is the Zika virus? 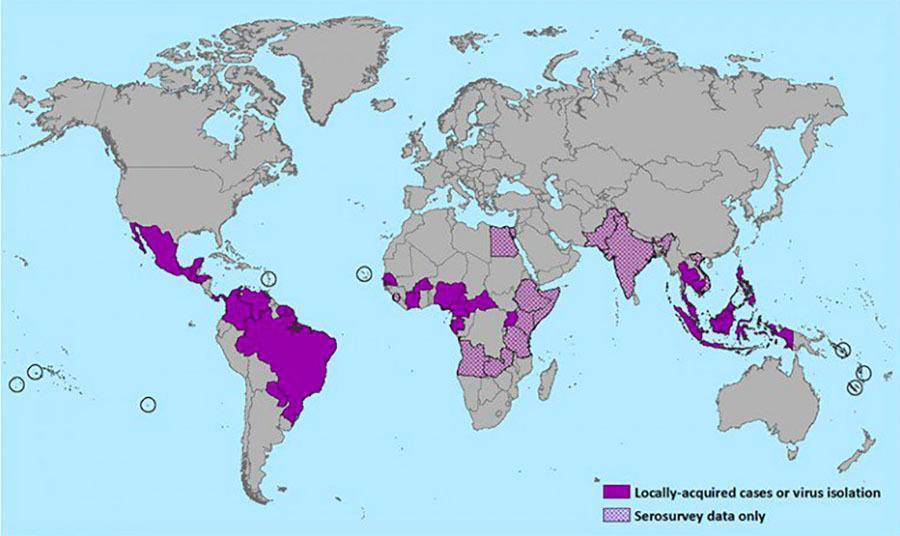 A map of countries where Zika cases are confirmed. Image Source: Twitter

The outbreak began last May in Brazil, the CDC said. At present, the country is dealing with more than one million confirmed cases of Zika, as well as nearly 4,000 suspected cases of microcephaly, the BBC reported.

Since then, the virus has traveled via the Aedes aegypti mosquito, which also spreads dengue and chikungunya. As of Jan. 15, the CDC identified the following countries where a Zika outbreak has been confirmed: Brazil, Colombia, El Salvador, French Guiana, Guatemala, Haiti, Honduras, Martinique, Mexico, Panama, Paraguay, Suriname, Venezuela and the Commonwealth of Puerto Rico.

It has since spread to the U.S.: On January 12, a case of Zika was confirmed in Houston, Texas, and the first baby born in the U.S. with Zika was reported in Hawaii. Florida and Illinois residents have also been confirmed as infected. In all instances, those infected had returned from travel in countries where Zika has been found.

What is being done to stop the spread of the Zika virus?

Over the past few months Brazil — considered to be the origin point for the outbreak — has spent “more than $300 million to battle the mosquito, mobilizing hundreds of soldiers in the effort and going door-to-door to try to wipe out places where mosquitos breed,” the Washington Post reported.

The World Health Organization and CDC are assisting the Brazilian government in its efforts to investigate the cause and spread of the virus, as well as more firmly establish the link between the virus and microcephaly. According to the CDC, Zika was present in the bodies of two newborns with microcephaly who died, and in the placentas of two women who miscarried children with microcephaly.

How do I protect myself from the Zika virus?

Beyond avoiding travel to countries with confirmed cases of Zika, the CDC recommends the following: