A former slave, William Dorsey Swann hosted some of America's first drag balls in Washington D.C. in the late 1800s — and fought for queer rights long before Stonewall.

Born into bondage, William Dorsey Swann was robbed of all prospects for his life and spent years just trying to survive. The African-American slave spent his youth on a Maryland farm in sheer uncertainty until the Civil War came to an end. Newly liberated and gay, Swann used his freedom to lead a queer resistance group — and become the first drag queen in America.

Swann not only became the first person in the United States to self-identify as a “queen of drag,” but grew into a pioneer of the gay liberation movement. An unassuming hotel waiter by day, he curated a following of like-minded individuals by night — when he organized and attended flamboyant balls in Washington, D.C.

Swann endured grotesque sexual bigotry and racism for his unorthodox style and the pageantry of his events. According to Channing Gerard Joseph’s The House of Swann, he was jailed and humiliated as an early victim of anti-LGBTQ hatred — and laid the groundwork for that community’s resistance.

The Life Of William Dorsey Swann

Born William Henry Younker in 1858 in Washington County, Maryland, Swann was the fifth of 13 children. His mother Mary Jane Younker was an enslaved housekeeper and his father Andrew Jackson Swann, an enslaved musician and wheat farmer. When the Civil War erupted in April 1861, their lives grew even harder.

The legal property of Ann Murray, the family’s Protestant orientation didn’t sit well with her. She forced them to be baptized and confirmed as Catholics and made herself Swann’s godmother. They lived in Hancock by the Mason-Dixon Line as tensions brewed between slaveholding southerners and abolitionist northerners.

During four years of scarce rations and wartime tensions, the family found solace in the songs and dances of holidays like Christmas. With the Emancipation Proclamation ratified in 1863 and the Civil War’s end two years later, they bought a farm nearby. Swann began working as a child — and would never go to school. 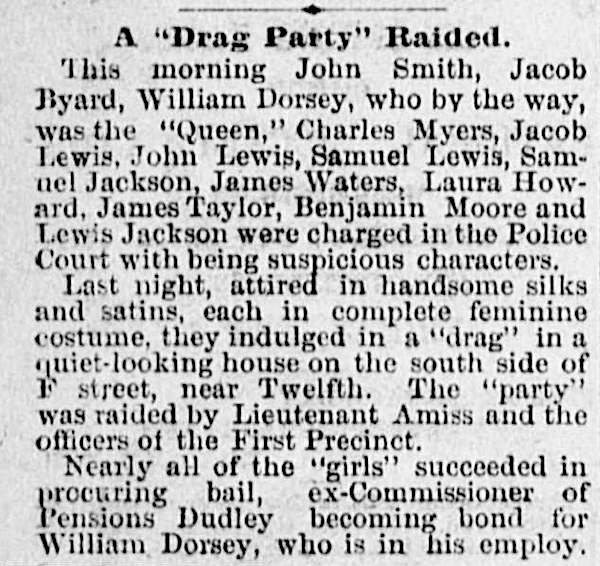 Library of CongressA newspaper clipping on one of Swann’s arrests.

In 1880, he traveled to Washington, D.C., in search of higher wages. He had spent years as a hotel waiter, but now earned enough as a janitor at a business college to send money back home. Swann learned to read and write by day, and socialized with young Black men desperate to express their true selves by night.

Since that was impossible to do in public back then, Swann began orchestrating secret “drag” parties — with the name rooted in the “grand rags” or masquerade balls of the antebellum. With newfound friends who were also former slaves, Swann organized food, drink, music, and dances for his gatherings.

“They nearly all had on low neck and short sleeve silk dresses, several of them with trains,” one source said of the drag party attendees. “They all wore corsets, bustles, long hose and slippers, and everything that goes to make a female’s dress complete.”

It didn’t long for these parties to be targeted by racist police, who were terrified of gender fluidity.

The First Drag Queen In America

While the date of Swann’s first drag party remains unclear, records of his first arrest are easily found. In September 1882, he was jailed for stealing plates, silverware, and other party supplies. His invite-only events took time and effort and were only held once per year, and became increasingly risky to attend.

In 1887, Swann and his peers were arrested on a charge of being “suspicious persons.” It was the first time the country at large learned of Swann and was confronted with the fact that the butlers, cooks, and waiters of their days led very different lives by night. This troubled neighbors and police, but fascinated psychiatrists.

Dr. Charles Hamilton called Swann’s group an “organization of colored erotopaths” and a “lecherous group of sexual perverts” in an 1893 medical journal. Dr. Irving C. Rose described them as “a band of negro men with … androgynous characteristics.” Ultimately, Swann’s worst experience came in 1888. 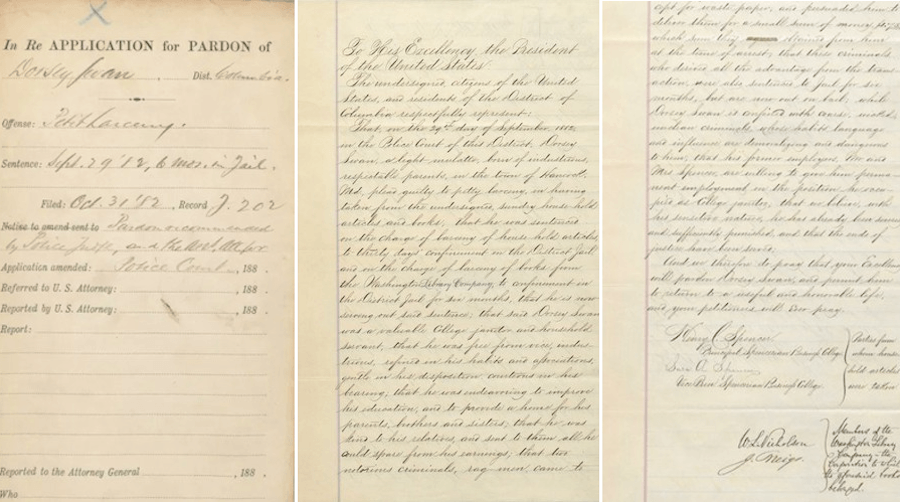 An 1888 raid had Swann block police at the door while all attendees but 13 fled through the windows. He told one of the officers: “You is no gentleman,” before police ripped off his dress and threw him in a cell. Swann’s determined protection of his community became one of the first cases of LGBTQ activism.

Charged yet again in 1896, his crime was “keeping a disorderly house” — a euphemism for running a brothel. Since his ball had served no such purpose, he lobbied President Grover Cleveland for a pardon. The request was denied, and Swann convicted and sentenced to 10 months.

While he never personally considered himself an activist, Swann’s act of safeguarding persecuted minorities certainly qualified. His request for a pardon and its political protection for LGBTQ rights was in itself historic — as Swann was the earliest known American to do so.

Swann would never be celebrated in his time. Practically cast out of the capital, he returned to Hancock in 1900. He died in December 1925, when city officials burned his house to the ground — destroying potentially historic artifacts as a result. In the end, however, his legacy reverberates to this day.

After learning about William Dorsey Swann, read about how the Stonewall riots changed the history of gay rights. Then, learn about the famous drag queens of the early 20th century.