Yolanda Saldívar was the president of Selena's fan club, but after she was fired for embezzlement, she murdered the "Queen of Tejano Music" on March 31, 1995.

During the 1990s, Yolanda Saldívar was living every music fan’s dream: She was a trusted friend and confidante of her idol, the Latina superstar Selena Quintanilla. The two first became acquainted after Saldívar founded the singer’s fan club.

Saldívar soon became part of Selena’s inner circle, managing both official fan club business as well as the singer’s boutique shops. Little did anyone know that Selena’s “number one fan” would one day become her murderer. 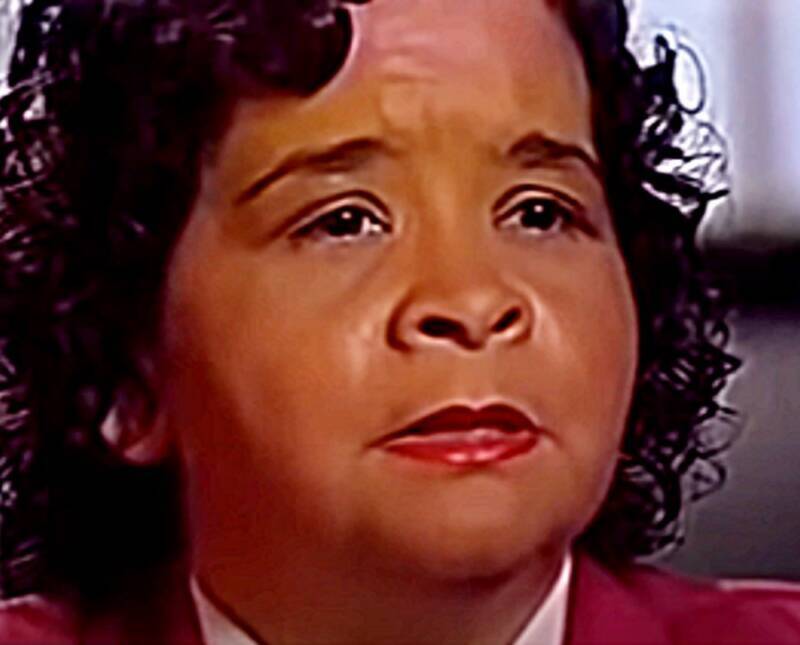 YouTubeYolanda Saldívar, the woman who killed Selena Quintanilla. After Selena’s murder in 1995, Saldívar was sentenced to life in prison.

In March 1995, Yolanda Saldívar gunned down the singer inside a Days Inn in Corpus Christi, Texas. By that point, Saldívar had been estranged from Selena’s family due to financial issues related to Selena’s boutiques. When they met, Saldívar was supposed to hand over her last business documents to Selena. Instead, she fatally shot the singer.

Afterward, Saldívar became embroiled in a nine-hour standoff with authorities, during which she threatened to kill herself. Meanwhile, Selena’s shocking murder at the age of 23 rocked the music industry and horrified fans. Even today, Saldívar remains one of the most hated women in Texas.

But who was Yolanda Saldívar, the woman who would murder Selena?

How Selena Became The Queen Of Tejano 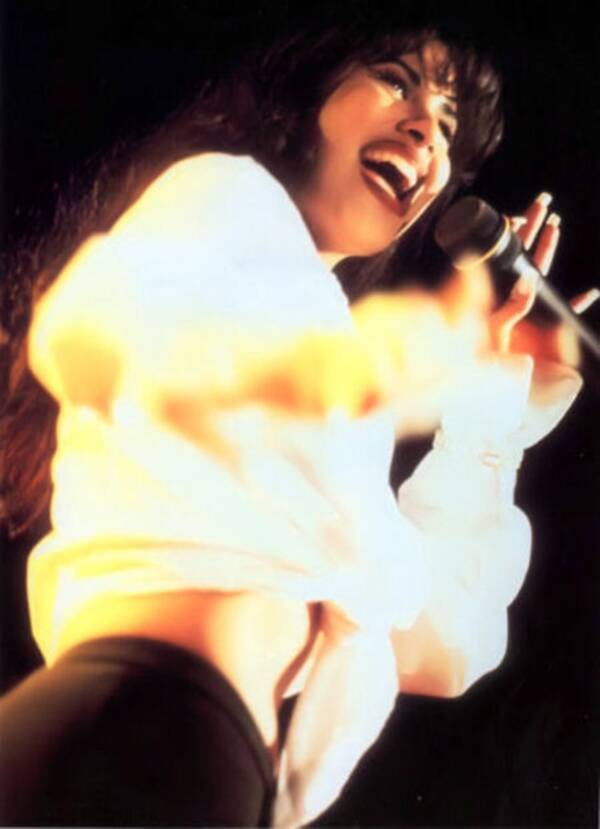 FlickrSelena Quintanilla was a beloved Latina artist at the cusp of superstardom in America.

Selena Quintanilla-Pérez — known to her fans simply as Selena — was a rising star in the American music scene during the 1990s.

A third-generation Mexican-American singer, she made her name in the music industry as the lead singer of Selena y Los Dinos. The band was formed under her father’s mentorship with her two siblings.

With Selena’s singing chops and distinct flare, the band evolved into a popular local act around Corpus Christi, Texas, where the family lived. They produced Tejano songs, a distinct music genre in South Texas born out of the state’s blending of Mexican and American traditions.

In 1986, Selena won female vocalist of the year at the Tejano Music Awards — at the age of 15. In 1989, she produced her first self-titled album Selena and released other successful albums afterward.

Selena reached the ultimate dream when her concert album Selena Live! won a Grammy for best Mexican-American album in 1994.

“This lady was destined to be an international superstar,” said Leroy Shafer, assistant general manager of the Houston Livestock Show and Rodeo, where Selena once drew a crowd of 60,000 people. “In many aspects she already was. She could sell out any pavilion in South Texas. She was on her way to standing beside Madonna.” 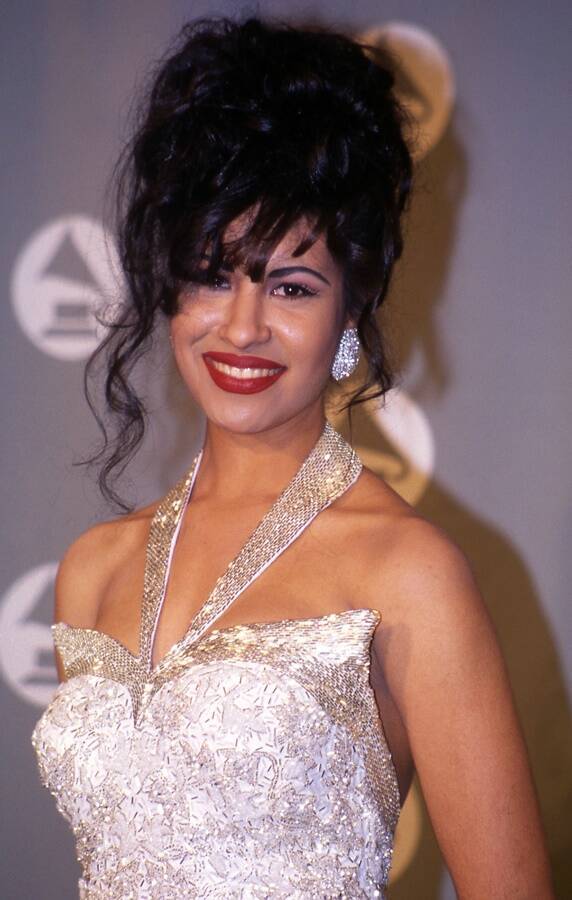 Vinnie Zuffante/Getty ImagesSelena was often referred to as the “Queen of Tejano” and the “Mexican Madonna.”

But Selena’s popularity came from more than just her ability to create beautiful music. Her success in the music industry in North America — and how she achieved her success as a proud Latina performer — made her an inspirational figure among her fans.

“She succeeded in all these ways that it is assumed that brown women won’t,” said Sarah Gould, the lead curatorial researcher at the Institute of Texan Cultures of University of Texas, San Antonio.

“She was a businessperson. She owned fashion boutiques and designed the clothes. She was an award-winning singer. She was a huge source of pride for many Mexican-Americans, because like so many of them, she was third generation and working class.”

Before Selena Quintanilla’s death in 1995, she was undoubtedly on her way to making more of her dreams come true. But then she was shot to death by her fan-turned-business partner, Yolanda Saldívar. 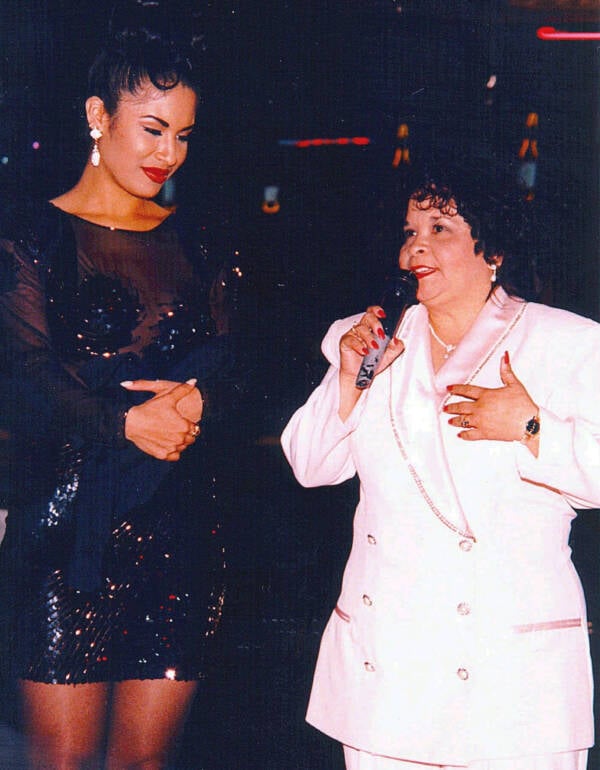 Today, Yolanda Saldívar is mostly known as the woman who killed Selena. But before she became Selena’s killer, Saldívar had been a key figure in the artist’s inner circle.

When Selena met Saldívar, she was a registered nurse from San Antonio and the founder of the Selena Fan Club in Texas. Born in 1960, Saldívar was about 11 years older than Selena. But before long, Saldívar was known as Selena’s “number one fan” who “rearranged her life” in order to be close to the singer — even if it meant quitting her former job.

After years of being the president of her fan club, Yolanda Saldívar was promoted to manage the singer’s boutiques in Texas. Meanwhile, the two forged a tight relationship. Saldívar was given a key to Selena’s home and, by Saldívar’s own account, the star even called her “mom.”

But as Saldívar gained increasing access to Selena’s empire and finances, she erupted whenever anyone questioned her authority.

“She was very vindictive. She was very possessive of Selena,” said Martin Gomez, a fashion designer for Selena’s boutiques, who shared an office with Saldívar. “She’d get, like, very angry if you crossed her. She would play so many mind games, say people had said things they hadn’t said.”

Gomez described instances of sudden spending by Saldívar, which fed into suspicions that she was mishandling the company’s finances. Gomez also said that she was openly hostile to those whom she viewed as competitors for Selena’s attention and that she tried to take credit for people’s work.

Selena, in turn, was quite protective of Yolanda Saldívar. The late artist’s friends and family said she defended the woman whenever Saldívar was criticized at work.

Thousands of fans flocked to a convention center where a public memorial took place after Selena’s death.

“Selena was a darling girl, very sweet, very sweet, but I never, ever thought Selena treated her special. She was nice to all of us,” Gomez said. “But it got to the point where Yolanda was the leeway between us and Selena, she was the voice, and she tried to shut everyone out.” Gomez eventually resigned from the company due to Saldívar’s “unhinged” behavior.

One woman who shared an apartment with Saldívar even alleged that she had a shrine dedicated to the star inside her home.

But the bond between the two women eventually soured when Selena’s family suspected that she was stealing money from them. After the family confronted her about it, Saldívar was fired.

“There was no fight when she was released of her duties. She just said, ‘Okay,'” recalled Jimmy Gonzalez, director of marketing at Selena’s Q Productions studio in Corpus Christi. “Selena, not thinking anything, proceeded to the motel, and that’s when the lady pulled the gun on her.”

The Murder Of Selena Quintanilla

Yolanda Saldívar has done a number of press interviews during her time in prison, including this one with 20/20 News.

On March 30 and March 31, 1995, Selena went to meet Yolanda Saldívar at the Days Inn motel in Corpus Christi to retrieve the remaining business documents. But what was supposed to be a quick exchange turned into a two-day affair that ended with Selena’s murder.

At some point, Saldívar told the singer that she had been raped on a previous trip to Mexico. Selena took Saldívar to the hospital, but the hospital would not perform a full exam since Saldívar was not a resident of Corpus Christi. Her alleged assault also happened outside of the city’s jurisdiction.

When they arrived back to the motel, the women began to argue. A hotel staffer named Trinidad Espinoza overheard the shouting until — suddenly — a loud boom “like a flat tire” startled him. Espinoza then witnessed Selena, dressed in a jogging suit, running out of the room. 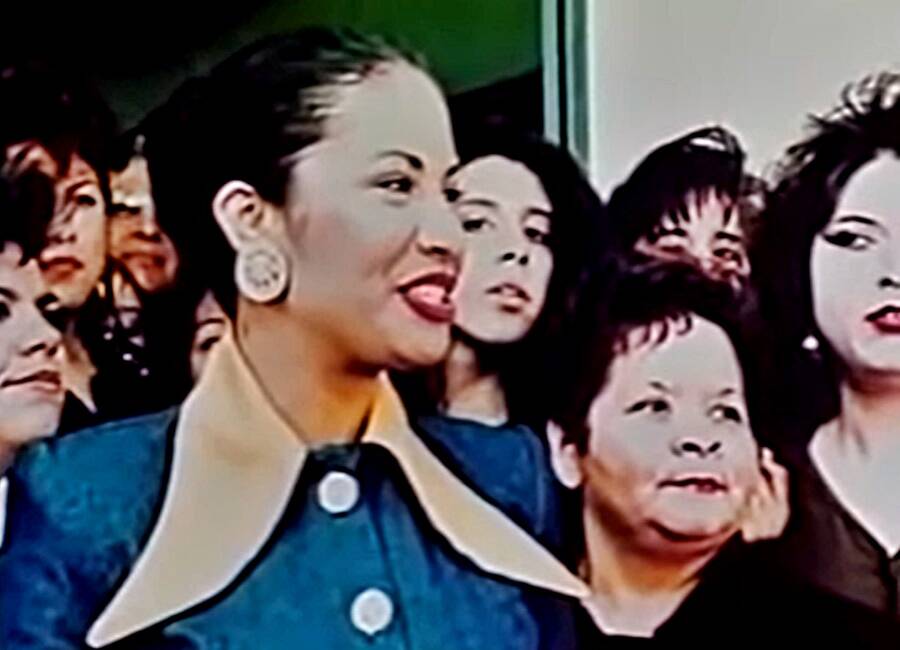 YouTubeYolanda Saldívar, the woman who killed Selena Quintanilla, will be eligible for parole in 2025.

“I saw another woman chasing her. She had a gun,” recalled Espinoza. He said Saldívar stopped before she reached the lobby and went back to her room.

After Selena reached the lobby of the motel, she slowly collapsed on the floor. Blood pooled from the bullet wound in her back, which was later found to have severed an artery.

“She looked up at me,” said Ruben Deleon, the motel’s sales director. “She told me and her eyes rolled back.”

Shortly after the shooting, the beloved star died at the hospital. At the time, she was two weeks shy of her 24th birthday. This happened before the police were able to bring Selena’s killer into custody.

After Yolanda Saldívar shot Selena, she dragged police into a stand-off, which lasted nine hours. During this time, she repeatedly threatened to kill herself, until she finally surrendered to the cops.

What Happened To Yolanda Saldívar, The Woman Who Killed Selena?

Yolanda Saldívar, then 34 years old, was convicted of first-degree murder and sentenced to life in prison. She’ll be eligible for parole in 2025. She has since been serving her sentence at the Mountain View Unit, a maximum-security women’s prison in Gatesville, Texas. 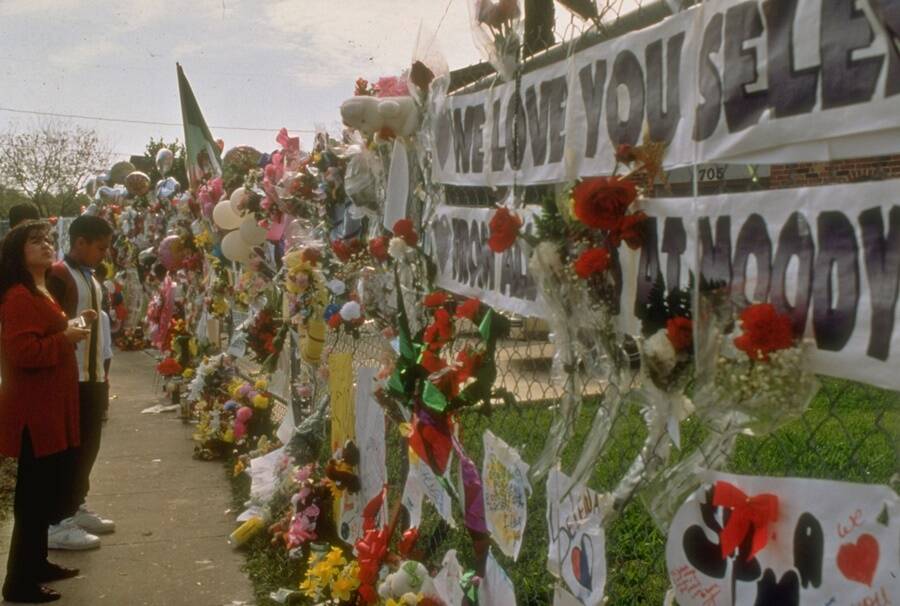 Saldívar remains infamous today as the woman who shot Selena. She has since spoken about Selena’s murder in a handful of interviews with the press during her incarceration. All this time, she has maintained her innocence, claiming the murder was a horrible accident.

“She told me: ‘Yolanda, I don’t want you to kill yourself.’ She opened the door. When I told her to close it, the gun went off,” Saldivar told police. She repeated the story during her interview with 20/20 News after Selena’s death.

But Selena’s family and friends are not convinced, believing wholeheartedly that Selena’s murder was a premeditated crime by Yolanda Saldívar.

“She had a big heart for everyone, and that’s what cost her her life,” Gonzalez said of the slain singer. “She didn’t think anyone would be so cruel.”

After learning about Yolanda Saldívar, the woman who killed Selena Quintanilla, take in the full story of Judy Garland’s death, and then go inside the mystery behind Marilyn Monroe’s shocking death.