The boy is expected to spend weeks recovering from 2nd and 3rd degree burns to his face, arm, and hand. 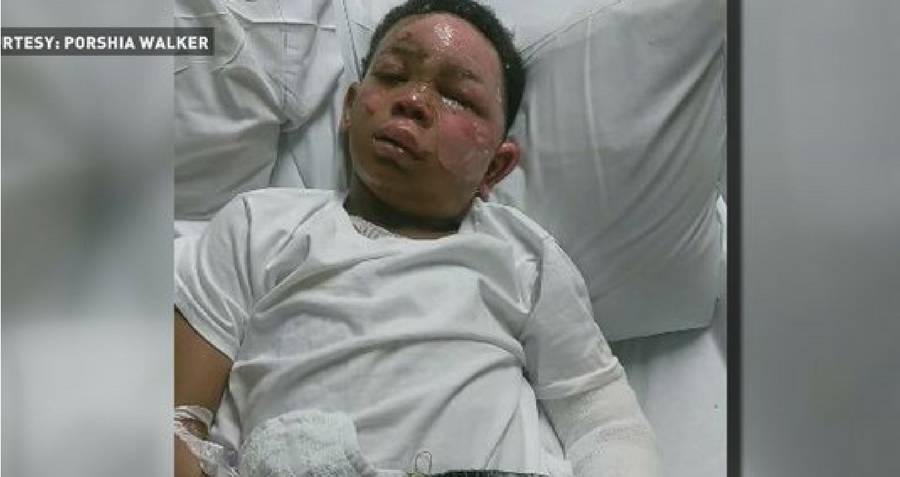 A seven-year-old boy from North Carolina is expected to spend weeks in the burn unit, after setting himself on fire as part of an online game.

Rondarius Barnhardt is the latest victim of a YouTube craze known as the “Fire Challenge.” As part of the challenge, people spray themselves with chemicals or other flammable liquids, and then set themselves on fire, recording the event on video.

Barnhardt’s mother, Porshia Walker, said that her son saw the YouTube fire challenge videos online, and attempted to participate when it went horribly wrong. She said that Rondarius and his brother first attempted to light a fire on his hand.

“Their next idea was to spray more on something, which was Rondarius’ shirt,” she said, “He lit it and in one light – it went up in flames.”

While Rondarius’ mother was not home, his grandfather was. When he saw what was happening, he attempted to put the fire out. When it didn’t work, Rondarius pulled his shirt off, which spread the flames to his face.

“He’s a pretty boy. He put chemicals all in his hair, and make sure his face is shiny, so he had Vaseline on it,” said Walker. “So I guess when he pulled his shirt off, it lit his face on fire. All this happened while the bus was outside…in a flash.”

Rondarius was taken to the Wake Forest Baptist Medical Center, where he was treated for 2nd and 3rd degree burns on face, arm, and hand. While he is expected to recover, doctors say he will need extensive skin grafts to treat the severe burns, and will likely spend weeks in the burn unit.

Walker is now taking this opportunity to warn other parents to pay attention to what their kids are watching online.

“With anything being on the Internet, our kids are able to get at it. And it’s dangerous because, they can act out like my son did,” she said.

Videos of the YouTube fire challenge have been floating around the site since 2014, but have picked up traction in the past year.

In 2016, a 12-year-old boy from Queens, N.Y., landed himself in critical condition after setting himself on fire with rubbing alcohol, as part of the YouTube fire challenge.

Back in 2014, a 16-year-old boy from Kansas set himself on fire for the challenge, and ended up in the hospital with 2nd-degree burns on his chest.

Firefighters, doctors, and police officers have all spoken out against the challenge, warning people of the seemingly obvious dangers of setting oneself on fire, though videos of the challenge continue to pop up online.