The Story Of Yule, The Raucous Viking Celebration Of Winter That Inspired Christmas

From the holiday ham to the evergreen in your living room, here’s how the pagan celebration of Yule influenced modern Christmas traditions. 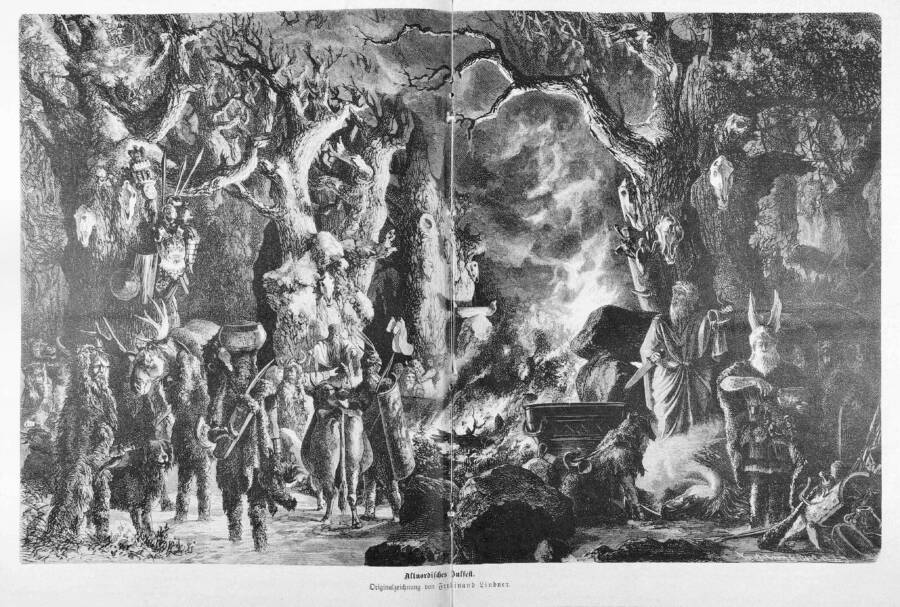 Wikimedia CommonsYule, or the Viking “Christmas,” marked the end of the solar year and was celebrated with many festivities on the darkest night of winter.

Christmastime. Noël. Nativity. Yuletide. Even the many different words we use to describe the Christian holiday that celebrates the birth of Jesus Christ reflects how this festival was born of a wide array of cultures. For the Vikings, Germanic tribes, and other peoples of pre-Christian Europe, this celebration was actually meant to honor the winter solstice.

Known as Yule, the celebration commemorated the events of the waning year and honored the gods with a festival of song, food, drink, and sacrifice. But with the steady spread of Christianity throughout Europe, many pagan beliefs and celebrations, including Yule, were stamped out.

Today, hints of these ancient faiths and rituals of the Vikings can be found in some of the most popular Christmas traditions. This is the story of Yule, the Viking winter festival that helped create the modern Christmas celebration.

Yuletide Commemorated The Winter Solstice And The Return Of Sunlight 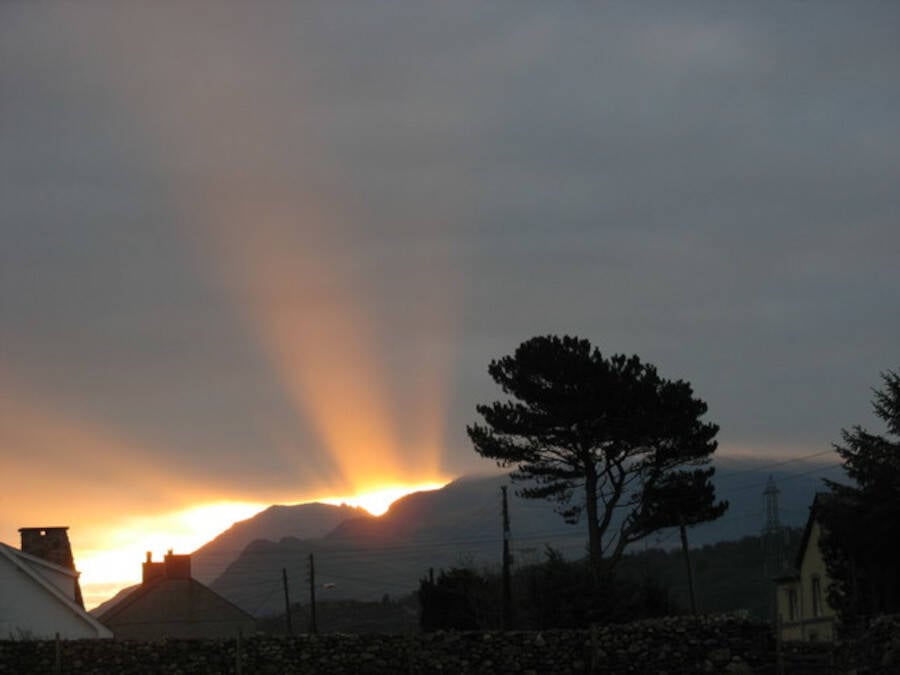 Wikimedia CommonsGermanic pagans believed that during the winter solstice, which marks when the Northern Hemisphere is at its furthest point from the Sun, the forces of magic were stronger than usual.

The earliest mention of Yule is found in the work of a chronicler and prolific historian called Bede, an English monk who was instrumental in the spread of Catholic Christianity in Northern England.

Writing in 725 A.D., Bede described the holidays of pagan Britons, Anglo-Saxons, Vikings, and other Germanic groups, noting that the old pagan calendar combined the Roman months of December and January into a single period called Giuli. He wrote, “The months of Giuli derive their name from the day when the Sun turns back [and begins] to increase.”

In other words, this double-month was built around the winter solstice, the time of year when daylight, which decreases steadily during the winter, starts to increase again. 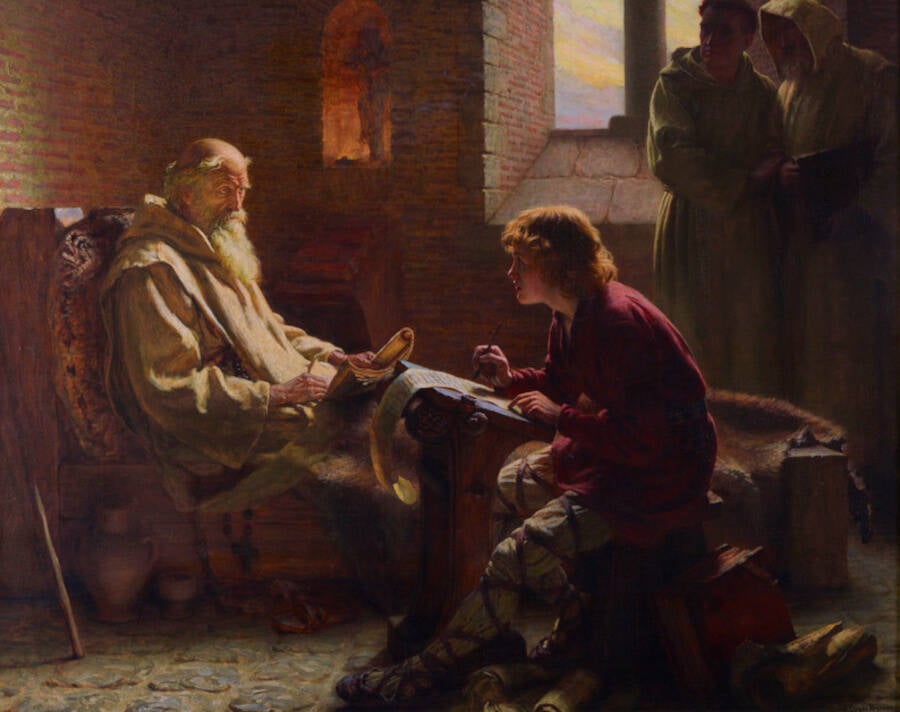 Wikimedia CommonsThe Venerable Bede, an English monk and missionary, was among the earliest writers to record the existence of Yule.

To the ancient Vikings and other Germanic peoples, many of whom lived in the far northern reaches of Europe where the absence of the winter Sun is felt strongest, the return of long sunny days was considered a rebirth and was celebrated in the festival of ġēol, or jól.

The origins of these words are murky, but generations of etymologists believe they are the basis of the modern word “jolly” in English.

The whole season, called “Yule-tide,” was among the most important holidays in pagan Europe. From modern-day Estonia to the north of England, Yule was the highlight of the deep midwinter, a welcome respite from the darkness and the biting cold.

The Traditions Of Viking Christmas 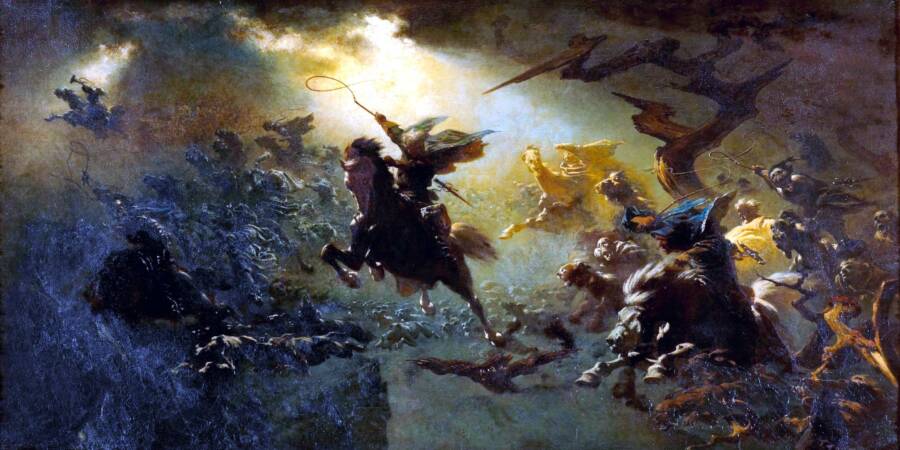 Wikimedia CommonsDuring the mythological Wild Hunt, it was believed that the Norse god Odin led a band of spirits across the winter sky, foreshadowing events ranging from a change in the weather to death and disaster.

For centuries, the only hint at the existence of Yule was in the word itself, suggesting a time of rejoicing and merriment at the darkest point of the year. However, during a revival of interest in all things Viking in the 19th century, the lost traditions of the holiday were rediscovered — and were apparently not so lost, after all.

Indeed, many of the Vikings’ Yuletide traditions are still practiced in some form today on Christmas.

The rites, ceremonies, and festivities of Yule were rife with references to important gods of the old Norse and Germanic pantheons, most significantly Odin, one of whose names was Jólnir, which indicates a connection to the holiday of “Jol” or Yule.

To ancient Vikings and Goths, the period prior to Yule was a time of heightened supernatural activity. Undead creatures called draugr wandered the Earth, magic was more potent, and Odin himself led a ghostly Wild Hunt across the night sky. To appease restless spirits and gods alike, the Vikings held ceremonies that included sacrifices of various plants, animals, and beverages.

The ancient Europeans revered trees in particular and bonfires were lit to ward off the darkness and celebrate the return of the Sun. This particular ritual gradually evolved into the “Yule log,” a specially selected tree that was burned to ensure warmth throughout the longest night of the year.

Similarly, evergreen trees were mounted in the corners of homes and longhouses and were decorated with pieces of food, runes, statues, and strips of cloth. These trees are still erected in the living rooms of modern observers of Christmas.

However, the most disturbing and controversial pagan Yule rituals may have been the sacrifice of animals and humans.

It’s unclear whether human sacrifice really did occur on Yuletide or if this was merely a rumor started by Christians in order to discredit the old religions, but numerous accounts describe the killing of young men in order to atone for the misdeeds of humans on Earth. 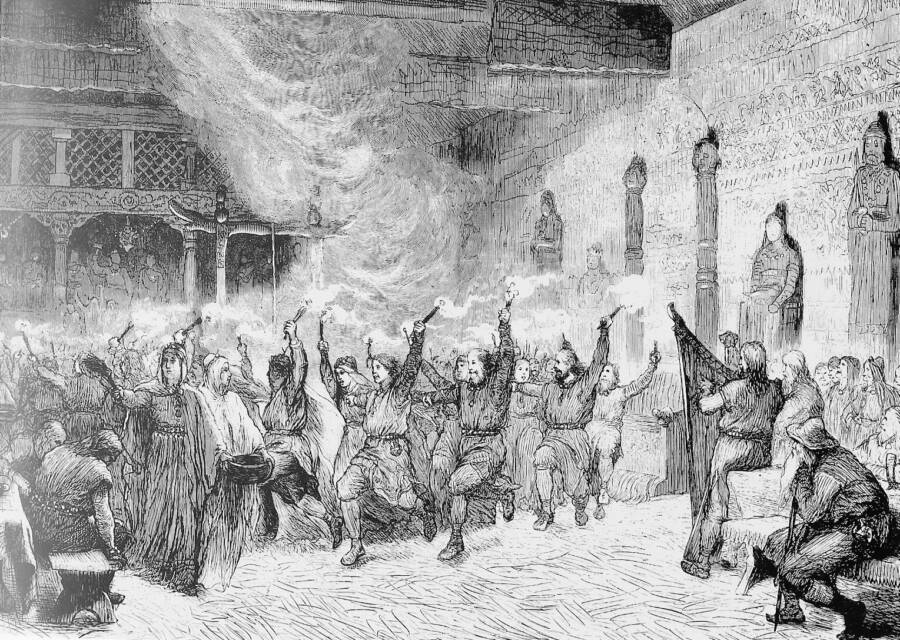 Wikimedia CommonsViking sacrificial ceremonies, called “blóts,” were held throughout the winter to honor the gods, certain spirits, and ancestors.

The Yule festivities may have begun with Mōdraniht, or “mothers’ night,” during which a boar, called a sonargöltr, was sacrificed to the god of virility Freyr and his twin sister Freyja, the goddess of fertility. Before eating the meat, Viking chieftains and warriors would lay their hands on the boar’s bristles and swear drunken oaths to perform deeds ranging from the ridiculous to the heroic to the outright barbaric.

In the epic Old English poem Beowulf, for example, the hero swore to kill the dragon Grendel in a ceremony called heitstrenging, while the noble Harald Fairhair swore not to cut his hair until he united Norway into a single kingdom under his leadership.

Throughout the three to twelve-day celebration of Yule, bundles of grain were shaped into so-called Yule goats, and young men would wassail, or dress in costumes and dance from house to house singing in exchange for drinks and food. 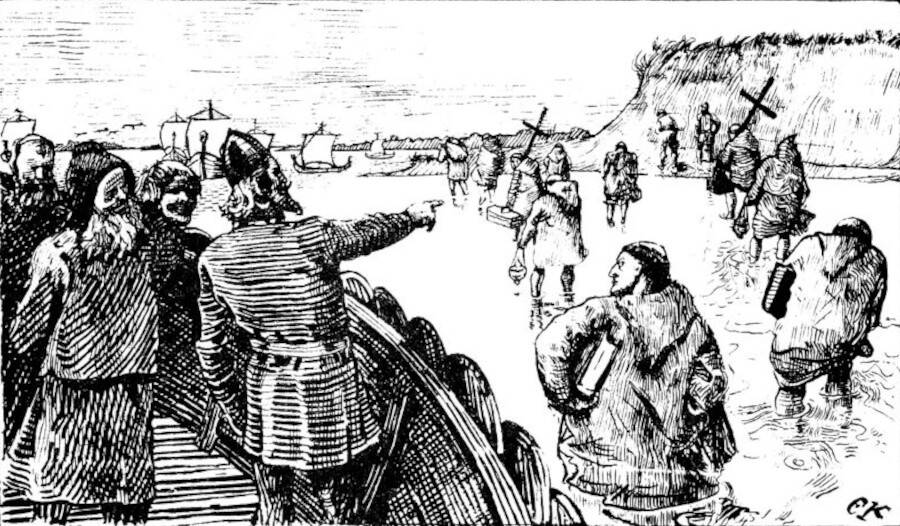 Wikimedia CommonsChristian missionaries made several attempts to convert the Vikings, eventually succeeding by connecting Norse beliefs to Christian ones by rearranging their key holidays to coincide with each other.

As Christian missionaries spread into the pagan heartlands of northern Europe, they encountered these rituals and found themselves presented with a unique challenge. For Christians, the worship of multiple gods was intolerable, yet the prospect of forcing proud and notoriously violent Vikings and Germanic tribes to reject their beliefs must have been just as unappetizing.

Instead, the missionaries fell back on a time-tested Christian compromise called interpretatio christiana, or “Christian interpretation.” By learning the myths and religious beliefs of the Norsemen, they could identify parallels within Catholicism and link these two belief systems together, making conversion more palatable to those reluctant to give up their centuries-old practices.

But while missionaries like Bede were hard at work melding paganism with the Bible, the real work of conversion was political. Perhaps the most important figure in binding Yule to Christmas was the Norwegian king Haakon the Good, who attempted to convert the whole of Norway to Christianity during the 10th century A.D.

Haakon had spent his childhood in England and returned to Norway as a full-fledged Christian intent on spreading his faith. He realized quickly, however, that the conservative chieftains of his kingdom were resistant to the new religion and so he struck a compromise.

According to the saga Heimskringla, Haakon decreed that Yule would be celebrated not on Midwinter Eve, but on the 25th of December, coinciding with Christmas. Under this new law, Norwegian Vikings were required to celebrate either holiday with a supply of ale or else pay substantial fines.

When Haakon was killed in battle, a brief pagan revival took place, but the effects of his law held. From then on, “Yule” and “Christmas” became synonymous throughout Scandinavia, and the traditions were blended together.

The Rebirth Of Yule In The Modern Era 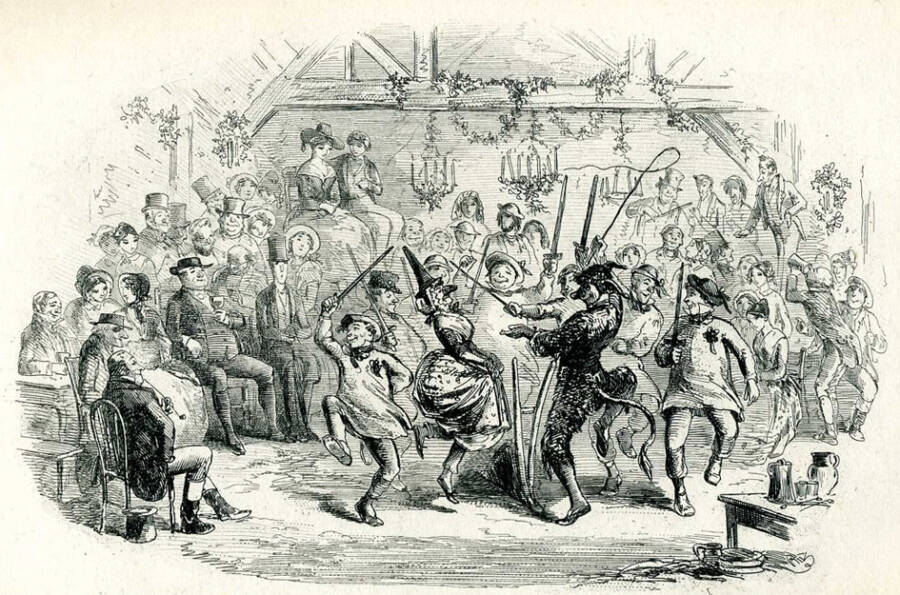 Wikimedia CommonsDuring the Christian holiday of Twelfth Night, revelers enjoyed wassailing, or Yule singing, while dressed in outlandish costumes which may have derived from ancient Viking traditions.

Today, what remains of Yuletide celebrations is the Yule log or Christmas tree, the Christmas ham or Yule boar, and the word “Yule” itself. Many of these traditions were strongest in the former Viking homelands of Sweden, Norway, Iceland, and Denmark, where Yule goats and wassailing carried on long after the disappearance of the old gods.

One god who may not have disappeared, however, was Odin. Instead, some historians posit that the old, white-bearded god on horseback or seated in a cart drawn by reindeer was transformed into Santa Claus, otherwise known as Father Christmas or Saint Nicholas. 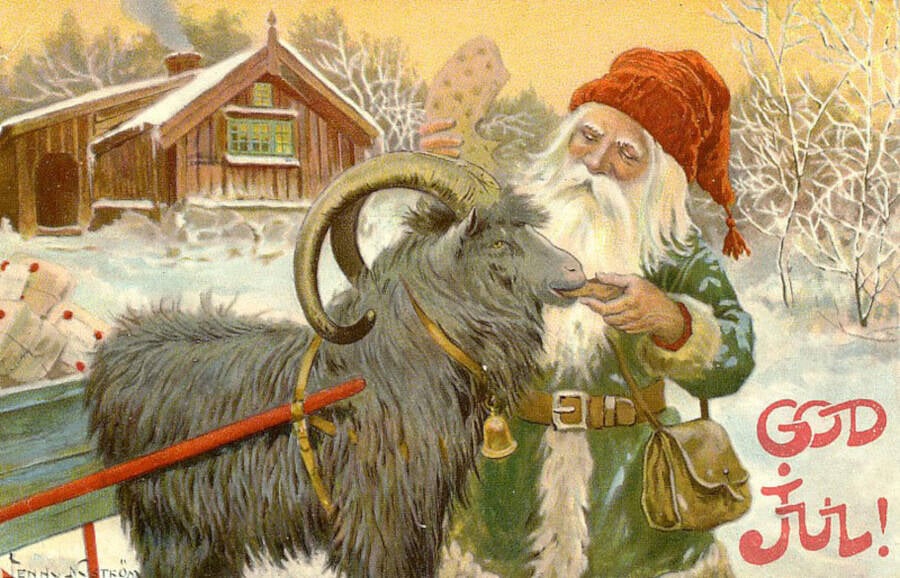 Wikimedia CommonsModern depictions of Santa Claus are believed by some historians to be an invention of Scandinavian artists and authors like Jenny Nyström, who may have drawn on the legacy of Odin for inspiration.

Immigrants from Germany and Scandinavia brought their version of Santa Claus, as well as many of their best-loved Yuletide traditions, with them to the Americas and other parts of the world during the 18th and 19th centuries.

But with the decline of state-enforced Christianity and a renewed interest in pre-modern Europe during the same period, the pagan celebration of Yule was revived. As Neopagan religions like LaVeyan Satanists, Norse revivalists and Wiccans arose in Europe and North America, a new form of Yule was born.

These groups are said to be drawn to the holiday for its celebration of nature, the rhythms and patterns of the seasons and the stars, and its unfathomably ancient roots.

Though scholars admit that the lack of written records and the evolution of cultures through time means that the details of this unique holiday may be lost to history, they nonetheless note how without them the modern Christmas might not exist.

Indeed, no matter how exactly the Vikings celebrated their pre-Christian “Christmas,” the inheritance of their traditions makes the modern holiday all the richer and more fascinating.

After learning about Yule, the Viking Christmas, find out more about the surprising origins of the beloved Christmas tree. Then, learn about the gods the Vikings prayed to in the centuries before Christianity reached their shores.