The Enduring Mystery Of The 1994 Lake Michigan UFO Incident

On March 8, 1994, hundreds of people called 911 to report eerie lights above Lake Michigan — but their true origin remains unknown to this day.

On March 8, 1994, residents living along the shore of Lake Michigan witnessed one of the most widespread UFO sightings in history. Bright, multi-colored orbs appeared over the water and could be seen as far south as the Indiana state line, dancing erratically across the night sky.

Local police were overwhelmed with people calling in to report the flying objects. In total, dispatchers received over 300 calls from concerned citizens. The National Weather Service (NWS) later confirmed the presence of large objects in the sky over the lake — objects they were certain were not planes.

Then, they were gone. Vanished without a trace. 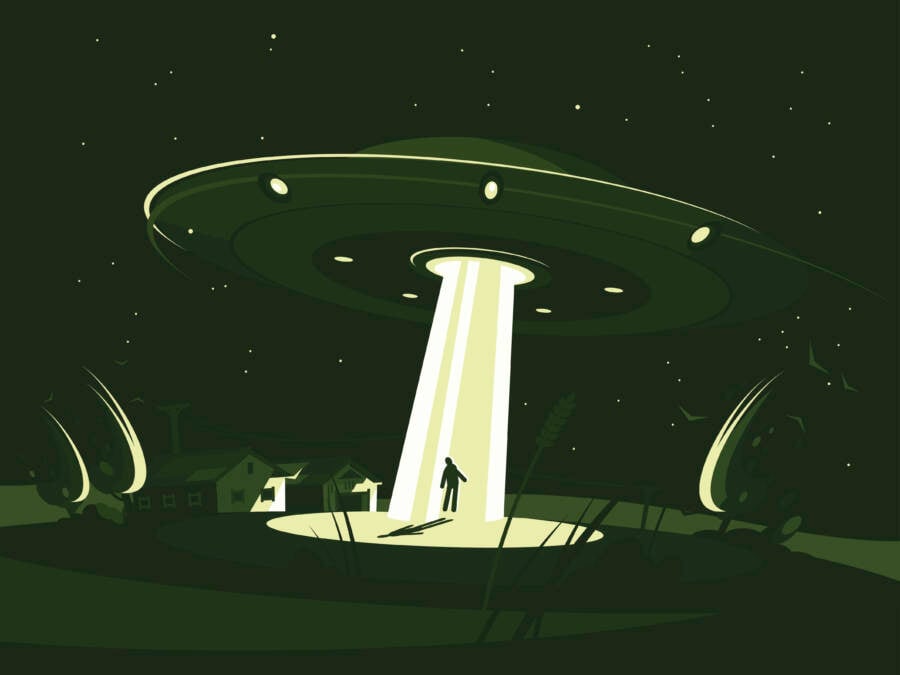 Vector Illustration by Getty ImagesAlso known as the Lakeshore Event, the 1994 Lake Michigan UFO incident is one of the most compelling sightings of all time.

However, despite dozens of witness interviews, no explanation has ever been given regarding the lights — which are now the subject of an episode of Netflix’s Unsolved Mysteries.

So, what really happened that night in 1994?

Inside The 1994 Lake Michigan UFO Incident

“I got UFOs in my backyard,” Cindy Pravda of Grand Haven, Michigan told a friend over the phone on March 8, 1994.

According to the Detroit Free Press, Pravda was one of the hundreds of people who saw the collection of five or six glowing orbs above Lake Michigan. More than two decades after the event, she still remembered it clearly.

“I watched them for half an hour,” she said. “Where I’m facing them, the one on the far left moved off. It moved to the highway and then came back in the same position. The one to the right was gone in the blink of an eye and then, eventually, everything disappeared quickly.” 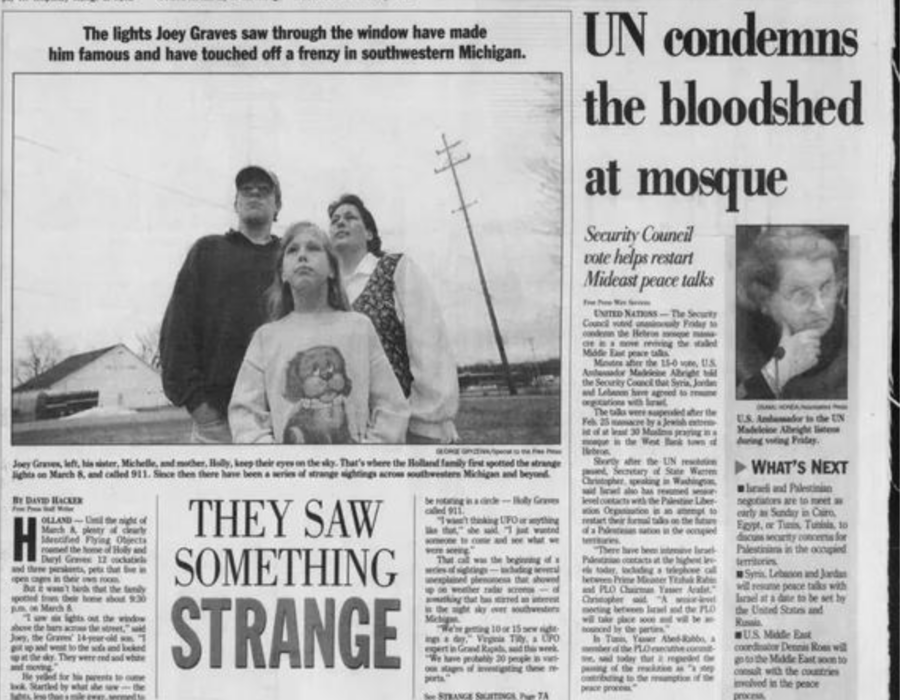 It wasn’t only residents of Grand Haven who saw the lights, either.

Similar accounts were given by people in Holland, 22 miles away. Among the Holland witnesses were Daryl and Holly Graves and their son, Joey.

“I saw six lights out the window above the barn across the street,” Joey said. “I got up and went to the sofa and looked up at the sky. They were red and white and moving.”

Sightings were reported from Ludington, Michigan all the way down to the Indiana state line, 200 miles away. Calls were coming in not only to the police, but also to the Michigan chapter of the Mutual UFO Network (MUFON), a volunteer nonprofit founded in 1969 that claims to be “the world’s oldest and largest civilian UFO investigation and research organization.”

While it is certainly strange for such a large number of people to report the same phenomenon, perhaps the most compelling evidence regarding the Lake Michigan UFO event came from the observations of a radar operator for the National Weather Service.

The Mysterious Objects Caught On Radar Over Lake Michigan 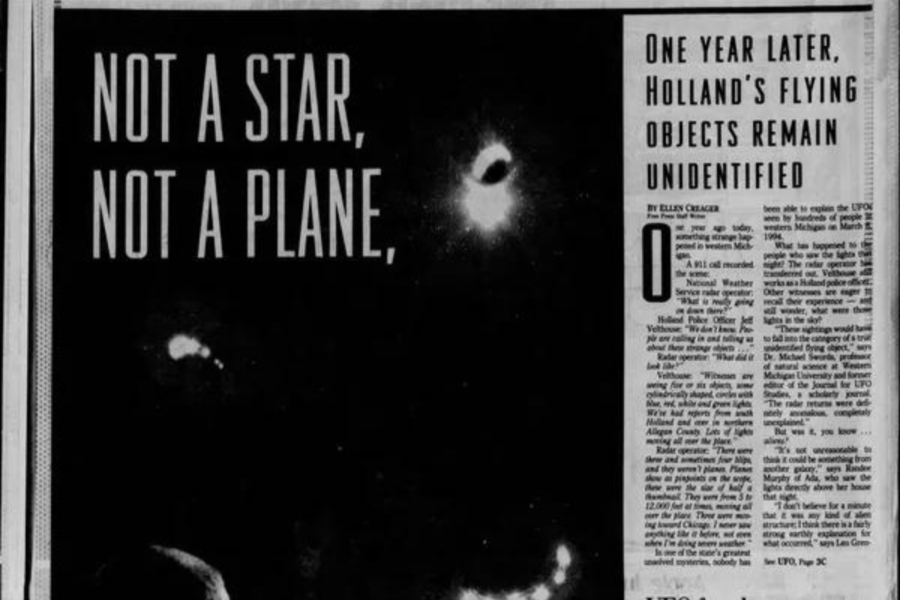 The Detroit Free PressOne year after the Lakeshore Event, more information and released recordings offered even further credibility to the UFO incident.

According to The Debrief, after seeing the lights for himself, Velthouse called a meteorologist named Jack Bushong, who was stationed at the NWS office in Muskegon County.

Their conversation was published a year after the event, and it has been made publicly available by MUFON in the years since, along with numerous calls from witnesses.

Throughout the call, Bushong and Velthouse discussed other mundane explanations for the unidentified objects, including a nearby radio tower with newly-installed lights. As the call went on, however, Bushong became increasingly excited as he tried to describe the “instantaneous movements” of the cylindrical objects he saw.

At one point in the call, Bushong confirmed that he saw “three and sometimes four blips” on the radar, “and they weren’t planes.”

“Planes show as pinpoints on the scope,” he said. “These were the size of half a thumbnail. They were from five to 12,000 feet at times, moving all over the place. Three were moving toward Chicago. I never saw anything like it before, not even when I’m doing severe weather.”

Bushong later revealed that when he found out his phone call with Velthouse had been recorded, he was terrified that people would think he’d lost his mind.

“Just that people think you’re a kook,” he said to Wood TV, “or you’re lying, you’re not credible. I’m supposed to be a scientist and skeptical.”

But there was no simple explanation for what Bushong had seen. He went down the line of technical glitches and weather phenomena, yet nothing lined up with what he was seeing on his screen.

As he described it, the solid objects were seemingly “coming together and coming apart… moving about 20 miles in each jump. They were hovering, then jumping. Hovering and jumping.”

It appeared to him as if the objects were forming a wide triangle spreading out over Lake Michigan.

Still, despite everything he saw, Bushong waited over two decades to speak out, fearing that he might lose his job. He only spoke about it again after the U.S. government released a report confirming that military pilots have indeed seen unidentified flying objects.

“I guess I’ve been waiting for this vindication,” Bushong said, “which I didn’t think I was going to get all my life.”

What Really Happened During The Lake Michigan UFO Incident?

The Lakeshore Event is one of the most well-documented and compelling examples of UFO activity, but as for whether or not it proves that extraterrestrial aliens have visited planet Earth, the jury is still out.

Years after the event, Bushong spoke to WWMT and revealed even more information about what he saw on the radar screen that night in 1994. 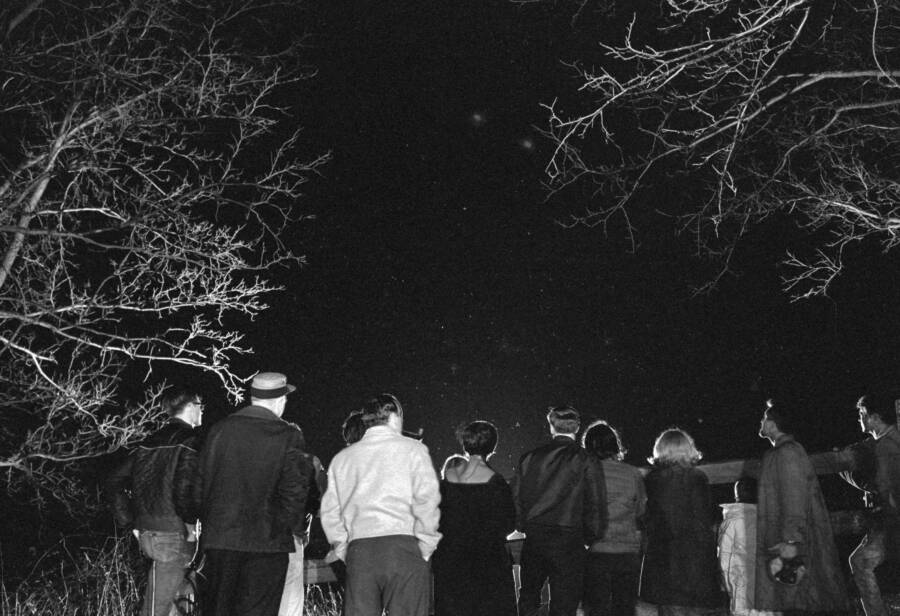 Bettmann/Getty ImagesCitizens turned out to observe the night sky in search of UFOs well before the 1994 Lakeshore Event. Reports of UFOs dominated the southern Michigan airwaves in 1966.

At their highest, Bushong said, the objects reached 60,000 feet and continued to move in odd patterns until they reached the south end of Lake Michigan. There, he observed about a dozen similar objects, which were mostly stationary for two hours.

“NWS didn’t want to become the UFO reporting center for the United States, so that’s really why they… had to duck and cover for this one,” he later said.

Bushong faced ridicule for years after the incident, but given the recent report from the United States government regarding the existence of UFOs, his account has gained some more credibility.

Unfortunately, there are still more questions than answers regarding the Lake Michigan UFO event of 1994 — and the mysteries surrounding it may never be solved.

After this look at the 1994 Lake Michigan UFO Incident, read about other famous UFO encounters like the Roswell Incident and the Calvine photo.