An ‘Alien’ Saucer, A Coverup, And A Secret Government Test: The Truth Behind The Roswell Incident Of 1947

In July 1947, something crashed on the Foster Ranch in New Mexico. What that object was, what the government said it was, and what the public thought it could be has created a near-mythical confusion that has lasted ever since.

In the summer of 1947, something crashed on the Foster Ranch in south-central New Mexico. The site was about 30 miles southeast of the small town of Corona, but it was 75 miles northwest of the larger town that gave this event its name: the Roswell incident.

What that object was, what the government said it was, and what the public thought it could be has created a near-mythical confusion that has now lasted for the better part of a century. 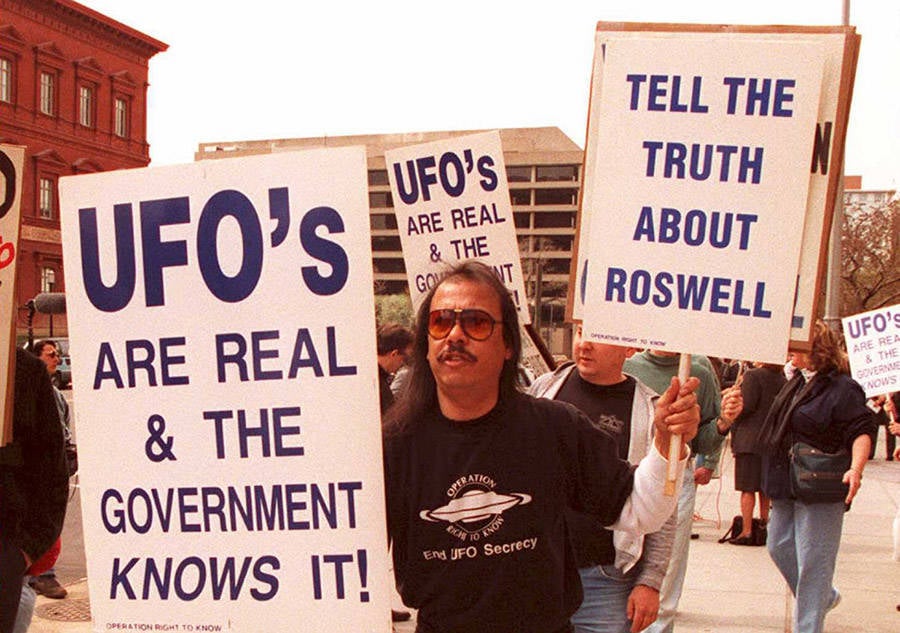 JOSHUA ROBERTS/AFP/Getty ImagesA group of protestors march in front of the General Accounting Office (GAO) to raise awarness about an examination being conducted by the GAO for documents about a weather balloon crash at Roswell, New Mexico in March 1947.

The Roswell crash happened to occur right at the beginning of what would be the American public’s UFO craze. So perhaps it was inevitable that the debris collected from the New Mexico site would come to be associated with alien life and contact from another world.

This idea is so magnetic that even today around half the population of the United States believes aliens have visited Earth at least once — and Roswell is Ground Zero for that belief.

Shrouded in mystery and intrigue, the Roswell Incident garnered renewed attention in 2016 when candidate Hillary Clinton made releasing the government’s files on the incident a campaign promise.

So what really happened at that ranch in New Mexico in 1947? Turns out, it might be stranger than the fiction surrounding it.

The Events Leading Up To The Roswell Incident

To understand how the Roswell incident blew up the way that it did, it helps to have some context regarding other events going on in America at the time of the mysterious crash.

In 1947, the United States had recently emerged victorious from World War II, a war that was to a great extent fought in the sky with (at the time) advanced technology. Early rockets had made news and jet aircraft were making test flights all over the American Southwest. Add to that the sudden appearance of the atomic bomb — a product of super-secret government research — and the mysterious air it gave the area around Alamogordo, which is just a few miles west of Corona.

Of more immediate notice was the 1947 Kenneth Arnold UFO sighting. This was the first close encounter to make the news as contact with unknown flying objects.

Arnold, a pilot, described the objects as white spheres that skipped “like flying saucers” through the air. Mishearing what Arnold said about his sighting, story-hungry reporters took the flying saucer angle and ran with it in their stories as a gag.

The Arnold sighting took place less than two weeks before the Roswell incident, which was close enough for “flying saucers” to be fresh in people’s minds, but long enough for local papers to need a new story.

Then, something went down at the nearby Foster Ranch.

Details Of The New Mexico Crash 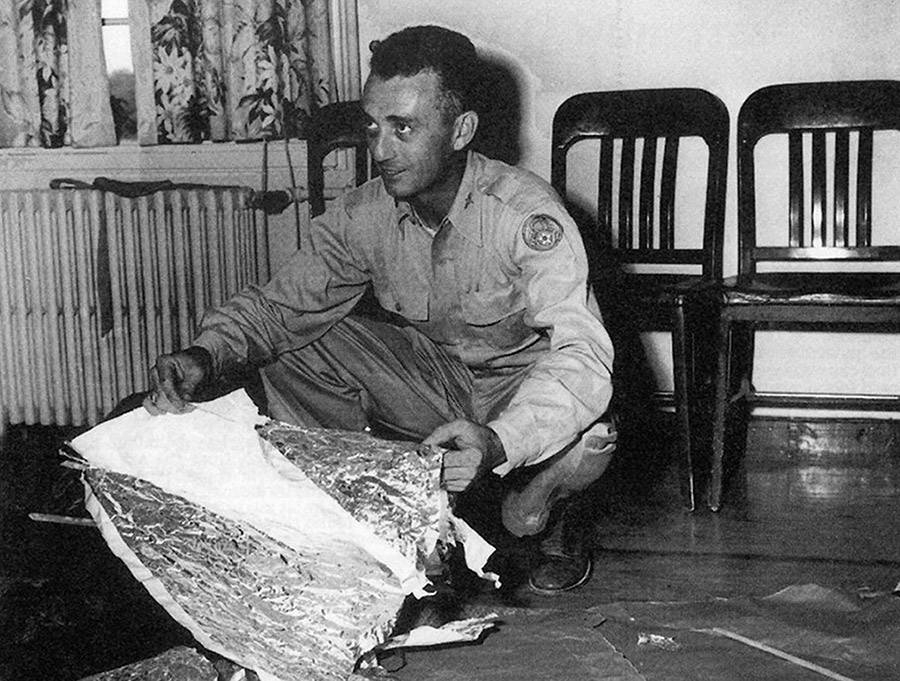 Universal History Archive/UIG/Getty ImagesJesse Marcel, head intelligence officer, who initially investigated the Roswell incident and recovered some of the debris from the crash site in 1947.

On the morning of July 3, 1947, rancher Mac Brazel found some debris scattered over about 200 square yards near a service road on the ranch where he worked. Later reports became muddled, but his first description to the press was of finding strips of papery material that were covered with shiny foil. He also said he found broken strips of lightweight wood and plastic, some of which had odd symbols on it, and spongy bits of rubber.

He described the foil as having small metal grommets embedded in it as if a cord had once to pass through them. He specifically described finding sticks to the reporter for the Roswell Daily Record who came to take his story, and he described the debris as resembling a broken kite. 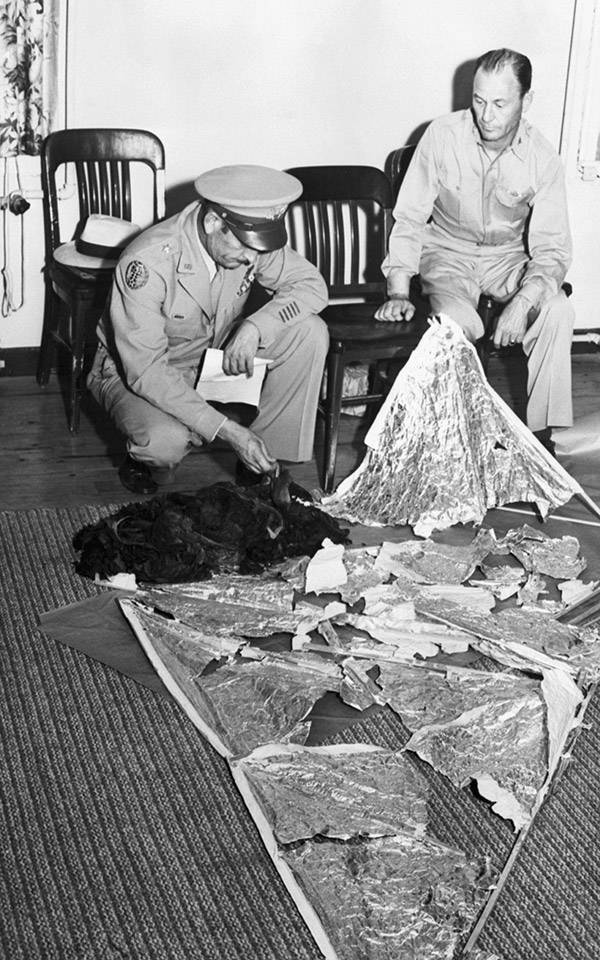 Brazel’s first impulse was to stick the debris under some brush and leave it there.

But, a little while later, after hearing about the Arnold sighting, he told the local sheriff what he’d found and suggested it might be a flying saucer. The sheriff, a man named Wilcox, reached out to report the debris to the Air Force, which he knew was operating out of Holloman and White Sands bases, both of which were near the ranch where the material was found.

An Air Force officer came out to meet with Brazel, who led him to the site and helped him collect most of the debris. Word got out to the local press a short time later, and the flying saucer-fueled interest made itself felt in the now-immortal headline: “RAAF Captures Flying Saucer on Ranch in Roswell Region.”

The Top-Secret Program Behind The Incident 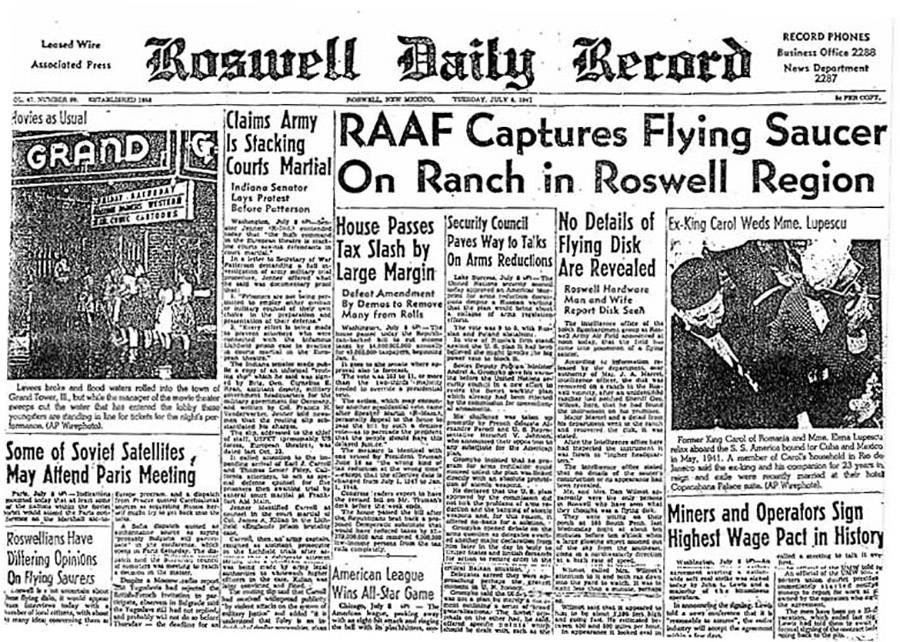 Fake news wasn’t entirely to blame for the misreporting of the Roswell crash. Almost all of the early reports of the Roswell incident were based on the July 8 press release that the Roswell Army Air Field (RAAF) published, claiming a flying disc had been captured on a ranch in Roswell.

Exactly why the Air Force felt the need to make this claim is not clear, though the local 509th Bomb Group’s Intelligence Office was certainly interested in covering up what the material had really been part of.

It’s possible an overly creative press agent for the Air Force had simply grabbed a headline that had been floating around and spun it into a fun diversion from what really was a classified program nobody was supposed to know about.

That program, as we now know, was Project Mogul, a then-Top Secret operation to test A-bomb detection hardware that was intended to be deployed near the Soviet Union. Mogul used commercially available weather balloons to heft a five-pound “kite” made of balsa wood, plastic, and mylar, up to an altitude of about 28,000 feet.

There, the balloon would carry a microphone and drift at a stable altitude hoping to hear the rumble of an atomic bomb going off. The foil was part of a radar reflector that helped the base track the probe, while the “strange hieroglyphs” were minimalist floral patterns printed on the struts and some of the cellophane tape by the manufacturer — a party supply company.

How A UFO Story Became A Coverup

Given the top-secret nature of the experiment, the Roswell incident had to remain concealed. This was due in part to a general keep-it-from-the-Soviets attitude that permeated everything the military touched in the Cold War era.

Second, the project itself was part of a larger technical spying effort to spot the first Soviet bomb test. If the Soviets found out what Mogul was, they could have made it harder to hear the bomb they wound up testing in 1949.

Another reason for secrecy was the then-advanced technology project balloons used to maintain their altitude, which was quite a trick for a craft with no propellers or control surfaces.

All of this may have driven the press office to release the bogus “flying disc” narrative, which seems to have been a local decision. Upon sober reflection a few days later, the official lie became the now-infamous “weather balloon.”

Instinctive dishonesty like this has a price. After an initial period when the weather balloon story was accepted by the public, interest in the Roswell incident picked up again after multiple documented instances were made public of the government outright lying about its activities. 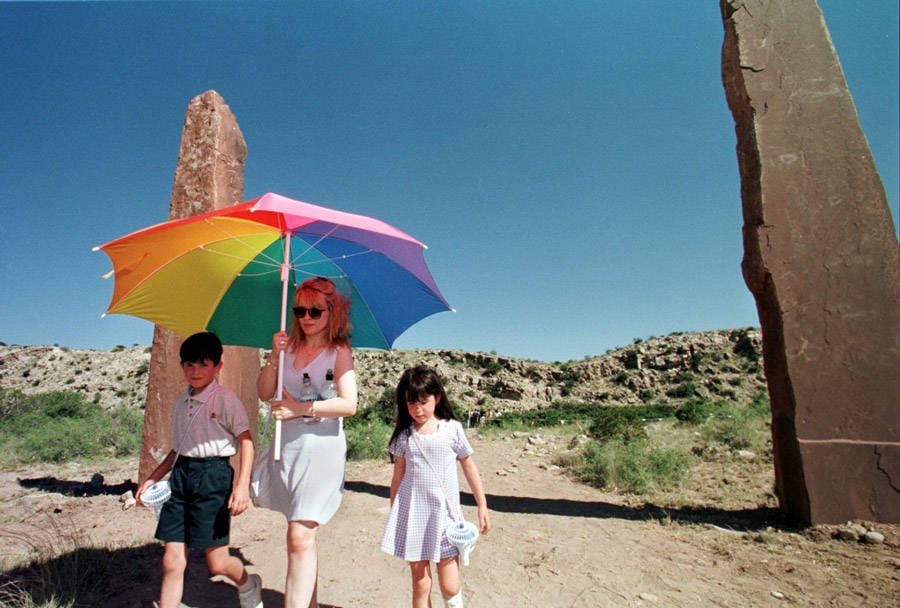 By the late 1970s and early 1980s, the American public had been through the proverbial wringer with covert government projects.

From the Watergate scandal to the Church Committee’s revelations about the multiple times the CIA tried to overthrow governments and kill Fidel Castro, the country was ready to believe almost anything with regard to the government’s skullduggery.

To add fuel to the fire, movies like Close Encounters of the Third Kind, which was all about the government trying to cover up alien visitations, were massive hits and often extended the public’s fascination with the other-worldly.

Eventually, a cohesive narrative of the Roswell incident as a coverup for an actual alien encounter emerged via a cultural game of telephone.

The Legacy Of The Roswell Incident Today 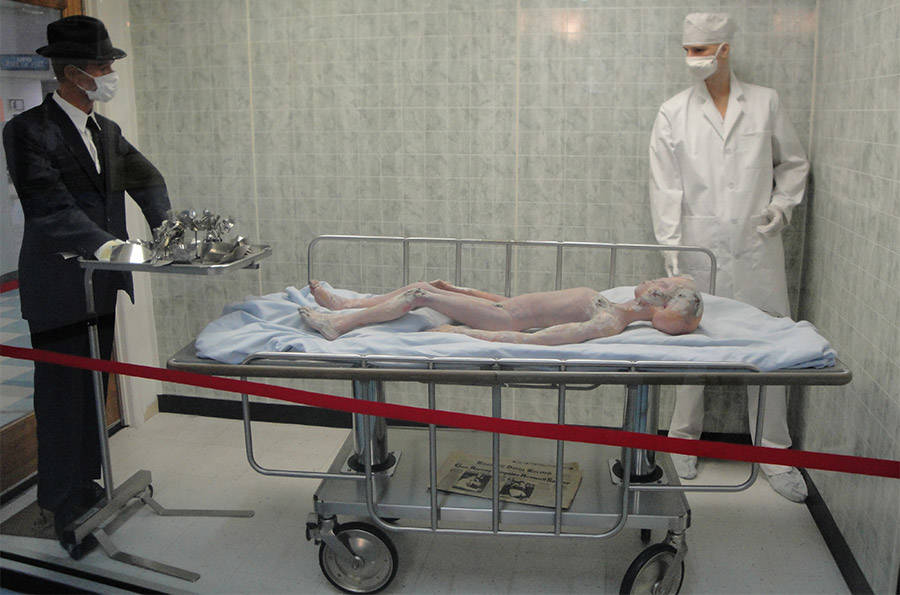 A full 30 years after the incident, those early reports of a flying disc, followed by hasty denials and an obvious coverup, proved too much to resist for authors Kevin D. Randle and Donald R. Schmitt. Their book titled UFO Crash at Roswell interviewed hundreds of people between 1978 and 1980 on the incident and helped spread the UFO craze out of Roswell.

During their interviews, Randle and Schmitt were introduced to a bizarre theory that alien bodies were found at the Roswell crash site. Nobody seems to know exactly who was the first to have claimed they saw dead and dying aliens there, but by the time the Roswell story got wide traction in the 1980s, it was an indispensable part of the mystery.

One person even claimed to have been with Mac Brazel on his first trip out to the Roswell crash site, where he said he saw a living alien walking around among its dead shipmates. Around the same time, in the mid-1990s, documents purporting to be classified blueprints for the UFO were “leaked” to the National Enquirer.

Sadly, none of the allegedly “official” descriptions of this advanced technology revealed anything a collegiate engineer wouldn’t already have known about a power supply, propulsion, and life support systems.

It goes without saying that the military vehemently denied the report, anyway. Yet when they finally declassified the details of Project Mogul, few people were ready to believe that the incident had nothing to do with aliens.

The story of the Roswell incident is a lot of things. In reality, it’s a pretty neat glimpse at the sort of secret projects the tech wizards of the Air Force were into in the years between World War II and the Korean War. In legend, it’s a spooky story about alien life and government cover ups.

In delusion, it’s part of an ongoing project to keep the truth away from the American public. And perhaps, in a way, the fantastical stories about alien invaders, secret bases, shadowy conspiracies, and malevolent forces inside the government are a painless way for people to start talking about the very real corruption and culture of secrecy that does exist in the deep state.

Enjoyed this look inside the Roswell incident? Learn about the bizarre beliefs of Raelism, the religion that says humanity is an alien experiment. Then, read about 9 alien abduction stories that appear to be eerily true.