With depths of more than a mile, the 25-million-year-old Lake Baikal is the most voluminous freshwater lake on the planet — and it’s home to a variety of unique and mysterious creatures.

Located in Siberia, Lake Baikal is natural wonder known for its crystalline-colored waters. It is the largest freshwater lake on the planet by volume, containing approximately 20 percent of the Earth’s freshwater, and it is the oldest lake in the world at about 25 million years old.

Lake Baikal is considered one of the clearest bodies of water on Earth because when it freezes during the winter, large shards of transparent ice form on its surface, making it appear turquoise.

Tragically, the majesty of this lake is threatened by climate change and overfishing. 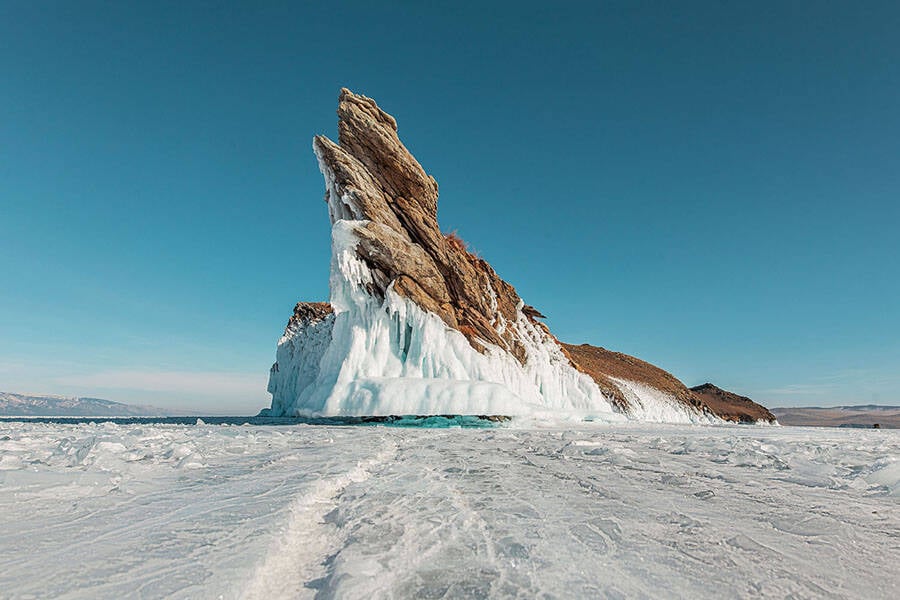 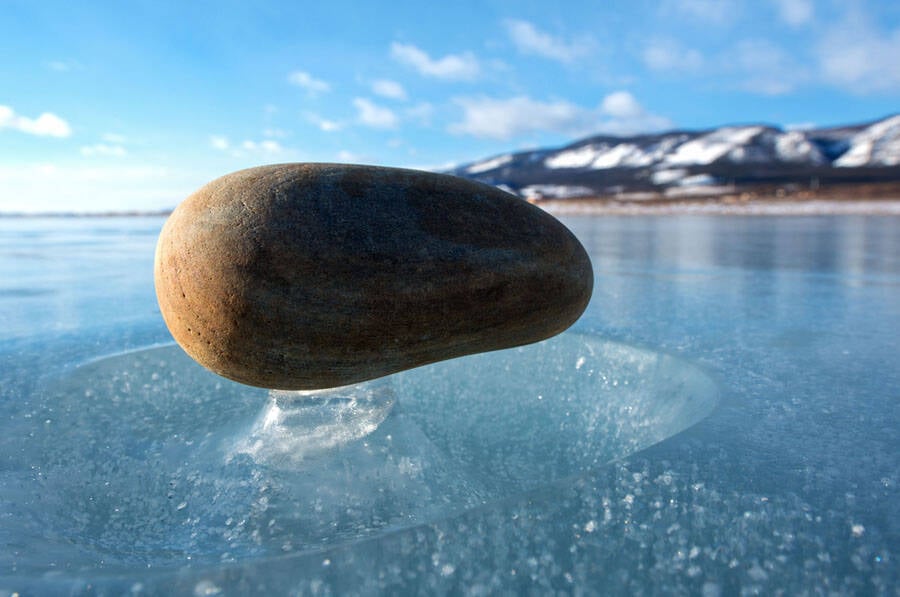 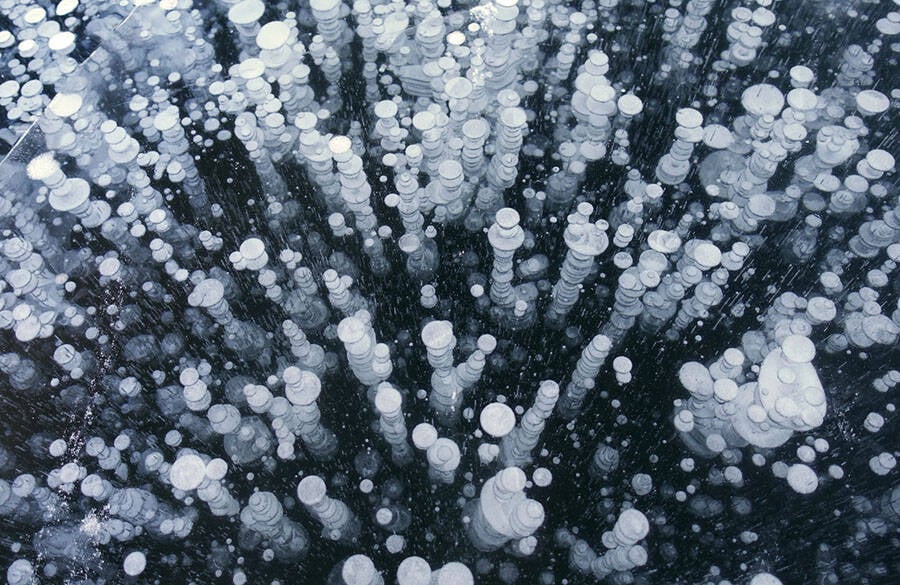 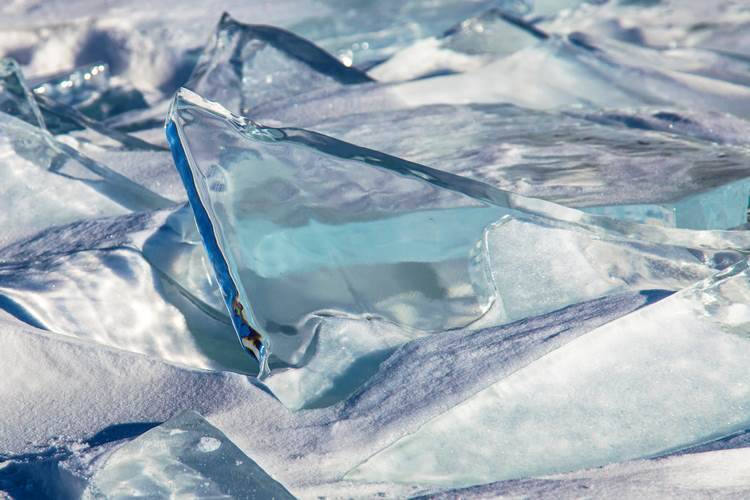 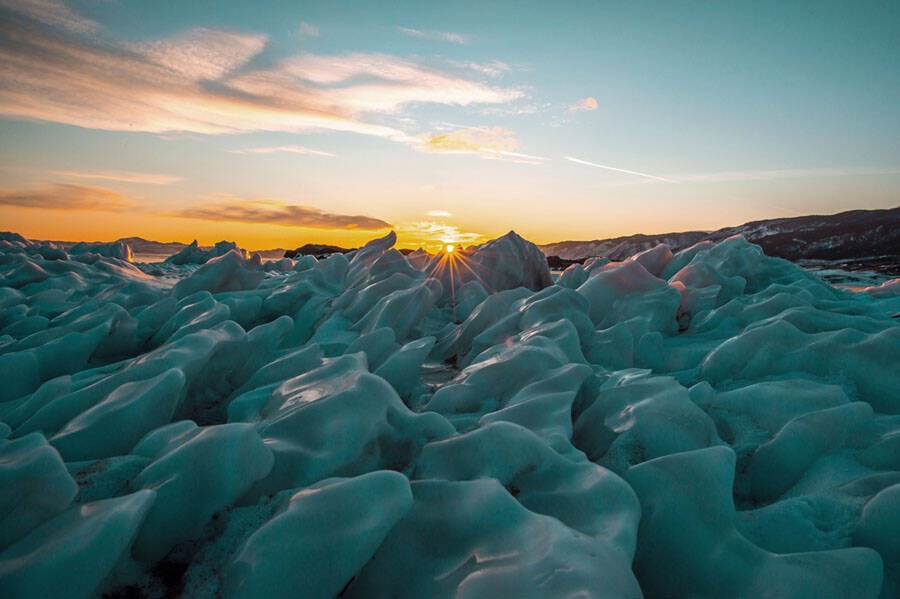 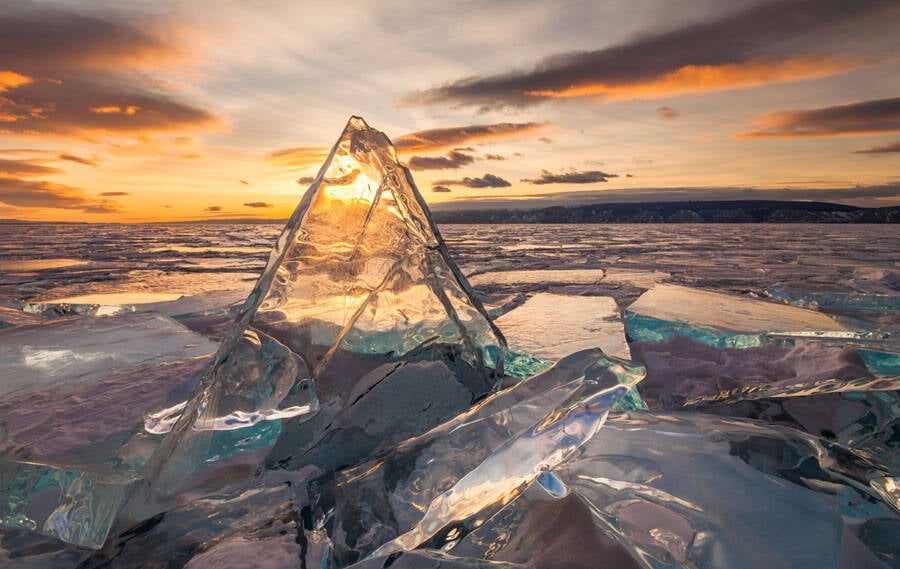 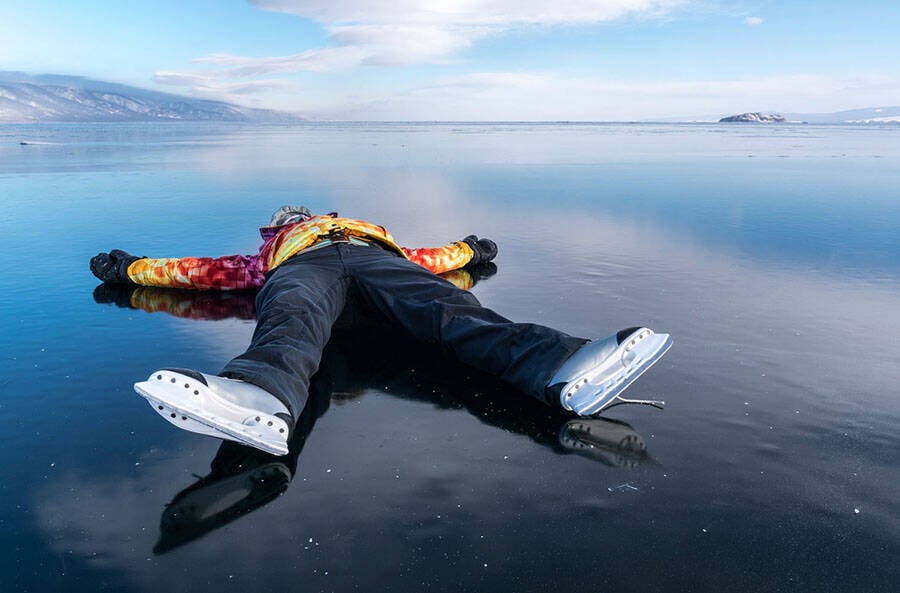 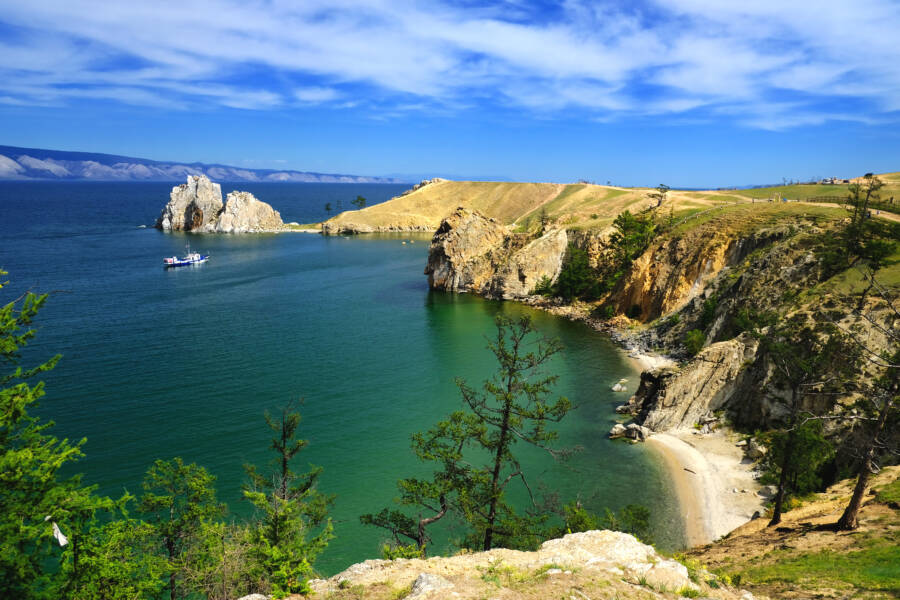 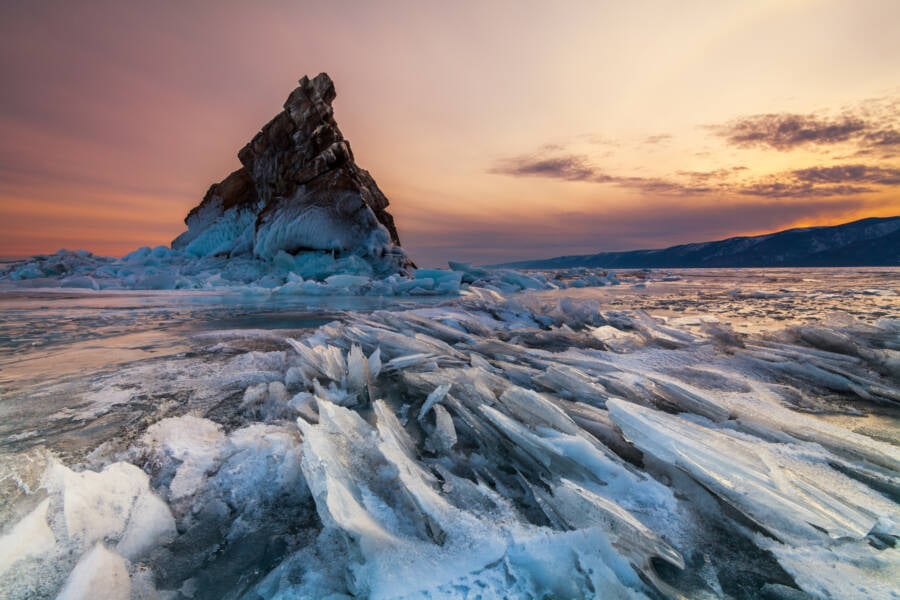 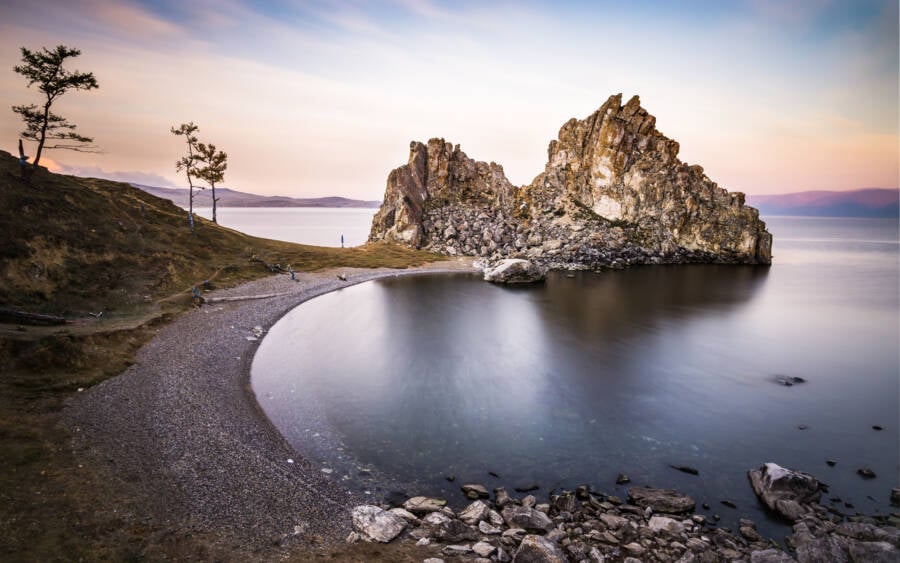 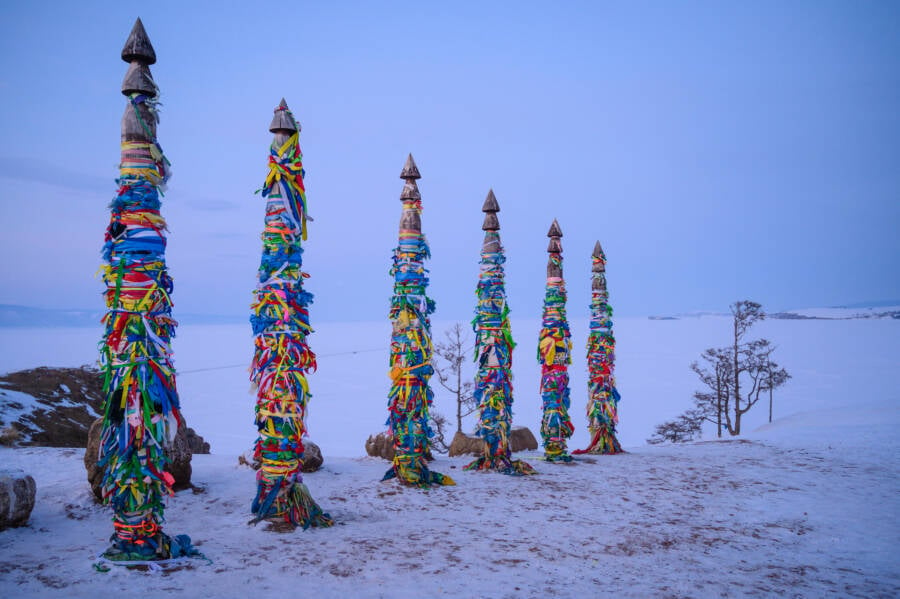 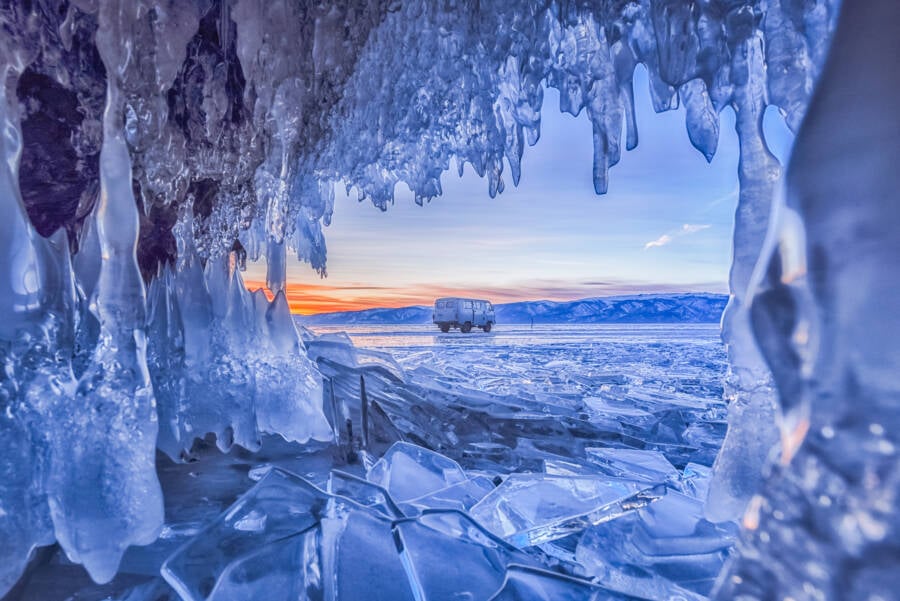 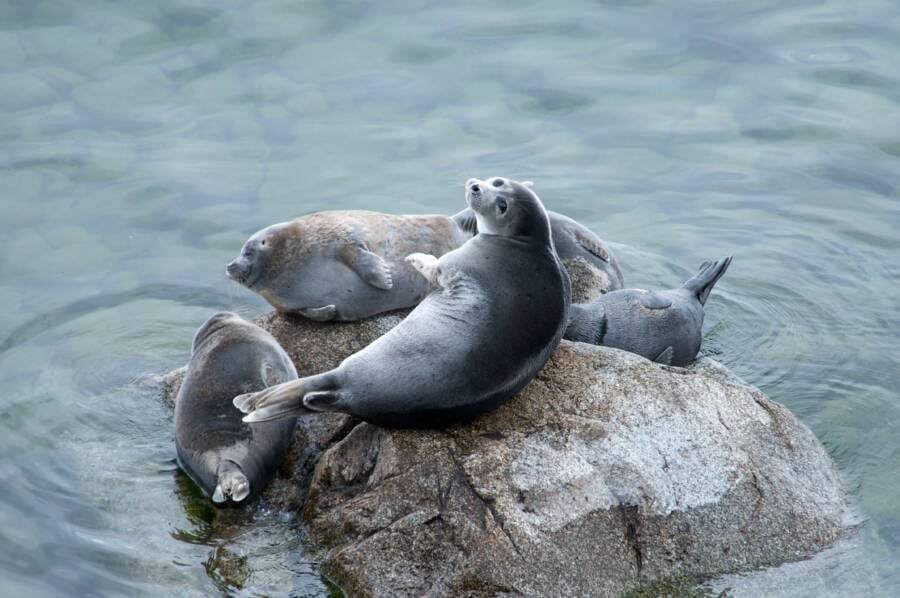 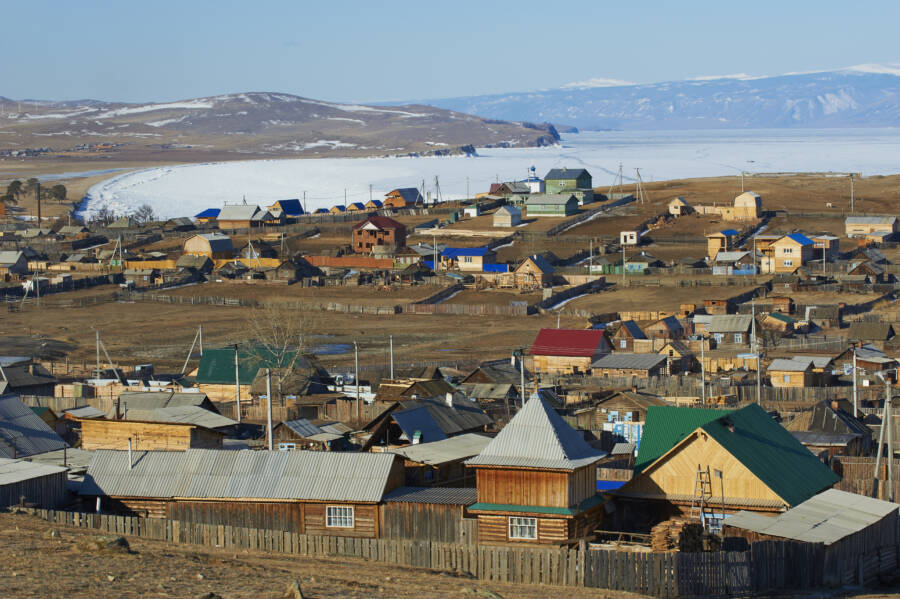 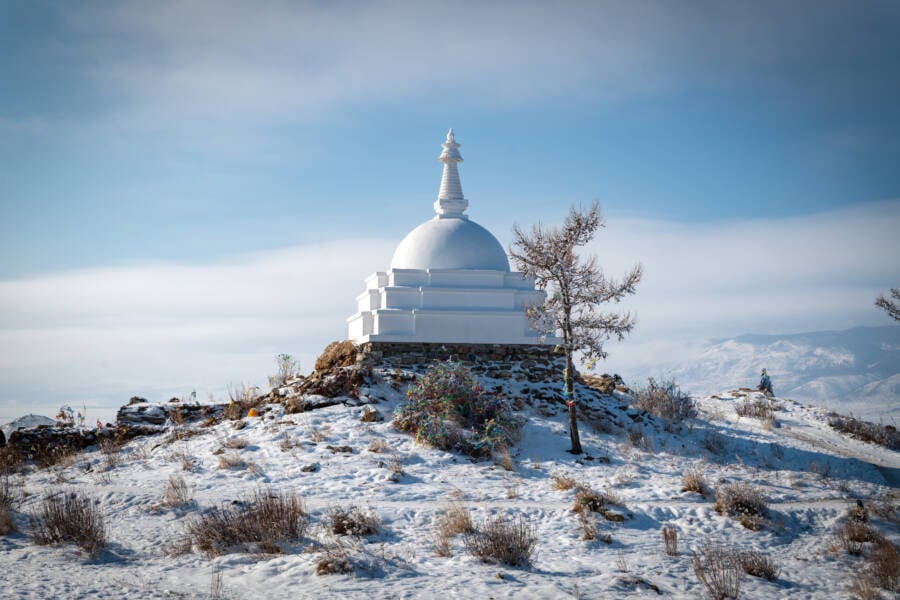 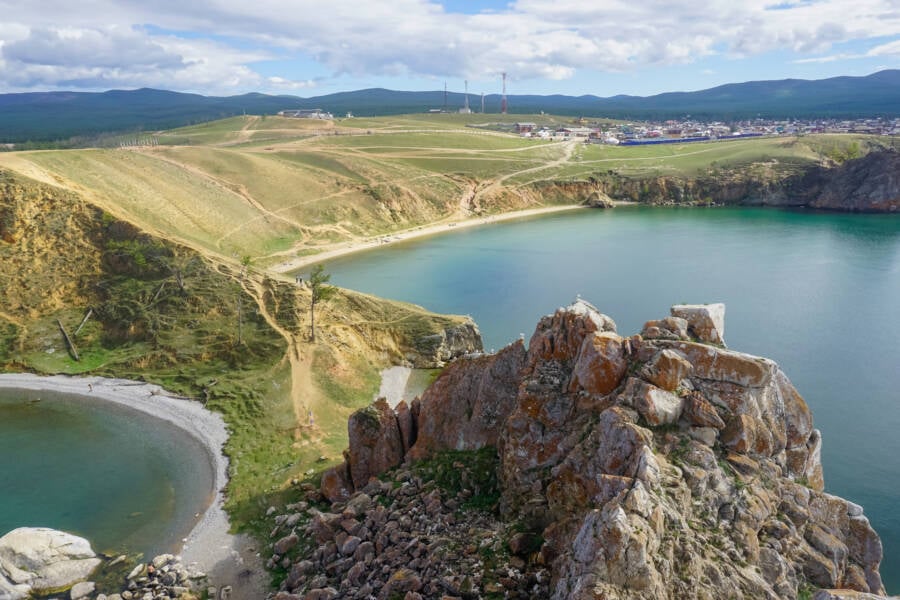 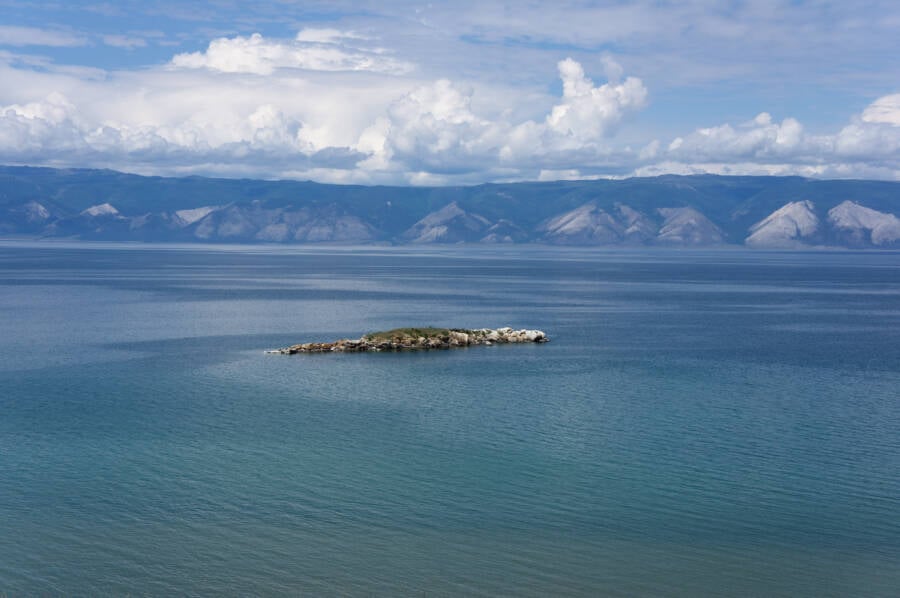 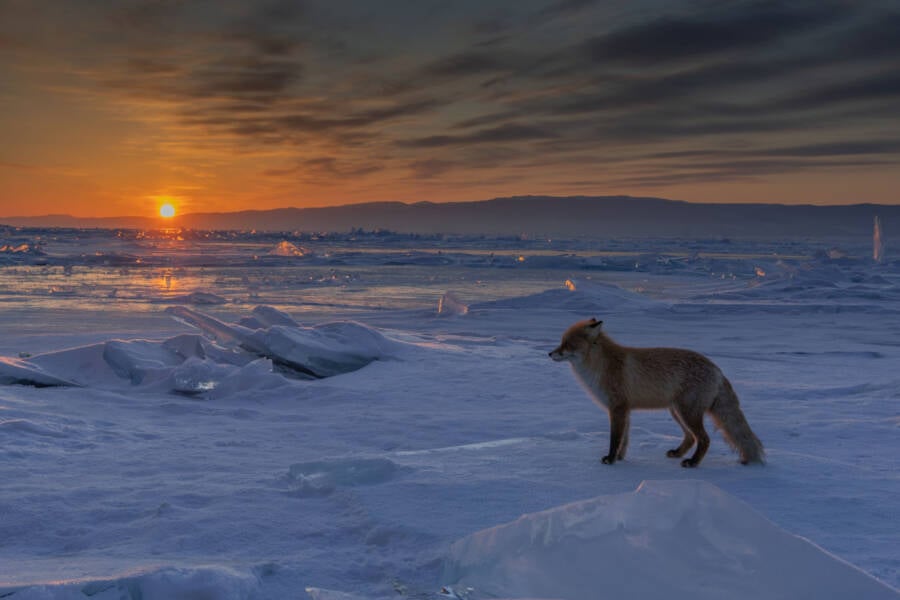 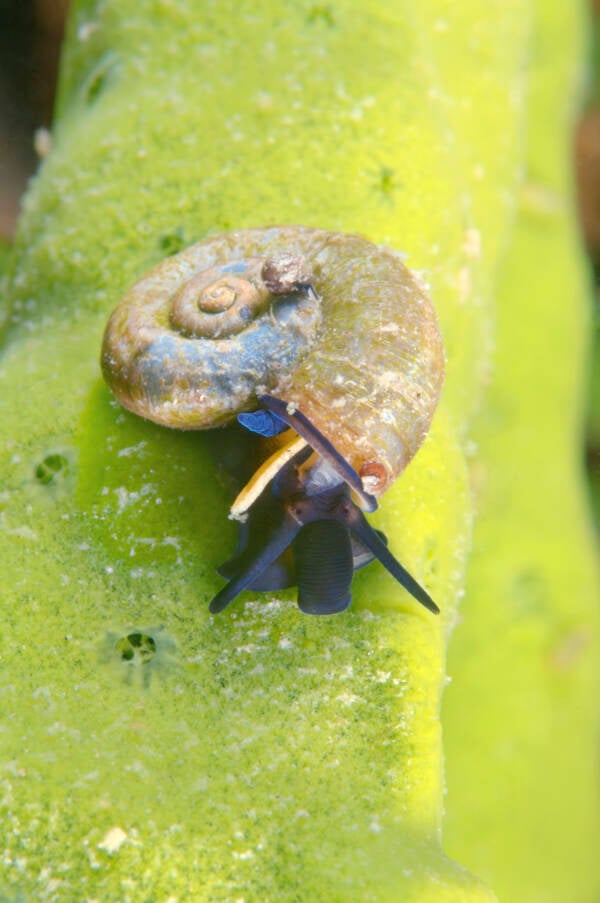 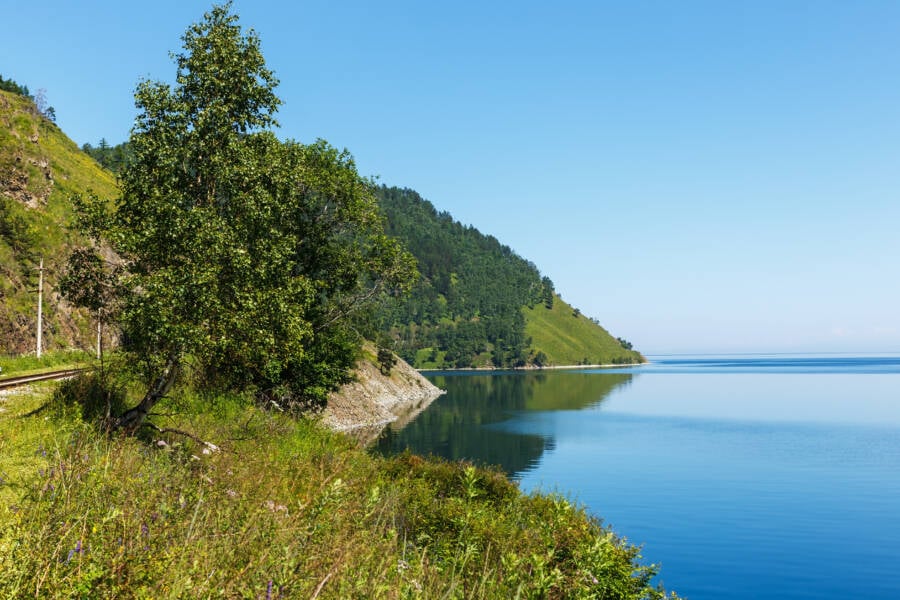 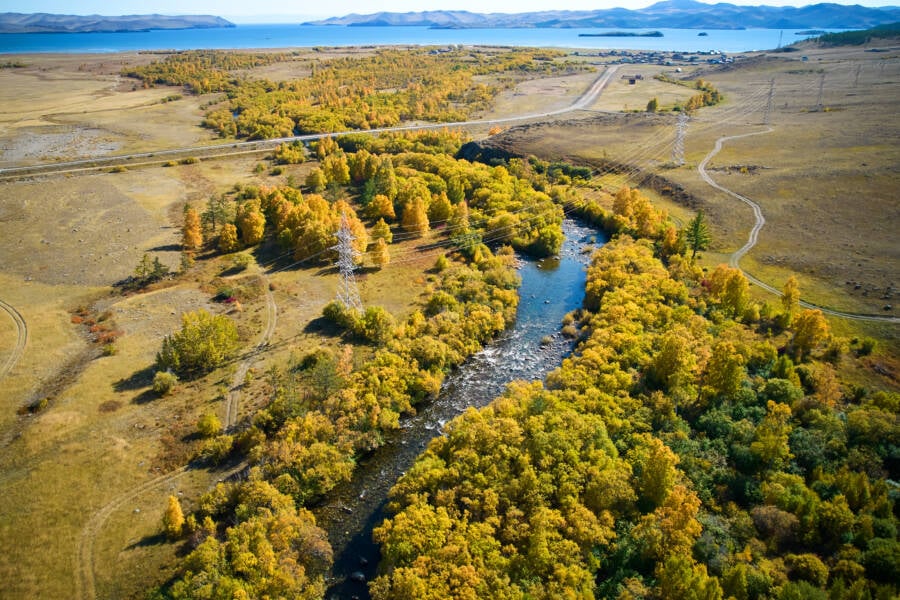 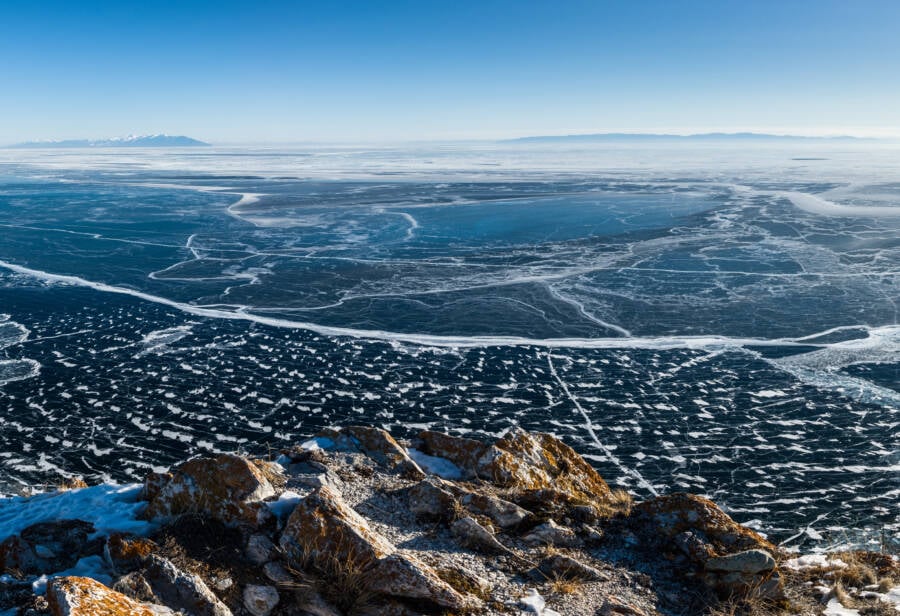 The Incredible Size And Structure Of Lake Baikal

Situated in southern Siberia, Lake Baikal is larger than the country of Belgium at 12,248 square miles wide and is larger by volume than all of the Great Lakes in America combined. Additionally, it is the world's deepest freshwater lake at approximately 5,249 feet.

While it is difficult to pinpoint exactly how old Lake Baikal is, scientists agree that it is likely at least 25 million years old, if not older. Categorized as a "rift valley," the lake was formed when the Siberian platform and the Amurian/North China plate shifted away from one another, forming a body of water between them.

Incredibly, Lake Baikal's geological activity continues to this day, resulting in roughly 2,000 mini earthquakes — or tremors — per year. Its constantly shifting structure also causes the lake to grow more than half an inch wider annually. 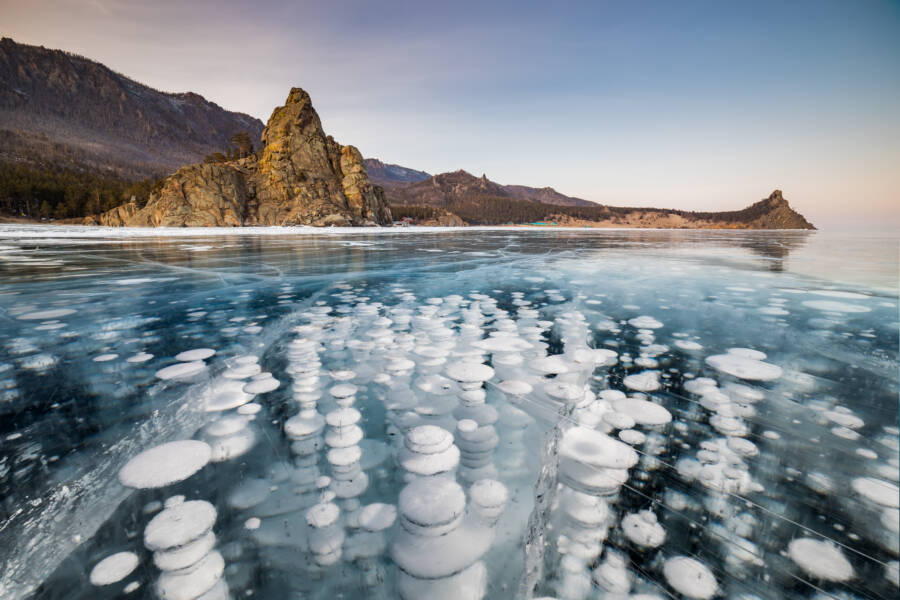 Getty ImagesFrozen bubbles on the lake, which is famous for its underwater hydrothermal vents.

Surrounded by thick, mountainous, subarctic forests, Lake Baikal is so biodiverse that it has been referred to as "the Galapagos of Russia." Out of the 2,000 species of flora and fauna that inhabit Baikal, almost half of them are endemic to the lake.

Among them is the adorable Nerpa or Baikal seal, the only exclusively fresh water seal species in the world. Scientists are bewildered by this species considering the fact that the lake is landlocked and located miles away from the ocean. And yet, an estimated 100,000 Nerpa seals call Lake Baikal home.

Scientists in part owe the lake's thriving marine life to the hydrothermal vents inside it that bring rich minerals from deep inside the Earth. Hydrothermal vents, however, are typically found under the ocean — which makes Lake Baikal one of the only lakes in the world with this natural feature.

Furthermore, the lake also boasts high-levels of oxygen, which helps microorganisms to filter the water and keep it pristine. This abundance of oxygen also helps wildlife flourish.

Because of its age and biodiversity, Lake Baikal has been useful to scientists studying ancient flora and fauna. By examining pollen trapped inside the lake's sediment, scientists have been able to discover the types of plants that lived on Earth over 10,000 years ago. Countless fossils have been uncovered at Lake Baikal, from ancient sponges to land mammals that roamed the Earth a long time ago.

What Makes The Ice So Turquoise?

Beautiful though the water of Lake Baikal is, it is incredibly difficult to reach as it is covered by an ice sheet that can measure more than 80 inches thick. This protective layer blankets the lake for five months out of the year beginning in January.

In fact, the ice bed can become so thick that vehicles have no issues driving on it. Every year, the annual Baikal Ice Marathon is held on its rock-hard surface, where runners from around the globe come to participate in one of the world's most extreme tests of endurance.

Lake Baikal's healthy waters give off a turquoise gem-like color when it freezes into ice, making it a sight to behold. As Russian photographer Alexey Trofimov puts it, Lake Baikal is like a "gem that does not need to be cut." Not only does the water form into ice, it also creates unique shard-like structures on its surface called "hummocks."

These hummocks are essentially ice splinters that form when the heavy winds around the lake push the waters into waves which then freeze into these turquoise blocks. These ice splinters can form as high as 32 to 39 feet.

The natural beauty of Lake Baikal, often referred to by locals as "sacred sea," has captured the spirits of many who visit it, and it has has unsurprisingly become a religious icon of sorts to believers and pilgrims of different religions. 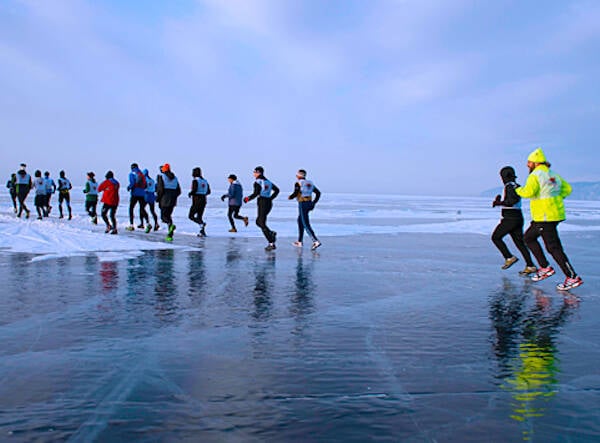 For instance, Olkhon Island — the third-largest lake island in the world and the largest island that sits in the middle of Baikal's waters — is considered a sacred place to the Indigenous Buryat people. Their religious totems covered in colorful ribbons can be found scattered all over the island.

Threats Due To Climate Change And Human Intervention

Unfortunately, like almost all natural wonders on Earth, Lake Baikal's survival is under threat due to climate change and overfishing.

A warming planet has given way to unnatural weather at the lake. Its temperature has risen by more than 1.2 degrees Celsius over the last century and is expected to be 4.5 degrees warmer than it is now by the year 2100.

The warmer temperature means that the water's oxygen levels will become more depleted and its ice caps will melt quicker, endangering the livelihood of its wildlife.

Besides warmer waters, climate change has also caused algal blooms in the lake. These huge growths of algae are toxic to marine life and, if not brought under control, could pose irreversible damage to the lake's entire ecosystem.

Some locals believe that the increasing number of tourists is contributing to its deterioration. However, various news reports suggest overfishing done by locals and businesses around Lake Baikal is one of the biggest perpetrators of its rapid decline.

Legally, a person needs a license in order to fish at Lake Baikal, but enforcement of this law by Russian authorities is weak, particularly in the summer when hoards of people flock to catch fish at the lake. There is also a ban against fishing Omul, a species of salmon only found in Lake Baikal, and strict quotas on catching Nerpas, yet most restaurants near the lake serve both as delicacies anyway.

Additionally, a 2018 report by The Daily Beast described frequent dumps of toxic waste by a local hotel right into Lake Baikal's pristine waters.

"Washing powder that contains phosphate is very dangerous for the lake's species," explained award-winning environmentalist Marina Rikhvanova, who is a senior ecologist from Irkutsk. "The pollution causes overwhelming growth of Spirogyra algae, which pushes out Baikal's endemic sponge, the key cleaner of Baikal's water, and destroys invertebrate organisms, the main food for Baikal's fish."

Devastating those this news may be, there is perhaps a silver lining. If the damages to Lake Baikal are human-made, then couldn't humans be the answer to reversing them?