Maybe "the holy grail of bioengineering for regenerative medicine" isn't as far off as researchers thought. 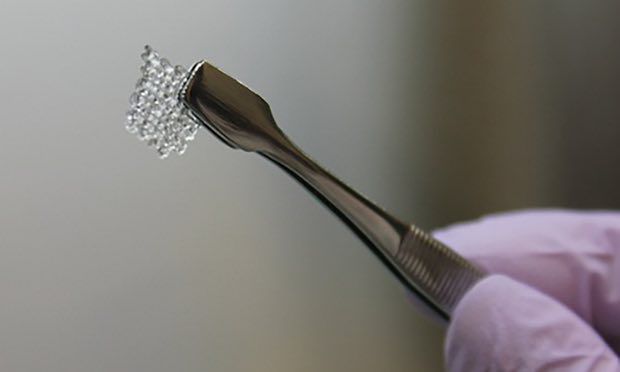 “Our hope is that one day this ovarian bioprosthesis is really the ovary of the future,” one of the study’s authors, Teresa Woodruff, told The Guardian.

The artificial reproductive organs were created using a gelatin derived from the proteins naturally found in the animal’s bodies.

They printed various porous patterns of this material onto glass slides and then overlapped them — each 15 by 15-millimeter piece slowly building onto the next.

Once these “scaffolds” were complete, researchers inserted mouse follicles — or tiny hormone-secreting sacs of egg-holding cells — for preliminary tests.

“The function of the ovary is to shepherd these follicles through maturity into full grown eggs every month,” Woodruff said.

Once they felt certain about which form of scaffold was most effective at keeping the eggs viable (it was the most tightly-woven model), they replaced the natural ovaries of nine mice with the new artificial versions.

The gelatin follicles attached to the mice blood system within a week, allowing the new ovaries to release eggs just like real ones.

Three of the test mice gave birth to healthy babies and then began lactating normally — suggesting their hormone balance was on track despite the surgery.

Those babies then gave birth to babies of their own and no harmful genetic side effects were reported.

Researchers credit the success of the trial to the revolutionary gelatin substance, which is stronger than others that have been created in the past.

“Most hydrogels are very weak, since they’re made up of mostly water, and will often collapse on themselves,” Ramille Shah, another author, said in a press release. “But we found a gelatin temperature that allows it to be self-supporting, not collapse, and lead to building multiple layers. No one else has been able to print gelatin with such well-defined and self-supported geometry.”

Scientists hope this breakthrough will eventually allow them to create similar prosthetics for people who are struggling with infertility.

But humans’ chestnut-sized ovaries are much larger and more complicated than those of mice.

For instance, female mice ovulate every four days are only pregnant for 20 days, meaning that the ovaries made for humans would have to be a lot more long-lasting.

The next step, then, is implanting larger ovaries into mini pigs, which have a reproductive process more similar to ours.

Though the study’s authors caution that the solution for humans is still awhile away, they also admitted they were surprised at how quickly this initial stage of the study was a success.

Maybe “the holy grail of bioengineering for regenerative medicine” isn’t as far off as they thought.

Next, learn how scientists can “turn on” the killer instincts of mice. Then, researchers proved that psychedelic drugs create an “elevated level of consciousness.”