Ninety-year-old Aaron Epstein of California paid $1,100 for his ad, which is almost the same amount he pays for an entire year of AT&T service. 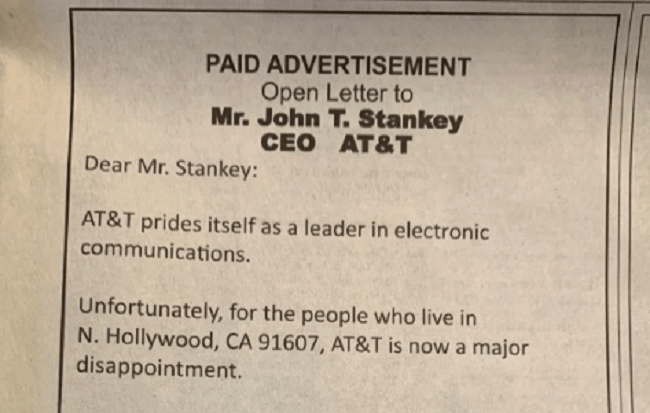 Aaron Epstein has been a loyal AT&T customer for more than half a century. The 90-year-old Californian has generally been happy with the company’s service. However, their ongoing failure to upgrade internet speeds in his neighborhood recently left him fed up — to the point that he bought an ad in The Wall Street Journal to complain.

According to Ars Technica, Epstein grew so irate with his three-megabits-per-second service that he paid $1,100 to run his open letter to the company’s CEO. He even strategically requested that the ad run in the Manhattan and Dallas editions — as the former might convince investors to pressure AT&T, whose headquarters lie in the latter.

“Dear Mr. Stankey,” the ad begins. “AT&T prides itself as a leader in electronic communications. Unfortunately, for the people who live in N. Hollywood, CA 91607, AT&T is now a major disappointment. Many of our neighbors are the creative technical workers in the Universal, Warner Brothers, Disney studios…”

“We need to keep up with current technology and have looked to AT&T to supply us with fast internet service. Yet, although AT&T is advertising speeds up to 100 Mbps for other neighborhoods, the fastest now available to us from AT&T is only 3Mbps. Your competitors now have speeds of over 200Mbps.” 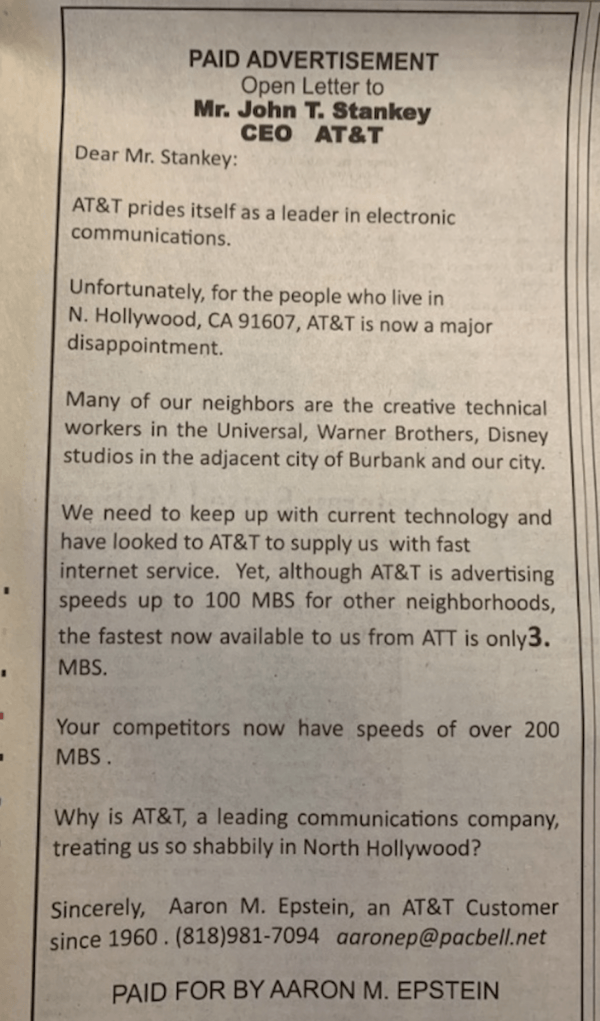 TwitterEpstein’s ad can be found in the Manhattan and Dallas print editions of The Wall Street Journal.

According to Phone Arena, Epstein is seemingly still relegated to AT&T’s DSL network. Putting up with those outdated internet speeds is undoubtedly aggravating.

“Why is AT&T, a leading communications company, treating us so shabbily in North Hollywood?” Epstein rightfully inquired in his letter.

To Epstein’s point, AT&T has made substantial strides in upgrading its DSL services to be in line with modern standards. The company has either offered fiber-to-node service, which brings faster internet speeds to a neighborhood’s local hub (and thus to residents) or fiber-to-home — which is even more direct.

Unfortunately for Epstein, looking up his zip-code on AT&T’s internet and TV services page quickly reveals that “high-speed Internet isn’t available at your address.” Not only is the service provider not upgrading this area’s internet speeds, but is also discontinuing its DSL service there. 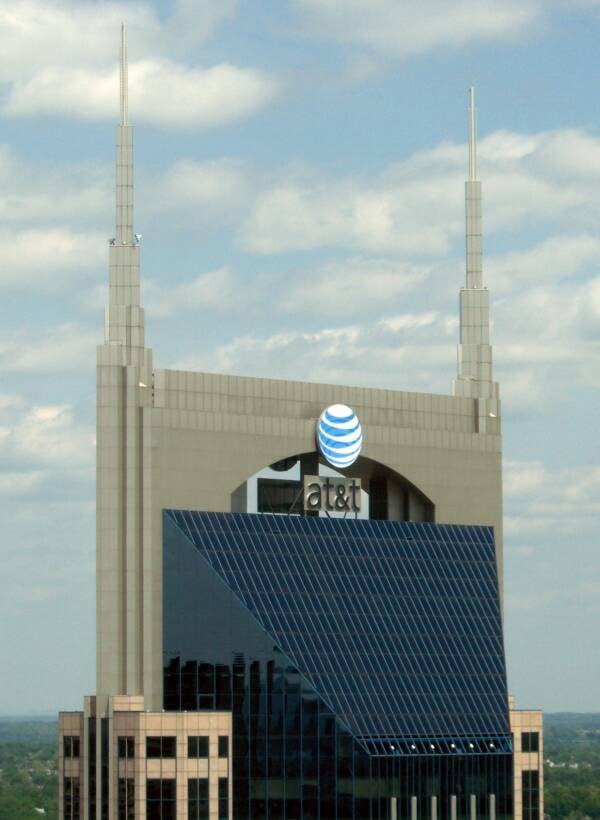 Wikimedia CommonsThough AT&T touts speeds of at least 100 Mbps, Epstein is getting nowhere near that.

Existing customers like Epstein will be able to retain the outdated connection, while the world around them is offered increasingly higher connectivity. As for his bold choice to complain publicly, Epstein initially tried to solve things quietly. Customer service, however, has merely told him AT&T is working on improvements.

“I get very annoyed because, periodically, I get snail mail and periodically I see ads on TV and ads on the Internet offering the faster service [from AT&T],” Epstein explained.

“It’s very frustrating because now we all use streaming services…sometimes the movies are perfectly smooth and fast, and other times it’s too frustrating and I don’t use it at all.” 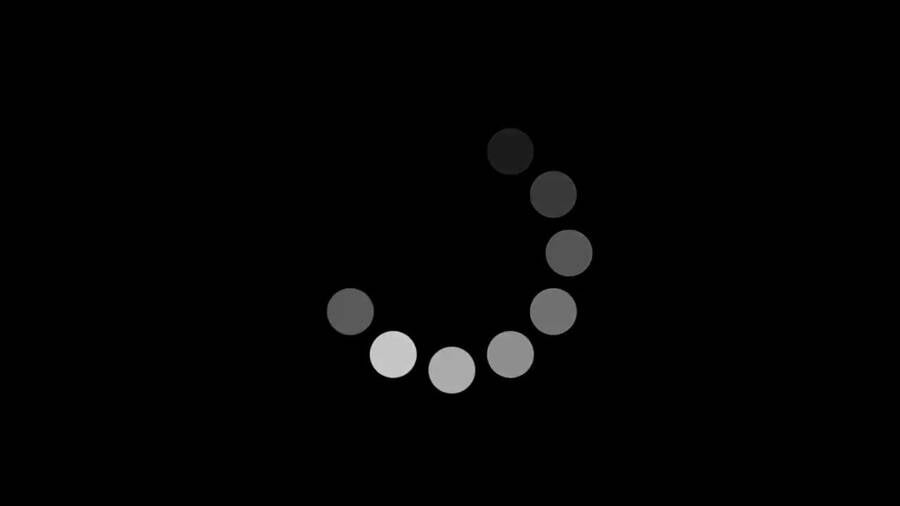 YouTubeEpstein and his wife are often forced to abandon streaming movies when an infuriating loading sign is all they’re met with.

The now-viral advertisement first attracted widespread attention when Raju Narisetti, a publisher at McKinsey Global Publishing, tweeted a photograph of the print ad. The real deal can be found on page A7 of the two aforementioned editions.

Ultimately, Epstein finds himself in an endlessly aggravating pickle. As it stands, he pays for both AT&T and Charter Spectrum’s internet. He’s forced to pay for the former “in order to get phone service,” while it’s already-slow internet speed of 3Mbps often provides even less than that.

While a bandwidth of 1.5Mbps in the year 2021 is an absolute joke, Epstein isn’t laughing. He’s since realized that he could pay a technician to solve the problem. This would allow him to use AT&T for his phone while relying on the faster Charter Spectrum for his internet.

Unfortunately, the coronavirus pandemic has only complicated Epstein’s issue even more. While he feels solving this problem with the help of a technician is currently his best option, he and his wife aren’t too keen on having guests over. As elderly people, they’re naturally more vulnerable to COVID-19 than most others.

In the end, Epstein is paying AT&T $100 per month for two phone lines and internet service. He’s forced to regularly abandon streaming a movie, however, when the bandwidth fails him. While he hasn’t gotten a response to his open letter yet, we’re hoping AT&T does the right thing — and helps the old man out.

Next, read up on Marvin Heemeyer and the “Killdozer” he built to get revenge against the town that dismissed his zoning petition. Then, discover some more of history’s best revenge stories.