The Albany adder hadn't been seen in almost a decade — until a team of scientists found four living in South Africa this spring. 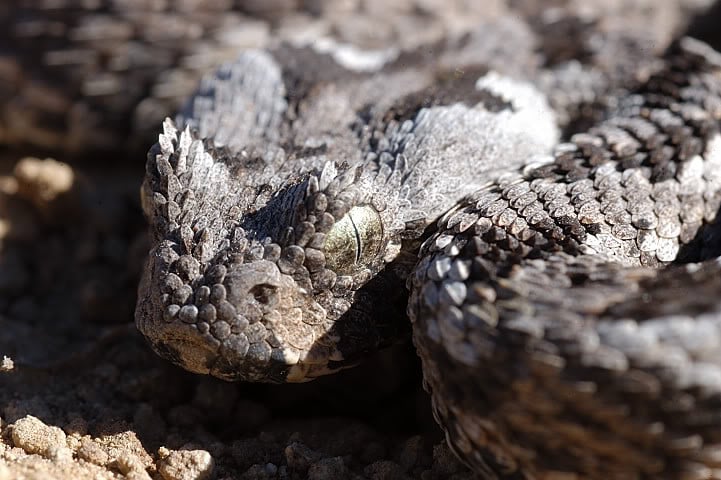 The Albany adder, an extremely rare reptile with distinctive eyebrows and beautifully patterned skin, hadn’t been seen in nearly a decade.

The venomous snake was presumed to be extinct — until this spring, when herpetologists announced the discovery of four Albany adders happily living in the creature’s native South Africa.

“I don’t think we’ve hugged each other that much ever,” one of the members of the expedition said. “We were literally jumping up and down hugging.”

The team from Endangered Wildlife Trust and the Rainforest Trust had set out more than six months ago in hopes of finding the small serpents.

After peering into countless bushes, lifting up endless rocks and gently poking into hundreds of adder-sized holes, they finally found the Herpetology Holy Grail: A six-inch long female Albany adder was slithering across a road in the city of … That, they can’t say.

The adder’s home is being kept secret as a precautionary measure.

“If collectors did find out where and how to locate them, it could be a real threat to the species,” Bryan Maritz, a coordinator for the International Union for the Conservation of Nature’s Viper Specialist Group, told National Geographic.

Though the researchers did eventually find four of the snakes — an incredible number, since only 12 have been recorded since the species was first identified in 1937 — the work to keep them alive is going to be the hard part.

We’ve had some more exciting discoveries in our new work with Albany Adders! EWT field officers Michael Adams and Grant…

Because so few Albany adders have ever been observed, the conservationists charged with protecting them know very little about how to do that.

They don’t know what they eat, how they reproduce, or what kind of threat they pose to humans (they know that the snakes are venomous, but no one’s ever been bitten).

Now, they’re trying to buy up as much of the snake’s habitat as they can in hopes that nature can take it from there.

Next, see what happened when a giant python recently ate a man alive.