In June of 1962, four inmates attempted the impossible with their Alcatraz escape. Today, their fates remain unknown.

In June 1962, three prisoners attempted the impossible by escaping from the most secure prison of the time: Alcatraz Federal Penitentiary.

Alcatraz has had a reputation for being impossible to escape from since its creation in the 1910s. That’s because, with its high walls and armed guards, as well as its location 1.25 miles off the coast of San Francisco, outside of this one possible exception, no one has ever escaped from the daunting prison. 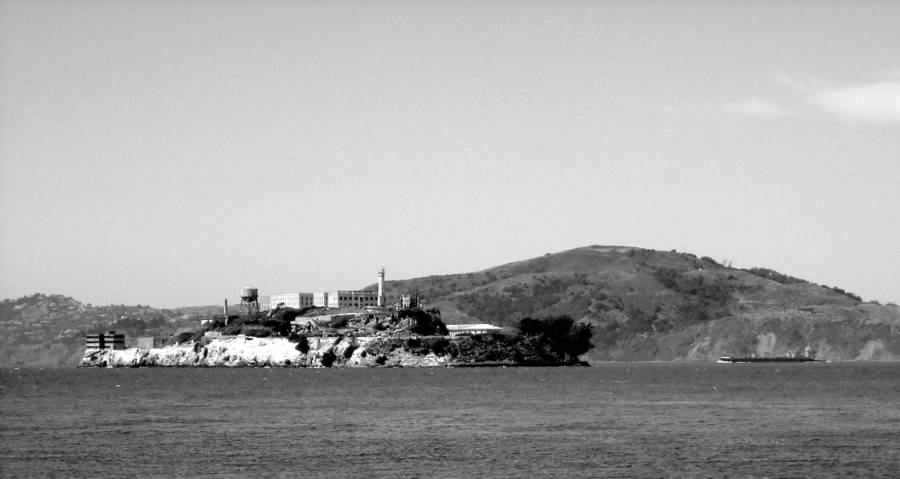 Wikimedia CommonsAlcatraz Federal Penitentiary with Angel Island in the background.

There had been twelve previous escape attempts before 1962, but all had resulted in the prisoners being recaptured, shot, or having drowned in the San Francisco Bay.

However, on June 11, 1962, inmates Clarence Anglin, John Anglin, Allen West, and Frank Morris made the most daring attempt to escape the prison island. 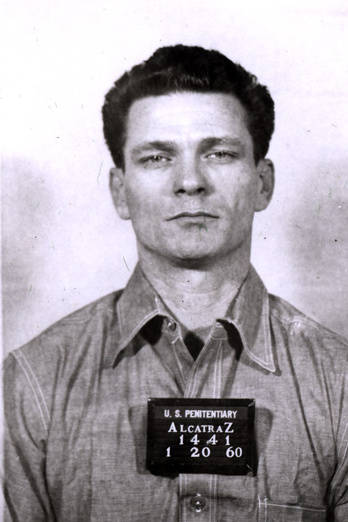 Their caper began, months earlier when the escape plan was hatched by Frank Morris, a career criminal who had become involved in burglary, armed robbery, and drug dealing as a foster child in Washington DC.

Morris was the leader of the group and was considered among the top two percent of the prison population in intelligence according to IQ testing at the time.

It was Morris that assembled the other co-conspirators for his plan. He enlisted John and Clarence Anglin, a pair of brothers from Georgia who had been robbing banks together since they were children, and Allen West, a car thief from New York.

Morris brought these men together to enact his daring plan. Over six months, the four men used stolen saw blades and spoons, as well as an improvised drill made from a vacuum cleaner, to gradually widen the ventilation ducts in their respective cells.

They worked at night, using Morris’ accordion playing to hide the noise of their drilling. During the day, they concealed the holes they’d made with cardboard painted the same color as the walls of their cells.

Widening these grates gave the prisoners access to an unguarded utility tunnel that ran behind the cells. 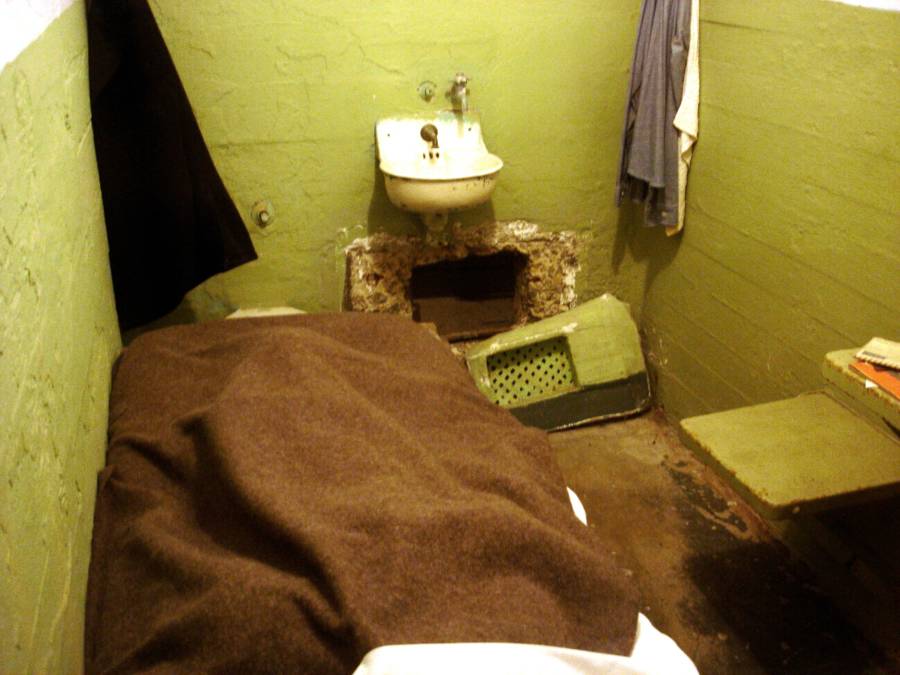 Benlechlitner/Wikimedia CommonsChiseled air vent in one of the cells on Alcatraz that led to the utility corridor.

There, they stored their true masterpiece: a 6-by-14-foot inflatable rubber raft made out of 50 raincoats that were stolen or donated by other prisoners.

While they constructed the raft in the utility tunnel over a period of months, the conspirators concealed their absence from their cells by fashioning convincing dummy heads and placing them on their pillows in their beds while they worked. The heads were made out of a papier-mâché like material formed from soap and toilet paper, and painted in a lifelike manner.

When all their preparations were complete, the prisoners made their escape.

They exited their cell and filed into the tunnel, all except West who was unable to remove the grill covering the ventilation shaft when it became stuck and was left behind. 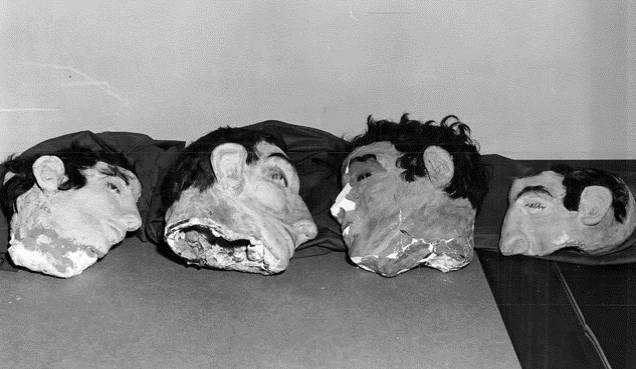 Federal Bureau of InvestigationThe dummy heads created by the prisoners during their escape from Alactraz prison.

The remaining three men then climbed, with their raft, through a ventilation shaft connected to the utility corridor to the roof of the prison.

They then slid down a pipe and hopped two 12-foot tall, barbed wire laden fences, to make their way to a blind spot for the guards, where they inflated their raft.

At some point after 10 p.m. that night, the prisoners embarked on their improvised raft to a fate unknown.

Guards at the prison only discovered the disappearance of these three prisoners the next morning, thanks to the dummy heads they had left in their cells.

From questioning West, police discovered that the escapees planned to sail to Angel Island, an inhabited island in the San Francisco Bay less than two and a half miles away. 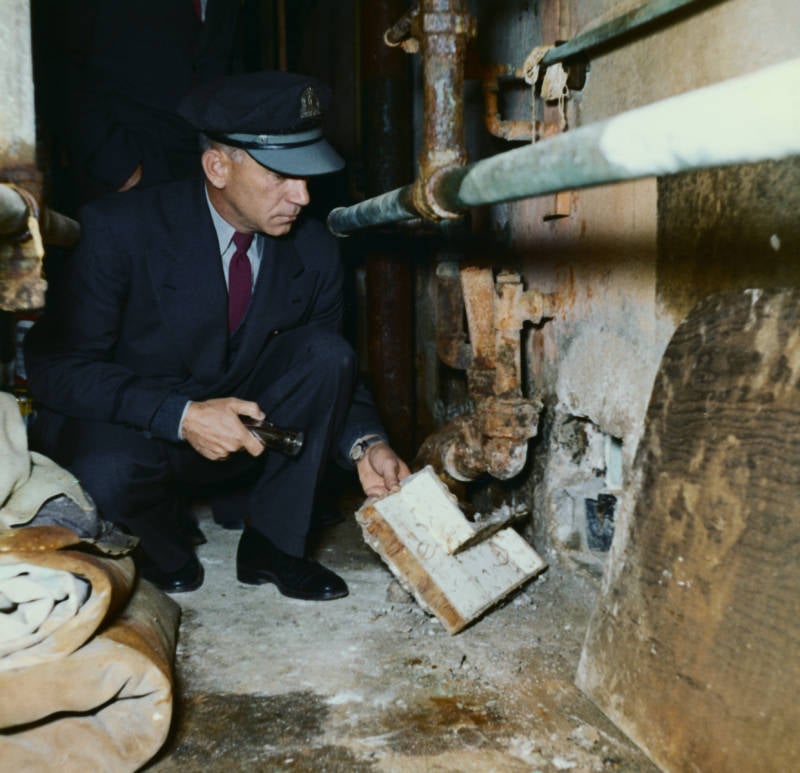 Bettmann/Getty ImagesChiseled air vent from within the utility corridor.

Three days after the Alcatraz escape, the coast guard found one of the men’s paddles floating in the Bay.

On June 21, they discovered shreds of raincoat material on Angel Island Beach. This discovery supports the possibility that the men survived the escape attempt.

However, FBI investigators at the time concluded that due to the strong currents and unfavorable weather conditions in the Bay that night, it is unlikely that the men survived.

They closed their file on the escaped prisoners in 1979, believing that the men likely died at sea. Many others dispute this opinion and maintain that the three men successfully escaped the prison.

Experts and computer models have proven that it is possible that the men could have survived, though it would require a number of factors to have been in their favor. 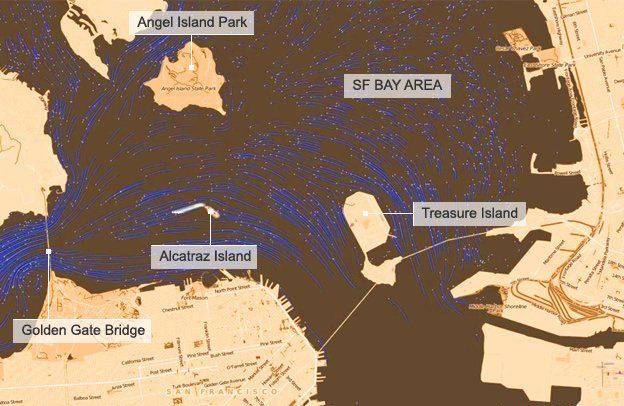 F. BaartMap of the San Francisco Bay showing prevailing currents the night of the escape.

These include the Anglin brothers’ two sisters who came forward in 2012 to claim that they had received a phone call from John Anglin shortly after the escape as well as a Christmas card from him later that year.

Another of their siblings, Robert, confessed at his deathbed in 2010 that he had been in contact with John and Clarence from 1963 until approximately 1987.

The family says that the brothers escaped to Brazil, where family friend Fred Brizzi met up with them at one point in 2012 and even produced pictures of them in the country. 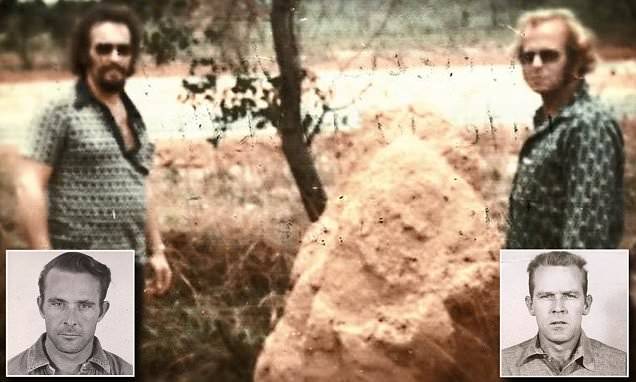 Wikimedia CommonsThe photo alleged to be of the Anglin brothers in Brazil in the 1970s.

The FBI has denied the veracity of these claims and states that it is unlikely the men in the photograph are the Anglin brothers.

As for the mastermind behind this caper, Frank Morris, a man claiming to be his cousin came forward in 2011 saying that he had met with Morris in San Diego after the escape, but the authenticity of this claim is unknown.

What is known is that one night in 1962, these men attempted the impossible, and may have even succeeded.

After learning about the escape from Alcatraz prison, go inside Alcatraz with these 44 historic photos of America’s most notorious prison. Then, read about the women who escaped prison, only to be arrested at escape room.