He was an occultist, ceremonial magician, drug fiend, sex addict, mountaineer, poet, and a “traitor to the British people.” He drew crowds of followers and hoards of critics. He was branded as evil and egotistical, a raging genius, and a messiah of anti-Christianity. It’s safe to say that few people in modern history generated as much controversy, shock, and scandal as Aleister Crowley. 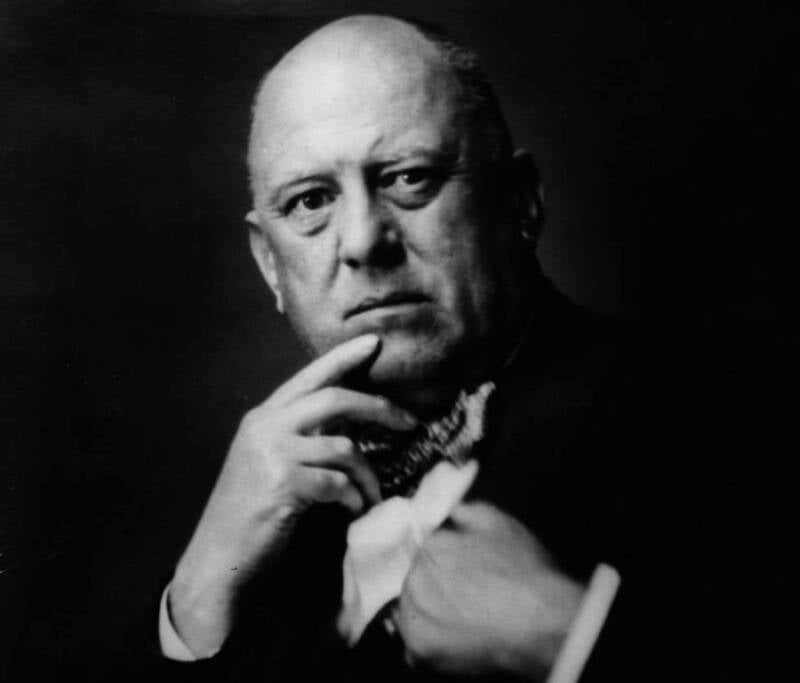 Stringer/Getty ImagesKnown as the Great Beast 666, Aleister Crowley was one of the most controversial figures in modern British history.

The tabloids called him the “Wickedest Man In The World,” and a “Master Of Darkness.” But how do you begin to describe a man who was banned from Mussolini’s Italy for acts of extreme depravity, and who also rubbed elbows with the most respected writers of the 20th century while penning textbooks on tantric sex magic? Let’s take a closer look at the complicated life of Aleister Crowley. 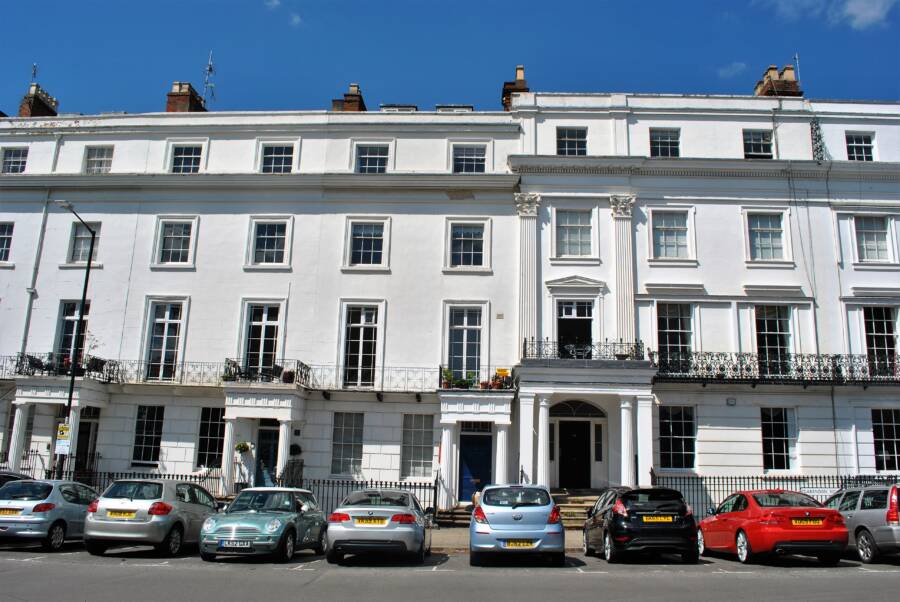 To understand Aleister Crowley, or to come as close to understanding him as he would allow, one must start with his upbringing.

Born Edward Alexander Crowley in 1875, he quickly found himself amongst some of Britain’s most devout Christians, the very opposite of the type of people he would attract later in his life. His father was an evangelist, and at first, Crowley found himself entirely devoted to the religion, out of respect for his father. 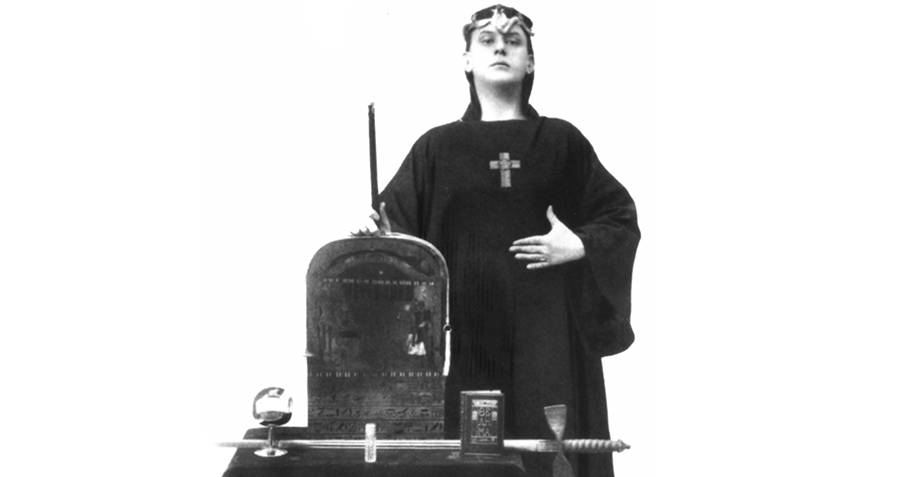 Crowley adopted the name Aleister in 1895 when he was 20 years old. His reasons for discarding his old name, outlined in his autobiography, seem to foreshadow every choice he would make in his adult life, as they depict a man with high ambitions, firm ideals, and a complete disregard for personal connection:

“For many years I had loathed being called Alick, partly because of the unpleasant sound and sight of the word, partly because it was the name by which my mother called me. Edward did not seem to suit me and the diminutives Ted or Ned were even less appropriate. Alexander was too long and Sandy suggested tow hair and freckles.”

“I had read in some book or other that the most favorable name for becoming famous was one consisting of a dactyl followed by a spondee, as at the end of a hexameter: like Jeremy Taylor. Aleister Crowley fulfilled these conditions and Aleister is the Gaelic form of Alexander. To adopt it would satisfy my romantic ideals.”

Crowley’s First Forays Into The Dark Depths Of Occultism

The same year that he changed his name, Crowley enrolled at Cambridge University. His life at Cambridge paints a picture of a lifestyle fit for an Austenian hero — a tortured soul practicing chess, penning poetry and inspired literature, and dreaming up exotic mountain climbing adventures in his spare time.

However, Aleister Crowley was about as far from a Mr. Darcy type as one could be. Under his polished, collegian exterior lay a deeply tumultuous man, harboring secret plans of magical domination, maintaining borderline-sadistic sexual relationships with both men and women, and delving ever deeper into the world of the occult. 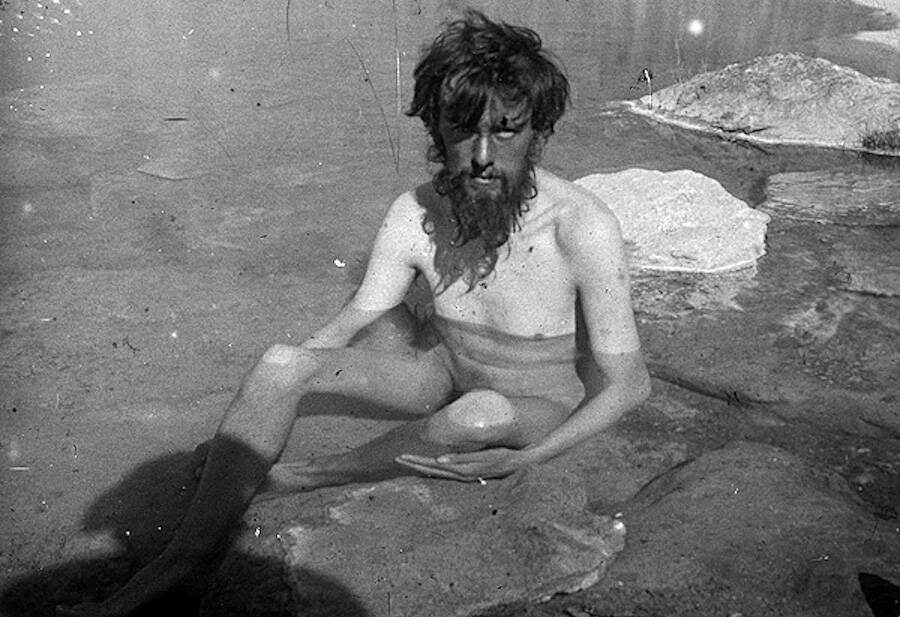 In 1898, Crowley met a chemist named Julian L. Baker, a member of the Hermetic Order of the Golden Dawn, which he joined. The order was devoted to studying paranormal activity and all matters of the occult.

Eventually, Crowley hired a senior member of the group to be his live-in personal tutor on the subject. Together, Crowley and his tutor experimented with ceremonial magic and the ritualistic use of drugs.

Independently, Crowley continued to explore his bisexuality and seek out prostitutes. But while this life for him was eye-opening and spiritual, higher-level members of the Golden Dawn considered it too libertine and refused to allow him entry into the upper levels.

Having had enough of Europe after his stint with the Golden Dawn, Aleister Crowley traveled to Mexico, bringing to life his past dreams of mountain climbing. From there, he traveled to Japan, Hong Kong, Ceylon, and India.

While in India, Crowley began practicing raja yoga, a Hindu meditation tradition. He later accompanied mountaineers in the first-ever attempt to climb K2 in 1902.

Travels Through Europe And Falling In Love 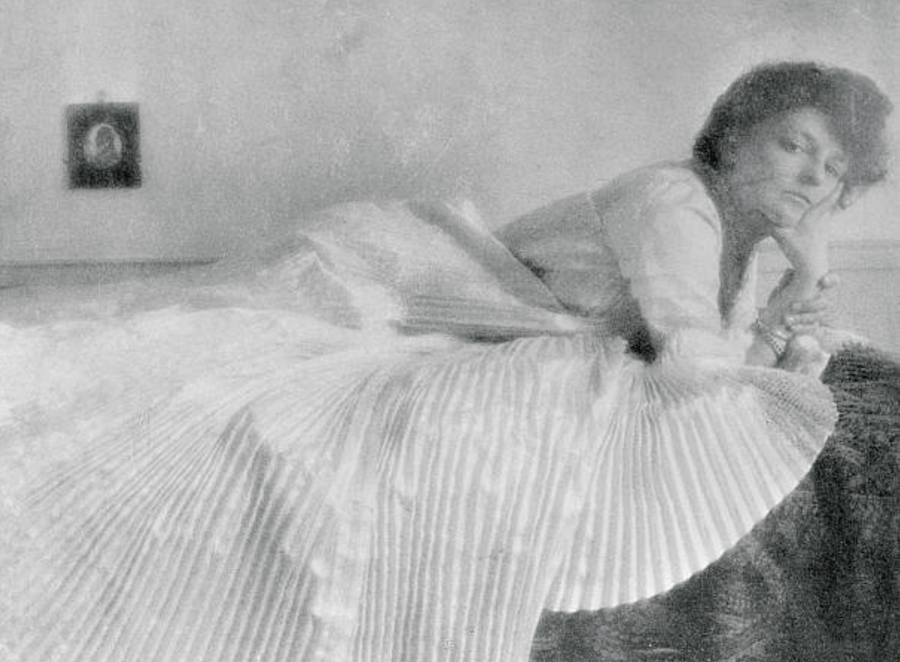 In November of 1902, Crowley traveled back to Europe, settling in Paris and immersing himself in the art world. Again, his lifestyle painted quite a different picture than the one he was truly living, as he surrounded himself with famed artists like painter Gerald Kelly and sculptor Auguste Rodin.

To the surprise of many, Paris was where Aleister Crowley fell in love.

Gerald Kelly introduced Crowley to his sister Rose during a meeting, after which the two married. At first, the marriage was one “of convenience” to prevent her from entering an arranged marriage.

But before long, the two fell in love for real. Crowley even set aside his profane, dark writings, and penned his wife several love poems.

Despite their initial arrangement, Rose and Aleister Crowley could not be a more perfect pair. Rose accompanied Aleister on his journeys and went along with his schemes, and indeed it was through her that Crowley found the inspiration to begin his own religion.

While Rose was meditating, she informed Aleister that the Egyptian god Horus was waiting for him. In 1904, through his own meditation, he heard the voice of Aiwass, the personal messenger of Horus.

Using the words of the messenger and Horus himself, Crowley transcribed The Book of the Law, the book that would become the basis of his new religion, Thelema.

The main teaching of Thelema was a similar principle to the one that Crowley had lived by his whole life: “Do what thou wilt.”

The teachings were intended to act as a successor to the Hermetic Order of the Golden Dawn and were seen as extremely similar to theirs.

In 1907, Crowley founded the occult order, naming it the A∴A∴. Crowley devoted almost all of his time to building the order, writing its literature, and creating a periodical for its members.

A Tumultuous Personal Life In The Era Of Two World Wars 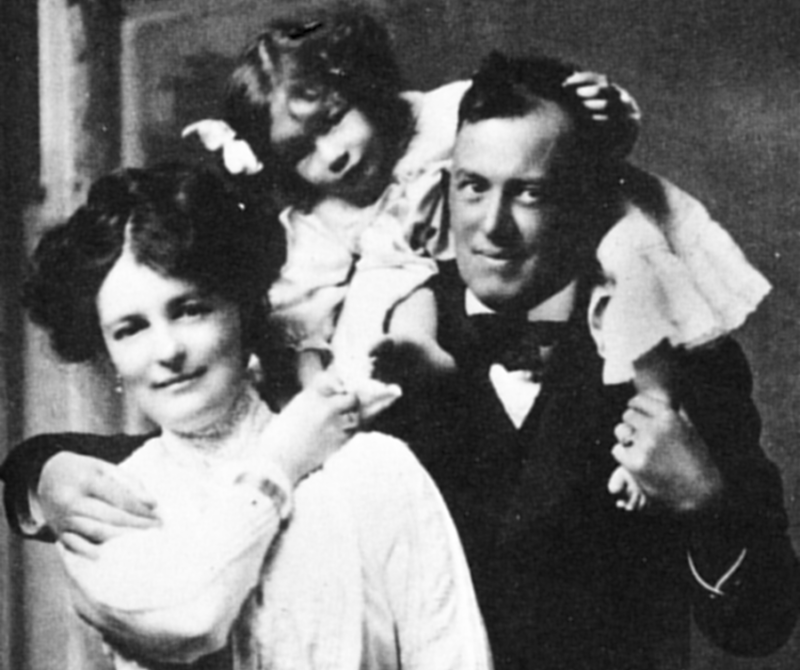 While Crowley was consumed by the words of Horus and his desire to feed the masses information about the occult, his wife was descending into her own darkness of full-blown alcoholism.

Meanwhile, their daughter Lilith had died of typhoid in 1906. Despite the illness, Crowley still blamed her death on Rose’s inability to get a grip on the world around her.

Despite her apparent failure to remain sober, Rose and Aleister had another daughter, Lola, who was entrusted solely to Rose’s care upon the pair’s divorce in 1909. Eventually, Rose was committed to an institution in 1911.

The bulk of Aleister Crowley’s life after his divorce was spent floating from city to city, as he had before, picking up several “scarlet women” along the way, one of whom allegedly bore him a son, who he named Aleister Atatürk.

His travels were dogged by rumors that he was working as a British intelligence spy, as several countries he drifted through were coincidentally under investigation by the Brits.

He continued to publish occult manuscripts and engage in sex with prostitutes in the years during World War I. 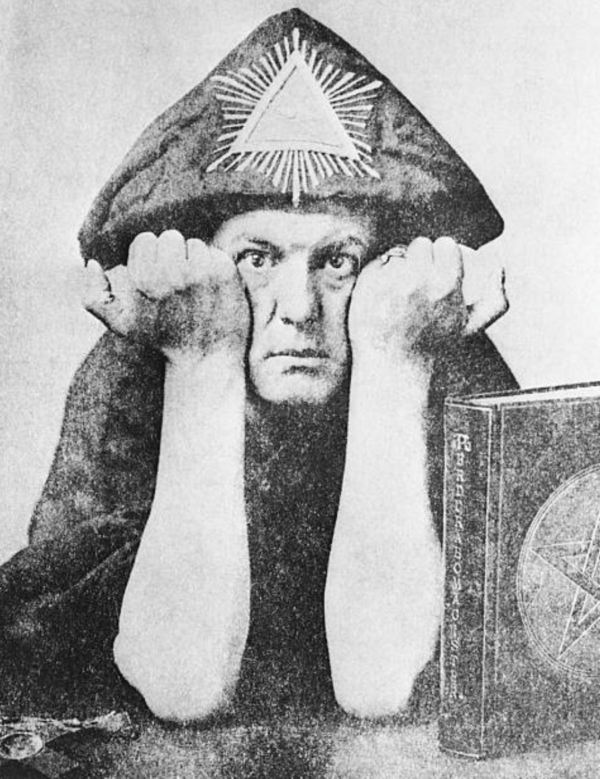 By 1920, he’d moved to Sicily, where he established the Abbey of Thelema as his headquarters. There, he and his followers experimented with sex, drugs, and a series of bizarre rituals.

But in 1923, an Englishman died under mysterious circumstances after one ritual where he allegedly consumed the blood of a cat. Mussolini’s government was so appalled that they banned Crowley from Italy, forcing the headquarters to close and the group to disperse.

But that didn’t mean Crowley was done. He soon found an assistant who helped him transcribe his teachings and publish his books. And by the late 1920s, he got remarried to a Nicaraguan woman named Maria Teresa Sanchez, so that she could join him in Britain.

During World War II, he rubbed elbows with known figures from the intelligence community, such as Ian Fleming and Roald Dahl, though the rumors of Crowley’s involvement in actual intelligence were never confirmed.

However, he did offer his services to the Naval Intelligence Division at one point — and he was turned down.

On Dec. 1, 1947, Aleister Crowley died at age 72, his body giving out to chronic bronchitis. His funeral, dubbed the “Black Mass,” was only attended by a few of his closest friends and associates — despite his words reaching hundreds of thousands of people throughout the years.

It seems that even though he’d gained the infamy he’d always wanted, he was not remembered fondly as a person. However, friends and family assured everyone that he wouldn’t have wanted to be.

The Complicated Legacy Of Aleister Crowley

Though he was gone, the impact of Crowley lived on, not only in occultists – possibly the only people who remember him fondly – but also through writers, artists, philosophers, and musicians.

Crowley’s image stands, amongst others, on the cover of The Beatles’ Sgt. Pepper’s Lonely Hearts Club Band album, and his motto, “Do what thou wilt,” is inscribed on Led Zeppelin’s Led Zeppelin III vinyl. David Bowie referenced him in the lyrics to “Quicksand,” and Ozzy Osbourne paid tribute to him with a whole song titled “Mr. Crowley.”

Today, the legacy of Aleister Crowley is a collage of intrigue.

Those who remember him often lend their ideas of him to his image as a cookie-cutter villain, an image that might not be too far off. His name is whispered with horror amongst devout Christians, with skepticism amongst conspiracy theorists, and with awe amongst the occultists and pagans.

Ultimately, Crowley’s goal was achieved – no matter what they say when they whisper his name, it’s still being whispered today.

Now that you know about Aleister Crowley, the “wickedest man in the world,” read up on history’s most infamous cult leaders. Then, learn about the most interesting mad scientists of all time.