Child Brides And Mass Suicides: The Monsters Behind 9 Of History’s Most Notorious Cults

Whether through religion, drugs, or coercion, every one of these nine cult leaders assembled a following that was willing to kidnap, kill, or cannibalize in their name.

Several members of Charles Manson’s band of social outcasts are still in prison. The famed Sharon Tate murders are now half a century old, but that violent end to the 1960s resonates today.

After the pregnant actress was found butchered in her Hollywood Hills home, it was also discovered that some of her killers were barely adults. But that’s the power of belief. With the right amount of fabricated empathy and intellectual manipulation, cult leaders are able to strip a person of their autonomy, command them to do whatever they want, and maintain their loyalty at all costs.

Cult members have injected their own children with cyanide, engaged in gunfights against police, and released sarin gas on the public — all in the wide-eyed servitude of a single man.

Indeed, the power of cult leaders is a terrifying reality. Here are nine of the most unnerving examples of them from the 20th century.

David Koresh, The Cult Leader Behind The Waco Disaster 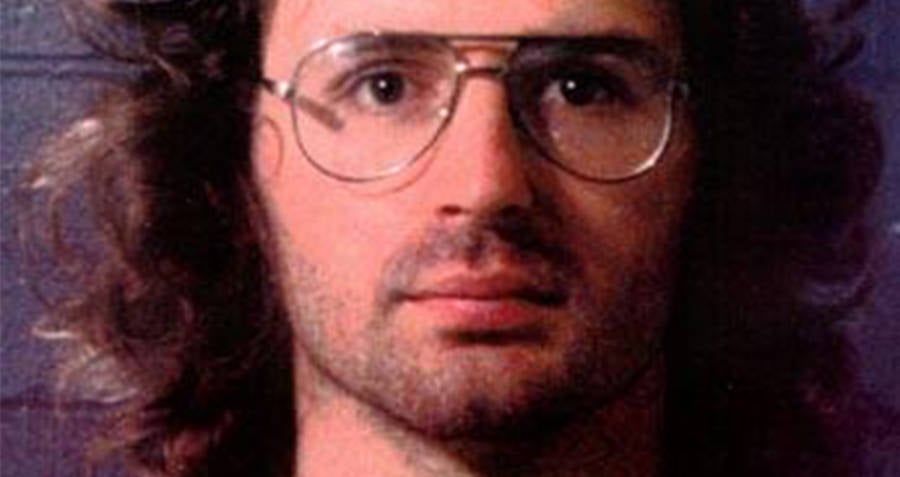 As the prophet of the Branch Davidians, David Koresh preached that he could bring his followers to Heaven. Instead, he led them on a 51-day standoff with the FBI that ended in bloodshed.

Born Vernon Wayne Howell on Aug. 17, 1959, David Koresh never knew his father. He was left with his 14-year-old mother and largely raised by his maternal grandmother who religiously included him in her regular trips to church.

The Seventh Day Adventist environment would become a formative scene for the future cult leader, one which would teach him a lot about the power of belief.

In his teen years, Koresh was placed in special education classes for his debilitating dyslexia. Socially awkward and unpopular, he dropped out of high school before reaching his senior year.

Then in his 20s, Koresh raped and impregnated a 15-year-old girl. Naturally, this was only the beginning of a history of sexual aggression. 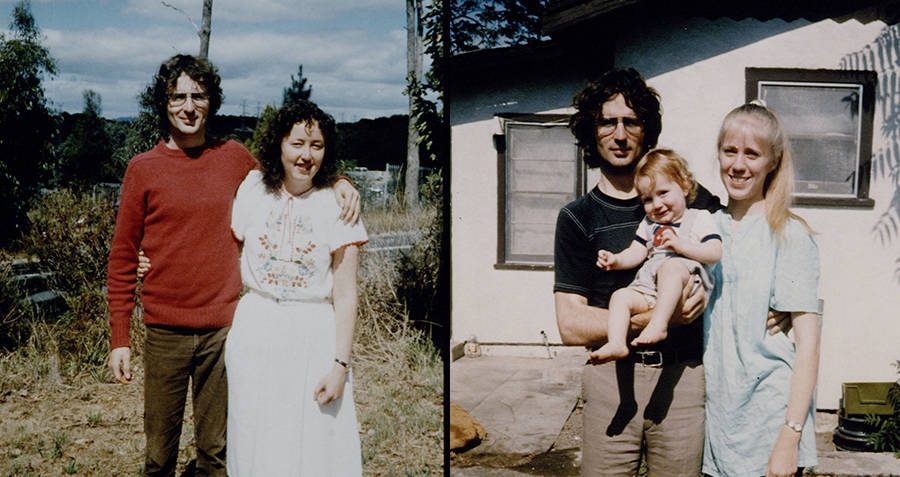 Getty ImagesDavid Koresh with members of the Branch Davidians, including one of his wives and children on the right.

Koresh’s evangelical church banned him after he relentlessly pursued the pastor’s teenage daughter. Koresh defended himself on the claim that God had ordained the two to be wed.

Koresh would make similar such pronouncements after moving to Waco, Texas in the early 1980s and joining the Branch Davidians. The church’s compound, known as Mount Carmel, was founded by Ben Roden. He was replaced by his wife Lois when he died.

Though 65 years old at the time, it’s believed that Lois entered into a sexual relationship with Koresh. This allowed him to rapidly climb the cult’s ranks and soon, he was permitted to teach his own lessons.

This naturally earned him the ire of Lois’ son, George, who’d been the rightful heir to Mount Carmel and its congregation before Koresh had even arrived. Koresh’s claim that God wanted him to procreate with Lois didn’t help matters.

He was exiled in 1985 and moved to Palestine, Texas with 25 other Branch Davidian church members to form his own group.

Home movies of David Koresh and the Branch Davidians, courtesy of 48 Hours.

Koresh’s exile from the Branch Davidians furthered his religious delusions but also drew a sizable amount of worshippers from all over the world. A successful visit to Israel left him confident that he was the reincarnation of the prophet Cyrus. He also believed that Mount Carmel was the earthly site of the Davidic Kingdom and that he must reclaim it in the name of God.

He subsequently legally changed his name from Vernon Howell to David Koresh, which was an allusion to King David and the biblical name of Cyrus the Great.

By this point, Lois had died and left Mount Carmel in her son’s hands. He’d rebranded it as “Rodenville” and was running it tyrannically enough that the Davidians were losing faith in it. Scared of Koresh’s return and appeal, George challenged the former member to a duel of loyalty:

Whoever could raise a man from the dead would become the rightful leader of the Branch Davidians.

Koresh used the opportunity to tell police what Roden was up to but he required evidence to convince them. When Koresh and seven of his followers trespassed to gather said evidence, a resultant gunfight left Roden injured and Koresh and his men under arrest.

Koresh told police that he merely meant to gather evidence of Roden’s illegal activities and he was consequently acquitted. But Roden himself was charged with murder when he killed one of his supporters with an ax in 1989. This allowed Koresh to raise enough money to buy the Waco property and take it over himself. 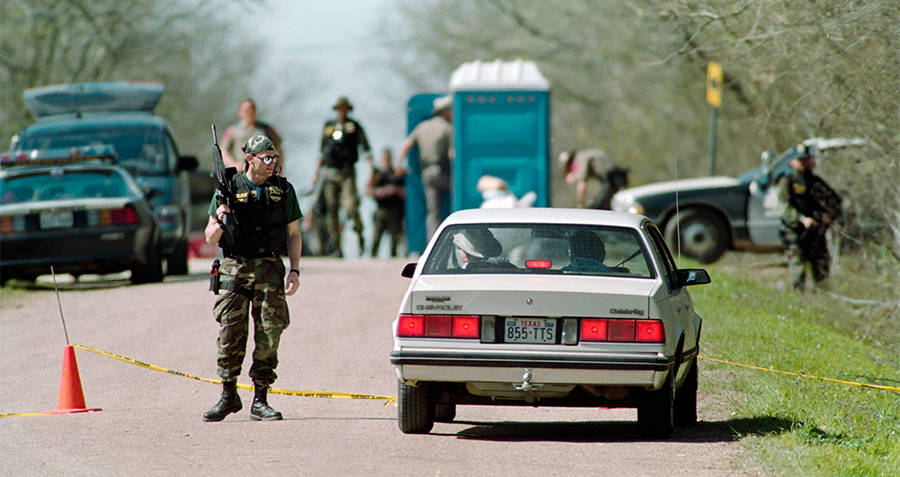 Bob Pearson/AFP/Getty ImagesATF agents guard all roads leading to and from the Waco compound.

But the church under Koresh’s rule fared no better. The compound was investigated extensively for statutory rape and both physical and sexual abuse. Also rampant were reports of “spiritual marriages” between underage women and much older men, and Koresh himself admitted that he’d fathered children with several women and girls in his church.

Ultimately, Child Protective Services probes failed to find concrete evidence of these activities. Meanwhile, Koresh preached to his followers that the End Times were near and that forming an “Army of God” was imperative. The church began to amass an arsenal.

By February 1993, agents of the Bureau of Alcohol, Tobacco, and Firearms (ATF) attempted to arrest and serve Koresh with a warrant for the possession of illegal firearms. Infamously, a four-hour gunfight erupted that led to the deaths of four ATF agents and six of Koresh’s followers. 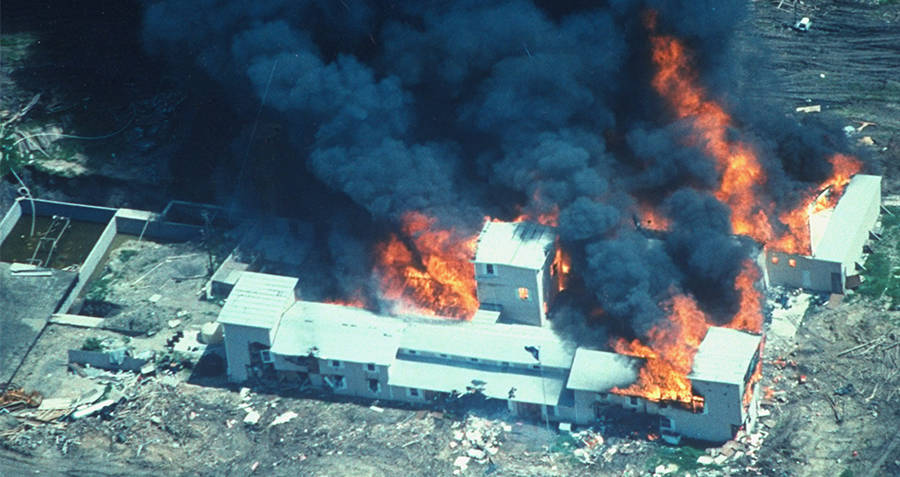 Wikimedia CommonsMount Carmel on fire during the Waco siege.

While some of the Branch Davidian church members managed to escape the compound with their lives, over 80 men, women, and children remained inside. ATF and FBI negotiators worked tirelessly to come to a compromise, but things tragically escalated.

When tear gas was lobbed onto the premises the Branch Davidians retorted with gunfire. Now, all was lost. The compound eventually caught fire, presumably from propane tanks within it or from grenades authorities had used. The ensuing inferno left 76 people dead.

Many followers died when the compound’s gymnasium collapsed. Others were shot. Koresh was found shot in the head, but whether or not he did it on his own remains unknown.

Nearly two-dozen Branch Davidians who were killed were no older than 17.