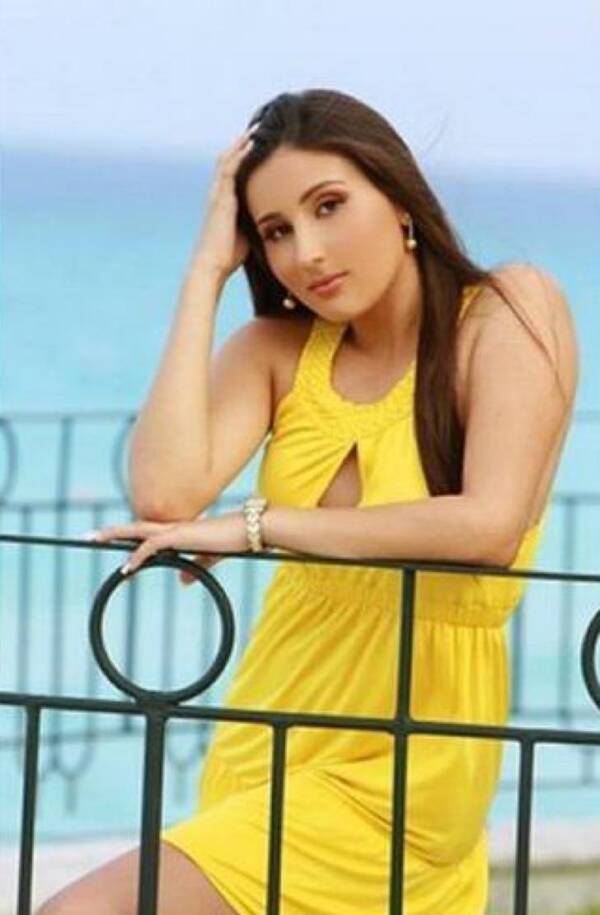 TwitterA photo believed to be of Alejandrina Gisselle Guzmán Salazar, the daughter of El Chapo.

The exploits of Joaquín “El Chapo” Guzmán, the infamous Mexican drug lord, are well known. But members of his family often seem to flit in and out of the spotlight, emerging only beneath salacious headlines or in mugshots before disappearing back into El Chapo’s shadow. Such is the case with El Chapo’s daughter, Alejandrina Gisselle Guzmán Salazar.

For most of her life, Salazar quietly lived outside of her father’s notorious legacy. She went to school and even studied medicine. But in recent years, she has made headlines of her own — for her arrest, her lavish wedding, and for the brand she built based on her father’s name.

Indeed, Alejandrina Gisselle Guzmán Salazar has seemed to embrace both the good and the bad of her father’s reputation. On social media, she once allegedly wrote: “I’m beautiful because of my mother, intelligent because of my father, and a murderer because of me.”

This is everything known about El Chapo’s daughter, the elusive Alejandrina Gisselle Guzmán Salazar.

How El Chapo’s Daughter Forged Her Own Path

Very little is known about Alejandrina Gisselle Guzmán Salazar’s early life aside from the basic facts. Born around 1983, she’s the eldest daughter of Joaquín “El Chapo” Guzmán, a drug lord of the Sinaloa cartel, and his first wife, Alejandrina María Salazar Hernández.

According to Mag, however, she didn’t rely on her father’s billions in drug cartel money to keep herself afloat. In 2005, she graduated from the University of Guadalajara and went on to have a career in business and medicine.

But like her infamous father, Alejandrina Gisselle Guzmán Salazar’s various adventures have churned up some headlines. Over the years, Salazar has made news for everything from her arrest at the U.S. border to passing out COVID-19 supplies in Mexico. 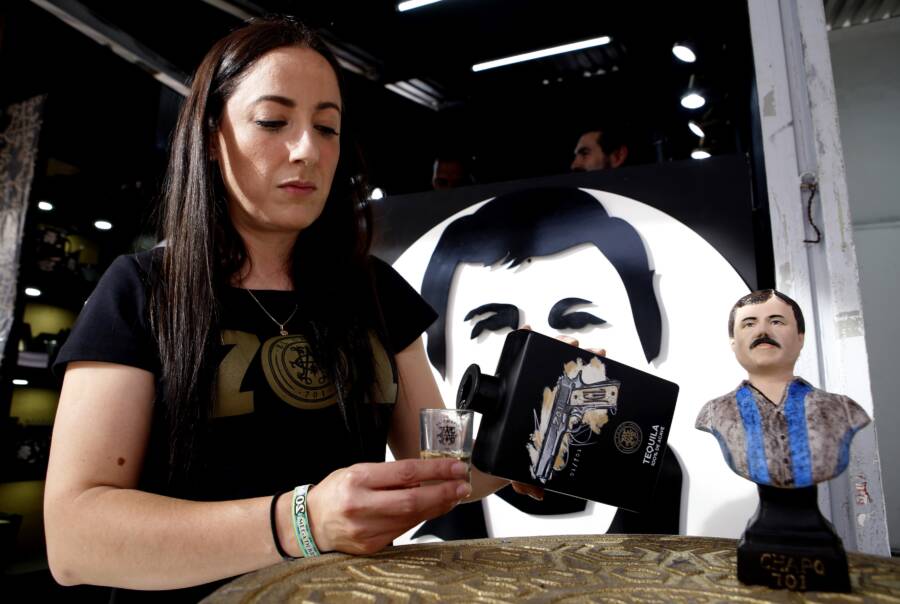 ULISES RUIZ/AFP via Getty ImagesAlejandrina Gisselle Guzmán Salazar seems unashamed of her father’s reputation, having allegedly provided his name during her arrest at the U.S. border and later launching a brand based on his image.

One of the first times Alejandrina Gisselle Guzmán Salazar made headlines was in 2012. Then, she was arrested for trying to cross the U.S.-Mexico border while using a false visa and a false name. According to the Los Angeles Times, she was pregnant and wanted to give birth in Los Angeles.

However, though Salazar allegedly told customs officials the identity of her father, significant confusion reigned in the subsequent weeks about whether or not she was actually El Chapo’s daughter. News organizations identified her as a medical doctor from Guadalajara.

“I’m not confirming whether she is or isn’t his daughter,” one of her attorneys, Jan Ronis, told Forbes at the time.

Salazar pleaded guilty to the charges against her and was deported before she gave birth. Even then, however, her attorneys refused to definitively confirm her identity.

“The government treated her just like anyone else caught trying to enter the U.S. illegally for the first time,” another of her attorneys, Guadalupe Valencia, told Reuters. “They treated her fairly regardless of who she is or who she says she is.”

He later added, “When she’s back in Mexico, hopefully, she can go on living her normal private life.”

But back in Mexico, Salazar continued to make news. In 2019, she fully embraced her identity as El Chapo’s daughter with the launch of the “El Chapo 701” fashion line. The 701 number is significant — it’s El Chapo’s rank on Forbes’ 2009 list of the world’s billionaires.

“In the entire world, he is known as the CEO of Sinaloa or the Lord of the Mountains. He is the unique and legendary 701,” the company’s website said at the time, per CNN.

In 2020, Salazar also expanded the brand to include tequila and beer. And that year, she yet again proved that she was proud to be her infamous father’s daughter.

Living In The Shadow Of Her Father’s Infamous Legacy 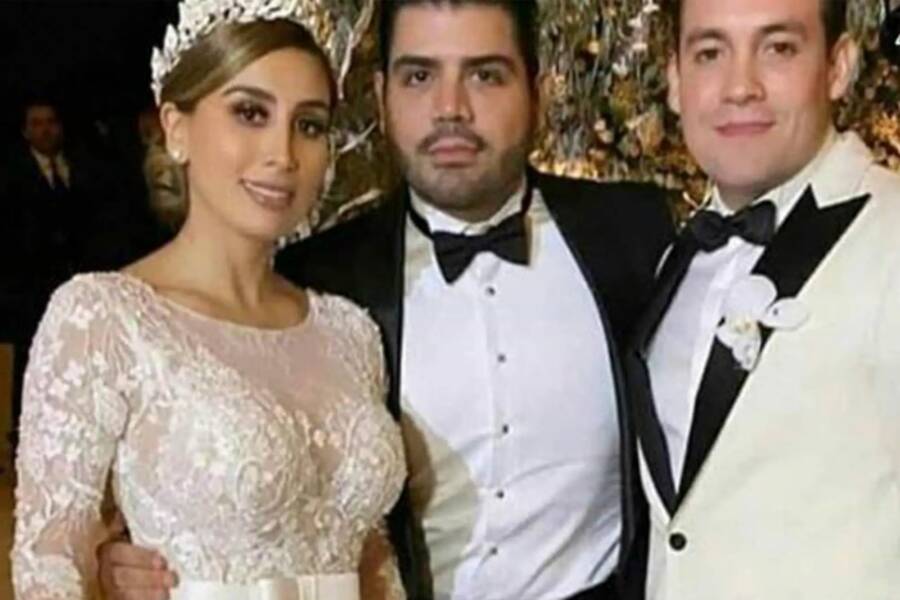 InstagramAlejandrina Gisselle Guzmán Salazar at her wedding, which shut down a prominent cathedral and attracted multiple cartel members.

In early 2020, Alejandrina Gisselle Guzmán Salazar made the news twice in a matter of months. Both stories made it clear that she held her father — and his reputation as a cartel leader — in high esteem.

On January 25, Salazar married Édgar Cázares, the nephew of Blanca Margarita Cázares, an alleged cartel money launderer called “La Emperatriz del Narco,” or “The Empress” in English. Their wedding took place at the Culiacán cathedral in Sinaloa — which was closed to the public for the occasion — and had senior cartel members in attendance.

“This has been one of many Achilles heel[s] of the Mexican church – its relationship with organized crime – in the last 30 years or so,” Rodolfo Soriano-Núñez, a sociologist who studies the Mexican Catholic church, told The Guardian.

He added: “Locking down the cathedral and pretty much giving it away gives very bad optics and forces one to raise all sorts of questions regarding the decision-making process.”

“It is a reminder of how deeply embedded and powerful the Guzmán family remains in Sinaloa’s society. They are effectively part of the elite,” explained Falko Ernst, a senior Mexico analyst for the International Crisis Group. “They are treated as such by other members of the elite, including parts of the church.”

Elite or not, Salazar stepped up to help her community when the COVID-19 pandemic hit in March 2020. Just as the cartels did, she organized supplies like masks and helped pass them out — though she did so under the banner of her El Chapo 701 company, not the Sinaloa cartel itself. The masks she offered people, however, did feature an image of her father.

Actions like this certainly suggest that Alejandrina Gisselle Guzmán Salazar takes great pride in her father’s reputation. El Chapo may be infamous, but his daughter seems happy to embrace his legacy.