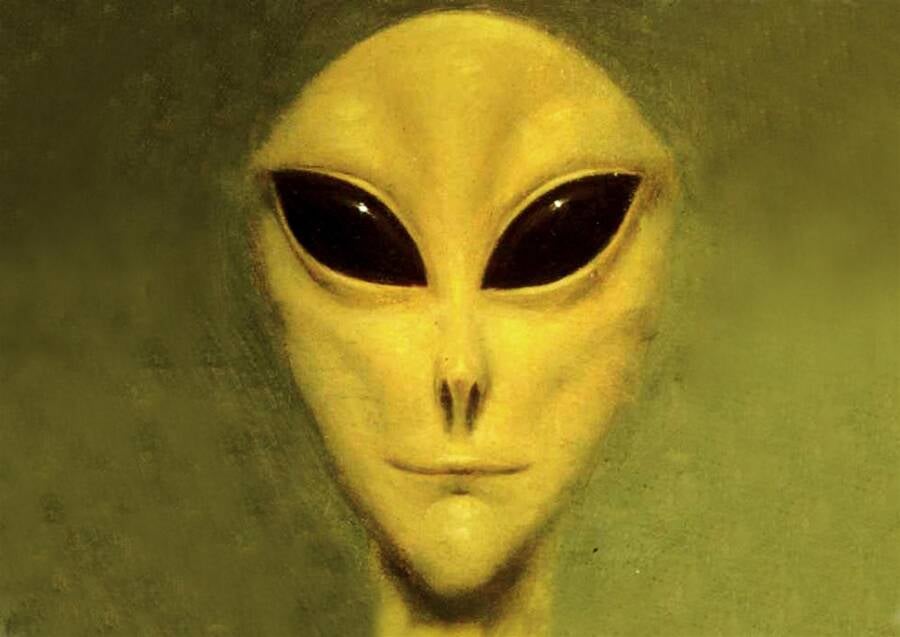 Beech Tree BooksStrieber’s “visitors” have been interpreted by many to look like these creatures depicted on the cover of his book Communion.

Whitley Strieber has written fiction for more than 40 years, with notable titles including the horror novels The Wolfen and The Hunger. Strieber contends that his writing streak was interrupted one night in the late ’80s by an alien abduction in upstate New York.

Strieber recounted this experience in his non-fiction title Communion in 1987. The alleged incident occurred on the night of Dec. 26, 1985, as Strieber slept alone in his cabin in the woods.

Woken by a strange noise, he purportedly saw a small non-human entity approaching his bed. Suddenly, it was morning. Not only had he awoken disoriented, but he felt oddly aggressive, too. It was during a session of regressive hypnosis a few months later that some of the memories returned. According to Strieber, beings that he has since referred to as “visitors” entered his home and abducted him.

While seen as a work of fiction added to his catalogue of alien stories by many, Strieber never wavered from his position. In fact, his later work only doubled down on the notion that aliens were visiting him — in his book The Key: A True Encounter, Strieber detailed another alien encounter that he claims took place in Toronto.

Asleep in his Delta Chelsea Hotel room in the middle of the night on June 6, 1998, Strieber claimed to have been visited by another mysterious stranger.

“I got up to open the door, thinking it was the room service waiter,” Strieber recalled. “It was not. It was a man I described as about five and a half feet tall, older-looking, like someone in his 70s. He wore dark-colored clothing, a turtleneck and charcoal slacks.”

Strieber claimed the visitor stood motionless by the window for nearly an hour, expounding on the dangers of creating an intelligence more evolved than its creator. Strieber said it was “the most extraordinary conversation I have ever had in my life.”

Many are skeptical of Strieber’s alien abduction claims, but one former Green Beret Commander and developer of weapons at Los Alamos, New Mexico, John B. Alexander, believes him:

“For more than two decades, I have been interacting with Whitley Strieber and found him to be one of the most intelligent and thoughtful researchers in the field,” said Alexander. “There is no doubt he has had some very strange experiences — ones that even he does not claim to fully understand.”