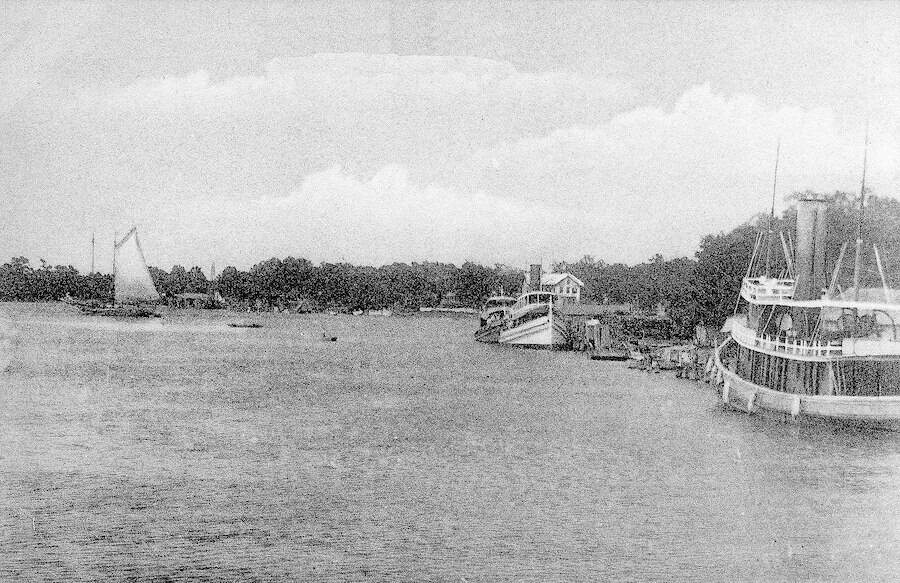 Wikimedia CommonsThe Pascagoula River at the turn of the 20th century.

It was Oct. 11, 1973, when Calvin Parker and Charles Hickson went fishing on the banks of the Pascagoula River in Mississippi. At first, when Parker saw blue lights reflected in the water, he thought police had come to instruct the two to leave.

“A big light came out of the clouds,” Parker recalled. “It was a blinding light. It was hard to tell with the lights so bright, but it looked like it was shaped like a football. I would say, just estimating, (it was) about 80-foot. (It made) very little sound. It was just a hissing noise.”

Parker then claimed that three legless creatures floated out of the vessel toward him. He described all three as having mitten-shaped claws; while one was neckless and gray, the other appeared to be more feminine. When one of them tried to wrap its hands around Parker’s neck, his natural response of fear oddly subsided.

“I think they injected us with something to calm us. I was kind of numb and went along with the program.”

Parker alleged that he and Hickson were taken aboard the alien vessel and experimented on; afterward, the two terrified fishermen found themselves back on the riverbank as though nothing had happened. They drove to the Jackson County Sheriff’s Office and told Captain Glenn Ryder and Sheriff Fred Diamond the entire story.

“When I got in there they had me,” Hickson told the police. “There were no seats, no chain, they just moved me around. I couldn’t resist them. I just floated, felt no sensation, no pain. They kept me in that position a little while, then they’d raise me back up.”

A 2018 Sun Herald interview with Calvin Parker who describes the incident from the banks of the Pascagoula River.

Hickson claimed that a machine resembling a giant eye looked over his entire body. He said he was surrounded by inhuman, five-foot tall monopedal beings.

Capt. Ryder didn’t believe the two men. He stepped out of the interrogation room but left a secret recording device running in hopes of obtaining proof that their alien stories were fabricated. But what he later heard on this recording made him think twice:

“Jesus Christ, God have mercy, I thought I’d been through enough of Hell on this earth and now I’ve got to go through something like this,” said Hickson to Parker. “But they could have, you know, I guess they, well, they could have harmed us, son. They had use. They could have done anything to us.”

“I just want to cry right now,” added Parker. “What’s so damn bad about it is nobody’s going to believe us.”

With no physical evidence of their abduction, the alien story remain a mystery. Parker stayed quiet about the event for decades, but after Hickson’s death in 2011, he wrote a 2018 book on the matter. Its publication prompted others to come forward — claiming that they, too, had seen a UFO that night.

“It makes me feel pretty good I’m not the only one who saw something,” he said. “Most of these people are credible people.”