It has been 15 years since researchers last spotted a rose-breasted grosbeak like this one.

All About Birds/Powdermill Nature ReserveA half-male half-female rose-breasted grosbeak (center) was encountered for the first time in 15 years at a Pennsylvania reserve.

While Annie Lindsay’s team of bird researchers was banding the avians at the Powdermill Nature Reserve in Pennsylvania in order to track them, they came across a “once-in-a-lifetime” find: a rose-breasted grosbeak that was female on one side and male on the other.

“It was spectacular,” Lindsay gushed.

According to local radio outlet WESA, the rare bird is a gynandromorph, which means that it is part male and part female. This particular grosbeak is male on the right side and female on the left, which makes it a bilateral gynandromorph.

The fact that the bird was a gynandromorph was obvious to researchers from the get-go: on its right side, it had ruby wing pits and a ruby breast spot along with black wing feathers, typical traits of male grosbeaks. But on its left side, the bird also possessed yellow wing pits and a brownish wing as female grosbeaks typically do.

The bird’s eye-catching coloring made it clear that it was different. Although half-male and half-female birds are not unusual in nature — gynandromorphs are also found in many species of insects and crustaceans as well — like most fascinating phenomena of the wild, they are rarely captured by the scientists who study them.

As such, discovering the gynandromorph rose-breasted grosbeak at the reserve was quite the thrill to researchers, who then shared it on the official TikTok page for the Carnegie Museum of Natural History:

This is one of fewer than 10 bilateral gynandromorphs recorded in Powdermill’s 64 year history of bird banding! #tiktokpartner #learnontiktok

“One [of the banding team members] described it as ‘seeing a unicorn’ and another described the adrenaline rush of seeing something so remarkable,” Lindsay, the bird banding program manager at the reserve, said in a statement.

Lindsay added that the team was “incredibly grateful to be part of such a noteworthy and interesting banding record.”

Gynandromorphism in birds occurs when two sperm fertilize an egg that has two nuclei instead of one, which allows it to develop both sets of sex chromosomes on either side. This results in a bird with male characteristics and sex organs on one half of its body and an ovary and other female characteristics on the other half.

Gynandromorphs are not like hermaphrodites, however, which also have genitals of both sexes, because they are also completely male on one side and totally female on the other. Scientists do not know whether gynandromorphs behave more like one sex or if they can successfully reproduce.

But there is hope, as banding this half-male half-female grosbeak will allow researchers to study its behavior. The researchers suspect that the bird may be able to produce either eggs or inseminate a mate. 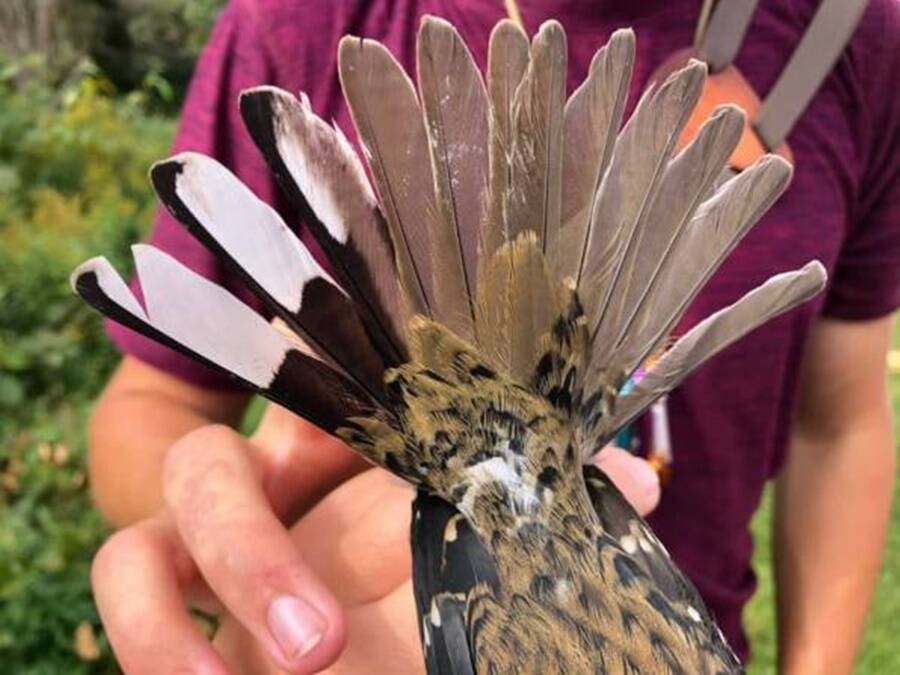 Annie Lindsay/Powdermill Nature ReserveThe black and white feathers on the right side of the bird’s tail are indicative of a male.

Researchers also want to study how the bird attracts potential mates in the first place. “If that bird sings like a male, it would be potentially trying to attract females, and also eliciting a territorial response from other males, essentially saying ‘keep away, this is my spot,'” Lindsay said. “And territorial males will either respect that or it would be more of an aggressive response, not a great mating response.”

After collecting a few samples and recording a quick video for social media, the half-male half-female rose-breasted grosbeak was released so that it could join in the fall migration.

This isn’t the first time such a bird has been seen in Pennsylvania. Just last year, a couple of recreational birdwatchers came across a half-male and half-female cardinal in Eerie.

While there is so much that the researchers have yet to learn about the unique little bird, the fact that they had the chance to observe it up close was remarkable in itself.

“You know, the science is important,” Linsday said, “but awe and wonder are important, as well.”

After this look at the rare half-male half-female bird that was found in Pennsylvania, meet the white bellbird, the loudest bird in the world that belts out a “deafening” scream in front of potential mates. Then, dive into the bizarre case of dozens of dead birds found mysteriously bleeding out of their eyes in Australia.