The bizarre choreography makes the tune even stranger: The male bird faces away from the female until the loudest final note. 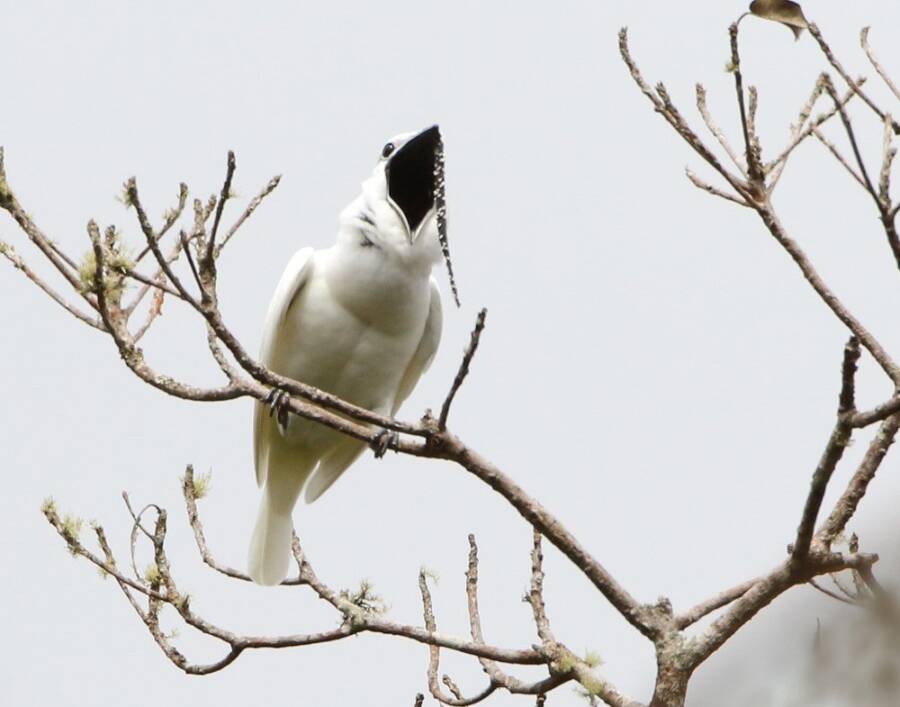 Anselmo d’AffonsecaThe white bellbird produces a song as loud as 125.4 decibels, far beyond the safety level for humans (85 decibels).

Every species approaches sexual selection differently. The term “peacocking,” for instance, is directly tied to that animal’s penchant for showing off its beautiful colors. For the white bellbird, it seems that screaming directly into a potential parter’s face is the go-to strategy.

Unfortunately for the pursued, this species produces the loudest birdsong ever recorded. In fact, these barrel-chested rainforest birds produce a sound so “deafening” when they sing together that it sounds like “several blacksmiths trying to compete.”

That description comes from a New York Times interview with Arthur Gomes, a biology student at São Paulo State University in Brazil who contributed to new research published in the journal Current Biology.

Brazilian bird expert Caio Brito described the birds’ ear-splitting song as a “strange, metallic, kind of alien call.” At 125.4 decibels (db), the noise is louder than a chainsaw or a rock concert.

That’s far beyond the safety level of 85 db for human ears, and about as loud as a police siren.

The white bellbird belting its mating call out, courtesy of The Guardian.

“While watching white bellbirds, we were lucky enough to see females join males on their display perches,” biologist Jeff Podos from the University of Massachusetts, Amherst <a href="http://said in a press release. “In these cases, we saw that the males sing only their loudest songs.”

“Not only that, they swivel dramatically during these songs, so as to blast the song’s final note directly at the females.”

The white bellbird, or Procnias albus, clearly has no time for subtlety; gone is the gradual wooing. As for how the females can stand this unbearable affront to their hearing, that question is still on the table.

“We would love to know why females willingly stay so close to males as they sing so loudly,” said Podos. “Maybe they are trying to assess males up close, though at the risk of some damage to their hearing systems.”

Co-author of the new study and curator of birds at the National Institute of Amazonian Research in Brazil, Mario Cohn-Haft, calls the white bellbird song “the soundtrack of the mountain….You can hear them from a mile away.” 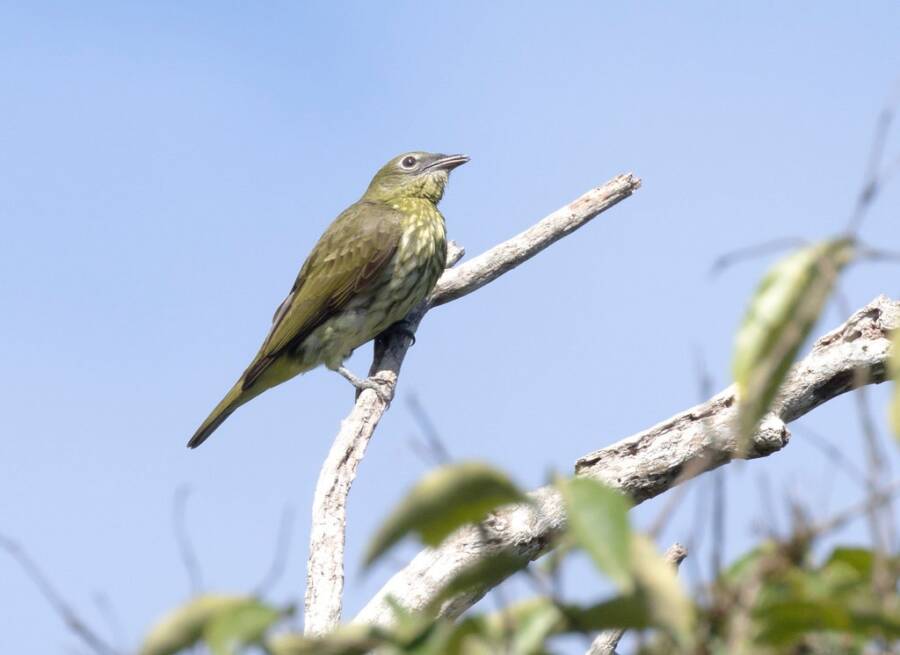 Anselmo d’AffonsecaIt’s unclear how the female bellbirds feel about this aggressive mating strategy.

It was on a 2017 trip to northeast Brazil’s Serra do Apiaú peak, that he noticed how robust the animal’s abdominal wall really was. They had “this really ripped, washboard stomach,” he said. “If they didn’t have that kind of protection, their guts would blow out.”

When Cohn-Haft shared his photos with Podos, the two joined forces and led a team to study the animal more closely the following year. According to Podos, only a couple dozen species of birds have had their songs properly measured.

But with recent technological advances, making those measurements has become much easier. Using sound level meters and laser range-finders, the scientists not only monitored the birds’ songs, but also measured where and how far away those songs came from.

They recorded two varying vocalizations: a longer, more complex tune, and a shorter, louder one. The second one was louder than a jackhammer, and “at its peak, the amplitude of a pile driver” at about 125 decibels. That’s three times louder than the previous record-holder, the screaming piha.

The shorter call being the louder one is in keeping with “a pattern of evolutionary trade-offs between sound amplitude and song complexity,” said Gonçalo Cardoso, a researcher at the University of Porto.

In other words, “If sexual selection keeps pushing the song to be louder and louder, it’s going to become shorter and shorter,” said Podos.

Anselmo d’AffonsecaWhen several white bellbirds sing at once, it apparently sounds like a group of competing blacksmiths.

What remains most peculiar is the white bellbird’s choreography: Why does it face away while singing its tune, only to whip around to roar the loudest note directly into the pursued bird’s face?

“I am surprised that the loudest bird makes loud sounds when the female is so close,” said Nicole Creanza, an assistant professor at Vanderbilt University.

Podos, too, admitted that the strange approach “goes against expectations….They just really seem to be socially awkward.”

Podos and his team never observed this seemingly flirtatious song lead to procreation, however. It’s quite possible that they merely saw male birds scream into female birds’ faces with no consequence.

“We never saw copulation — we never saw what a really good male does,” he said. “The ones we saw might have just been losers.”

After learning about how the loudest bird in the world screams in the faces of potential partners, watch the first-ever video of the bizarre mating rituals of anglerfish. Then, learn about the surprising way male cockatoos attract mates.