8,000-Year-Old Pink Pearl, The Oldest Ever Discovered, To Be Unveiled In Abu Dhabi

Archaeologists discovered the pink-tinted pearl inside the room of an ancient structure being dug out on Marawah Island, off the coast of the United Arab Emirates. 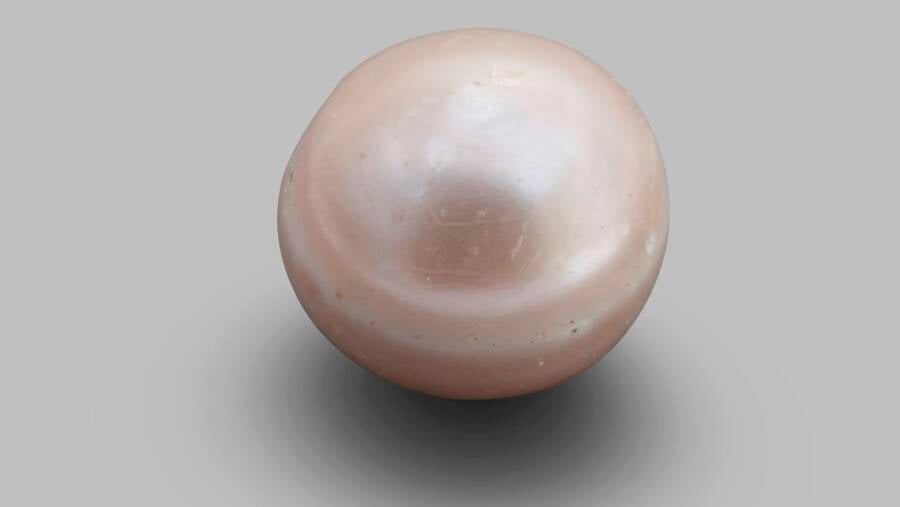 Abu Dhabi Department of Culture and TourismDubbed the ‘Abu Dhabi Pearl,’ the 8,000-year-old treasure will soon be on display for the public.

A tiny yet valuable discovery was made at an archaeological site off the coast of Abu Dhabi and will soon be on display to the public: An 8,000-year-old pearl that is believed to be the oldest ever found.

CNN reported that the ancient pearl was uncovered at a dig site on Marawah Island, not far from Abu Dhabi. Archaeologists found the priceless piece of treasure inside a room of a structure they were excavating on the island. They determined that the pearl was formed sometime between 5800 B.C. and 5600 B.C. through radiocarbon dating.

“The presence of pearls at archaeological sites is evidence that the pearl trade existed from at least as far back as the Neolithic period,” said Abdulla Khalfan al-Kaabi, the director of the Archaeological Survey Unit under the United Arab Emirates’ Department of Culture and Tourism (DCT).

The discovery of the ancient pearl not only proves the longevity of the pearl trade, but it also aligns with historical records suggesting Abu Dhabi was a known trading hub for the commodity in the 16th century.

The oldest known natural pearl in the world has been discovered by DCT archaeologists working at a Neolithic site on Marawah Island. The 8,000-year-old ‘Abu Dhabi Pearl’ will feature in the upcoming @louvreabudhabi exhibition 10,000 Years of Luxury pic.twitter.com/Kd3jHHCVCT

According to a press release from the DCT, a Venetian jewel merchant named Gasparo Balbi traveled through the region during that time and mentioned the islands off the area’s coastal shores as a primary source to sell and buy pearls.

“The Abu Dhabi Pearl is a stunning find, testimony to the ancient origins of our engagement with the sea,” said DCT Chairman Mohamed Khalifa Al Mubarak. “The discovery of the oldest pearl in the world in Abu Dhabi makes it clear that so much of our recent economic and cultural history has deep roots that stretch back to the dawn of prehistory.”

At the archaeological site of Marawah Island, researchers also found a bounty of bones stemming from marine animals like fish, turtles, dugong, and dolphins.

“We arrived at the conclusion that people of this period were very familiar with the sea and considered it a major part of daily life,” al-Kaabi explained in a video tweeted out by the DCT. “Perhaps pearls were part of the bartering process with other civilizations.”

Historically, pearling crews would dive in the shallow Persian Gulf to harvest oysters and ultimately obtain the precious pearls inside them. The pearling industry was a big part of the local economy, but by the 1900s, it began to decline following competing production from Japanese oyster farmers. 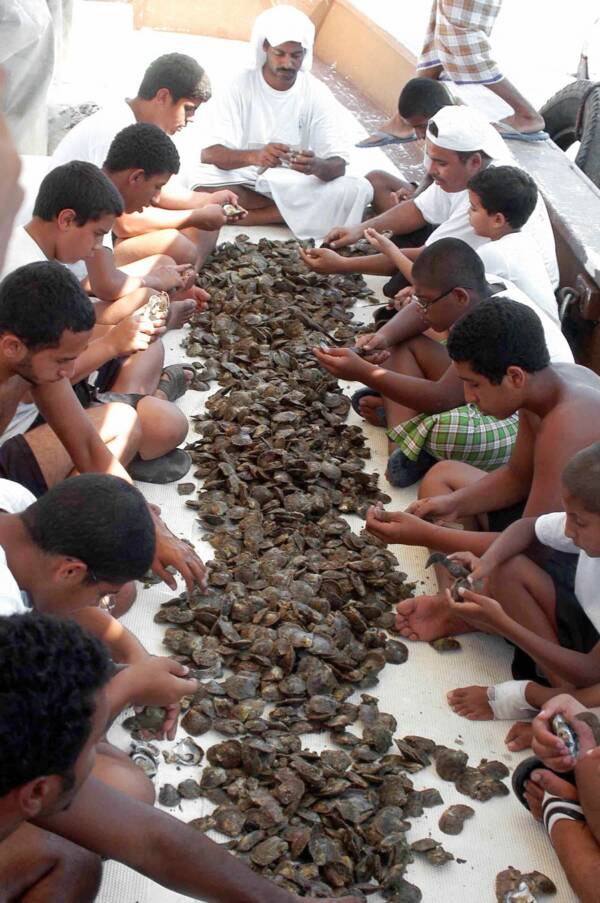 Yasser Al-Zayyat/AFP via Getty ImagesSome places in the Middle East still hold annual pearl dives to honor the ancient tradition. Here, Kuwaiti divers look for pearls in shells they picked in the port of Khairan.

Despite its old age, the 8,000-year-old pearl measures under an inch and remains a sight to behold with its perfect complexion and soft pink hue.

The pearl’s good condition makes it a fitting addition to the upcoming exhibition at the Louvre Abu Dhabi. Aptly titled 10,000 Years of Luxury, the exhibit “celebrates a world history of the lavish and the luxurious through 350 extraordinary objects” spanning different cultures and ancient civilizations. It is set to open its doors to the public at the end of this month.

The display will be a unique and wide-ranging mix between precious artifacts and modern luxuries. A Mamluk carpet from Egypt dating back to the 15th Century, for example, will be shown side-by-side with an hourglass piece created by Australian designer Marc Newson. The exhibit will also include vintage and modern creations by high-end fashion designers today, such as Balenciaga, Chanel, and Dior.

“Luxury is everywhere in our world today — surrounding us in objects, images and language,” Olivier Gabet, the director of Musée des Arts Décoratifs, one of the partnering institutions organizing this event, told according to the Khaleej Times. “This exhibition… will offer a new way of understanding the notion of luxury and its historical roots.”

Now that you’ve learned about the oldest pearl in the world, take a look at the extraterrestrial mineral that’s harder than diamond. Then, check out the oldest fossils ever discovered by archaeologists.