Several products including images of Auschwitz were taken down by Amazon after the items were called out by the Auschwitz-Birkenau Memorial and Museum. 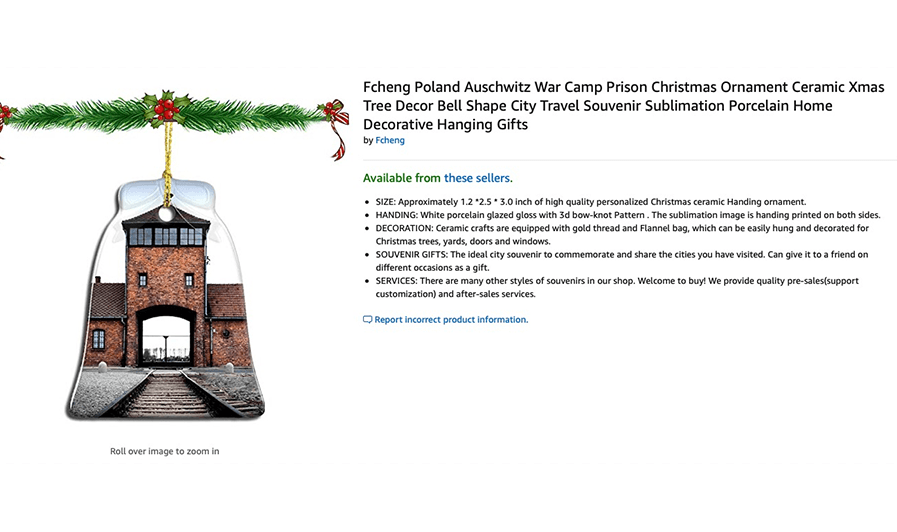 AmazonOne of several recent listings on Amazon for products featuring images of the Auschwitz concentration camp.

In the latest controversy to hit online shopping behemoth Amazon, various products — including Christmas ornaments — that were adorned with images of the infamous Nazi death camp Auschwitz were discovered on the site after being listed for sale by a third-party vendor.

According to The New York Times, the disturbing merchandise was first discovered by the Auschwitz-Birkenau Memorial and Museum in Poland, which shared images of the products to their 784,000-plus followers on Twitter. The merchandise in question included Christmas ornaments, a mouse pad, and a bottle opener emblazoned with photographs of Auschwitz.

Over the weekend, the museum called out the shocking discovery, saying that the products were inappropriate and disrespectful. Once the images of the listings were shared online, there was a swift public backlash against Amazon as angry users flooded the site’s reporting system with complaints about the products.

By late Sunday evening, the products featuring images of the concentration camp — where a million Jews are estimated to have been killed — were no longer available on the website.

“Thank you to those who reacted, reported and put pressure here,” the memorial tweeted in response to the products’ removal. After Amazon removed the products from the site, a company spokeswoman said that “all sellers must follow our selling guidelines and those who do not will be subject to action, including potential removal of their account.”

Selling "Christmas ornaments" with images of Auschwitz does not seem appropriate. Auschwitz on a bottle opener is rather disturbing and disrespectful. We ask @amazon to remove the items of those suppliers. https://t.co/0uG2JG558e pic.twitter.com/ucZoTWPk1W

According to Amazon’s policy on offensive and controversial materials, products “related to human tragedies” are prohibited. The company also determines which products are appropriate to be sold on its platform by considering a “global community of customers and cultural differences and sensitivities.” Books, music, videos, and DVDs are not covered by the prohibition.

The products featuring the images of Auschwitz — which received more than two million visitors in 2017 — appeared on the products page of a seller offering ornaments with other popular tourist destinations around the world. Some users have pointed out the Auschwitz products might have been the unfortunate result of an automatic algorithm that transfers photos of these tourist sites onto various products.

Regardless, the fact that Amazon wasn’t able to identify the inappropriate content of the products sooner has spurred criticism against the company’s product review procedure.

The company relies on computer algorithms to scan through the website’s offerings for any items that might violate company policies. The items are then usually reviewed by Amazon employees to determine whether the products in question should be removed.

But the sheer number of products being sold on the website can make reviewing every item that shows up on the platform an enormous challenge. It’s estimated there are more than three billion products sold across all of Amazon’s online marketplaces. 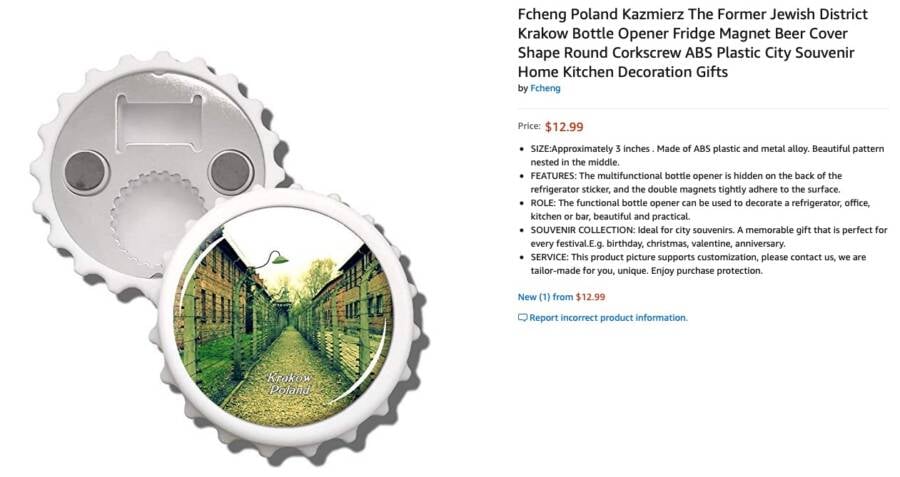 Auschwitz Memorial/TwitterA bottle opener brandishing a photo of Auschwitz, where a million Jews were killed, was being sold for $12.99.

Chris McCabe, the founder of marketplace consulting firm ecommerceChris and a former Amazon employee, believes the company’s resources have been stretched too thin to review the products on its website quickly enough.

“I don’t think it is, for example, a technical error,” McCabe said. “I think they were flagged. They just weren’t reviewed in a timely manner.” McCabe also noted that the repeat of such cases is a sign of the company’s reactive approach rather than it being proactive on the matter.

The controversy over the Auschwitz-adorned items is just one of many examples that point to the company’s lack of adequate oversight of third-party sellers and the kinds of products that they put up on its platform for sale. Altogether, these products account for about half of all merchandise sold on the site.

In July of last year, a pair of nonprofits — the Partnership for Working Families and the Action Center on Race and the Economy — put out a report revealing how Nazi-themed children’s items were being sold through Amazon’s third-party system, including items like action figures and onesies.

The report stated that Amazon’s policies for filtering out such products are “weak and inadequately enforced” and allows hate groups to “generate revenue, propagate their ideas and grow their movements.”

But the sales of items that contain harmful, disturbing, and even dangerous content isn’t just an issue for Amazon. Several hours after Amazon’s controversy appeared to have been resolved, the memorial tweeted out more Christmas products with Auschwitz images on them — this time on Wish, another online marketplace similar to Amazon.

"Christmas ornaments" with images from Auschwitz are also available on @WishShopping. We hope that their reaction will be similar to #Amazon and such project will be quickly removed too. https://t.co/a8dynuU6ji pic.twitter.com/mcWCbA5B4g

“We hope that their reaction will be similar to #Amazon and such [products] will be quickly removed too,” the memorial wrote on its Twitter account.

Now that you’ve learned about the controversy surrounding products brandishing images of the Auschwitz Nazi death camp on Amazon, take a look at the database that’s identified 8,500 of the killer camp guards at Auschwitz. Next, gawk at these sexist, offensive, and just plain weird Christmas ads from way back when.