Decades after Amelia Earhart disappeared somewhere over the Pacific Ocean in 1937, we still don't know what happened to this trailblazing female pilot.

When Amelia Earhart set off from Oakland, California, on March 17, 1937, in a Lockheed Electra 10E plane, it was with great fanfare. The trailblazing female pilot had already set several aviation records, and she was looking to set another by becoming the first woman to fly around the world. Ultimately, however, Amelia Earhart died tragically during her attempt.

After taking off on that fateful day, Earhart and her navigator, Fred Noonan, seemed poised to make history. Despite encountering some serious issues during the first part of their journey — which required their plane to be rebuilt — their second takeoff on May 20, 1937, appeared to have been going much more smoothly.

From California, they flew to Florida before making several stops in South America, Africa, and Asia. But something went wrong a little over a month into the journey. Then, on July 2, 1937, Earhart and Noonan took off from Lae in New Guinea. With just 7,000 miles between them and their goal, they planned to stop at the isolated Howland Island in the Pacific for fuel.

They never made it there. Instead, Amelia Earhart, Fred Noonan, and their plane vanished forever. Had they, as an official report later found, run out of fuel, crashed into the ocean, and drowned? But is there more to the story of Amelia Earhart’s death?

In the decades since then, other theories have emerged about how Amelia Earhart died. Some claim that Earhart and Noonan briefly survived as castaways on another remote island. Others suspect that they were captured by the Japanese. And at least one theory states that Earhart and Noonan, secretly spies, somehow made it back alive to the United States, where they lived out the rest of their days under assumed names.

Go inside the baffling mystery of the disappearance and death of Amelia Earhart — and why we still don’t know what happened to her. 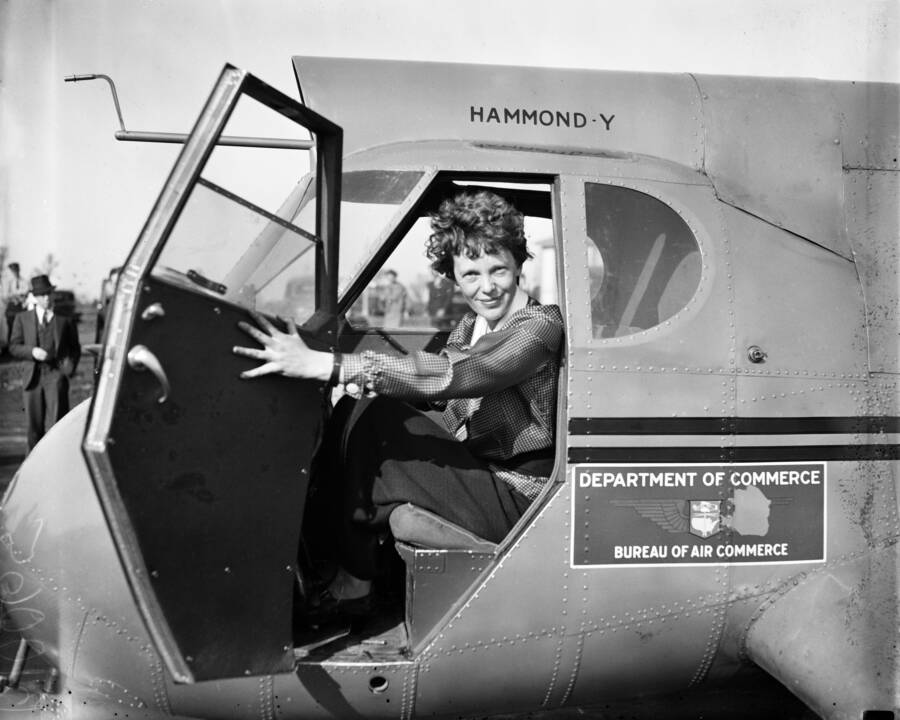 Library of Congress/Getty ImagesAmelia Earhart, pictured with one of her planes. Circa 1936.

About 40 years before she disappeared somewhere over the Pacific Ocean, Amelia Mary Earhart was born on July 24, 1897, in Atchison, Kansas. Though she was drawn to adventurous hobbies like hunting, sledding, and climbing trees, Earhart was not, according to PBS, always fascinated by airplanes.

“It was a thing of rusty wire and wood and looked not at all interesting,” Earhart recalled of the first plane she saw at the Iowa State Fair in 1908.

But she changed her tune 12 years later. Then, in 1920, Earhart attended an air show on Long Beach and got to fly with a pilot. “By the time I had got two or three hundred feet off the ground,” she recalled, “I knew I had to fly.”

And fly she did. Earhart started taking flying lessons and, within six months, used her savings from working odd jobs to buy her own airplane in 1921. She proudly named the yellow, secondhand Kinner Airster the “Canary.”

Then, after landing in a field in Ireland on May 21, 1932, a farmer asked if she’d flown far. Earhart famously replied, “From America” — and she had a copy of a day-old newspaper to prove her incredible accomplishment.

Earhart’s exploits had earned her admiration, lucrative endorsements, and even an invitation to the White House. But the famous pilot wanted something bigger. In 1937, Earhart set out to circumnavigate the globe.

But the trip didn’t establish Earhart’s legacy as an aviator as she may have hoped. Instead, it cast her as the central character in one of the greatest mysteries of the 20th century: What happened to Amelia Earhart after she disappeared, and how did Amelia Earhart die? Nearly a century later, these intriguing questions still don’t have any clear answers.

The Fateful Journey That Ended With Amelia Earhart’s Death 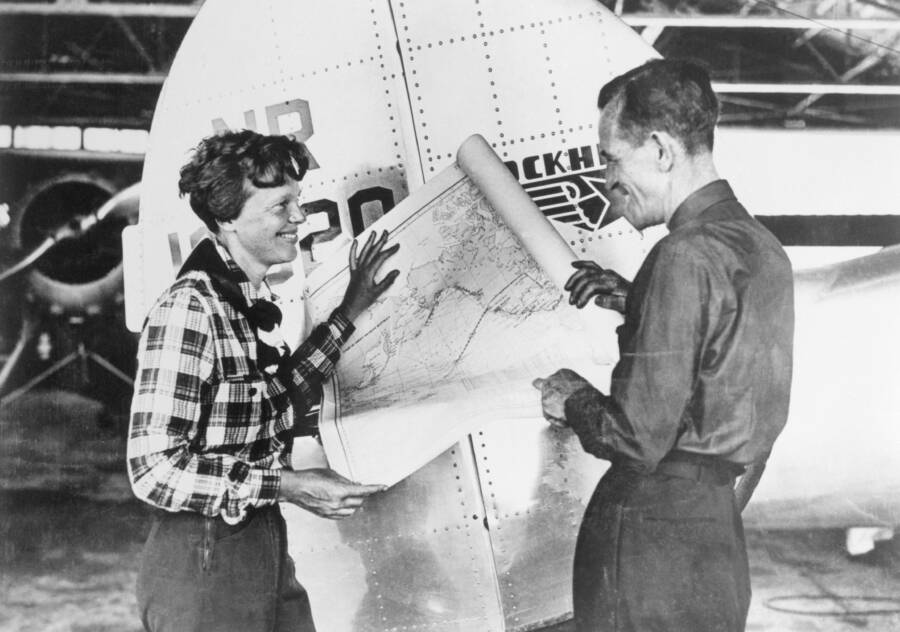 Bettmann/Getty ImagesAmelia Earhart and her navigator, Fred Noonan, with a map of the Pacific that shows their doomed flight route.

Despite all the fanfare, the trip that culminated in Amelia Earhart’s death got off to a rocky start. According to NASA, she originally planned to fly east to west. She took off from Oakland, California, to Honolulu, Hawaii, on March 17, 1937. Her flight was also supposed to include three other crewmembers: navigator Fred Noonan, Captain Harry Manning, and stunt pilot Paul Mantz.

But when the crew attempted to leave Honolulu to continue the journey three days later, technical problems caused the trip to be aborted almost instantly. The Lockheed Electra 10E plane ground-looped during takeoff — and the aircraft needed to be repaired before it could be used again.

By the time the plane was ready for use, Manning and Mantz had dropped out of the flight, leaving Earhart and Noonan as the only crewmembers. On May 20, 1937, the pair took off again from Oakland, California. But this time, they flew west to east, landing in Miami, Florida, for their first stop.

From there, the trip seemed to go well. As Earhart flew from South America to Africa to South Asia, she sent occasional dispatches to American newspapers, describing her adventures with Noonan in foreign lands.

“We were thankful we had been able to make our way successfully over those remote regions of sea and jungle — strangers in a strange land,” she wrote from Lae in New Guinea on June 29, 1937, according to StoryMaps. 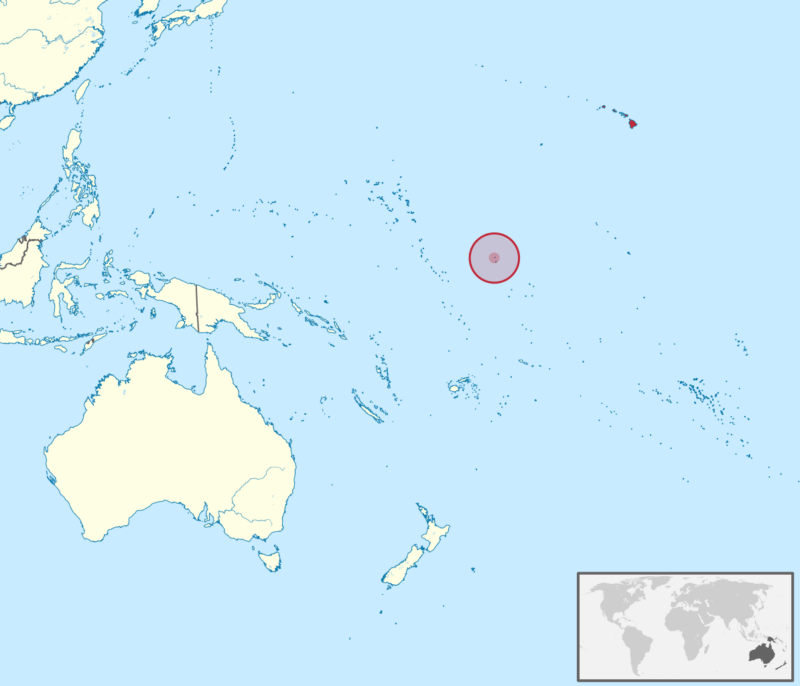 Wikimedia CommonsHowland Island was supposed to be one of the last stops on Amelia Earhart and Fred Noonan’s voyage.

Three days later, on July 2, 1937, Earhart and Noonan left New Guinea for the isolated Howland Island in the Pacific. It was supposed to be one of their last stops before they reached the mainland United States. With 22,000 miles of the journey completed, just 7,000 miles lay between them and the end of their goal. But Earhart and Noonan never made it.

At around 7:42 a.m. local time, Earhart radioed the Coast Guard cutter Itasca. According to NBC News, the ship was waiting at Howland Island to offer support to Earhart and Noonan during the last part of their journey.

“We must be on you, but cannot see you — but gas is running low,” Earhart said. “Have been unable to reach you by radio. We are flying at 1,000 feet.”

The cutter, which, according to PBS, was unable to send a message back to her, heard from Earhart just one more time about an hour later.

Then, the Itasca lost contact with Amelia Earhart forever.

What Happened To Amelia Earhart? 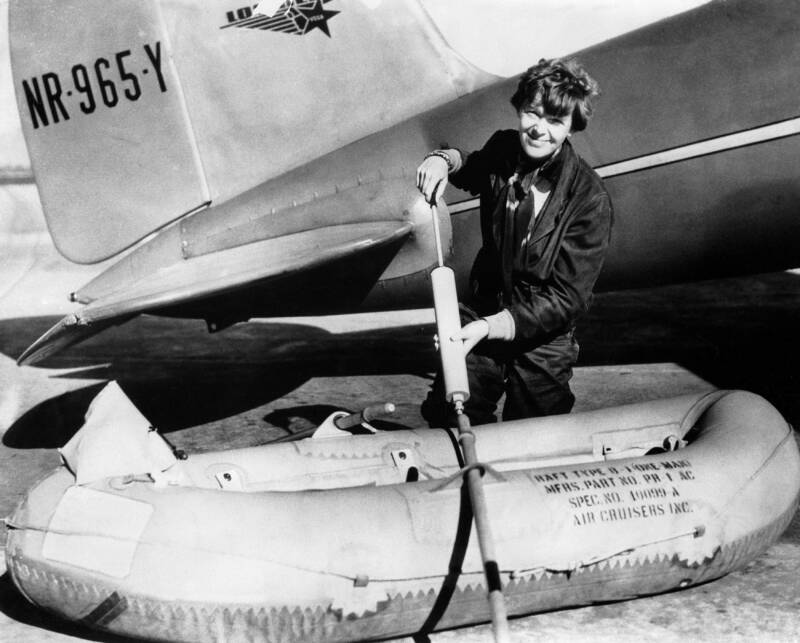 Keystone-France/Gamma-Keystone via Getty ImagesAmelia Earhart shown “testing” her lifeboat before her doomed flight that likely led to her death.

Following the disappearance of Amelia Earhart in July 1937, President Franklin Roosevelt ordered a massive search that covered 250,000 square miles of the Pacific. Earhart’s husband, George Putnam, also financed his own search. But neither found a sign of the pilot or her navigator.

According to History, the U.S. Navy’s official conclusion was that 39-year-old Earhart had run out of fuel while searching for Howland Island, crashed her plane somewhere in the Pacific, and drowned. And after 18 months of searching, the legal declaration of Amelia Earhart’s death finally came through.

But not everyone buys that Earhart crashed her plane and died instantly. Over the years, other theories have emerged about Amelia Earhart’s death.

The first is that Earhart and Noonan managed to land their plane on Nikumaroro (previously known as Gardner Island), a remote atoll about 350 nautical miles away from Howland Island. According to the International Group for Historic Aircraft Recovery (TIGHAR), Earhart left evidence of this in her last transmission when she told the Itasca: “We are on the line 157 337.”

According to National Geographic, Earhart meant that they were flying on a navigational line that intersected with Howland Island. But if she and Noonan overshot it, they might have ended up at Nikumaroro instead.

Compellingly, subsequent visits to the island have turned up men’s and women’s shoes, human bones (which have since been lost), and 1930s-era glass bottles, including one that might have once contained freckle cream. And TIGHAR believes that several garbled radio messages heard by Americans and Australians could have been Earhart calling for help. “Will have to get out of here,” one message said, according to a woman in Kentucky who picked it up on her radio. “We can’t stay here long.”

While some who believe in the Nikumaroro theory say that Amelia Earhart died of starvation and dehydration, others think she had a far more horrific fate as a castaway: being eaten by coconut crabs. After all, the skeleton that may have belonged to her on Nikumaroro was notably fractured. If she had been wounded, dying, or already dead on the beach, her blood may have attracted the hungry creatures from their underground burrows.

Another grim theory about what happened to Amelia Earhart involves a different remote place — the Japanese-controlled Marshall Islands. According to this theory, Earhart and Noonan landed there and were captured by the Japanese. But while some say they were tortured and killed, others claim that their capture was all part of a U.S. government plot and that the Americans used a rescue mission as a way to spy on the Japanese.

This version of the theory also states that Earhart and Noonan then returned to the United States and lived under assumed names. But naysayers point out that Earhart was running low on fuel when she vanished — and the Marshall Islands were 800 miles away from her last known location.

Years later, no one knows for sure if Amelia Earhart died as the U.S. Navy claimed or if she and Fred Noonan managed to survive for days or even weeks on an isolated island in the middle of the Pacific Ocean.

The Legacy Of Earhart’s Disappearance And Death Today 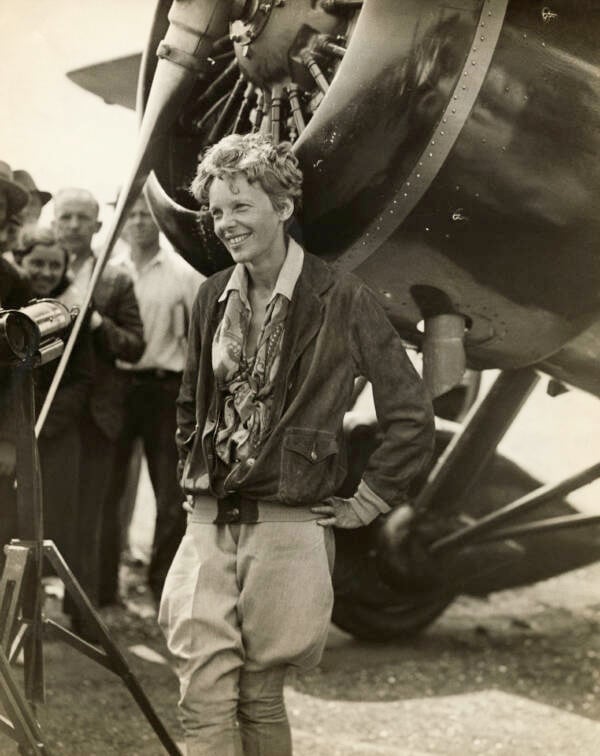 Bettman/Getty ImagesThe mystery of Amelia Earhart’s death endures to this day, as does her legacy as a pilot.

Amelia Earhart and Fred Noonan were the only two people who knew for sure what happened on July 2, 1937. Today, the rest of us are left to wonder about the true story behind Amelia Earhart’s death.

Did they run out of fuel and crash into the ocean? Did they manage to survive on some isolated island, sending out desperate messages that no one seemed to hear? Or were they part of a larger government plot that ensured their safe and discreet passage back to the United States?

Whatever their fate, Amelia Earhart’s death is just one part of her larger story. In her life, she shattered expectations through her many feats as an aviator. For Earhart was not just a female pilot but a phenomenal one.

Though her name may be synonymous with an eerie mystery today, Amelia Earhart was so much more than what happened to her on her final flight. Her legacy also includes her incredible accomplishments as a pilot. In her life, she set out to accomplish daring tasks like flying across the Atlantic Ocean at a time when most Americans had never flown in a plane.

The baffling story of Amelia Earhart’s disappearance and death may be one reason why her legacy has endured for almost a century. But even if none of that had happened, Earhart had still accomplished plenty during her life to earn herself a prime spot in American history — and there’s no question that she would have done even more remarkable things had she survived.

After reading about how Amelia Earhart died, learn about the lives of seven other fearless female aviators. Then, discover the fascinating story of Bessie Coleman, America’s first Black female pilot.