Why The Coconut Crab Is The Crustacean Of Your Worst Nightmares

Also known as the robber crab and terrestrial hermit crab, the Indo-Pacific coconut crab reigns supreme as the largest arthropod on Earth.

“Monstrous.” That was the only word Charles Darwin could find to describe the coconut crab when he first saw one for himself.

Of course, anyone who’s ever seen this animal can tell right away that it’s no ordinary crustacean. As the largest land crab in the world, the coconut crab’s size alone is intimidating. It weighs up to nine pounds, stretches three feet long, and can carry more than six times its own body weight. 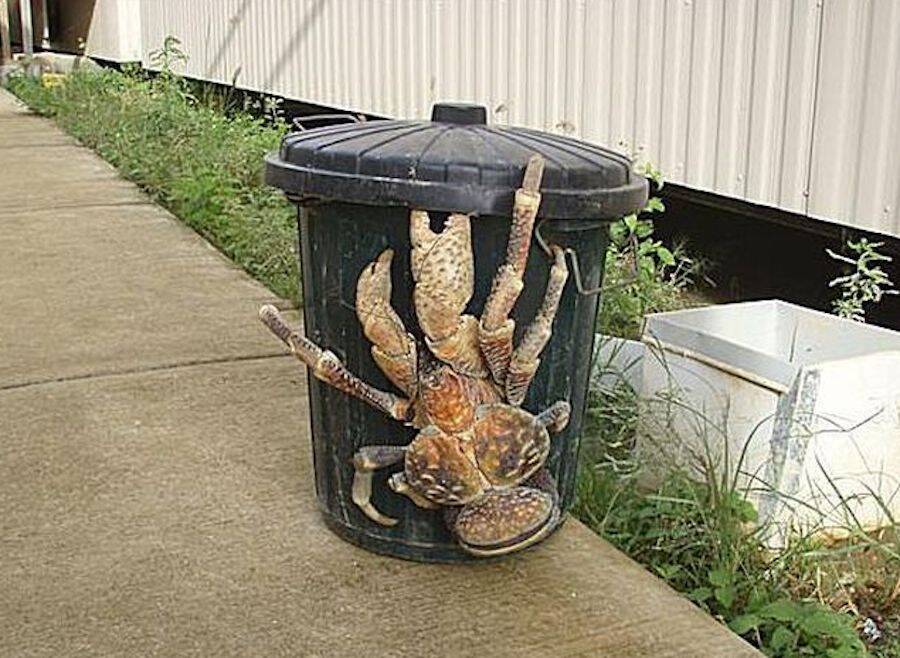 Epic Wildlife/YouTubeA coconut crab, also known as a robber crab, climbs a trash can in search of something to eat.

Back in Darwin’s time, many ominous tales spread about coconut crabs.

Some told stories about them climbing a tree and dangling from it for hours — holding on with nothing more than a single pincer. Others claimed that their claws could break through a coconut. And some believed that they could tear a human being apart, limb from limb.

Ever skeptical, Darwin didn’t believe most of what he’d heard. But eerily, none of it was really an exaggeration. Since then, we’ve found out that every story about what a coconut crab can do is more or less true.

Why The Coconut Crab Is So Powerful 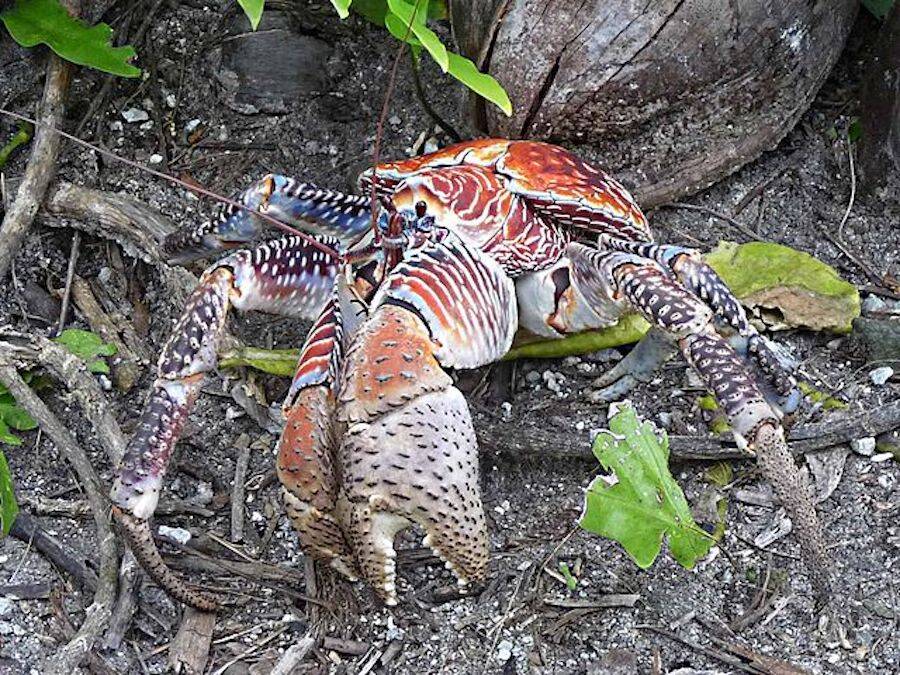 Wikimedia CommonsThose who have been pinched by a coconut crab say it hurts like “eternal hell.”

The coconut crab — sometimes called a robber crab — boasts powerful pincers, which are some of the most dangerous weapons in the animal kingdom. Experts say a pinch from this crab can rival a lion’s bite. So there’s no question that they can do some terrifying things with their claws.

But the good news for humans is that the crabs don’t usually use their claws on us. As the name suggests, the coconut crab’s main source of food is coconuts. And since most of these creatures live on islands in the Pacific and Indian Oceans, they usually have no trouble finding their favorite food.

Still, it’s a bit unnerving to watch a coconut crab break open a coconut with nothing more than its bare claws. It’s even more unsettling when you learn that coconuts aren’t the only things that they can tear apart.

As omnivorous creatures, coconut crabs are willing to eat both plants and animals. They’ve been known to kill birds, feast on kittens, and rip apart pig carcasses. Eerily, they’ve also been known to practice cannibalism — and they will rarely hesitate to eat other coconut crabs.

In short, almost nothing is off the menu for a robber crab. They’ll even eat their own exoskeletons. Like most crabs, they shed their exoskeletons to grow new ones. But when their old, molted shell falls off, they don’t leave it behind in the wild like other crabs. Instead, they eat the whole thing.

How The Robber Crab Gets Its Food 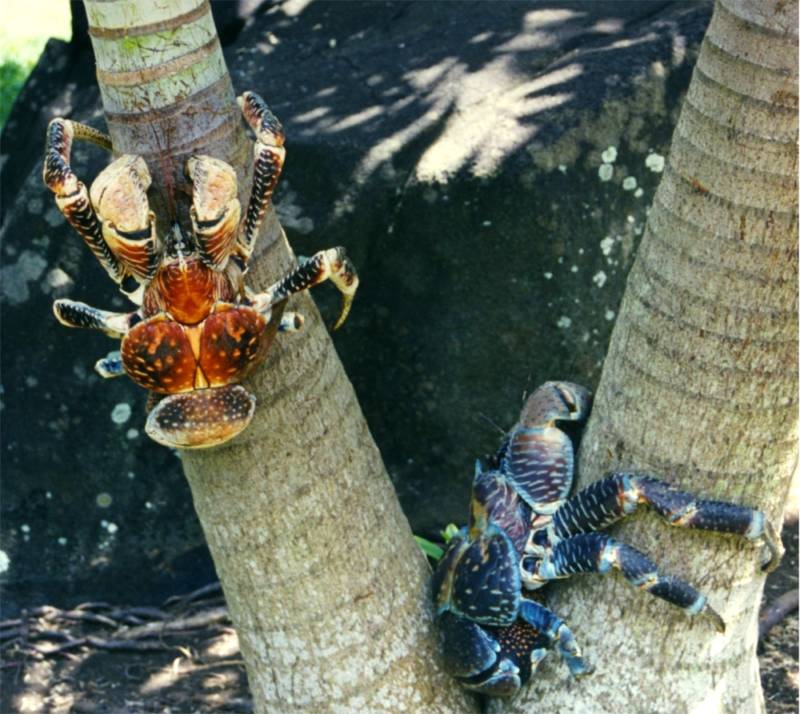 Thanks to their strong pincers, these crustaceans can climb just about anything they see — from the branches of a tree to the chains of a fence. Despite the coconut crab’s size, it can hang off an object for hours.

This is one of the main ways they get their food — especially their beloved coconuts. By climbing to the tops of coconut trees and knocking the fruit off, they can treat themselves to a nice meal once they climb down.

But as one might expect, they don’t just climb trees to get coconuts. They also scale branches to hunt for birds — attacking them at the top of the tree and then dragging them down to the burrows where they live.

In 2017, scientist Mark Laidre described their attack strategy in horrific detail. It was on an island where the birds stayed at the very tops of the trees to avoid coconut crabs. However, they weren’t always able to escape.

“In the middle of the night, I observed a coconut crab attack and kill an adult red-footed booby,” said Laidre, a biologist who has studied the crustacean. “The booby had been sleeping on a low-lying branch, less than a meter up the tree. The crab slowly climbed up and grabbed the booby’s wing with its claw, breaking the bone and causing the booby to fall to the ground.”

But the robber crab wasn’t quite done torturing its prey yet. “The crab then approached the bird, grabbing and breaking its other wing,” Laidre continued. “No matter how much the booby struggled or pecked at the hard shell of the crab, it couldn’t get it to let go.”

Then, the swarm came. “Five more coconut crabs came to the site within 20 minutes, likely cueing in on the blood,” Laidre recalled. “As the booby lay paralyzed, the crabs fought, eventually tearing the bird apart.”

All the crabs then took a hunk of meat from the mutilated bird’s body — and quickly carried it back to their burrows so they could have a feast. 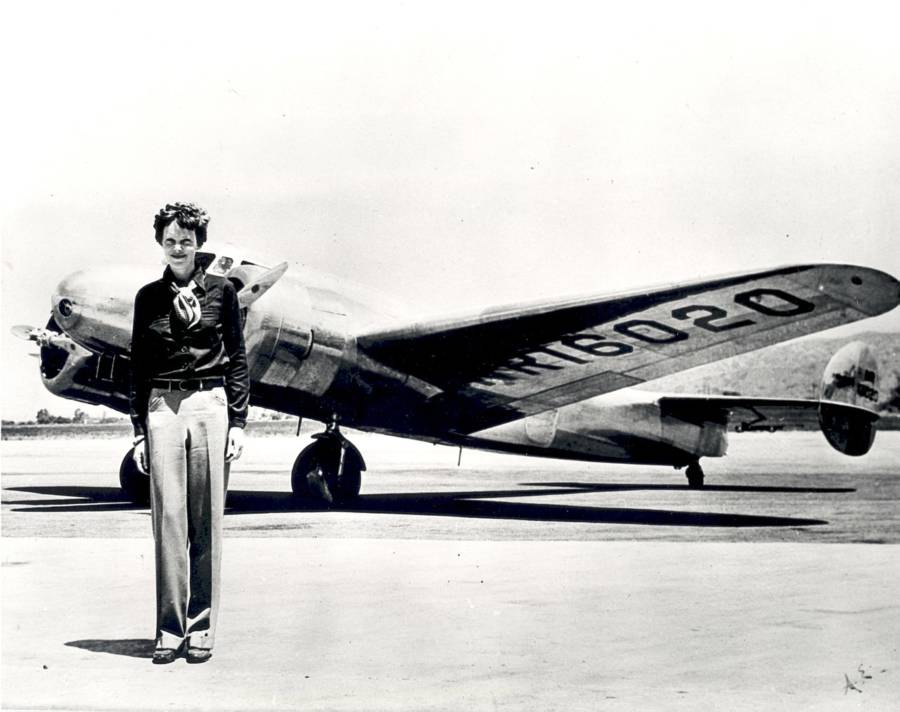 Wikimedia CommonsAmelia Earhart, pictured here shortly before her disappearance in 1937. While her exact fate has never been determined, some believe that Amelia Earhart was eaten by coconut crabs after crashing on an uninhabited island.

Coconut crabs don’t usually try to hurt people, but there have been exceptions. Humans are their only predators (aside from other coconut crabs), and when they’re targeted, they will strike back.

Some people who live on islands in the Pacific Ocean have found that out the hard way. While searching for coconut husks, some locals have made the mistake of putting their fingers into the crabs’ burrows. In response, the crabs would strike — giving people the worst pinch of their lives.

So there’s no question that a robber crab would attack humans if provoked. But would it eat one of us? If so, that leads us to one of history’s most bizarre mysteries: Did coconut crabs eat Amelia Earhart?

In 1940, researchers found a fractured skeleton on Nikumaroro Island that had been torn apart. It’s believed that this may have been the body of Amelia Earhart — the famous female aviator who disappeared somewhere over the Pacific Ocean in 1937. And if that body indeed belonged to Earhart, then some experts think she may have been torn apart by coconut crabs.

It’s worth noting that the mystery of what happened to Amelia Earhart has never been completely solved. But according to this theory, Earhart crashed on the uninhabited island and was left either dead or dying on its beach. Like the red-footed booby, Amelia Earhart’s blood may have lured the coconut crabs who were living in the island’s underground burrows.

A team of scientists ran a test in 2007 to see what the coconut crabs would have done to Amelia Earhart if they found her dead or dying body on the beach. They left a pig carcass at the site where Earhart may have crashed.

Just as they imagined might have happened to Earhart, the robber crabs emerged and tore the pig to shreds. Then, they dragged the flesh down to their underground lairs and ate it right off the bones.

If that indeed happened to Earhart, then she may have been the only person on Earth who was eaten by coconut crabs. But as horrific as this hypothetical death sounds, you probably don’t have to worry about something like this happening to you.

The truth is that coconut crabs often have more reason to fear humans than the other way around.

Can You Eat Coconut Crabs? 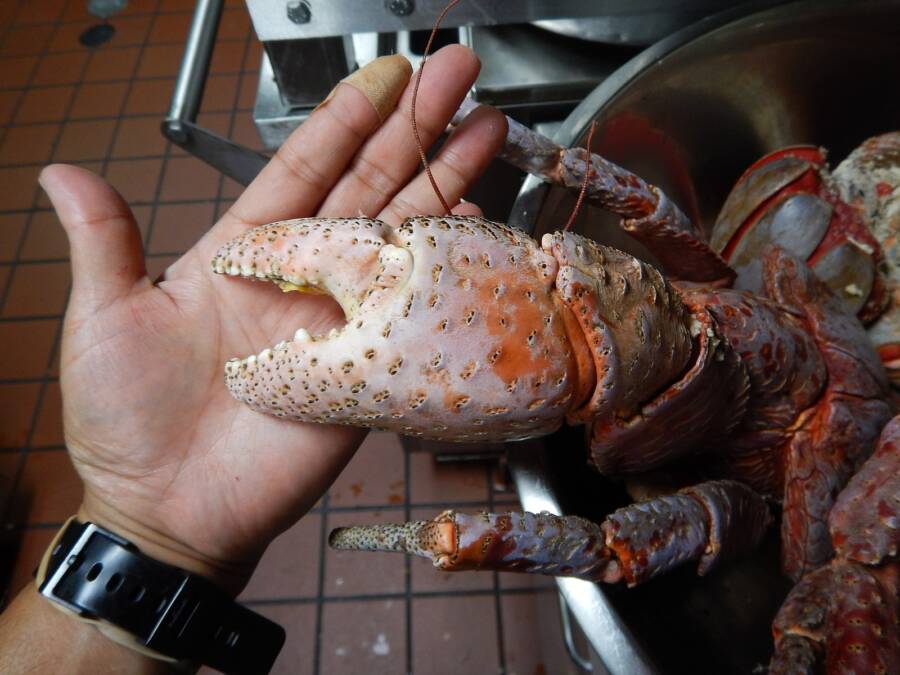 Wikimedia CommonsAs one might imagine, the coconut crab’s size means that this crustacean has plenty of meat.

For all the talk about this animal’s terrifying eating habits, some adventurous foodies might be curious as to whether they can eat coconut crabs themselves. As it turns out, coconut crabs are indeed edible for humans.

On some islands in the Indian and Pacific Oceans, these crabs are served as a delicacy or sometimes even as an aphrodisiac. So many locals have enjoyed eating these crustaceans for centuries now. And visitors on the islands have also enjoyed giving them a try. Even Charles Darwin once admitted that the crabs were “very good to eat.”

According to VICE, one way that locals on the Atafu atoll prepare this crab is by making a pile of coconut fronds, putting the crustaceans on top, covering them with more fronds, and then lighting the whole pile on fire. Then, they rinse the crabs in the ocean, put them on plates weaved from more fronds, and use coconuts to break open the shells of the crabs to get to the meat.

The coconut crab is said to taste “buttery” and “sweet.” Interestingly enough, the abdominal sack is reportedly the “best” part of the crab. To some, it tastes “slightly nutty” while others swear it tastes just like peanut butter. Some eat the crab with coconut, while others enjoy the crustacean by itself. Considering the coconut crab’s size, it makes a pretty filling meal on its own.

However, just because you can eat them doesn’t necessarily mean that you should. In recent years, the overhunting and overharvesting of coconut crabs have led to fears that they may be threatened or even endangered.

In addition, a few coconut crabs may be dangerous to eat — if the animals have fed on certain toxic plants. While most people eat the crustaceans without a problem, cases of coconut crab poisoning have occurred.

But considering how scary these animals are when they’re alive, it almost seems fitting that there’s a bit of a risk consuming them after they’re dead.

From the coconut crab’s massive size to its powerful claws, there’s no question that it’s one of the most terrifying and unique creatures on Earth. And for hundreds of years, this crustacean has certainly left a big impression on anyone lucky enough — or unlucky enough — to encounter it.

After learning about the coconut crab, take a look at the craziest types of animal camouflage. Then, check out the most dangerous animals on Earth.